Our travels a few weeks back through the lower Galil took us past a large built-up hill with palm trees on top that caught our attention, so we returned last week for a look. It’s Tel Megiddo, a significant archeological site. Megiddo sits strategically at the western end of the Yizra’el Valley, the vital West-East pass through the mountainous spine of the Land of Israel, connecting the coastal plain to the Jordan River Valley. In the ancient world this was a key section of the Derekh ha-Yam, literally the Way of the Sea, the main trade route between Egypt and Mesopotamia. This made Megiddo a pivotal city over which a succession of tribes fought for control during from the Early Bronze through the Iron Age. It became a royal city of Israel, fortified by King Solomon and the kings of the Northern Kingdom. The millennia-long contention over this central site probably recommended it to another religion as the location for an apocalyptic battle they call Ar-Mageddon.

The archeological remains are impressive and give you a vivid sense of the scale of life in those ancient periods, from walls of palaces to humble dwellings. There’s a large round central stone platform said to have served as an altar, an enormous stone-lined grain silo built down into the earth with spiraling ramps for access, extensive stables for horses, and a secure underground water supply. Walking the grounds, you can vividly imagine the people who inhabited this bustling town generation after generation, building on the structures left by those that came before them. Archeologists have uncovered twenty-six layers of settlement so far. This approach to life – building upon the past – impressed us. 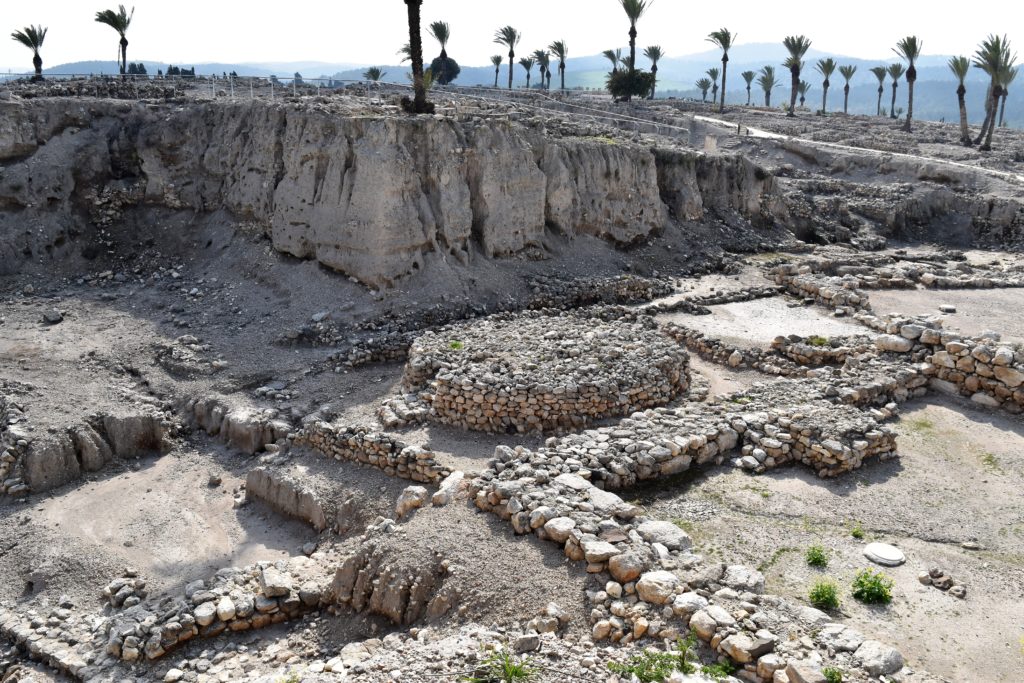 the temple area, starting from the fourth millennium B.C.E. 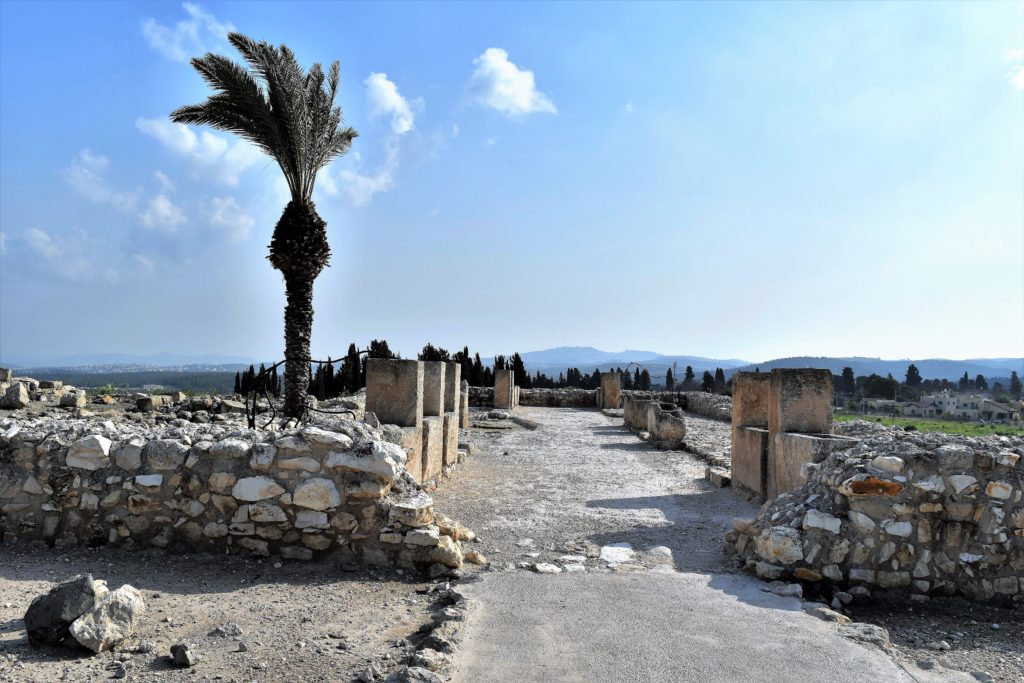 This week’s parashah begins powerfully with God calling to Moshe from the heart of the Mishkan:

The structure of the Mishkan was completed at the end of last week’s parashah, and now it actually works – HaShem calls to Moshe from the Holy of Holies. The Midrash Tanhuma clues us in to the significance of this moment of divine call:

The point is that the divine revelations from the Mishkan build upon the process of the Sinai revelation. It’s the same Voice. According to Rabbi Menachem Recanati, kabbalistic commentator of the early 14th century, the Mishkan is a kind of moveable Mount Sinai, a locus of ongoing revelation of Torah accompanying Israel through their desert journey. This is emblematic of our understanding of the nature of Torah revelation. What occurred at Sinai was not merely a momentary historical event. It was an irruption of the eternal Torah into human consciousness, so it remains continually revelatory.

To clarify, our approach to Torah interpretation differs, for instance, from the various schools of interpretation of the American Constitution, a document of a specific convocation at a specific historical time. Mere Original Intent, to determine and stick literally to the intentions of the framers, frozen in time, doesn’t encompass the robust richness of our interpretive method, nor does Originalism, Constructionism, Textualism or Purposivism. For us the Torah is eternally whole and revealing itself in its wholeness continually. According to Rabbi Menachem HaMeiri, the eternal Torah speaks to the needs of every generation and every generation discovers aspects of the eternal Torah that it needs (Introduction to Beit HaBehirah). The rabbinic tradition, carried on by those who have fully and responsibly apprenticed themselves to the Tradition, builds respectfully upon the revelations of the past while carefully discovering hiddushim, new interpretive insights in the eternal Torah that address contemporary issues.

According to R. Yaakov Leiner in his Beit Yaakov, an aspect of this ongoing revelation of divine Will applies to each of us in our lives as well. HaShem is constantly communicating with us in the events and encounters of our lives. To perceive and experience this we are encouraged to cultivate a sensitive and open consciousness, learning from each other all the time. In our Tal Orot meditation groups here in Israel, for instance, we find engaged members bringing new insights and deep awareness to our traditional practices all the time.

Here in Israel you sense the layers all around you – physical layers of civilizations and societies that came before, as well as a reshimu, residual layers of consciousness of human beings trying their best to figure out the mystery of what is going on here, in this weird reality we find ourselves in, that we inhabit together, sharing and building on each other’s awareness. It’s an aspect of the holiness of this special Land. 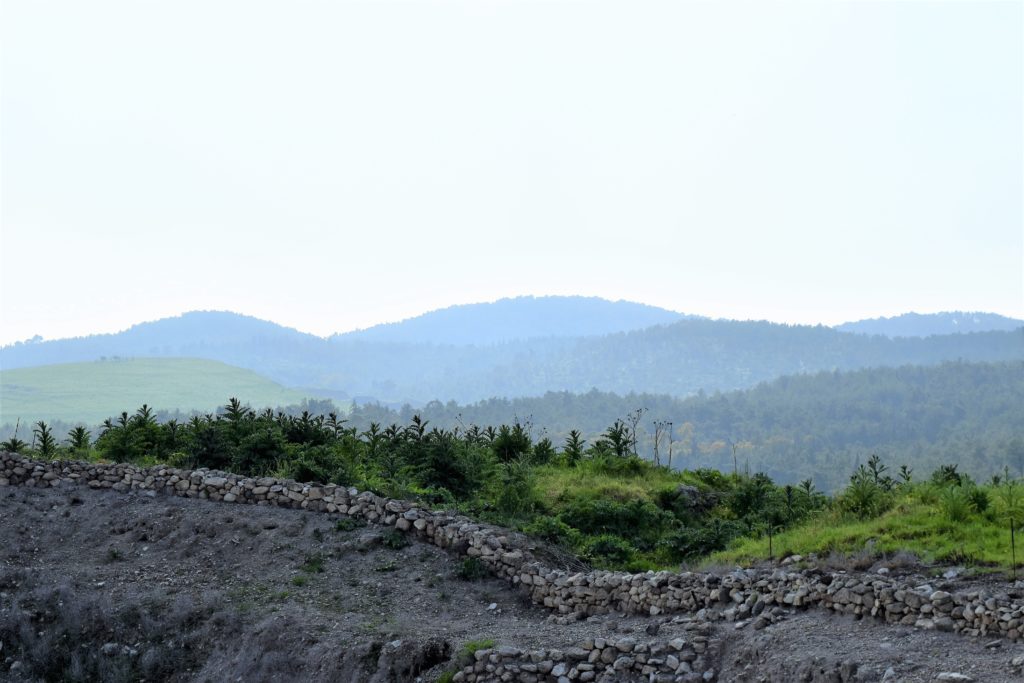 2 thoughts on “Something Old, Something New”