On Yom HaAtzmaut last week, one of the first beautiful days of this year’s late spring, we took a long walk to Mount Avnit in the Biriyah Forest, the next mountain over, not far from our home. We noticed signs pointing the way to the gravesites of Abaye and Rava, the great Amoraim whose numerous debates over fine points of halakhah are found throughout the Talmud. The path took us along the edge of the mountain, with breathtaking, heart-lifting views of the Upper Galil and the Hulah Valley. When we arrived we found the gravesites in a long cave, which included the grave of Rav Dimi, one of the Amoraim who traveled frequently back and forth from the Land of Israel to Bavel, present day Iraq, bringing the Torah insights of the sages of Israel. Nearby we found the gravesite of Rabbi Yehudah Nesiyah, son of Rabban Gamliel, grandson of Rabbi Yehudah haNasi. This is a more elaborate building above ground, befitting his status as a Torah leader of the family of the Nasi, descendants of Hillel the Elder, and ultimately of King David. On the walls were plaques with some of his teachings and references to him found in the Talmud, a public service provided at some of the more well-maintained gravesites of great Rabbis that helps us learn their Torah and continue the conversation, consciousness to abiding consciousness, in real-time.  One of the plaques included the following passage from the Gemara Ta’anit:

Rabbi Yehudah Nesiyah decreed a fast [to pray for rain during a drought]. He asked for mercy but rain did not come. He said: “how many generations there are from Shmuel [the prophet] of Ramataim until Yehudah the son of Gamliel. Woe to the generation in which [I] have been inserted. Woe to him to whom this has happened.” He became depressed – and the rain came.

The Land of Israel is a semi-arid chaparral climate, with a quite variable rainy season. Moshe Rabbenu alerts the Israelites as they are about to cross the Jordan River into the Land of Israel:

The Land to which you are crossing over to inherit is a land of mountains and valleys, drinking water from the rain of the heavens. A land that HaShem your God cares for: the eyes of HaShem your God are constantly upon it from the beginning of the year until the end of the year. If you really hearken to the mitzvot that I am commanding you this day, to love HaShem your God and to serve Him with all your heart and all your soul, I will give the rain of your land in its time, the early and the late, and you will gather your grain, your wine and your oil.

This last winter happened to have abundant rainfall, a real blessing. But it followed many years of near-drought conditions, prompting the Rabbanut to call for public prayers for rain, as was done in the Talmudic period. The Gemara gives examples of some of the great rabbis and rainmakers whose prayers for rain on such occasions were reliably answered and who were prized by their communities, and some from the later generations who struggled – like Rabbi Yehudah Nesiyah. It was a very public embarrassment that his prayers were not answered, and he felt he let down his community as well as his illustrious lineage, and the tradition of rainmakers (see previous posts here and here about Honi) back to the great prophet Shmuel, the first whose explicit prayer for rain is immediately answered (1 Sam. 12: 18). But it is precisely when Rabbi Yehudah gives up and feels down-hearted that the rain comes!

I love this passage – in itself a great teaching. It’s when he lets go of self and all pretensions of lineage, in broken-hearted self-effacement, that the heavens open.

“These are the generations of Heaven and Earth when they were created… Before any bush of the field was on the earth and before any grass of the field sprouted, for HaShem had not caused it to rain and humanity was naught to work the ground (Gen. 2:4-5).” It seems possible to understand that all the worlds, at every moment, receive flow and life from the Creator, blessed be He. And human being is the one to arouse the divine flow to flow to all the worlds. When a person wants to arouse a new flow upon all the worlds he needs to adhere himself to the Naught, which is the level at which he is not contracted in the worlds at all. When a person is null in existence and attaches his thought to Nothingness, as it were, after this new divine flow comes to all the worlds that had not existed before.

Rabbi Levi Yitzhak reads the biblical phrase “and humanity was naught,” in context meaning simply that mankind didn’t yet exist, also as a kabbalistic allusion to the condition for bringing blessings into the world — through the adherence of consciousness to the Sefirah Keter, the divine Nothing. This is the highest revelation of God the Infinite, so full of divine being that it overwhelms consciousness, so ungraspable that to the human mind it appears as nothing, though it is absolute fullness of being. To adhere to this state of mind beyond mind requires total release of the limitations of selfhood, which allows new energy – or in the case of the passage in Genesis, new rain – to begin to flow. So, too, for Rabbi Yehudah Nesiyah – his humble self-effacement in response to his apparent failure is what opens the heavens and brings new rain.

And this is a potent reminder of the truth stated in this week’s Torah portion, in which HaShem says “for the Land is Mine (Lev 25:23).” This is the ultimate message of the mitzvot of Shemittah, the seventh Sabbatical year during which we cease cultivating the fields and release loans, and Yovel, the fiftieth Jubilee year during which agricultural work ceases, slaves are released and all property in the Land of Israel returns to its original owners from original distribution of land in the time of Yehoshua. Rabbi Yaakov Leiner explains that these mitzvot teach not only release of our pretension to ownership of property but release of our pretension to ownership of ourselves. Not only does the Land belong to God, but each one of us belongs to God. “He made us, we did not — we are His (Ps. 100:3),” and not only our bodies, but our minds and every thought and feeling, even our most spiritual inner promptings, are abilities granted us by God at every instant (Beit Yaakov, Behar, sec. 16).

God’s ownership of the Land of Israel, and our lack of ownership and, instead, our responsible custodianship, is also what bestows kedushah, sanctity, on the Land, expressed halakhically in the requirements of the mitzvot of tithes and Shemittah.  An aspect of the mysterious quality of kedushah is that the sacred is not instrumental towards any utilitarian purpose and cannot be possessed: it is valued in and of itself. Maimonides in the Mishneh Torah explains that this is why Jerusalem and the Holy Temple have abiding kedushah – their sanctification was for their time and all time, whereas the original sanctification of the rest of the Land of Israel in the time of Yehoshua applied only to that time and not all time. The sanctity of Jerusalem and the Holy Temple are by virtue of the divine Presence, which can never be nullified. But the sanctification of the Land of Israel by Yehoshua was by conquest, and what is gained by conquest and violence can be lost through conquest and violence by others, as was the case in the Babylonian conquest. But Maimonides goes on to explain that in the return of Ezra and the Israelite exiles to the Land of Israel from Babylonia, a return not through conquest and violence but peacefully through consent by the Persian empire under the Persian monarch Cyrus, the sanctification of the Land they effected was for their time and all time, expressed halakhically in the fact that, since that time, the mitzvot of tithes and Shemittah are in effect in Israel endlessly, to this day. This sanctity by consent cannot be lost due to any subsequent violent conquests by Romans in the first century or Arabians in the seventh century or Europeans in the eleventh or twelfth centuries. (Mishneh Torah, Hilkhot Beit HaBehirah 6: 15, 16; Shemittah ve-Yovel 12:16; To’ein ve-Nit’an 13:1,2)

It’s significant that the officially sanctioned return of our nation to our Land in 1947 was also not by conquest but by majority consent of the nations of the world in one of the few decent acts of the United Nations. Subsequent wars were not wars of conquest but of defense. This also points us towards the only way in which any real and lasting peace can come about in our Land – through peaceful reconciliation and mutual understanding, not by violence and imposition. That seems a long way off. But the humility of Rabbi Yehudah Nesiyah teaches us that, when we put ourselves aside and open to God’s higher purpose, creative blessings flow and anything is possible.

The view looking out from the grave to the east 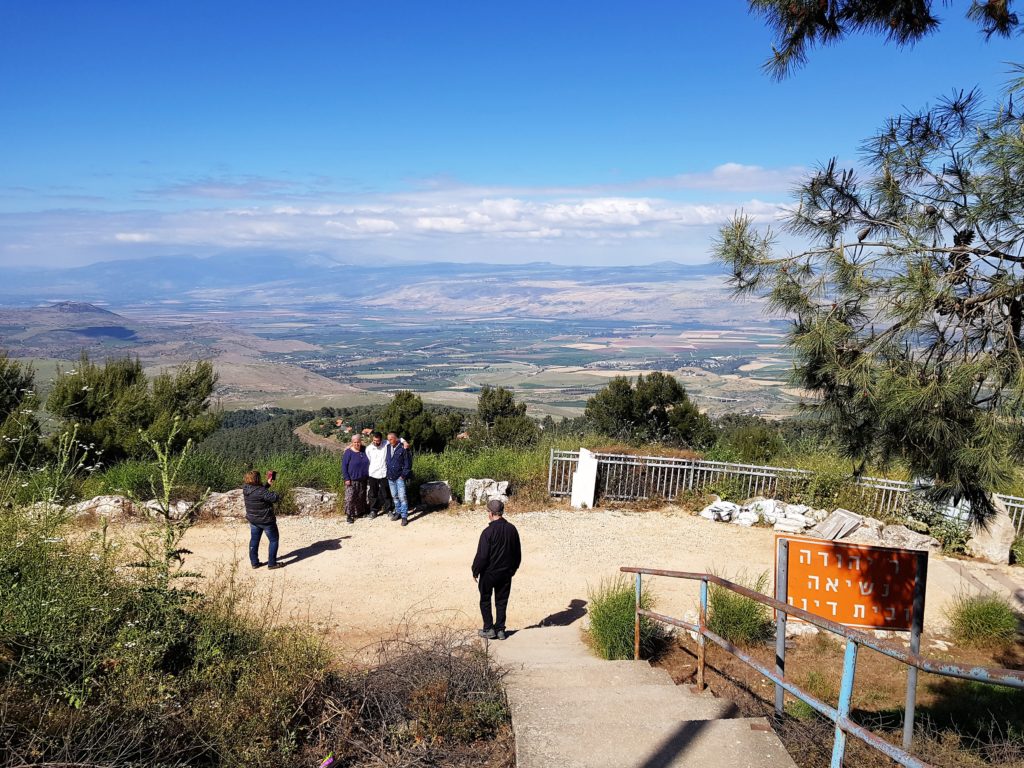 This family chose to have their Yom HaAtzmaut mangal (barbecue) by the tombs of Rava and Ashi, Rav Dini, and Rabbi Yehudah Nesiyah. What a view!

2 thoughts on “Nothing Doing”