We’re in a heatwave right now in Israel, with temperatures expected to climb to the 40 degrees Celsius range, over 100 Fahrenheit, by the end of the week. In anticipation of the heat accompanied by strong winds, municipalities all over Israel have banned the bonfires that have become customary in celebration of Lag BaOmer. We’re not optimistic everyone will comply. Lag BaOmer seems to bring out a pyromaniac spirit in some boys of all ages, and their penchant for burning anything combustible, even toxic materials, and without regard to safe fire control, has become a serious threat to health and property in recent years. It’s ironic that the great Torah sage who they are supposedly honoring with this foolishness would likely be, and probably is, appalled.

Rabbi Shimon bar Yochai is traditionally associated with Lag BaOmer – it’s considered the day he and his son Rabbi Eleazar left the cave in which they had hidden from the Romans, and it’s traditionally considered to be his yahrzeit, the day of his passing. Both events have a transcendent dimension. According to the Gemara Shabbat (33b-34a), Rabbi Shimon was overheard criticizing the Roman government that was occupying Judea at the time. A warrant was issued for his arrest and execution, so he hid in a cave with his son, Rabbi Eleazar, for thirteen years. They spent the entire time learning Torah together, such that when they were finally able to safely leave, they had reached supremely high levels of scholarship and spiritual awareness. The event of Rabbi Shimon’s passing is described in detail in the Zohar in the Idra Zuta, in which he attains ultimate enlightenment. So Lag BaOmer has taken on this extra dimension of a day of great Torah wisdom by virtue of its association with Rabbi Shimon bar Yochai – antithetical to the sometimes unruly and superstitious behavior that goes on in his name.

Rabbi Shimon is distinguished in the Gemara for his total commitment to constant Torah study, not wasting time in frivolous or even practical worldly activities (Berakhot 35b). His legal methodology throughout the Gemara emphasizes thoughtfulness and meaningfulness. In numerous halakhic debates with his colleague Rabbi Yehudah, for instance, while Rabbi Yehudah typically decides the halakhah based on external action and result, which he considers the proper concern of the law, Rabbi Shimon consistently advocates for considering motive and intent of the agent, and the deeper purpose of the mitzvah or halakhah itself.

His insightful concern for inner mental process extends to aggadic interpretation, too. For instance, our parashah this week begins with the blessings that will be bestowed on Israel if we follow the Torah, and includes the blessings:

And I will bestow peace in the land, and you will lie down and not be afraid, and I shall cause harmful animals to cease from the land, and the sword shall not pass through your land.

The midrash Sifra brings one of the debates of Rabbi Shimon and Rabbi Yehudah, on this verse:

How great are Your deeds, HaShem, Your thoughts are exceedingly deep. A crude person does not know, and a fool will not understand this. When the wicked flourish like grass and all the workers of iniquity sprout, it’s to destroy them forever.

According to Rabbi Shimon’s read of the Psalm, the temporary success of the wicked is a cathartic process that allows their behavior to be expressed out in the open, where others can realize and oppose their evil, and some of the wicked may come to reflect and realize it themselves and change their ways. A contemporary example is the Muslim world’s reaction to ISIS, seeing the Islamist version of Islam carried out to its ultimate brutal, depraved term, which disgusted most Muslims. This may yet arouse awareness and opposition to the evil of other violent Islamist regimes and jihadi groups such as Iran, Syria, Hezballah, Hamas and Boko Haram.

A concern for motive and intent is also at the heart of the statement that got Rabbi Shimon bar Yochai in trouble with the Roman authorities. According to the Gemara Shabbat 33b:

Rabbi Yehudah, Rabbi Yosi and Rabbi Shimon were sitting together, and Yehudah ben Gerim was sitting with them. Rabbi Yehudah opened the discussion and said: “how fine are the deeds of this nation [Rome]. They built marketplaces, they built bridges and they built bath houses.” Rabbi Yosi was silent. Rabbi Shimon ben Yochai answered and said “all that they built, they only built for their own sakes. They built marketplaces to place in them harlots, bath houses for their pleasure and bridges to collect taxes from them.” Yehudah ben Gerim went and related their words, and they were heard by the Roman government. They said: “Yehudah, who exalted, shall be exalted. Yosi, who was silent, shall be exiled to Tzippori. Shimon, who disparaged, shall be executed.” He and his son fled and hid in the Beit Midrash… They hid in a cave. A miracle occurred: a carob tree was created for them, and a spring of water. They removed their clothes and sat up to their necks in sand and studied all day. When it was time to pray they clothed themselves and prayed, then removed their clothes again so they wouldn’t wear out.

Forced to run and hide, he and his son use the crisis as an opportunity to live pure lives of the mind, totally immersed in the fire of Torah. Later, when they safely leave the cave, Rabbi Shimon is prompted to apply his deepened awareness to helping a nearby town determine where impurity is hidden underground, to enable Kohanim to navigate a main road that had once been a partial burial ground.  Rashi says he used a supernatural strategy, Tosafot says he used a rational, entirely natural method. Either way, Rabbi Shimon had developed a refined sensitivity and the desire to use his powers for good. In an interesting current parallel, it was revealed this week that one of the ways the Israel Defense Forces discovered the underground attack tunnels dug by Hezballah to try to infiltrate Israel was with the help of a reclusive kabbalist from this area, who used his clairvoyant skills to accurately locate all the tunnels along the northern border and the border with Gaza, locations which were later confirmed and neutralized by the engineering corps.

Throughout the Zohar Rabbi Shimon bar Yochai is called by his students בוצינא קדישא, “the holy flame.” His fire is a passion for Torah burning inside, not outside. He calls us to a committed and thoughtful approach to Torah life.  More appropriate, then, to celebrate his life and his eternal life, not by running to chaotic crowds surging to get physically close to his gravesite or setting dangerous and unhealthy bonfires, but by sitting down peacefully, wherever we are, and communing with him mind to mind, learning his profound Torah. The fire’s inside. 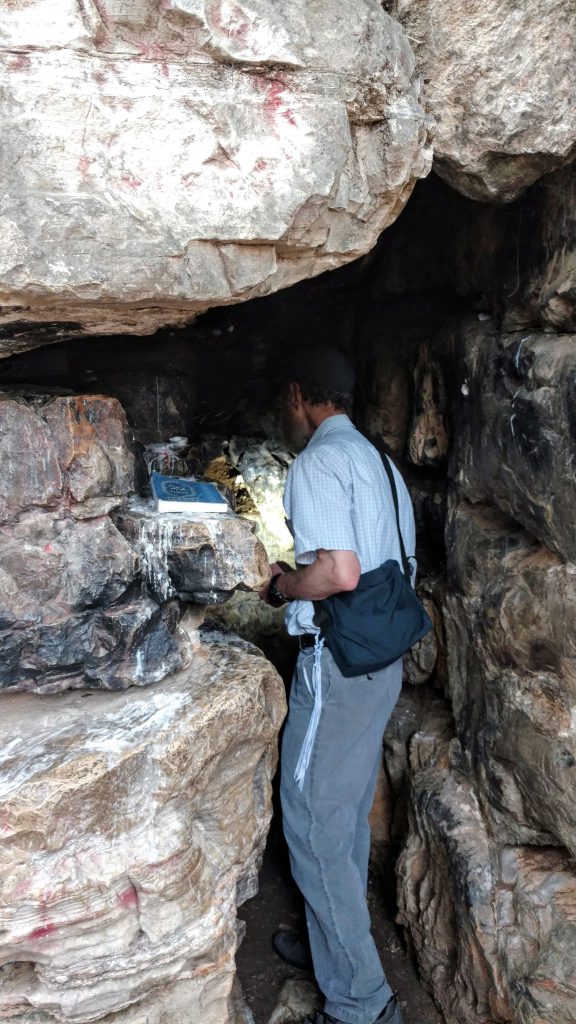 Exploring the cave of Rabbi Shimon Bar Yochai in Pekiin 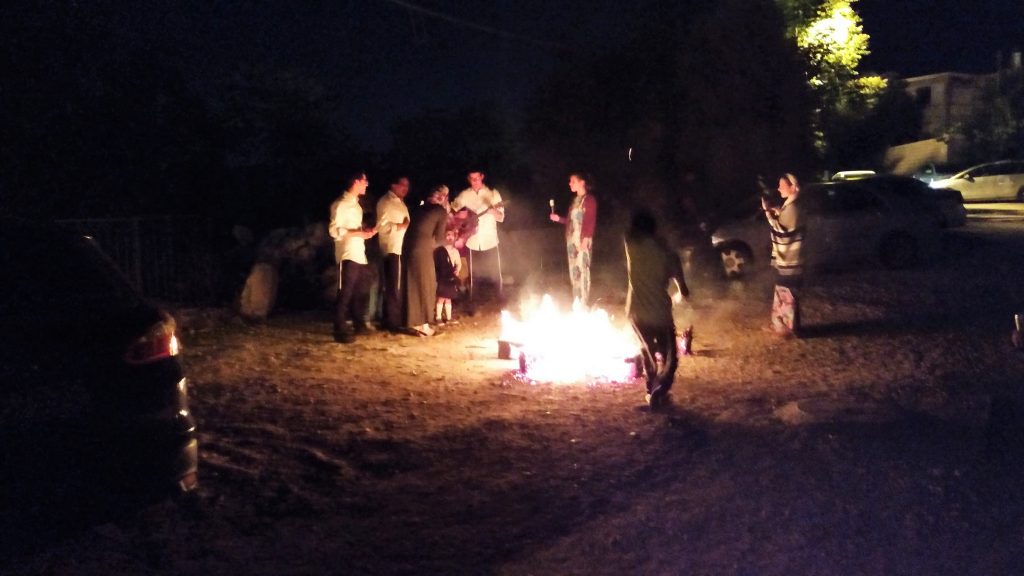 A calmer contained bonfire from two years ago, without the threat of high heat and winds