Since we’re relatively new to the neighborhood, I’m just learning the customs of the local Kehillah (and starting to get familiar with Moroccan nusach). So I asked the Rav where to get the Hoshanot, the bundle of five willow branches used for the service of Hoshana Rabba – will they sell them at Shul or I should buy them in town? He looked at me quizzically, then realized what I was asking and said “you don’t need to buy anything. Just go around to the garden of the Beit HaKnesset and pick what you need.” There’s something delightfully real and natural about that, which is true of much of spiritual reality in Israel.

Hoshana Rabba is the culmination of the Teshuvah process with which we have been engaged since the beginning of Elul. In the time of the Beit HaMikdash, it was also the climax of the water-drawing and libation ceremony that was a service asking God for sufficient rain for the year. Today we perform this service verbally and non-verbally through a poetic litany of prayers offered as we circle the Sefer Torah on the bimah in the Beit HaKnesset and by the beating of the Hoshanot on the earth.

Rain is always an issue in Israel. Northern and central Israel is a chaparral climate, and southern Israel is desert, so the water balance is delicate. Israelis pay attention to the level of the Kinneret, a major source of fresh water for the country, fed by the Jordan River and by rain in the northern mountains. Israelis are also generally careful about water conservation and have been pioneers in innovative methods for irrigation and desalination.

Water consciousness also has a spiritual dimension. In Jewish tradition, adequacy of rain is taken as a barometer of our relationship with HaShem. During Hol haMoed Sukkot we visited the sacred burial sites of Honi haMe’agel (Honi the Circle Drawer) and his grandchildren Abba Hilkiah and Hanan haNechbah, who together with their wives were renowned as “rain-makers,” righteous, no-nonsense people of such intimacy with HaShem that in times of drought the nation turned to them to ask HaShem for rain directly and their requests were usually fulfilled. Communing with them is itself a directly intimate experience.

So on Hoshana Rabba our prayers for rain are also prayers for spiritual intimacy with HaShem. But the ceremony of the Hoshanot at the end of the prayers, beating the five willow branches on the earth, is mysterious – how does it fit in? Moroccan minhag follows the custom of the Ari z”l, Rabbi Yitzhak Luria, the great kabbalist of Tzfat, to beat the Hoshanot on bare earth five times. As a ritual action it has an ancient, primitive quality. But the kabbalists interpret it deeply. In Sha’ar haKavanot Rabbi Hayyim Vital notes that the beating of the willows on the earth is done by touching the bundle to the earth and then lifting up, and since the willow leaf is shaped like lips, this suggests that one of the inner intentions is a set of five kisses. This process sweetens all judgment and brings the Tal Orot, the Dew of Lights, the flow of refreshing divine consciousness from the very highest level of divine emanation, to our world.

Dr. Matthew Budd, a distinguished member of our Tal Orot society and a dear friend, has suggested a related kavanah for the service of the Hoshanot. Water is archetypally associated with the unconscious. The willow, growing by the banks of rivers and streams with strong, water-drawing roots, symbolizes healing that reaches deep into the hidden sources of the spirit. Hoshana Rabba is the culmination of the process of Teshuvah by which we extend that process even deeper, not just to purify and rectify our conscious thought processes and intentional actions, but to suffuse even the unconscious source of mind with Torah. This reading echoes Rabbi Yaakov Leiner’s interpretation in Beit Yaakov, that the divine service of Sukkot reaches to levels beyond the grasp of conscious thought (Parashat Emor, secs. 53, 63).

May we all be blessed for the year ahead with beneficial rain in all its senses – for a year of healing, prosperity, inspiration, creativity and closeness to HaShem and to each other. 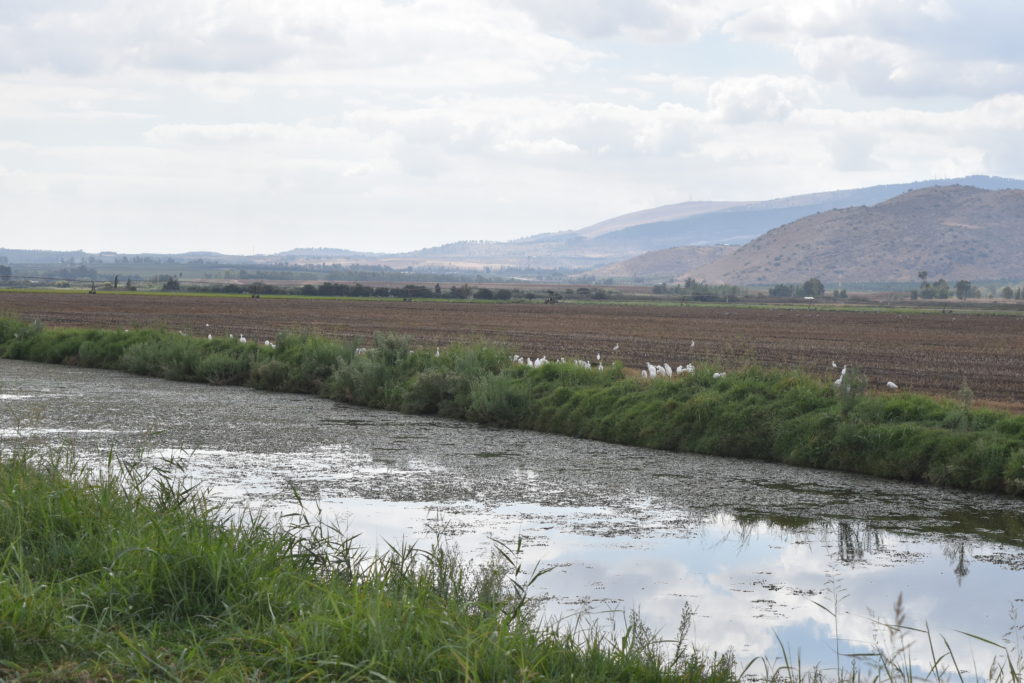 Who is observing whom?
At the Hula Valley

One thought on “Rain Dance”