This week we visited Agamon ha-Hula, the nature preserve in northern Israel that is one of the premier birding spots of the world. Israel’s location puts it at the pivotal center of the migration routes for the majority of birds from Asia and Europe on their way back and forth to Africa. The protected wetlands of the Hula valley, running between the mountains of the Galil and the high Golan plateau, makes it an ideal refueling stop for exhausted birds. Birders from all over the world flock to the Hula to see a vast variety of species all passing through one narrow pathway along the Jordan river.

At this point in the fall migration, the featured bird is the Common Crane. It’s enormous (230 cm wingspan), with gray plumage and black flight feathers. It flies with neck stretched straight forward and long spindly legs straight back. The Agamon Hula website advises to time your visit to be present just before twilight to view them, and even as we were expecting something special, we were astonished by what we saw and heard. As the sun began to set over the mountains of the Galil and the sky was glowing gold, thousands of these majestic birds came flying in from the north in long, shifting lines, filling the sky and setting the valley ringing with their high-pitched honking. We were stationed near the central lake of the preserve, and row after row of cranes came drifting very slowly down in front of us. As each bird neared the shallows they let their long legs dangle, totally at ease, as they floated gently down to land in the midst of thousands of their raucous welcoming neighbors. Each bird found its place, sheltering close together in the vast flock as night fell. 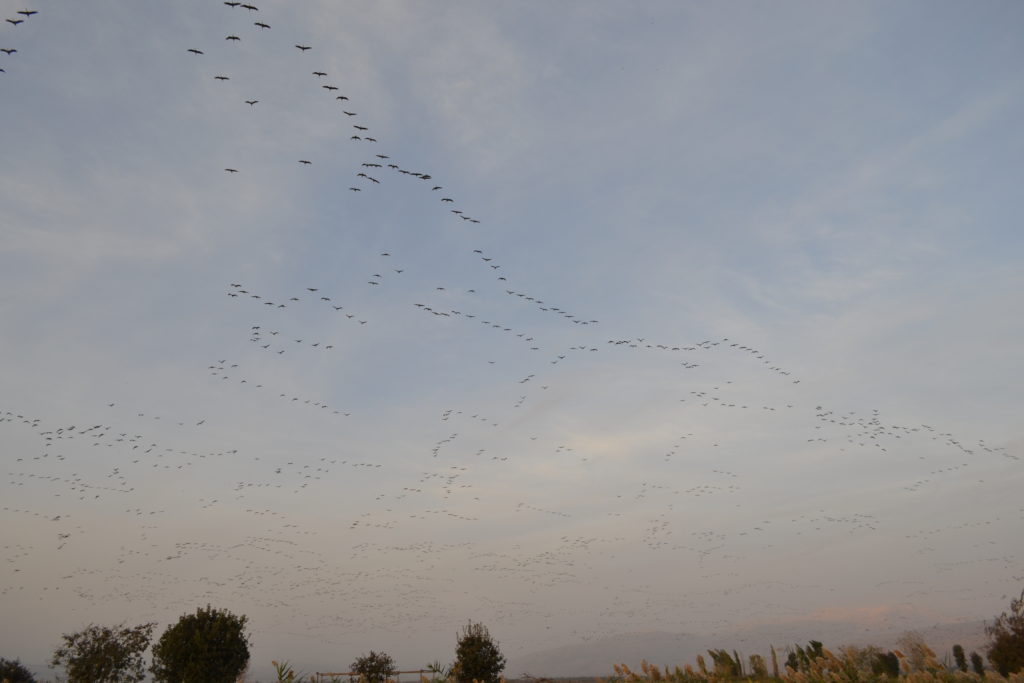 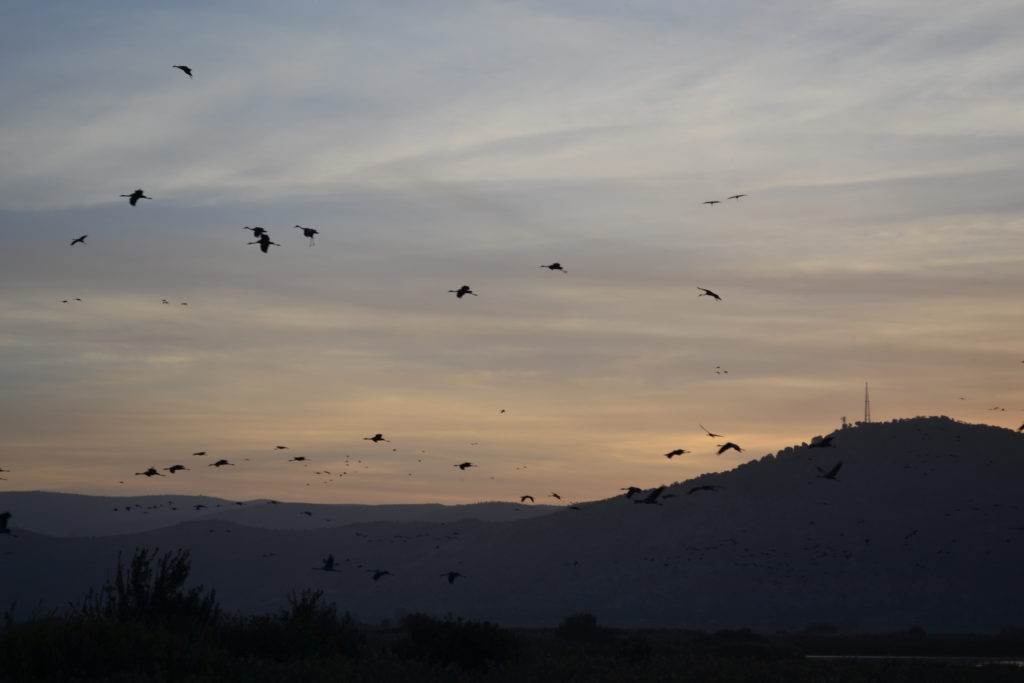 Primeval ritual, thrilling yet serenely peaceful – this experience aroused heart-opening emotions that seemed to come from some ancient source deep in the genome, shared as a fellow creature on the planet Earth. It also touched us as Jews, wanderers on our own long migration that begins this week with HaShem’s call to Avraham and Sarah to open this week’s parashah:

HaShem said ‘Get yourself going, from your land and your birthplace and your father’s house, to the Land that I will show you.

Avraham and Sarah begin the great journey that issues in a family and a nation committed to human moral and spiritual development.

Rabbi Moshe Cordovero in his monumental Pardes Rimonim (22:4) expounds a midrash from Sefer ha-Bahir (sec. 190), the first collection of kabbalistic midrashim, on the overall goal of our spiritual progress that begins with Avraham and Sarah and results in the Jewish people. He explains that each of us has a specific personality that tends to favor a specific moral inclination. Some of us, like Avraham, prefer to act with love and kindness in all situations. Others, like Yitzhak, are better at justice and judgment. Yaakov looked for harmony. The overall goal of Torah, though, is to help each of us develop a comprehensive consciousness that combines all qualities through all the Mitzvot, to be able to embrace truth in all its complexity. Love is not an appropriate approach to all situations, nor is judgment, nor any single quality. Through an expansive awareness that gives attention to everyone and everything around us in detail, an awareness cultivated through Torah learning and Mitzvah practice, we can attain truth. And from truthful awareness that embraces all individuals in detail we can reach the goal of Torah, which is to act to cultivate Shalom, a deep, comprehensive peace in which everyone and everything finds their proper place.

To be fair to Avraham and Sarah, with all due respect to the midrash in the Bahir, I think it is precisely this comprehensive awareness that they worked hard to cultivate in their own spiritual progress. Each of their adventures calls forth a different quality to deal with a complicated situation in detail. The fact that the Torah itself tells their story in great detail, telling us how many kings fought each other and who said what to whom, models this vision. The fact that Avraham is told to leave his land, birthplace and father’s house, in increasing levels of specificity, conveys this vision. According to another, competing midrash in the Bahir (secs. 77-78, based on Baba Batra 16b), after all their trials and tribulations, Avraham attained a comprehensive peace in the end.

Our world at this time is going through a period of increasing violence. Even in more relatively stable societies there has been a coarsening of public discourse and growing alienation and polarization among insular groups divided along ideological lines. People talk at each other, not with each other. Anger and resentment, those most toxic emotions, are regarded as justified, even violence is accepted as justifiable, while compassion and empathetic understanding are forgotten. The pain and rancor of the election process that just concluded in the United States was a consequence of people ignoring each other’s needs for a long time now. And the rancor is not subsiding. Even on many college campuses, which should be oases of thoughtful discourse and mutual care, students are being encouraged to demean each other and shout each other down rather than respect each other. We are not listening to each other. To listen to another person means putting yourself aside for a bit and seeing the world from someone else’s viewpoint. This is especially challenging when you don’t agree with the other person, but all the more morally and spiritually powerful for that. It’s time for people of decency to recommit to the virtues of compassion, empathy and understanding. The thousands of Common Cranes on migration through the Hula valley welcome each other with joyful calls as they come to roost together for the night, each one finding their place peacefully among their neighbors. We should be able to do the same.

And each person shall settle beneath his vine and beneath his fig tree and no one shall make them afraid, for the mouth of the God of hosts has spoken.

5 thoughts on “It’s All in the Details”