On Wednesdays Tzfat hosts an open-air Shuk, a bustling farmers’ market and flea market. Fruit and vegetable stands are piled high with colorful produce. There are tables with all kinds of spices and nuts and baked goods. There are racks upon racks of women’s, men’s and children’s clothing, tables of shoes, rugs and blankets and curtains and housewares, gaudy jewelry and kitschy toys. Vendors hawk their wares in Hebrew and Arabic, and Jewish and Arab men and women mingle amicably up and down the aisles. A customer at a table of housewares, who couldn’t find what she was looking for, asked the Arab owner if she could come to his shop on Shabbat to pick it up. The owner joked: “Shabbat? Not Shabbat. I’m Shomer Shabbat.”

It’s not always this way, and wasn’t always this way. Already in the household of Avraham and Sarah there is strife with Hagar and her son Yishmael, archetypal progenitor of the Arab peoples. In this week’s parashah, the birth of Yitzhak threatens the standing of Yishmael, who acts out:

“And Sarah saw the son of Hagar the Egyptian who gave birth for Avraham jesting.”

With the word “מצחק– jesting,”  the Torah is punning on the name Yitzhak, “he will laugh,” but leaves vague the details of what actually happened. The Rabbis try to figure out what it was that Yishmael did that prompted such a harsh reaction from Sarah — to demand that he and his mother be banished from the home. The word “jesting” here must be a euphemism, but for what?

Rabbi Shimon bar Yohai says “There are four cases expounded by Rabbi Akiva for which my words seem more appropriate than his.” [The first is:] Rabbi Akiva expounded: “And Sarah saw the son of Hagar the Egyptian who gave birth for Avraham jesting.” The jesting referred to here is nothing other than worshipping idolatry…” Rabbi Eliezer, son of R. Yosi ha-Galili says “the jesting referred to here is nothing other than licentiousness…” R. Yishmael says “the term jest means nothing other than bloodshed…” I say: Heaven forbid that there would occur such things in the home of that righteous man [Avraham]. He of whom it is said “I know him, that he will command his children and his household after him, and they will keep the way of God to do righteousness and justice… (Gen. 18:19)” – could there have occurred idolatry, licentiousness or bloodshed in his home? Rather, the jesting spoken of here is concerning the issue of inheritance. When our father Yitzhak was born to Avraham our father everyone rejoiced and said “a son is born to Avraham, a son is born to Avraham who will inherit the world and take two portions.” Yishmael laughed in his mind and said “don’t be fools, don’t be fools! I’m firstborn and I get two portions.” For from [Sarah’s] response you learn: “the son of this serving woman shall not inherit with my son, with Yitzhak (Gen. 21:10).”

Rabbi Shimon bar Yohai’s reading does seem more reasonable in context. The other Rabbis magnify the misbehavior of Yishmael to explain Sarah’s reaction, but the result impugns the reputation of Avraham and Sarah and their entire mission of ethical education. God Himself has testified that in Avraham’s family and home there is righteousness and justice. But in defining the “jest” not as a euphemism for an act of violence but literally as laughter, mental laughter no less, at those who rejoice for the birth of Yitzhak, and Yishmael’s insistence that he will still receive the firstborn inheritance from Avraham, the question returns: what was so terrible about Yishmael’s legal challenge that it provoked Sarah to demand that he and Hagar be banished? The more reasonable Yishmael’s complaint, the less justified Sarah’s reaction.

We can ask this a different way. What would have been the best response of Yishmael to the birth of Yitzhak and his concern over inheritance? He could have rejoiced to have a brother. If he had concerns over what this would mean for his own status and inheritance he could have discussed it with his parents. The discussion would have included an explanation, not just of inheritance law and finances, but of the moral and spiritual vision for which this family stands, and their destiny to help humanity attain this vision. Even if, in the end, Yishmael would have to come to terms with his position vis a vis Yitzhak, it would be as a valued member of the family. Instead, Yishmael reacts with jealousy and stands apart, mocking and insisting on his rights. This isn’t crude violence, but Sarah detects a poisonous attitude that will lead to danger. The theme of jealousy over inheritance is a central thread of the book of Genesis. It runs through the relationships of Yitzhak and Yishmael, Yaakov and Esav, and the twelve sons of Yaakov, only resolving when the brothers reconcile with Yosef. In the world at-large, it hasn’t resolved yet.

Emmanuel Levinas, in his book Difficult Freedom, addresses the pathologies in our relationships with the other, and identifies the paths to healing. He observes incisively that:

… Violence is not to be found only in the collision of one billiard ball with another, or the storm that destroys a harvest, or the master who mistreats his slave, or a totalitarian State that vilifies its citizens, or the conquest and subjugation of men in war. Violence is to be found in any action in which one acts as if one were alone to act: as if the rest of the universe were there only to receive the action; violence is consequently also any action which we endure without at every point collaborating in it. (p. 6)

Unilateral action, imposing one’s view on others, insisting without listening to the other, are all forms of violence. Even if someone thinks their ideas are correct and their cause is just, if they seek to force their views on others, it’s violence. And this violence of attitude and violence of words leads to violent actions. These days, the venerable traditions of civil debate and peaceful civil disobedience in Western societies have been hijacked by aggressive interest groups. Most distressing, some university faculty and administrations condone or espouse the violence of strident unilateralism, shouting down or muzzling their opponents, a moral immaturity with dangerous consequences.

Levinas suggests the antidote to such violence:

The banal fact of conversation, in one sense, quits the order of violence… This commerce which the word implies is precisely action without violence: the agent, at every moment of its action, has renounced all claims to domination or sovereignty, and is already exposed to the action of the Other in the way it waits for a response. Speaking and hearing become one rather than succeed on another. Speaking therefore institutes the moral relationship of equality and consequently recognizes justice (pp. 7-8).

Conversation and commerce, turning to each other, merging together, sensitive engagement with the other on equal terms, speak and listening to each other in harmony and justice – these are the keys to healthy relationships and a healthy society. This is the moral vision that distinguishes the family of Avraham.

Shimon Peres, alav ha-Shalom, envisioned a new Middle East where Israel and her Arab neighbors would be drawn to work together on ambitious high-tech projects to advance human civilization together. Looking out at the Middle East today, that seems overly optimistic and naive. But even the commerce and conversations of a low-tech, old-time Middle Eastern Shuk on a Wednesday in Tzfat can do a little bit to facilitate brotherhood and sisterhood among the children of Avraham. 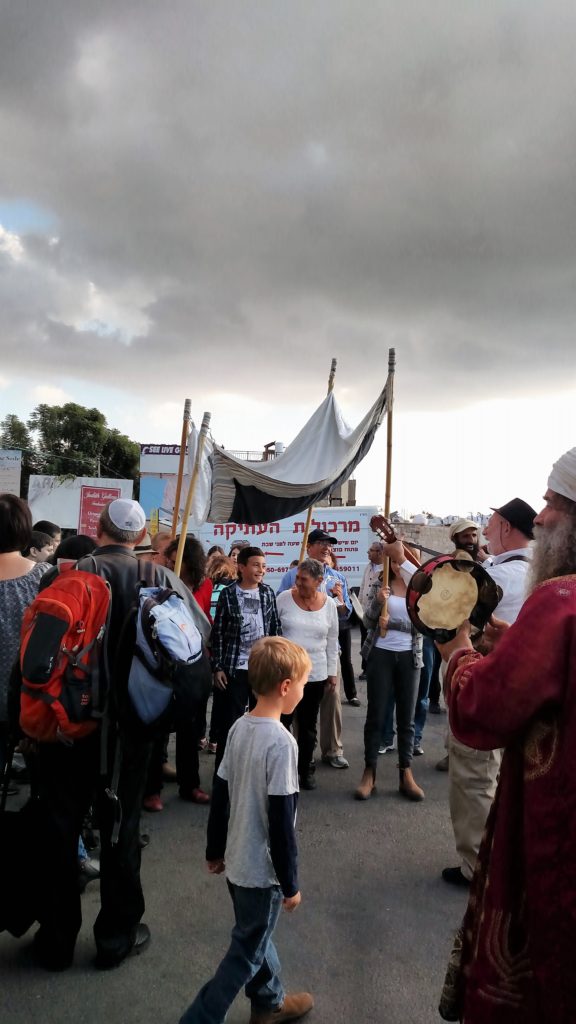 Reminder of classes and events in Israel and the states:

One thought on “Our Big Tent”