This week Israel preemptively assassinated the leader of Islamic Jihad in Gaza who had been planning a series of attacks, and the terror organization is responding with barrages of rockets against civilians in southern and central Israel. According to accounts, Israel had warned the terrorist leader repeatedly and waited to act until it was clear that attacks were imminent. Israel has been dealing with the violent terrorists of Gaza for years with a restrained wait-and-see policy, acting, decisively, only when deemed necessary. Though frustrating to Israelis who live within range of the rockets and other violent and destructive behavior of the residents of Gaza, there are strategic reasons for this waiting, which I’ll leave to the military and political experts. But vigilant waiting is also a theme and a value in this week’s parashah.

The parashah opens with a puzzling set of verses. God appears to Avraham Avinu as he sits in the opening of his tent, recuperating from Brit Milah. Avraham sees three strangers, who turn out to be angels, and runs to meet them – yet he was in the midst of a visit from God. Then:

And he said ‘A-donai, if I find grace in Your sight, please do not pass by your servant.’

To whom is this addressed? Rashi brings two options:

To the most senior [of the strangers] he spoke, and called them all “sirs,” and to the most senior he said “please do not pass by…” And since he didn’t pass by, his companions stood with him, and in this reading [Adoni] is non-sacred. Another interpretation: [A-donai] is sacred, and he says to the Holy One, blessed be He, to wait for him until he runs and brings in the guests.

Rabbi Eleazar in the Gemara Shabbat, is the authority for this latter reading:

Avraham asks God to wait while he extends hospitality to the strangers coming in from a hot day, and God waits, and resumes the prophetic visit as the angels leave to continue their missions.

There are a number of other instances of waiting in the parashah. The angels wait in Avraham and Sarah’s tent. The angels give Avraham and Sarah the news that in a year’s time they will have a son. God waits to punish the inhabitants of Sedom and Amora until He “descends” to determine up close whether they are as wicked as they are reported to be, and waits even longer by consulting with Avraham before acting. [Avraham advocates that God should be concerned about what today is called euphemistically “collateral damage”:  not harming innocents when punishing the wicked. God agrees.] The angels wait overnight in Sedom in the house of Lot, and wait until Lot can try to gather his family before destroying Sedom. Lot hesitates, wishy-washy waiting, before fleeing Sedom. Hagar, wandering in the wilderness and nearly giving up, sits down and waits to see what will happen to her son Yishmael, and receives angelic assistance. Avraham waits for an advantageous moment to tell Avimelekh, king of Gerar, about a theft committed by his subjects. The journey to Mount Moriah for the Akedah takes three days, giving Avraham and Yitzhak time to think. And according to the Mishnah Avot (5:6) the ram that Avraham finds to sacrifice instead of Yitzhak had been waiting there since twilight at the end of the sixth day of Creation.

While it is definitely important, practically and spiritually, to know when to act and to act decisively at the right time, the art of waiting is also a vital spiritual skill (see Rabbi Natan, scribe of Rabbi Nachman of Breslov, in Likkutei Halakhot, Birkhot haShachar, 5:30). In attentive waiting the vagaries and complexities of a situation get clarified, hidden factors are given time to come into view, and we can work at resolving problems effectively. In attentive waiting we avoid mistakes of haste and knee-jerk reactions that entangle us in sticky situations.

The Sefat Emet on this week’s parashah (5632) notes that the window of human consciousness is “like the point of a needle.” Despite being integrally connected to vast physical and heavenly worlds, all we perceive and experience is limited to showing itself in the here-and-now of our attention, held in our localized, embodied existence “in the opening of the tent.” Waiting through time is our way of getting a more expansive view of reality.

According to Rabbi Nachman of Breslov in Likkutei Mohara”n (1:24: 7,8), the very highest level of our minds, pure consciousness, corresponding to the Sefirah Keter on the level of divine revelation, has the function of organizing and stabilizing our mental processes. He notes, citing Job 36:2, that the noun “Keter,” which means “Crown,” is based on the verb root k-t-r which means “to wait.” The highest level of consciousness is a waiting, a stretching of time to help us organize and stabilize experience.

It’s appropriate, then, that the term used in the Mishnah for meditation before prayer is also “waiting”:

One does not stand to pray except in a state of solemnity. The early righteous ones would wait for one hour and then pray, in order to direct their hearts to God.

The meaning of שוהים is waiting, that is to say, they would wait before prayer for an hour, during which they would cease conversation and thinking and then begin to pray.

Maimonides is describing the most basic meditation technique: quieting the mind. While the Mishnah recommends this meditative, attentive “waiting” as a practice of pious people, valuable but not obligatory, the Gemara Berakhot (32b) and the codes (Tur O.H. 98, and Shulchan Arukh, O.H. 98:1) state that it is a necessary preparation for prayer. It’s interesting that, with all the ritual fine-points that are taken seriously among those who observe halakhah today, this valuable and obligatory preparation for prayer is widely ignored. It’s time to bring it back.

We truly and deeply commiserate with the many Israelis who are within range of the rockets and other violence of the terrorists of Gaza – they have been under attack for years, and it has been getting worse and worse. May HaShem protect them, and all of us, and help us wait, with patience and vigilance, for the right, blessed moment to act with resolve and success to subdue the perpetrators of violence and bring real peace to this suffering region. 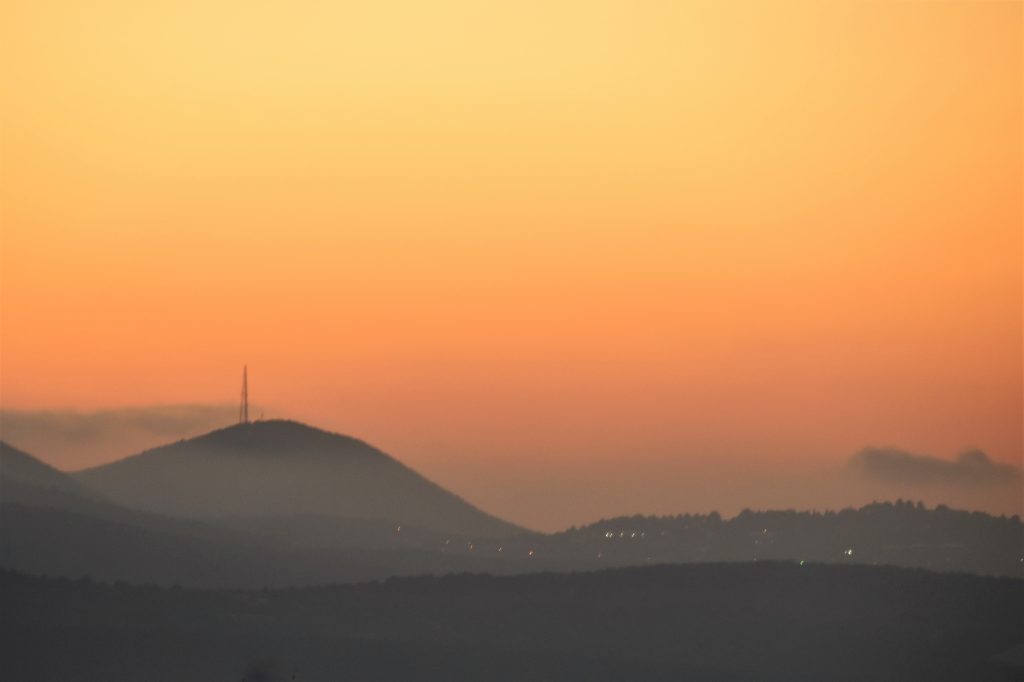 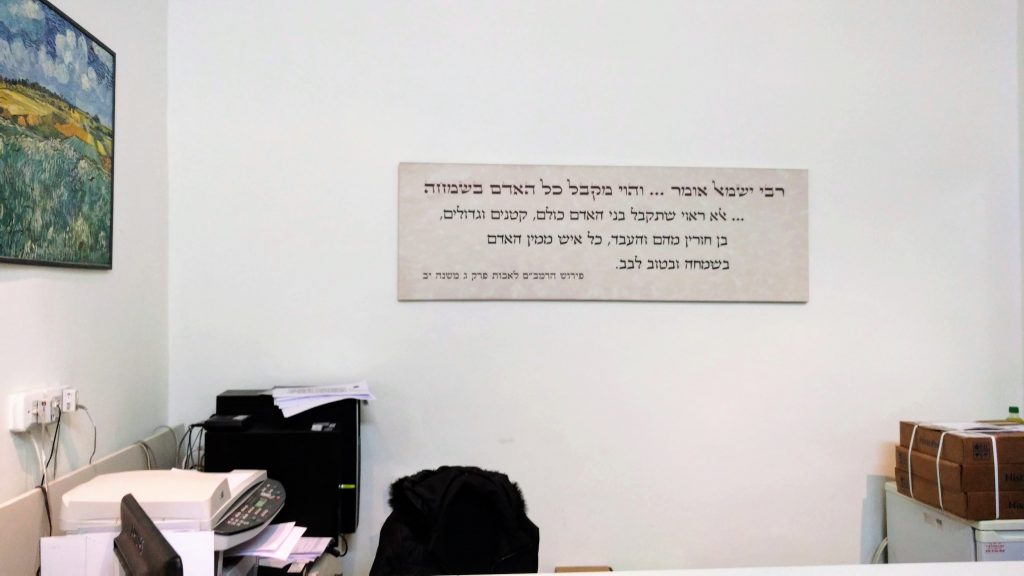 Rabbi Ishmael says: Receive everyone with joy. In a doctor’s waiting room in Jerusalem

One thought on “Waiting Room”