The tension in the Middle East keeps ratcheting up, and the multiple threats against Israel are compounded by our chaotic political situation – the unresolved election that has left our government in limbo for months, with no clear outcome in sight. So what else is new? This region has been a dangerous neighborhood since the time HaShem said to Avraham and Sarah

Avraham and Sarah were not being sent by God to a place of ease and comfort to live carefree spiritual lives. They were being sent into a place of constant warfare among the Canaanite tribes that preyed upon caravans and each other along the contentious main trade route of the ancient world, between Egypt and Mesopotamia. But God didn’t send them empty-handed. Recognizing Avraham and Sarah’s awakened conscience, He guided them to the essential unitive principles of Torah, ethical and theological – to love your neighbor as yourself, to care for your neighbor, recognizing the unity of humanity, and of the world, embraced in the oneness of God. Specifically because the Middle East was a place of conflict, it was chosen as the context for sharpening and strengthening our sense of responsibility and support for each other, to be a blessing for others, to elevate all of humanity.

Being as this is the Torah, however, which is true life, things don’t go as expected. Soon after Avraham and Sarah arrive in the Land, they are confronted with a famine. The Land of Israel is a delicate, arid, chaparral climate, where rainfall is never guaranteed, and human moral behavior is part of the ecosystem.

Deciding to leave the Land and wait out the famine in Egypt, Avraham is worried about the immorality they will face there. Sarah’s beauty is bound to attract attention and put her husband’s life in danger. To avoid confrontation with violent rivals, he suggests to Sarah that they tell people they are brother and sister, which is true, just not the whole truth (see Gen. 20:12). But this strategy has unforeseen consequences: Sarah is taken to the royal court to become a wife of Paro, until God intervenes with plagues against Paro and his household and the truth comes out. Recognizing that Avraham and Sarah have special divine protection, Paro releases them and rewards them with something like hush money and they return to the Land. It was a risky gambit, but they survive and even thrive.

The Ramban, however, in a controversial commentary, is sharply critical of Avraham Avinu:

Know that Avraham our father sinned a great sin, unintentionally, in bringing his righteous wife into sinful stumbling on account of his fear that they might kill him. He should have trusted in God that He would save him and his wife and all that is his. For God has power to help and save. Even his leaving the Land, which he had been commanded about at the start, because of the famine, was a sin he committed, for God, during a famine, will redeem from death (see Job 5:20). Because of this deed, exile in the land of Egypt, under the hand of Paro, was decreed upon his offspring, for where there is judgment, there is evil and sin (see Eccles. 3:16).

Ramban questions Avraham’s judgment. In context, Avraham had been commanded by God to go to the Land of Israel and promised divine blessing and protection:

Given this divine support, Ramban suggests that Avraham should have trusted God, stayed in the Land and toughed out the famine, rather than engage in a white lie, endanger his wife and let her be taken to the royal court, from which they escape only because of divine intervention. But God did protect them after all – so what’s the problem? Ramban goes further. Based on a principle that he articulates later in his commentary, that “the deeds of the fathers are a sign for the children,” that is, that the actions of the patriarchs and matriarchs pioneer archetypal patterns for the destiny of their descendants, Avraham’s mistake doomed his children to repeat the pattern, to be enslaved in Egypt under the control of Paro. Even if this was part of the destiny of Israel, the fact that the enslavement was harsh and lethal shows that it had a punitive dimension, indicating it was a consequence of sin, Avraham’s sin.

With all due respect to the Ramban, several other commentators rise to the defense of Avraham. For instance, Rabbi David Kimchi suggests that, humble and self-aware, Avraham realizes that though God’s promise is reliable in itself, he himself may not always be worthy of it. So he maneuvers according to the best wisdom he can muster to come up with a reasonable strategy to deal with the crisis. Avraham does not indulge in magical thinking, assuming that he is worthy of a miracle to save him. This is the real meaning of Emunah. It’s not belief, which is just pretending to know something when you don’t really know it. Emunah is realistic steadiness in the face of uncertainty and danger. And though Ramban accuses Avraham of lack of trust, in truth he does put his trust in God, just in a different way. Avraham trusts that God really is with him and with Sarah, wherever they are – this is also the steadiness of Emunah. Yes, it’s an uncanny pattern that just as Avraham and Sarah get caught in Egypt but escape with great wealth, so, too, the Jewish people get caught in Egypt and escape with great wealth — literally, and with the Torah they receive. But it may not be that Avraham’s decision caused this pattern for his descendants, but rather that we are all drawn into these mysterious archetypal, divinely-guided paths. The deeds of the fathers are not a cause, but a sign for their children, a sign revealing the deeper designs that move our lives.

This week Israel celebrated Aliyah Day, timed to come out during the week we read of the first courageous Olim, Avraham Avinu and Sarah Imeinu. The Middle East is still a dangerous place, but the deeds of our patriarchs and matriarchs are still a sign and source of inspiration for us all, to remain steady in the face of uncertainty and danger, and work together to improve Torah society in this precious, sensitive Land, to continue to advance human ethical culture and spiritual awareness, to be a blessing for humanity. 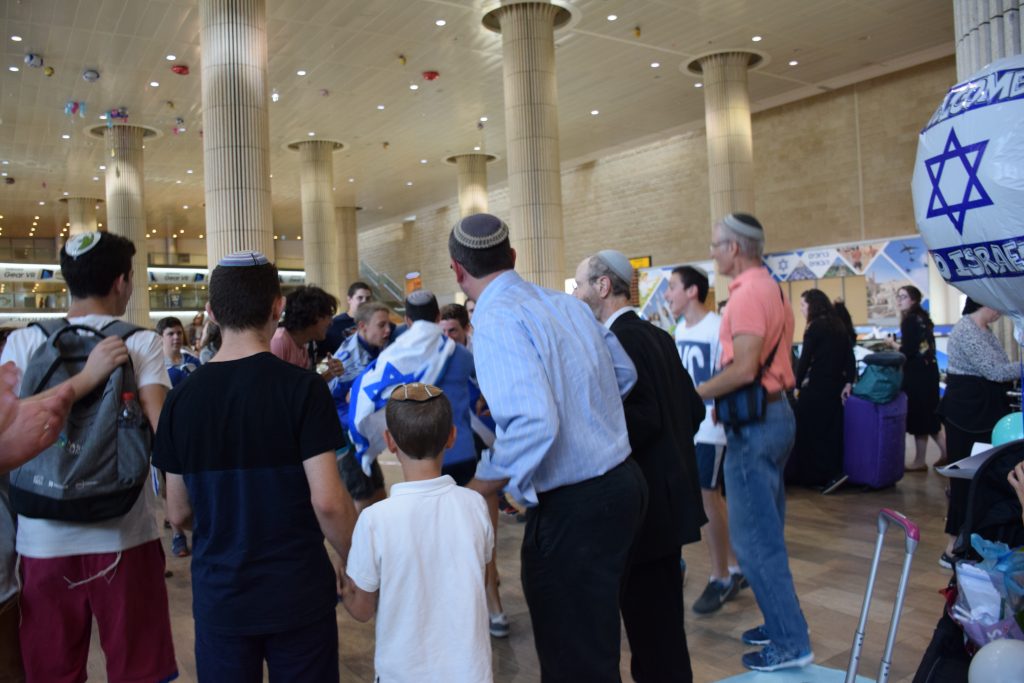