In the Mishnah Avot, Rabban Yochanan ben Zakai asks his top students their opinion on the most direct path to a virtuous life:

He said to them ‘go out and see what the straightest path to which a person should adhere?’ Rabbi Shimon says ‘seeing the consequences that arise.’

The commentators explain that by understanding the consequences of our actions we can adjust ourselves to avoid harmful results and facilitate beneficial results. It’s good advice for political action as well. Revolutionary Iran has been ratcheting up violence and threats of greater violence throughout the Middle East for years. Most nations of the region and of Europe have reacted like frightened children to a schoolyard bully: with appeasement. But the pace of violence has only accelerated. President Trump’s bold move to order the assassination of the Iranian general who commanded the imperialist program of violent domination, who was responsible for the deaths of hundreds of thousands and the displacement of millions, and who was planning even greater destruction, may have been intended to set back the program and shock Iran’s leadership into submission. But its predictable short-term result was to trigger the typical, immoral and immature drive for collective tribal revenge imbedded in Middle Eastern culture. If escalation continues, and it usually does, it’s not hard to see where this is headed, God help us all.

This week’s haftarah and Torah portion offer some wisdom on dealing with the dangers we face in the world today. The haftarah is a selection from 1 Kings chapter two, the death-bed testament of King David. With hard-won wisdom from a lifetime of battles and intrigues, King David is addressing his son Shlomo, who has just survived an attempted violent usurpation by his brother and is about to succeed his father as king. He tells his son “be strong, be a man,” and gives him an ethical and spiritual directive:

“keep the observance of HaShem your God, to walk in His ways, to keep His statutes and mitzvot  and laws and testimonies as written in the Torah of Moshe, so that you act intelligently in everything you do and everything to which you turn.

But after this moral and spiritual advice King David turns suddenly to realpolitik. He advises Shlomo to have two dangerous political opponents killed:  the hot-headed and murderous general Yoav, who had been a loose cannon in David’s army and recently opposed Shlomo in the attempted usurpation; and an implacable, treasonous enemy from the house of King Saul. It sounds ruthless, but King David could see where they were headed and advises Shlomo to act resolutely to head off even greater bloodshed. The misunderstood Just War theory of proportionate response is not about limiting defense to a quid pro quo of trading equal punches, or an endless cycle of revenge and killing. It’s intended to limit civilian casualties when responding effectively to an attack. When dealing with a relentless aggressor who will continue to cause greater harm when resisted proportionately, the best moral approach may be to put an end to the cycle with focused and resolute force.

Even so, violence, even justified and necessary violence in self-defense, is only an interim solution, and usually continues to beget violence. Ultimately, the fate of humanity depends on learning to transcend violence and revenge. This is the message at the heart of this week’s parashah. When Yaakov blesses Yosef’s sons Efraim and Menasheh, he seems to favor Efraim by intentionally crossing his hands to place his right on Efraim’s head, even though Efraim was the younger brother. The family had already suffered great trauma when Yosef had been favored by his father, so Yosef objects to the apparent favoritism. But Yaakov reassures him, giving the two brothers a further blessing:

And he blessed them saying “by you shall Israel bless, saying ‘may God make you like Efraim and Menasheh,’” and he placed Efraim before Menasheh.

It seems like Yaakov has just made things worse. In the first blessing he only placed his hand on Efraim, a quiet sign. Now he vocally and publicly places Efraim before the elder Menasheh. But Rebbe Tzvi Elimelekh Shapira of Dinov explains that Yaakov did not resolve the issue of favoritism by falling back on traditional primogeniture or by making his grandsons equal. He was not the one who resolved it. It was Efraim and Menasheh, Menasheh and Efraim who resolved it themselves, and Yaakov realized and affirmed this. When Yaakov seemed to favor Efraim by placing his right hand upon his head, and saw that Menasheh did not react with envy or jealousy, and Efraim did not react with arrogance or competitiveness, but rather both brothers rejoiced for each other, Yaakov knew that his family had learned their lesson and gained moral maturity (Agra deKola). And this is the real blessing Yaakov bestowed, and the blessing we use to this day. The antagonism that comes of envy and jealousy and destructive competition, that drives humanity to hatred and violence, is ultimately resolved not through rearranging externals, but by a transformation of attitude, an expansion of the self to embrace others – to love our neighbor as we love our selves (Lev 19:18). Can we learn to feel such brotherhood and sisterhood that we rejoice for each other’s success and empathize with each other’s struggles?

This is the vision that Yaakov Avinu leaves for his children at the end of his life. As he senses his end is near he says to his family:

“Gather together and I will tell you what will happen to you in the end of days.

The Torah doesn’t tell us what he prophesied. But the Midrash Rabbah brings the interpretation of Rabbi Simon:

Rabbi Simon notes that the same phrase, “in the end of days,” is used by Ezekiel in his prophesy of the last war at the end of history: the defeat of a nation called Gog that tries to destroy Israel. Rabbi Yechezkel Landau points to Yaakov calling his children to “gather together,” and says that this is the power that will enable Israel to defeat the final enemy and put an end to war: the power of unity. And this solidarity doesn’t end with Israel. The peace of the end of days, the ultimate peace, will arrive only when we recognize the unity, brotherhood and sisterhood of all human beings.

As we were driving today in the midst of a rain storm, in the Land of Israel in the midst of the stormy Middle East, there was a sudden break in the clouds, the sun shone brightly and a rainbow appeared. When enemies make peace, says the Ramban, they reverse their bows and approach each other, showing they mean no harm, and this is the symbolic meaning of the rainbow, the reversed bow offered in peace from Heaven (Gen. 9:8). May humanity find its way to transcend violence, rejoice in our shared humanity and bring heavenly peace to this suffering world. 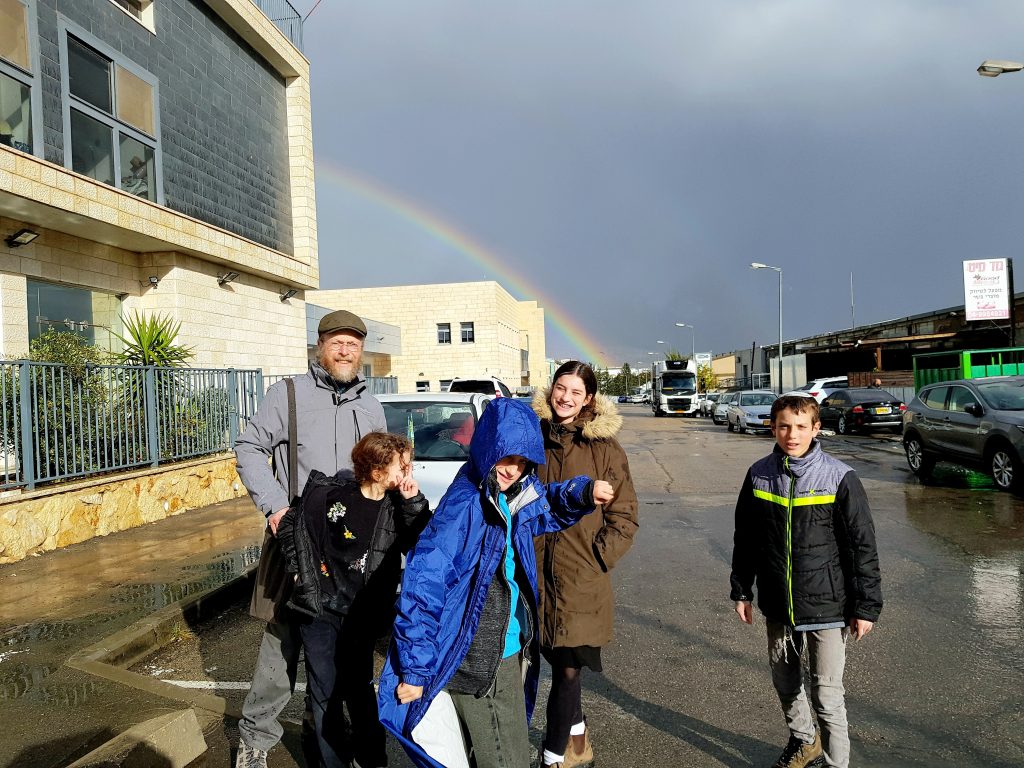 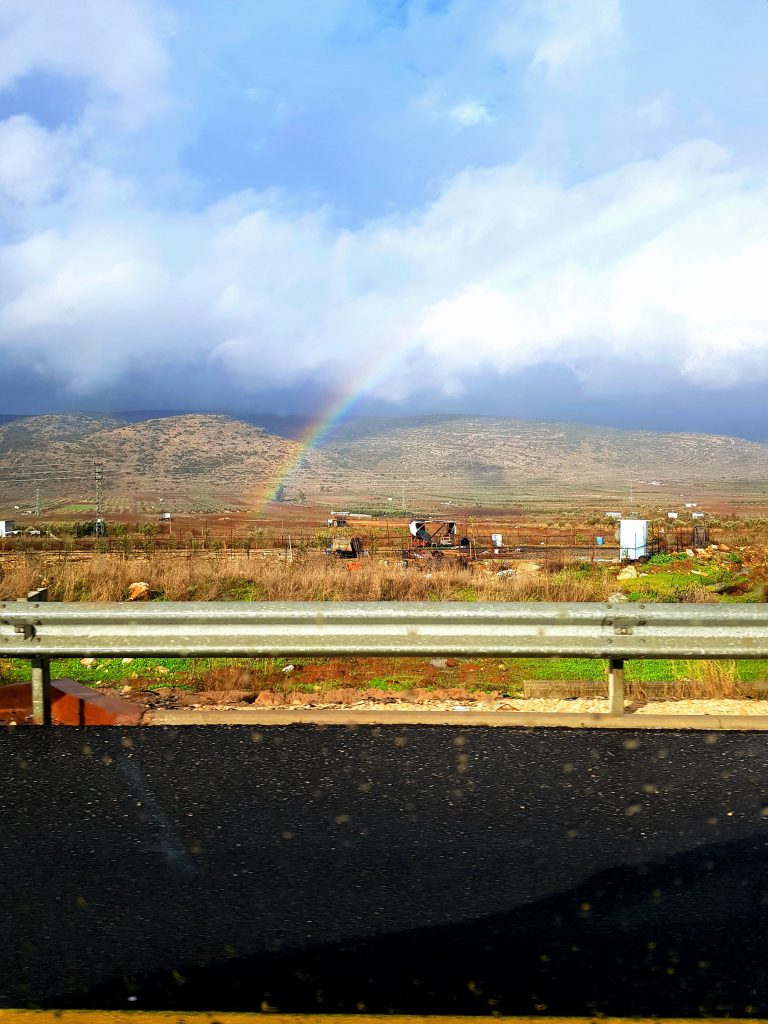