During Hol haMoed we took a day trip with some of our children and grandchildren to Kibbutz Nahsholim on the Mediterranean coast just south of Haifa, to attend the Marine Tour sponsored by Ptil Tekhelet. This is an organization dedicated to promoting the use of tekhelet, the beautiful blue dye that is part of the complete Torah mitzvah of tzitzit:

Speak to the Children of Israel and say to them: they shall make for themselves fringes on the corners of their garments for all their generations and place on the fringe of the corner a strand of tekhelet. And it shall be for them for fringes and they shall see them and remember all the mitzvot of HaShem and do them… I am HaShem your God Who took you out of Egypt to be your God, I am HaShem your God.

How is it that the mitzvah of tzitzit is to remind us of all the rest of the mitzvot of the Torah by looking at them? What is the role of the blue strand of tekhelet tied together with the other white strands? And what does this all have to do with the Exodus from Egypt?

The color tekhelet is a medium indigo blue. In the Gemara Sotah, Rabbi Meir explains why this color is chosen:

It is taught: Rabbi Meir says, “what is different about tekhelet from all other dyes? Because tekhelet resembles the sea, and the sea resembles the sky, and the sky resembles the Throne of Glory, as it says ‘And they saw the God of Israel and beneath His feet was like a brickwork of sapphire and like the essence of heaven for purity,’ and it is written ‘like the appearance of sapphire stone is the likeness of the Throne.’

Rabbi Meir Simha HaKohen of Dvinsk in his commentary Meshekh Hokhmah explains that the tzitzit, the fringes commanded to be on the corners of men’s four-cornered garments, are like the unfinished threads of a new suit. It’s a tailor’s custom to leave some threads on a new suit for the customer to cut – these days sometimes pockets are sewn shut or the back vent of a jacket is basted together and the customer is expected to open them himself. The custom is intended to prove the garment is new, and invite the customer to participate in finishing his suit. So, too, the tzitzit on the corner of our garments remind us that the world is unfinished and we have work to do, and the tekhelet-blue strands point us to the quality of that work – the heavenly work of mitzvot, enacting HaShem’s Will more clearly in this world.

The problem is that the source and the procedure for making the precise tekhelet dye was lost for centuries. Our knowledgeable and engaging guide for the Ptil Tekhelet Marine Tour, Rabbi Mois Navon, explained that tekhelet was one of the most precious dyes of the ancient world, one of the colors of royalty, difficult to produce and very expensive. The families who knew how to make it kept the process a closely guarded secret, so no precise written records survive, except for a few hints in the Gemara. So for centuries Jews have used only white tzitzit without the blue, since to place the wrong blue-dyed strand would disqualify the fringes for the mitzvah.

But through a combination of sensitive, historically-attuned scholarly interpretation of the hints found in the Gemara and other parallel sources, archeological discovery and analysis, and careful chemical analysis and experimentation, the source of the dye has been identified pretty conclusively as the murex trunculus. It’s a snail found along the Mediterranean coast around Haifa and slightly north, still in the precise region specified by rabbinic tradition, and it has a gland containing the fluids that can be extracted and directly processed to produce tekhelet. The procedure for extracting and processing the dye has also been reconstructed. The result is a beautiful medium blue that does resemble sea and sky and sapphire.

Rabbi Navon brought numerous proofs that they have the correct source for the dye, the correct method to process it, and the correct color as commanded in the Torah. Among the most convincing is based on a passage in the Gemara Baba Mezia:

Rava said: why does the Torah write of the Exodus from Egypt in context of Tzitzit? The Holy One, blessed be He, says “I am the One Who distinguished in Egypt between the seed of a first-born and the seed of one who is not first-born, and I am the One Who will in the future exact penalty from anyone who hangs kala ilan on his garment and says it is tekhelet.

Kala ilan is a dye extracted from the indigo plant. According to Rava, its color is so nearly identical to that of true tekhelet that only God can tell the difference, at a microscopic level. Vegetable indigo is readily available, so spectrographic analyses and comparison of the essential compound of indigo and of the dye from the marine species murex trunculus was done. The results showed that, according to our state-of-the-art method of chemical analysis, the essential compound is identical and specific to just these two dye sources, proving that the color is correct and the source is correct. Only God can tell them apart. You can see the full account of the fascinating talmudic, historical and scientific detective story on the website of Ptil Tekhelet.

The Marine Tour was not all talk. It also included snorkeling off the coast in search of the actual murex trunculus, which is camouflaged and very difficult to find. As it happened, one of our grandchildren actually found one and was he thrilled!  Mercifully, the poor snail was safely returned to the sea as Israeli law requires for snails not officially harvested for tekhelet. Then the group gathered to actually produce the dye and use it to dye wool for strands of tekhelet for the actual mitzvah of tzitzit. This included some organic chemistry, ancient and modern, that transformed the clear liquids from the gland of the snail into the beautiful tekhelet-blue. The kids were amazed and delighted!

For the adults, this was a thoughtful and inspiring presentation that wove together Torah with history, archeology and science. It proved that we have rediscovered the true tekhelet of the biblical mitzvah. And it proves that the wisdoms of history, archeology and science, and all true wisdoms pursued with sacred intent, are all part of Torah wisdom itself. It’s a vast, expansive view of the eternal Torah, freed from narrow Egypts of the mind. And it’s in the spirit of the mitzvah of tzitzit – that our mission as Jews is to contribute our part to the continual improvement and advancement of the unfinished garment of the world through mitzvot that raise our gaze heavenward and help enact HaShem’s Will and reveal His infinite wisdom everywhere. 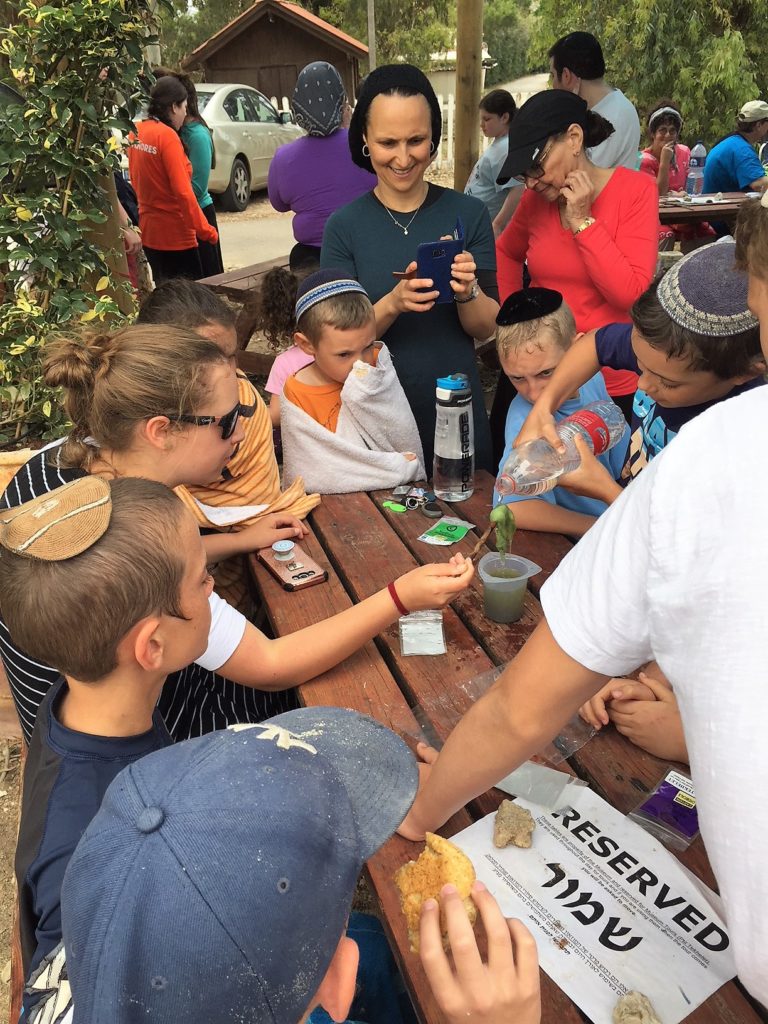 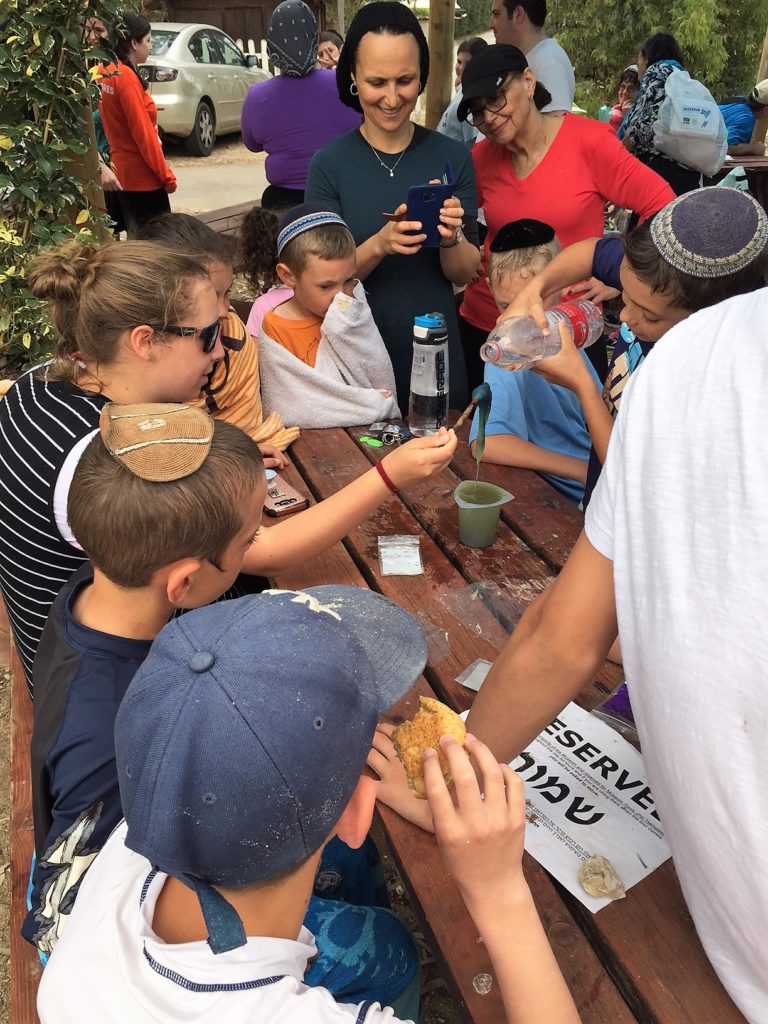