It’s a rabbinic artform to connect the weekly parashah to the issues of the day, and sometimes you have to stretch. Not this week. Global catastrophes, defiantly misbehaving societies, salvation through isolation and individuation – this week’s parashah is ripped from the headlines. But the eternal Torah doesn’t just reflect current reality, it gives us insight into what lies behind it and how to navigate the challenges.

The covid-19 global pandemic is more subtle than a flood, but it’s still destructive of life and long-term health, and the recommended strategy for avoiding it is ark-like – to take shelter and distance from sources of infection as much as possible, as it says in the Gemara Baba Kama (60b):

The Rabbis teach: if an epidemic comes to the city, gather in your legs, as it says “and you, let no person go out from the door of his home until morning (Ex. 12),” and it says “go, My people, and come into your room and close your doors for your sake (Is. 36).”

And the whole earth was one language and unified words… And they said “come let us build for ourselves a city and a tower whose top will reach to heaven, and let us make a name for ourselves, lest we be scattered across the face of the whole earth.”

What could be wrong with unity and solidarity?

The Gemara Baba Mezia, perek Ha-Zahav, analyzes the laws of commerce and business deals, which depend upon people acting with integrity. If a deal is made and all understandings discussed and agreed upon verbally and the buyer pays the money but the object of sale has not yet changed hands, which formally seals the deal, it is still technically permissible to back out, but the rabbis discourage such vacillation at this point with a curse:

Back in 1977, in the week of parashat Noach, Rav Soloveitchik, z”l, was finishing his rigorous three hour shiur on the Gemara Baba Mezia, perek Ha-Zahav, and took a few minutes to turn to the parashah, as he occasionally did on Thursday afternoons, in the last few minutes of the last shiur of the week. He cited for us the passage from the early midrash Pirkei deRabbi Eliezer on how the generation of the dispersion built their tower:

Rabbi Pinchas says they did not have stones with which to build the city and tower. What did they do? They would make bricks and fire them like a potter, until they built [the tower] seventy miles high. There were steps from the east and from the west. Those who carried up the bricks would go up from the east, and those who came down would come down from the west. If a person fell and died they paid no attention to him, but if one brick fell they would sit and cry and say “woe is us, when will another come up in its place.”

Rav Soloveitchik compared this callous attitude towards human life to the communist Chinese of that time, back in 1977. They were a disciplined society, very unified, everyone indoctrinated to think and act the same. Their supreme value was the perpetuation of the State through the grand project of material productivity. Individual human lives did not matter, only the collective project was important. During the cultural revolution, which lasted officially from 1966-76, there are estimates that up to 20 million people were killed and up to 100 million people persecuted and tortured and maimed for life because they did not toe the party line. It was an example of the totalitarian ideology of the generation of the dispersion, said the Rav, of an enforced unity and groupthink gone disastrously wrong:

And HaShem descended to see the city and the tower that the human beings built. And HaShem said “they are one people and one speech for all of them, and this is what they have begun to do. Now nothing will be restrained from them of whatever they concoct to do.”

The generation of the dispersion considered the previous generation — selfish, wanton, violent, chaotic, and ultimately destroyed by the flood. So they decided that the answer was to create a totally unified society, all speaking the same, thinking the same, living tightly together sealed off from the rest of the world, and all engaged in one project together – to ascend to heaven. The unity of the collective and the project to maintain that unity were all-important. It did not matter if they lost people along the way as long as the project continued. God sees that this path will lead to disaster and breaks up the dangerous group-think ingeniously by creating diversity of language.

When the rabbis in the Gemara analyze the generation of the dispersion and the generation of the flood and identify their common mistake as “not standing by one’s word,” it seems trivial compared to their more serious sins. But the rabbis are teaching us something deeper here, pointing to the core attitude that leads to their destructive behavior. A person who does not act on principle is driven by selfishness. A self-centered person sees words and agreements and other people as merely instrumental to getting what he wants, and so will not stand on principle, or stand by his word.

The selfishness of the generation of the flood is obvious – they used violence to take whatever and whoever they wanted for themselves. But the generation of the dispersion seemed to be disciplined and unified to support each other – but what kind of discipline and what kind of unity? A totalitarian unity achieved by indoctrination and group-think, “one language and unified words,” is a dangerous unity. It, too, is driven by self-regard, a selfishness spread to the collective, sealed off to protect itself and its goal of self-perpetuation at all costs, with individual lives as merely instrumental to that end. God saw the folly of that generation and dispersed it – a punishment that is really a healing – false unity dispersed for the sake of healthy diversity.

Here, too, our parashah reflects our current reality with devastating relevance. An exaggerated unity characterized by socially-enforced conformity in which members imagine they are engaged in a grand project ascending to heaven, for which human life and health are regarded as expendable, is a dangerous unity. A discipline of group-think, that inevitably loses touch with reality for lack of critical voices, is a dangerous discipline. And when this kind of unity and discipline is defended with riots and violence and deceitful behavior, with callous disregard for the lives and health of others outside and even inside the group, it’s clear that it has nothing to do with true Heaven. It’s a resurgence of the self-centered Tower of Babel ideology. Claiming to be in the name of Torah, it can lose sight of the most essential principle of true Torah: that it is תורת חיים ,  Torah of Life.

At the end of the parashah comes the couple who are the great hope for humanity: Avraham Avinu and Sarah Imeinu. They refuse to fall into lock-step with the surrounding idolatrous culture. They’re self-reliant, they think for themselves, they care about others, all others, from a position of robust independence. To Avraham and Sarah and their authentic children, HaShem says: 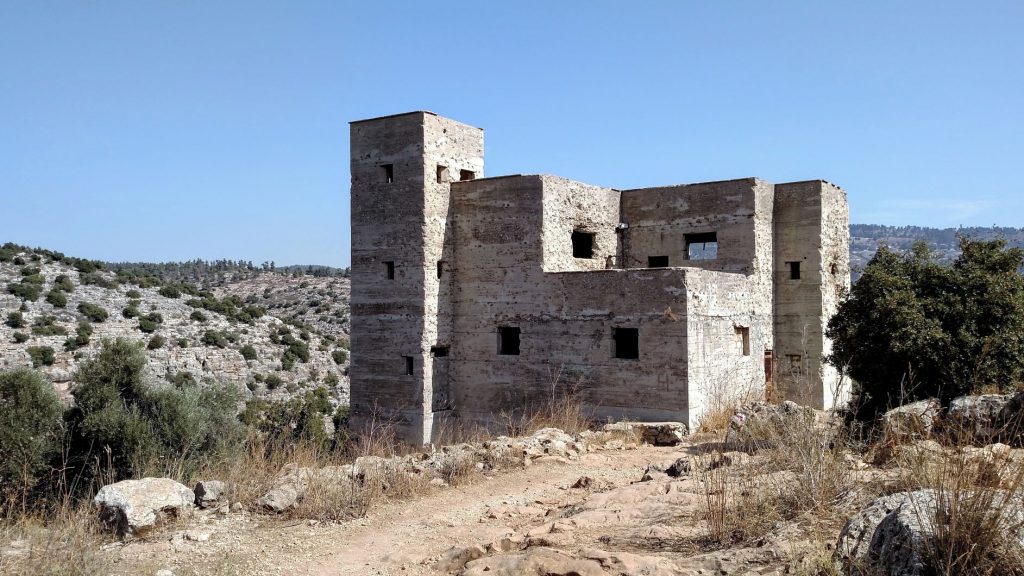 The old British Mandate police headquarters for the area of Nahal Amud back in the 1930s.