Nachmanides gives us a key to reading the Book of Bereshit:

The Book of Bereshit is the book of formation, with the creation of the world and formation of every creature, and the events of the forefathers which are like a formative process for their offspring, because all their events are form patterns to hint and inform as to all that will come to them in the future.

Nachmanides reads the book of Bereshit as revealing the archetypal patterns at the core of human history. The early generations of mankind are the seeds from whom we have sprouted, and contain within them all the potentialities of the later generations, for better and for worse. It’s not that we are doomed to just circle in their footsteps, but rather that they hold up to us a mirror in which to recognize the formative elements of our character and give us insight to make adjustments to grow towards our higher potential.

So, this week’s parashah contains many archetypal firsts for humanity, including the first act of religious piety and the first act of murder – both acts by the same person. Kayin is the first to dedicate an offering to God, followed by his brother Hevel. Kayin’s offering is not accepted by God, Hevel’s is. Then Kayin kills Hevel.

The commentators try to figure out, first, why Kayin’s offering was not accepted and Hevel’s was – the Torah does not make that clear. Rabbi Moshe Alsheikh of Tzfat picks up a hint from the language of the verses:

And it was at the end of days Kayin brought from the fruits of the ground an offering to HaShem. And Hevel brought also himself from the first born of his sheep and their fat. And HaShem gave attention to Hevel and to his offering. But to Kayin and his offering He did not give attention, and Kayin was very angry and his face fell.

Rabbi Alsheik notes that while Kayin brought an offering from the ground, it says that Hevel, reading hyper-literally, brought “also himself.” This is a true offering to God – not fruit salad or a barbecue, but oneself. The fruit or the animal can be symbolic, but the real point is giving of oneself, going beyond oneself. This self-transcendence was missing in Kayin’s offering.

Rabbi Shimon Raphael Hirsch develops this line of interpretation, that the piety of Kayin was not spiritually or ethically aware, it was merely self-centered, designed to acquire favor and protection for himself from God. He adds:

This is the kind of service of God whose source is fear.

The word for fear he uses here is not that used for true reverence for God, but crude fear – fear of other people, fear of the world, fear of life. According to Rabbi Hirsch, this self-protective self-centeredness is what leads to the murder. When God confronts Kayin after the terrible deed, He opens with a question and Kayin responds dismissively – making excuses and shirking responsibility for sin is already a pattern set by his parents. Everything about this interchange is telling:

And HaShem said to Kayin “where is your brother Hevel?” and he said “I don’t know. Am I my brother’s guardian?”

Many commentators observe that God’s question is intended to open the conversation – God knows full well what has happened, but He is giving Kayin a chance to own up and take responsibility for his terrible sin. The language of the question is noteworthy: the word “where” is not the usual Hebrew, איה  orאיפה   but what seems like an abbreviation or contraction , אי  . Rabbi Hirsch has an incisive and powerful read of this verse.

Where? “אי” . An “אי” –  an island, a separate place, limited to itself. From this “אי” the question is about the place of a human being who is not present – the question is in what separate place is your brother Hevel? And the answer that follows reveals the depth of the sinful descent. From here is a warning to those engaged in conflict: it is incumbent upon every person to know where his brother is. The question is absolutely justified, even if nothing has happened yet. And here is the answer: “and he said ‘I don’t know. Am I my brother’s guardian?’” Kayin saw this as an adequate excuse. It’s not his job to protect his brother, he has enough with his own business! The cold self-centeredness expressed in this answer serves us as a warning: a person who does not bear the yoke of responsibility with his friend, he is akin to a hater and destroyer. He can easily kill his neighbor if that person gets in his way.

Rabbi Hirsch is not just engaging in exegesis, but holding these verses up as a mirror to the crisis of his own time, the dangerous splintering of Jewish society whose consequences continue to reverberate. He also holds up a mirror to the directly related crisis gripping our world right now, not just the health crisis, but the moral crisis that is making it far worse, that is, far more lethal and debilitating and widespread, than it should be. As Rabbi Hirsch notes, God’s unusually-phrased question to Kayin already hints at the issue: where is your brother Hevel, in the sense: have you lost feeling for your brother, treating him as an island separate from you?

The pandemic is a complex medical challenge, but there are many bright and knowledgeable people around the world working on it and be-ezrat HaShem it can be solved. Since the virus is not only lethal and debilitating but highly and insidiously contagious, the job of the rest of us is to behave responsibly to guard each other’s health as well as our own through some simple precautions, masks, handwashing, distancing, until a vaccine can be found. In an ethical world, in a true Torah world, this would not be hard to do. But the spirit of Kayin still haunts us.

Wherever people care only about their own interests and disregard the welfare of others in disregarding simple, reasonable health guidelines, such as those who insist on their usual pleasures and routines or on their right to behave however they like, that’s the spirit Kayin. Wherever people ignore the consequences of their actions and their impact on others, such as political leaders who disregard the very health guidelines they put in place, that’s the spirit of Kayin. Wherever people pretend to piety, but their piety is merely self-serving, self-defensive, with no regard for the death and disease they are spreading to others, even rioting or behaving deceitfully to defend such piety, that’s the murderous spirit of Kayin. Murder begins when people set themselves off from each other as islands apart, as Rabbi Hirsch says: “a person who does not bear the yoke of responsibility with his friend, he is akin to a hater and destroyer.” These attitudes and behaviors long-preceded this crisis – the pandemic holds up a mirror to the dysfunctional sectors of our society and the reflection is not pretty. But it’s an alert to address these problems with serious and sustained attention.

The true spirit of Torah is expressed in the principle stated in the Gemara Shavuot 39a and other places:

All Israel are responsible one for another.

After the death of Hevel and the banishing of Kayin, Adam and Chavah conceive another child, whose birth is introduced with special emphasis:

This is the book of the generations of mankind in the day that God created mankind, in the likeness of God He created him. Male and female He created them, and He blessed them and called them humanity in the day He created them. And Adam lived one hundred and thirty more years and gave birth in his likeness and his image, and called his name Shet.

Shet, “foundation,” the ancestor of us all. The Torah essentially starts over here with the history of humanity, reminding us that Shet and all of us are created in the image and likeness of God. And we, too, have an opportunity, in this strange new year, to start again and get this right. Together. 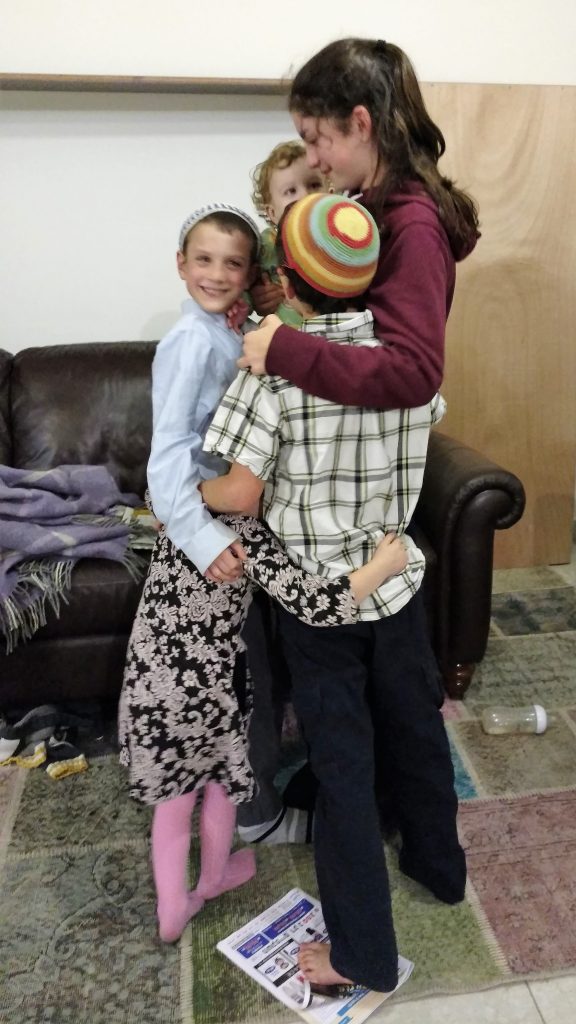