It’s Hol HaMoed Pesach and Israelis are on the move all over the country. Getting out to enjoy the natural beauty of the Land is a favorite activity, and together with the Israel branch of our family, we joined thousands of other families visiting the Hula Nature Reserve, a world-renowned birding site, and the Golan. The spring migration in Israel is pretty much over, and there were probably more people at the Hula than birds, but we did see some interesting species. The iridescent, startlingly colorful Bee-eaters, flying works of art, were nesting in large numbers. Ibises and spoonbills and stilts were wading. Marsh harriers were hunting. Buzzards and the last stork flocks of the season were circling overhead. Lapwings were everywhere. Even the people were fascinating – a wide variety of Jewish and Arab families enjoying the beautiful weather together, cycling around the nature reserve on all kinds of contraptions. Then we traveled to the high plateau of the Golan, which was a glorious green after an especially rainy winter, with snow-covered Mount Hermon towering in the background.

The great variety of animals and birds and people we encountered, each engaged in their own life drama at their own scale, the beauty everywhere we turned, put me in mind of what Maimonides says in his Guide of the Perplexed, that

It should not be believed that all the beings exist for the sake of the existence of man. On the contrary, all the other beings too have been intended for their own sakes and not for the sake of something else… The majority of the false imaginings that call forth perplexity in the quest for the purpose of the existence of the world as a whole or the end of every part of it have as their root an error of man about himself and his imagining that all that exists exists because of himself alone. (3:13, 26)

Maimonides is criticizing a shallow, narcissistic anthropocentrism that is still popular in some circles. He calls, instead, for recognition of the vast, detailed divine wisdom invested in every aspect of Creation, the preciousness of each creature on its own terms, and a mature and truthful human perspective that transcends self-centeredness and self-interest.

Such a perspective is also at the heart of the original vision of Hassidism. Rebbe Dov Baer of Mezritch, the student-colleague of Rebbe Yisrael Ba’al Shem Tov, has a thought-provoking interpretation of the pivotal moment just before the splitting of the sea, the event we commemorate on the Seventh Day of Pesach. As the Israelites stand at the edge of the sea with the Egyptian army bearing down on them, they cry out to HaShem. But HaShem responds:

HaShem said to Moshe ‘what are you crying out to Me for? Speak to the Children of Israel and get traveling.

The midrash Mekhilta, cited by Rashi, brings the opinion of Rabbi Eliezer, who understands this verse to imply that Moshe was also crying out to HaShem in prayer:

Rabbi Eliezer says: the Holy One, blessed be He, said to Moshe ‘My children are in the midst of trouble, the Sea is closing them in and the enemy is chasing and you are standing and praying at length before Me? What are you crying out to me for? Speak to the Children of Israel and get traveling.’ For He said ‘there is a time to make it short and a time to go on at length.’

Even though prayer, direct conversation with God, is one of the most important spiritual activities of Torah, there’s a time when even prayer needs to be curtailed – in an emergency, when it’s time to act.

But Rebbe Dov Baer of Mezritch, based on a creative reading of the Zohar, sees this moment as demonstrating a paradoxical but essential approach to prayer itself:

A person needs to consider themselves as nothing and forget themselves entirely and request everything, in all their prayers, on behalf of the divine Presence. Then one is able to go beyond time, that is, to the World of Thought, for there everything is equal: life and death, sea and dry land. This is what is said in the Zohar (2:48a) “and HaShem said to Moshe ‘what are you crying out to Me for?’ ‘To Me’ specifically – this depends on the Ancient-Transcendent One.” For they needed to abandon themselves and forget their trouble in order for them to get to the World of Thought, for there everything is equal. This is not the case when one adheres to the materiality of this world – adhering to the distinction between good and bad, that is, the seven days of the [lower] structure [of Sefirot]. How, then, can one get above time, where there is complete unity? So, too, when a person considers themselves to be something and requests their needs, then the Holy One, blessed be He, cannot clothe Himself in them, for He, blessed be He, is infinite and a vessel cannot bear Him, which is not the case when a person considers themselves as nothing.

Even though petitionary prayer for the needs of oneself or others is considered halakhically appropriate in the Talmud and codes, Rebbe Dov Baer calls us to a higher, selfless level of service, and not only because it is virtuous, but because it is more realistic and more effective. He cites the Zohar’s reading, that the salvation of Israel in that moment of extreme crisis engaged God at His very highest level of revelation – the Ancient, that is, Eternal-Transcendent One. For the Zohar this means that there was no need to pray at that moment, since, in that existential crisis, God’s eternal, infinite, unconditional compassion was assured.  But Rebbe Dov Baer reasons that if God in this situation will save Israel miraculously through His eternal, infinite  aspect, Israel needs to allow God to manifest as the Eternal Infinite, which means, they have to get themselves out of the way so that God can move them and the situation beyond space and time, at the highest level of revelation, called the World of Thought – of divine Consciousness, Wisdom and Understanding.  The Israelites themselves needed to adopt the eternal, infinite perspective of no-self.

It seems like a paradox: the Israelites, in order to save themselves, needed to forget themselves.  But the paradox is only from an external, categorical viewpoint. Experienced from the inside, when we get beyond a narrow, self-referential viewpoint, we begin to see our situation more comprehensively and accurately and can be more open to surprising opportunities that self-absorption tends to obscure. Thomas Csordas in The Sacred Self observes that the physical pain or anxiety of illness often prompts a person to become more focused on themselves. But this limits a person’s awareness and openness to taking advantage of opportunities for healing that might be available all around. He notes that many folk healing rituals are designed to help an ill person get beyond self-absorption, and project their concern to others, and to the ultimate Other, God. Rebbe Dov Baer takes this further, advising that in all prayer, anything we request should be “on behalf of the divine Presence,” for the complete benefit of all beings and repair of their relation to God. In this selfless viewpoint, new possibilities and opportunities appear.

So on Hol HaMoed Pesach, celebrating the miraculous redemption from Egypt and escape through the split Sea that opened the hearts and minds of the Children of Israel, we also try to open our hearts and minds to celebrate this amazing Land, its people, its precious creatures large and small, and the privilege of living in this holy place infused with God’s Presence.

Bee-eaters along the mud wall

Mt. Hermon in the distance 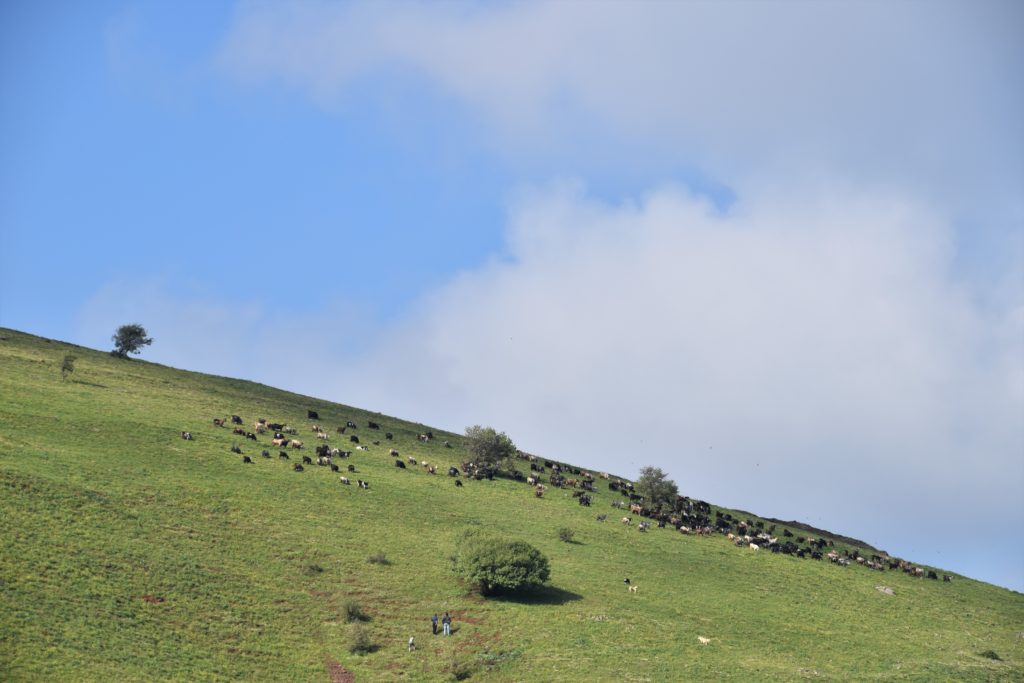 Har Odem in the Golan