The meditation videos are finally uploaded and viewable for those of you who are members of Tal Orot!

To become a member, please go to this link on our website.

The major strategy for dealing with spread of the coronavirus has been social distancing, including quarantine and lock-down. Hard as it is on people’s lives and on the economy, it has apparently been effective in societies with cultures of self-discipline and civic responsibility. But there have been numerous cases of non-compliance with this wise health mandate among some Jewish, Christian and Muslim religious communities around the world – each community claiming that large religious gatherings for study and prayer are pious and God will protect the pious, their pious, from harm.  The other major non-compliant demographic is libertine secular youth of wealthy Western countries who continue to party in large groups. These strange bedfellows are all united in one common mindset: magical thinking.

Many religions have a vested interest in promoting the power of mind or spirit over matter. When understood realistically, along with its limits, this idea can be valuable. But when overstated or exaggerated it can lead to unrealistic expectations.  In some Torah communities this idea takes the form of proclaiming the power of learning Torah to protect from all harm, including lethal viruses. This mindset can be traced to a misapplication of certain passages in the Gemara. For instance, there’s the often cited interpretation:

Sitting and reading the words of the Torah and the Talmud and discussing them and analyzing them carefully has great intellectual and spiritual value, certainly. But if I were to apply a Brisker analytic distinction here, for most people it’s not the ma’aseh, the act of Torah study that is protective or therapeutic, it’s the cheftzah, the substance of Torah study. It’s the deep wisdom and insight you learn that helps you navigate the challenges of life. Torah study in depth and truth helps us learn and implement the principles of wise, good, wholesome and responsible living – including how to protect your health and the health of others who you should care for responsibly through real medical knowledge and practice. But to pretend that the mere surface act of learning will protect you from all harm is turning the act of Torah learning into a magical charm, a superstitious ritualization of a precious cognitive spiritual process, and a desecration of Torah.

Much of what passes for mind over matter among those who assert the protective power of Torah learning is mere fantasy and wishful thinking divorced from reality. The tricky thing about fantasy and wishful thinking is that there’s a certain latitude and lag time in the worlds of thought and word that enable a person to hold on to false ideas or illusions for a while before reality catches up. In the case of serious illness, that can prove deadly. A simplistic and uncritical assertion about the protective power of sitting and learning Torah is misguided. Advising others to ignore emergency healthcare protocols because Torah will protect them is worse than irresponsible. And even if such misguided and misguiding leaders want to advise their presumptively invincible communities to ignore health mandates, they have a responsibility to care about those outside their communities who do not pretend to be so invincible. The fact is though, that evidence is mounting that these non-compliant religious communities, rather than being invincible, have become epicenters of viral contagion.

But there’s also the example of Rabbah bar Nachmani in the Gemara Baba Metzia, fleeing from Persian government agents and hiding alone in a swamp. The Gemara says that the Angel of Death could not approach him because he was learning Torah constantly. At one point he hears a sound he mistakes for soldiers chasing him, and chooses to stop learning and die rather than be captured (Baba Metzia 86a). But here, too, it’s not just the surface action of learning that staved off the destroying angel for a while. Rabbah was an extraordinary Torah scholar. Great Torah scholars can reach a level of devekut in their learning, of total commitment and constant mindful adherence to HaShem. This experience of complete immersion in Torah as immersion in the Mind of God, so to speak, is described in detail and in depth by Rabbi Hayyim of Volozhin in Nefesh HaHayyim (part 4). Rabbah, learning Torah constantly, was not just reciting lessons or even engaging in clever analysis. Especially in this case, running for his life from despotic authorities, we can assume he was in devekut, in deep connection with God.

In this week’s parashah, the topic of sacrifices is introduced with the verse:

Speak to the children of Israel say to them: a person who offers from yourself an offering to HaShem, from a domestic animal, from cattle or sheep you shall offer your offering.

Rabbi Yeshaya Horowitz focuses on the phrase “who offers from yourself an offering to HaShem…” He says that the seemingly superfluous “from yourself” teaches us that the ideal offering is not the sacrifice of an animal, but giving your whole self to God, complete holiness in serving God (Shnei Luchot haBrit). This is a level of Torah learning and mitzvah practice with your whole mind and body, “with all your heart, all your soul, all your might (Dt. 6:5),” that really is transformative.

Real mind over matter requires first reaching a level of mind over mind – deep mind over superficial mind, transformative mind that first overcomes all shallow thinking and bad habits of thought, and confers true discipline of mind and body, and then, maybe, through real inspiration, it can penetrate to somatic levels. This is possible. Nachmanides argues for inculcating this deep spiritual service as the ultimate aim of Torah, bestowing upon us a life so vital and enlightened that, among other gifts, it would make medical healing by natural means unnecessary. But he also admits that most people cannot reach this spiritual level, and if not, they need to resort to doctors and medical wisdom (Torah Commentary, Lev. 26:9; see Shulchan Arukh Y.D. 336:1, Turei Zahav).

To actually protect from an aggressive pathogen like the corona virus by purely spiritual means would require a level of conscious transformation that few, even spiritually advanced, people can attain. With the greatest kavod, honor, and no disrespect, may Rabbi Yitzhak Luria, z”l, revered by all of us here in Tzfat, please permit me to use his example as a reminder and wake-up call, for the sake of pikuach nefesh, for the sake of helping us save lives. Rabbi Yitzhak Luria, z”l, was one of the most spiritually advanced human beings of all time. What Rabbi or Rebbe today would dare compare himself and his merit, or the presumed merit of his students, to Rabbi Yitzhak Luria, z”l? He learned Torah non-stop, at a level few of us can imagine. Rabbi Yitzhak Luria died in an epidemic that decimated Tzfat in 1572. But that was in the sixteenth century — they just didn’t have the medical knowledge to protect themselves adequately. We have no excuse – we have seen this train-wreck coming from way down the track. And when it comes to protection by spiritual means, the whole point is that it’s not a power in our control — it’s in HaShem’s Hands.

It’s vital for the Torah community to apply truthful critical thinking to discern real causality, how mind actually impacts matter. Some approaches to Talmudic analysis over the last several centuries have become enmeshed in verbal casuistry, pilpul, and have lost the essential quality of applying Torah wisdom to reality. True devekut entails knowing our place in reality, learning some humility, getting rid of wishful magical thinking and misplaced self-confidence, and realizing that God is in control. Mind can impact matter, but not just by saying words or phrases in the mind or out loud, or even by analyzing the words in subtle arguments, but by a learning that helps us gain real wisdom on the practical and the spiritual level, applied to reality, and transforms us into insightful and responsible agents “to do love, justice and righteousness in the world (Jer. 9:23). “ In the Gemara Kiddushin 40b, in a famous debate over whether Torah study or action is greater, that is, which is the true aim of Torah life, the cleverly phrased unanimous verdict of the Rabbis is:

Ultimately, no one is asking these noncompliant Jewish communities to stop learning Torah – just to do it in small groups maintaining personal distance, or virtually by phone, abiding by healthcare directives. If their members are not able or not trusted to learn by themselves or in small groups, it’s a sign they’ve been infantilized and they’ve got other serious problems.

So here I am, committed to teaching Jewish meditation and recommending authentic Torah meditation as a valuable addition to Jewish spiritual life, yet appearing to argue against the power of mind over matter. So let me be clear. A simplistic, superficial, uncritical mind-over-matter mindset is magical, false and dangerous. The physical world, and our human physiology, has marvelous depth and complexity that should be appreciated. The interface between psychological process and physiological process is also marvelously complex. Extraordinary divine wisdom has gone into creating us and the vast world we find ourselves in, and the more we learn about it scientifically the more we honor our Creator (Maimonides, Yesodei HaTorah 2:1). It’s true that consciousness has resources we have barely begun to tap, as Torah Jews and as human beings, resources that the great men and women of our prophetic tradition, and some in our kabbalistic and hassidic traditions, have pioneered. But it takes great depth of understanding, mental flexibility, hard-won spiritual and moral discipline, great effort and profound devekut to access these resources. If you are blessed to touch on these resources in your life, the experience does transform your entire being, mind and matter together, and in the process may or may not cure what ails you.

But those who pretend that surface ritual actions or ritualized Torah learning by just sitting together in a yeshivah and talking Torah will reach such levels of devekut and protect adherents from illness or calamity are misleading themselves and others. In normal times such magical thinking might seem harmless — though false thinking is never really harmless. But in dangerous times such as these the results can be disastrous to everyone, to all of us.

Ultimately, the way of Torah is a way of wholeness, giving our whole self in holy service to God and each other. May we all learn Torah in truth, and may God’s wisdom guide, heal, and protect all humanity from the pandemic and inspire us to work together in love, brother-and-sisterhood, peace and friendship. 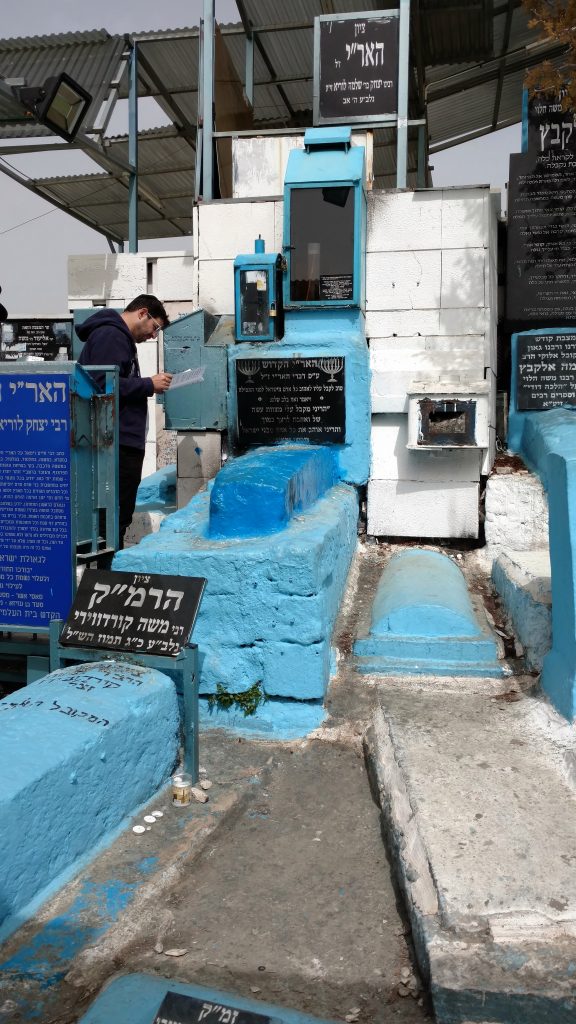 5 thoughts on “Mind over Matter”