His Majesty’s Government view with favour the establishment in Palestine of a national home for the Jewish people, and will use their best endeavors to facilitate the achievement of this object, it being clearly understood that nothing shall be done which may prejudice the civil and religious rights of existing non-Jewish communities in Palestine or the rights and political status enjoyed by Jews in any other country.

That’s the whole thing: one sentence of three clauses. It followed long and complex negotiations between leaders of the Zionist movement and British, French, Italian, Russian and American statesmen. The text itself was the product of several edits, paring down an initial draft suggested by Lord Rothschild and Chaim Weizmann and their Zionist negotiating committee, that the British regarded as too specific, to make it as brief and vague as possible to allow interpretive flexibility.

Yet it represents a pivot point in Jewish and world history. Its significance lay in its real-world context.  The Triple Entente fighting World War I, Great Britain, France and Russia, were maneuvering to carve up the Ottoman Empire allied with Germany. Britain wanted control of Palestine and figured a grateful Jewish populace would be reliably tractable subjects, and all three wanted to coax the United States to join their alliance and figured currying favor with American Jews might help. For Jews worldwide, millennia of persecution were highlighted by increasingly vicious pogroms in Russia and the Dreyfus case in France. In response, the nascent Zionist movement of the late nineteenth century and its First Aliyah were transforming the messianic hope of return to our homeland from a dream deferred into practical reality, bringing enough Jews to Israel to convince the alliance, and Jews ourselves, that a Jewish State was viable and valuable.

Without the dynamic tension of this context, those words on paper would have been ineffectual. But the alliance was ready and willing to commit, for a little while at least, to allow Jewish immigration to Israel to increase, and the Jewish people were ready to let this ambiguous declaration help galvanize their will and take advantage of the opportunity. That will was strong enough to withstand a series of subsequent British White Papers scaling back and effectively retracting the declaration, strong enough to withstand fierce Arab resistance, strong enough to move around 600,000 Jews over three decades to make Aliyah, strong enough to issue in the establishment of the State of Israel. The intent was expressed in one sentence – nothing much. The process that realized the intent was long, messy, sometimes brilliant, sometimes painful, and still a work in progress. But that one sentence unleashed a profound will.

And that’s how progress is made in this world. Rav Kook in his essay “The Soul of Nationhood and its Body” describes the process by which a high ideal gets realized. It’s a series of materializations and re-assessments, adjusting abstract goal to the limitations of action and imperfect action to the vision of the goal, back and forth, over and over again until a clarified reality results:

From the abstract goal is drawn channels and flows to conduct the dew of supernal life within the innerness of the boundaries, of the particular engraved patterns, and the dew is a dew of lights (Tal Orot) banishing darkness and illuminating life (Orot, 132).

Rav Kook is referencing the process of Birur, of progressive clarification of the will through its encounter with reality, a central principle in the Kabbalah of Rabbi Yitzhak Luria, z”l. Through this process, messy as it is, we learn about ourselves and our connections with others and with the world, and deepen our connection with HaShem.

The contract we signed to acquire our home in Tzfat is just an agreement of will between parties on a piece of paper. But it permitted us to move into our house and learn how to handle its features, among which is a beautiful olive tree that is producing abundant fruit. That’s exciting, except that we didn’t know the first thing about harvesting and processing olives. One of our Moroccan friends gave us some advice to harvest after the first rains, (which have just occurred), separate the ripening black olives from the green olives and follow a recipe from his mother to process them in brine. Another friend suggested packing the olives in layers of coarse salt in a jar. Some YouTube tutorials had other suggestions. Then when it came to actually harvesting, we found that the tree had been neglected and many of the olives had an Olive Fly infestation. We were still able to pick a fair amount of healthy olives and tried out those various methods of processing. The gardener gave us some hope: next year he would show us some natural strategies for minimizing the fly infestation. It has been a listening and learning process, adjusting goals to reality and reality to goals, and learning about what it means to strike roots into the Land of Israel. It’s a deep process of clarification.

This is how Rabbi Yaakov Leiner expounds the mysterious event of the Akedah, the binding of Yitzhak. The actual moment of the Akedah is a non-event. Nothing happens. Avraham Avinu does not sacrifice Yitzhak Avinu. But over the three days of walking to Mount Moriah, says Rabbi Leiner, Avraham went through a painful process wrestling with the apparent divine command to sacrifice his son:

It was exceedingly difficult in Avraham’s eyes to destroy in one instant all the recognition of the glory of Heaven that he had accomplished up to that point…and who knows, maybe he would transgress the command not to commit murder. He was greatly confused by this and was not at ease until the third day, when he strengthened himself and confirmed the holiness of HaShem…and said that it must be that when HaShem commanded me to do this, certainly there is in it the greatest good, and HaShem will clarify this for good. (Beit Yaakov, Vayera, sec. 54)

This is one of the most penetrating reads of the mystery of the Akedah I have found. It’s not that Avraham resolves the dilemma by invoking a teleological suspension of the ethical or any other paradox of definitive principles that commentators have suggested. The point is that Avraham does not resolve anything, he does not know how this will end, yet still trusts HaShem and follows His command into the unknown. Rashi notes that the language of the command itself, concluding with the phrase “on one of the mountains I will tell you,” harkens back to God’s original command to Avraham and Sarah “Get yourself going… to the Land that I will show you.” Rashi comments: “the Holy One, blessed be He, makes the righteous wonder and wait, and afterwards reveals to them. (Gen. 22:2).”

Avraham clarifies his will to follow HaShem’s Will wherever it leads – a willingness that becomes the very core of the Jewish people. This principle was profoundly expressed by sages such as Rabbi Nachum Ish Gamzu, whose holy burial site on a side street in Tzfat we visited this week. Whatever happened to him in his complicated life, even terrible suffering, he accepted as divinely intended, so, “Gam zu le-tovah — this, too, is for the good (Taanit 21a).The Akedah itself is a non-event, yet it is a climactic, pivotal moment in the development of the human spirit.

The Balfour Declaration commemorated this week was nothing much in itself. But it released powerful forces that were ready to roll, that have transformed Jewish history, transformed world history, and even brought us to our home here in Tzfat in this mysterious Land we love, the Land that is an essential aspect of the destiny of the Jewish people. 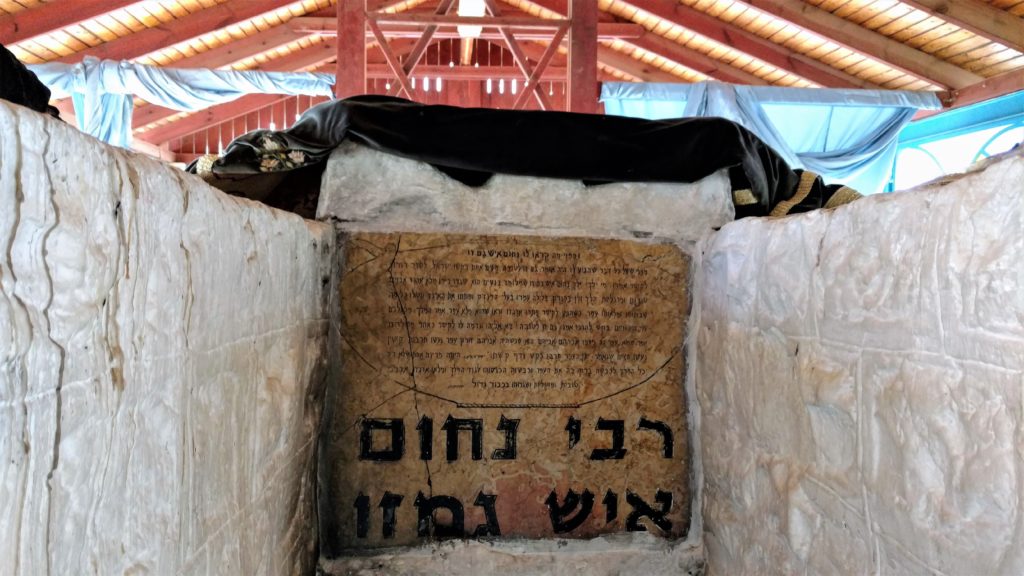 Here in Tzfat, Nachum Ish Gamzu is always prepared to help us redirect our sense of entitlement 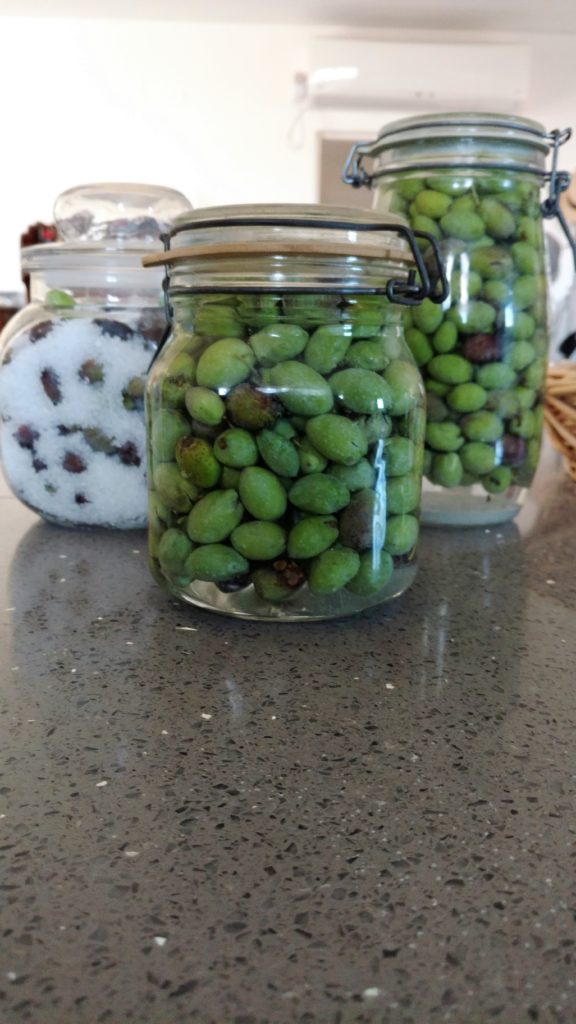 Gathering the lessons of the olives