This week a friend of ours completed a major step in an ambitious project he has envisioned. Three years ago, Yoel Tordjman, one of the great and accomplished artists of Tzfat, who is also a significant Torah scholar, received a bit of a revelation and realized that at that time he had painted 613 major paintings over the course of his current abstract expressionist period. This is also the number of mitzvot of the Torah. He received a further inspiration that he should gather all those paintings in one form or other and display them all on twelve of the most spectacular bridges in twelve different countries around the planet. He would start with the breathtaking mountain bridge over a deep valley at the southern entrance to Tzfat – the highest bridge in Israel. All 613 paintings, one for each mitzvah of the Torah, would be mounted on each bridge in turn, a massive art exhibit traveling from country to country. The events would be photographed by drones, and videos of all the exhibits would be made public internationally. The vision is that, just as bridges connect people from different places, and just as the mitzvot we do connect earth and Heaven, so art can connect the hearts and minds of all human beings of all cultures and religions and bring us together. This troubled world certainly needs more of such togetherness.

Yoel decided to do a preliminary exhibit this week with around two dozen of his paintings on the bridge of Tzfat. He got the official blessing of the police department and the spiritual blessings of a number of rabbis. Some original paintings were still locally accessible and duplicate full size canvas prints were made when necessary. So on a beautiful golden late afternoon this week, with a small group of family and friends, we loaded up the paintings in the back of a pickup truck and drove out to the bridge. The span is modern and graceful, with wide shoulders on both sides of the highway, guard rails and a long wire fence – and stunning views of the mountains and valleys of the Galil and of the whole Kinneret almost 3,000 feet below. The idea was for our little team to mount the paintings on the fence as quickly as possible, leave them up for about ten minutes with a professional art photographer filming the entire exhibit by drone, then pack up the paintings and leave safely without disturbing traffic too much. It all worked beautifully, and may have been the shortest art exhibit in history – kind of reminding me of one of those performance-art “happenings” that used to be popular in the sixties. The video will shortly be available to the public on Yoel’s website.

The progress of this project, from inspired idea, to extensive discussions and planning, to ultimate successful action, echoes the three essential themes of this week’s parashah: proper thought, word and deed.

The parashah opens with the laws of upholding vows and the nullification of vows. The core principle is:

If a person vows a vow to HaShem or takes an oath to prohibit something to himself, he should not profane his word – according to all that comes out of his mouth he should do.

The section goes on to lay out the procedure for rabbinic nullification of such vows in extenuating circumstances. The overall principle is that our words have sanctity, not just vows and oaths but all words. Though there is some flexibility, we should be careful and thoughtful in our speech, follow-through with what we say we are going to do, and stand by our word.

The next section of the parashah deals with the war against Midian, the tribe that intentionally tried to undermine the morality of Israel with rampant licentious behavior, an existential threat more dangerous than a physical attack, as described in the previous two Torah portions.  This war is commanded by God, and though Israel is victorious, Moshe is critical: the army’s action did not follow the divine command and is not complete and Moshe instructs them to finish it. I don’t want to get into a discussion here about the halakhic and ethical parameters of such wars of cherem in the ancient period. War in the name of religion, typically politicized and perverted, has been one of the curses of human history. When it comes to biblical enemies such as Midian or Amalek, think ISIS and compare to how resolutely we approach a war today against such entirely immoral enemies. For our present purposes, at-issue is the sanctity of action – how to act with effectiveness and completeness.

The third section of the parashah presents Moshe Rabbenu with a different challenge. The tribes of Reuven and Gad, predominantly cattle and sheep herders, want to settle in the Golan that had just been conquered from two kings in defensive wars, and not join the rest of the nation in the initially specified boundaries of the Land of Israel. For Moshe Rabbenu this recalled the trauma of the incident of the spies who brought back a negative report of the Land of Israel, discouraged the nation from entering the Land and doomed them to wandering the wilderness for thirty-eight more years. Moshe is concerned that these two tribes, by refusing to enter the Land, are putting the nation at risk once again. But the tribes of Reuven and Gad clarify that their intent is pure: they want to remain connected to the rest of the nation, and will only take their inheritance in the Golan after helping the rest of the nation settle in the Land of Israel. Their initiative will in fact enlarge the boundaries of Israel, and once their intention is made clear, Moshe approves it. This is the spiritual precedent for the inclusion of the Golan in the Land of Israel today.

From thought to word to deed – as the Israelites are about to enter the Land of Israel, this week’s parashah lays out the principles of this full range of human interface with reality. Rabbi Dov Baer of Mezritch advises:

One should consider that the World of Speech speaks through him, and without it, it would be impossible to speak, as it says “Lord, open my lips and my mouth will declare Your praise.” So, too, one’s thought is impossible to occur except through the World of Thought. It is like a shofar: what is blown into it is the sound that comes out, and if the shofar blower would separate from it then no sound would come out. So, too, were He, blessed be He, to be absent from a person, Heaven forbid, he would not be able to speak or think.

Rabbi Dov Baer calls our attention to the fact that, if we are really aware of what is happening, we don’t generate nor fully control nor fully own our thoughts and words. But we are responsible for them. The phrase “World of Speech” refers to the revelation of the divine realm of the Sefirot, and the phrase “World of Thought” to an even more recondite level of the Sefirot. His point is that we are already in the flow of thought and speech that we receive from the divine, and the implication is that we should appreciate their holiness and engage in thinking and speaking with a sense of sanctity. As the late Jewish philosopher Jacques Derrida says, “I have only one language, and it is not mine (The Monolingualism of the Other).” He explains that language comes from beyond us, we borrow it from the culture, and we receive the facility for it, we do not create that facility nor its content ourselves: it flows through us.

Though Rabbi Dov Baer does not address it directly, something similar can be said of the World of Action. We flow in it and we are pretty aware that it’s hard to control. Rabbi Yisrael Baal Shem Tov is quoted in sefer Be’er Moshe, Parashat Ki Tavo, as observing:

It is not possible that, when an action is completed, that action will be equal to the thought.

It’s common experience that in the process of expressing an idea into speech and actualizing the speech in action, the results usually don’t fully match the initial idea completely. This does not have to be discouraging – it just shows us that existence in this world is not in our control – it’s in God’s control. But we are part of the divine process, and ultimately thought, word and deed are most effective when we realize we are instruments for God’s Will. He is the Artist, we are the brush.

It was a privilege to play a bit part in the little art happening on the bridge of Tzfat. All things considered, the artist was quite happy with this test run of his vision. Mounting the entire exhibition on twelve bridges around the world is a far more ambitious goal. But even the attempt, however close it comes to the initial inspired idea, will help bring the people of this world a little closer, and help bring us all a little closer to Heaven. Be-ezrat HaShem. 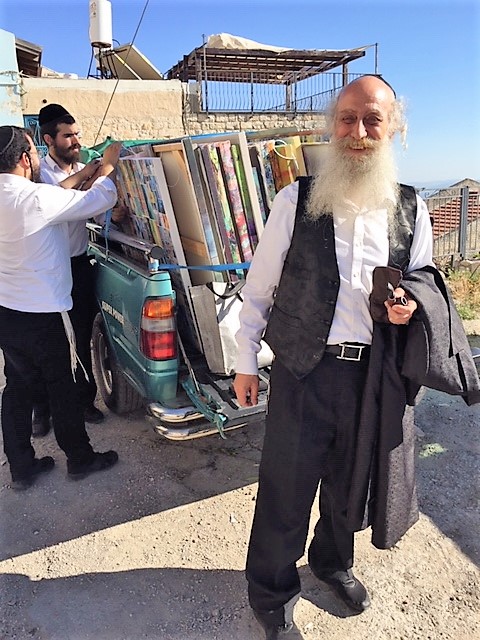 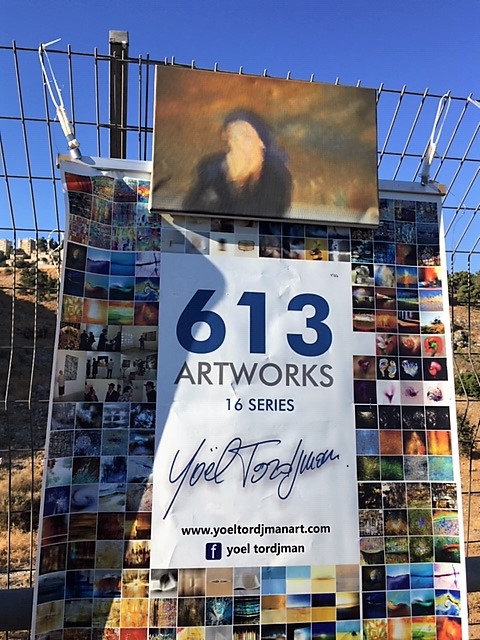 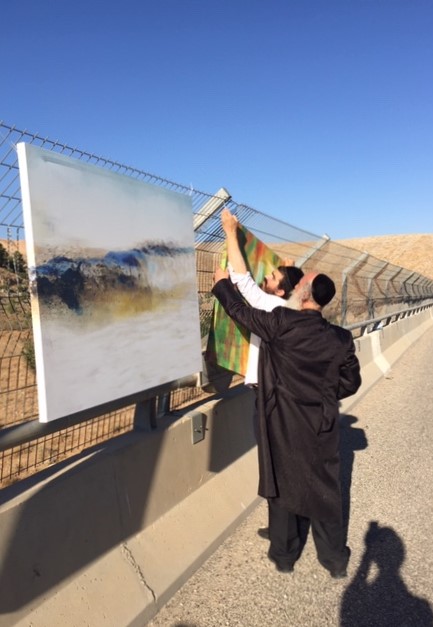 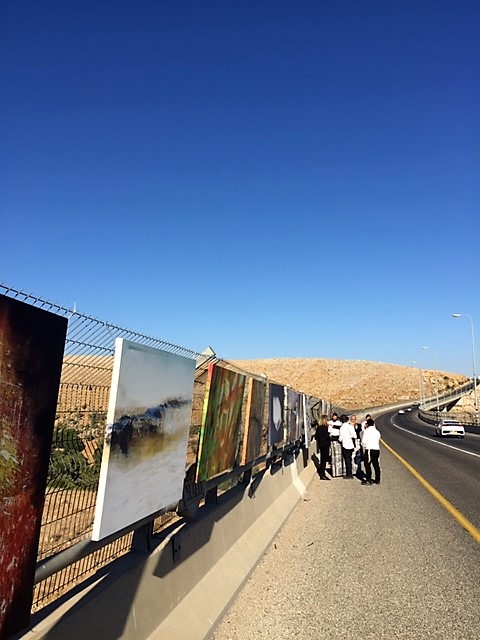