Parashat Kedoshim opens with a general call to us all:

Speak to the entire congregation of the Children of Israel and say to them: Be holy, for I, HaShem your God, am holy.

We’re called to emulate HaShem in His quality of kedushah, usually translated as holiness – but what does that mean? The midrash Torat Kohanim defines it as to be “פרושים– separated,” understood by the commentators as separating ourselves from base passions and crude behavior. But does this negative definition really convey the full meaning of kedushah as a mode of being that emulates God?

Rabbi Pinchas ben Yair, in his famous description of the step-by-step process of moral and spiritual growth, includes among the ten steps: “נקיות מביאה לידי טהרה וטהרה מביאה לידי פרישות ופרישות מביאה לידי קדושה – cleanliness brings to purity and purity brings to separateness and separateness brings to holiness…” (Mishnah Sotah, 9:15) Separateness, in the sense of ascetic abstinence, is a prerequisite for holiness, but is not holiness itself.

In Yeshayahu’s most exalted prophetic vision he witnesses the angels praising God:

And they called one to the other and said “holy, holy, holy is HaShem of Hosts, filling the whole earth is His Glory.”

It can’t be that God’s kedushah is merely ascetic restraint and separation. Targum Yonatan paraphrases in Aramaic:

…Holy in the exalted heights, the place of His Presence; holy on the earth, exercising His power; holy for ever and ever of ever…

Yonatan ben Uziel says God is “holy in” and “holy on,” not separated from. In Yeshayahu’s vision, kedushah, whatever it is, is a positive quality in all dimensions, that issues in world-filling Glory.

Several commentators work at defining the full, positive meaning of kedushah, and the call to all Israel to be kedoshim. Rabbi Shlomo Wolbe in his Alei Shor says:

To the extent that we transcend negative inclinations and bestial behavior we reveal within ourselves a spiritual world from which flows nobility and good counsel and wisdom in all the paths of our lives. When we live within this inner world, we merit the positive kedushah that a mortal human being can attain, and in this way we fulfill “just as I am holy, so you, too, be holy.”

According to Rabbi Wolbe, holiness, in the positive sense, is to live a morally and spiritually thoughtful and wise life. The whole of Parashat Kedoshim proves his point – it consists of one mitzvah after another emphasizing thoughtfulness and care in the way we treat all others and integrity in the way we comport ourselves. He adds that this quality of kedushah enables a person to internalize Torah to such a deep, autonomous level that “they learn Torah from themselves.” This is what is means to be holy.

Rabbi Yaakov Leiner, in his Beit Yaakov, says that “kedushah is that all your actions are according to the path of truth, and that you invest extra thoughtfulness in all your actions.” When one lives this way “one does not do anything meaningless, so that you can draw to yourself awareness that ‘I, HaShem, make you holy’ (Parashat Kedoshim, sec. 7).” He expands upon the connection between the holiness of HaShem Himself and the holiness to which HaShem calls us – that we become a vessel for HaShem’s kedushah, with a radical understanding of the nature of “separation” as a prerequisite for this process:

Kedushah is that the vessel is filled with its life. And the essential vessel for kedushah is the person who is not tied to any particular quality or manner, but rather stands always ready to receive what HaShem, blessed be He, will enlighten him with. For a person who is tied to any specific quality and manner is not ready to receive the enlightenment of HaShem, for when HaShem enlightens he will need to remove from himself that to which he was tied until now. Only someone who is not bound to any one quality… is a vessel for kedushah… (sec. 3).

The state of kedushah, for Rabbi Leiner, is to be fully aware, fully thoughtful, fully intentional, fully alive. Such a person has a lively spiritual flexibility, not stuck in tracked thinking or tracked behavior, rather “separate” from any fixed quality and therefore ready to receive direction from HaShem at every moment. It is kedushah on the human level, a fullness of life that flows with God’s holy, holy, holiness that fills all the world with His Glory.

This week Earth Day is observed around the world, and it’s taken seriously here in Israel as well. Numerous nature and eco-organizations band together encouraging volunteers to fan out around the Land to clean up garbage and waste and demonstrate that we care for this precious Land and this precious world that HaShem has granted us. Unfortunately, there’s a lot of work to do. May we all learn the true, positive meaning of kedushah, to act with thoughtful care in everything we do, and fulfill HaShem’s call to us: Be holy, for I, HaShem your God, am holy! 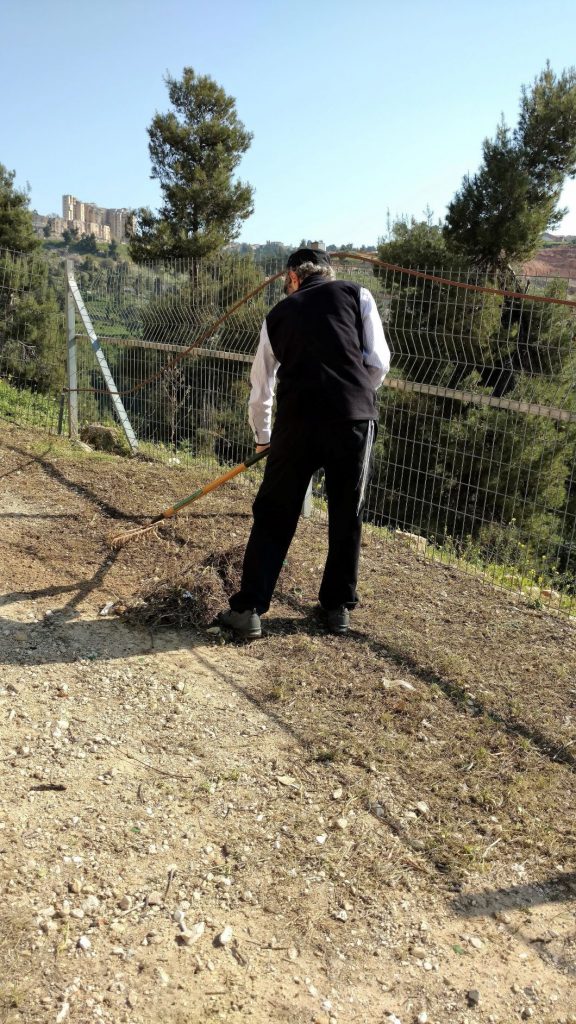