This week Tzfat really rocked. It was the week of the annual Klezmer Festival, three days and nights of music all over town. Five main stages at main kikarim or town squares feature headline musicians performing simultaneously for hours, with many local performers popping up on street corners and in alleys. Music is everywhere. There’s classic Klezmer from Eastern European cultures, and modern Klezmer interpretations, but also Mizrachi, North African, and Persian music, and Israeli pop of all kinds. The diversity of music reflects the diversity of the crowd. The streets and alleyways are packed with people from all over Israel: Ashkenazim and Sefardim, Sabras, Russian and Eastern European Jews, French Jews, Ethiopian Jews, North African and Middle Eastern Jews, and Anglo Jews, including us.

The main events begin at nightfall and go to 1:30 or 2:00 in the morning, and the crowds continue strong. Along with teens and twenty-somethings and middle age adults there’s many seniors – and young children. Wide-eyed, wide-awake toddlers are staring with wonder and delight (and perhaps some bemusement) at the crowds, the street vendors, the performances, and the fireworks. Parents are schlepping their kids from one venue to the next well after midnight. Come 2:00 AM, people start to trickle home or back to buses that take them to their hotels or their cars, and you hear the occasional guitar and groups of teens singing together in the streets on towards daylight. Then the town goes quiet for a few hours, everyone sleeps in a bit, and then they start all over again. Three days of music right after the Fast of Tisha B’Av – a cork pops from the bottled-up feelings and virtual champagne flows everywhere. Nachamu Nachamu Ami.

The performances are mostly first-rate, some spellbinding, some breath-taking. There are highly polished choreographed acts and there are improvisational jams by master musicians having great fun together and with the discerning audience. There are schmaltzy Yiddish acts and precise academic performances that specify from which town in Poland or Romania or Hungary each song and style comes from.

But most impressive was the audience. Tzfat was jam-packed with people from end to end – busloads come in from all over the country. In many situations, this could be dangerous. But from start to finish the crowds were well-behaved. There was no rowdiness, very little alcohol – a few cups of beer here or there. Factoring in the usual Israeli forthrightness people were downright considerate and solicitous of each other – especially for the young and the elderly. And there was pure joy. When a band struck up a traditional tune from Russia, the Russians sang along with gusto and delight. When a Middle Eastern ensemble got rocking, the Mizrachi Jews and Sabras got up singing and dancing. And when Yonatan Razel, one of the top pop Israeli singers at the largest of the main stages, sang his well-known and moving song to the lyrics from the Haggadah of Pesach,

the thousands of Jews from all over the world sang along together. The melody is in a minor key, gentle and moving, poignant. Thousands of Jews singing these words together at midnight up into the summer’s night sky over the Land of Israel, singing it over and over together sweetly, not with defiance but with gentle sadness and hope, fully aware of its ancient and current meaning – you can feel the endless depth of the Jewish soul, you can feel Heaven open to the human heart.

One of the virtuoso klezmer violinists, Bea Sharon, who was jamming with a virtuoso accordionist, made an observation that stuck with us. She was tuning her violin between songs and pointed out that because the violin does not have frets, it’s not just a question of getting the instrument in tune. Each time a violinist presses her finger on the string she is searching for the note. Each time, she has to make subtle adjustments to get just the right pitch. She needs to do this to be able to attune her own playing to those playing and singing with her. It’s a great image, and gets to the heart of the power of music. In music, especially group music when everyone is playing and singing together, we all attune to each other. We synchronize to each other musically, emotionally, personally. Music binds us together, elevates us together. A recent sociological study confirms that people who attend concerts regularly, or share music in some form together regularly, singing together and dancing together, experience a higher degree of happiness and well-being. This includes Zemirot at the Shabbat and Yom Tov table, or Simchat Torah and a Chatunah.  This ability to attune to each other – to listen to each other and adjust ourselves to each other to form a cohesive group for a high purpose – this is one of the most precious human qualities.

In Mishnah Berakhot, 7:3 there is a discussion of what formula is used for the introductory invitation, the Zimun for Birkat ha-Mazon, depending on how many people make up the group eating together:

The point of the Mishnah is that for a cohesive group engaged in a holy purpose, the larger the group the deeper the revelation of HaShem’s Name. Though the practical halakhah does not follow this opinion, it still expresses the potential for a group of spiritually-attuned people to raise each other to higher awareness. This principle also appears in this week’s parsha, when Moshe tells Am Yisrael:

Rabbi Hayyim Ibn Attar in his Or ha-Hayyim comments: “when your hearts desire Him and His Mitzvot, He is your God in oneness, as the Rabbis say on the verse “He is enthroned upon the praises of Israel (Ps. 22:4) …For He has chosen to unite His divinity with Israel, and therefore He is praised, not as God of Heaven or God of Earth or God of the Angels but as God of Israel.” 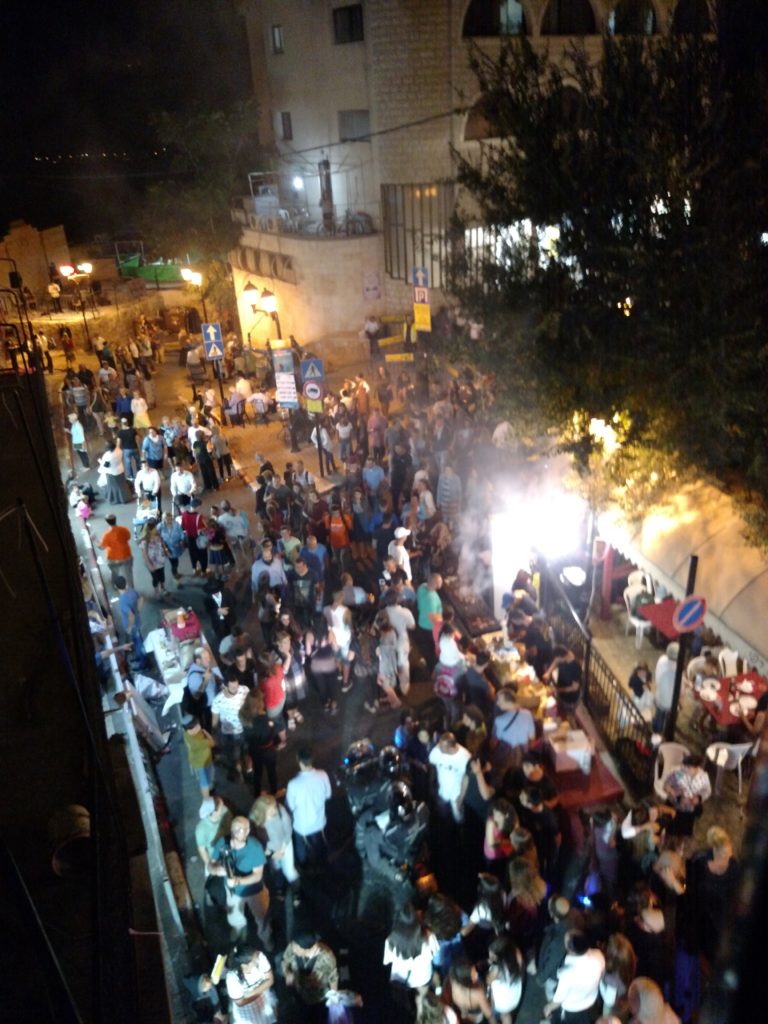 The Amcha traveling from one venue to another

2 thoughts on “Finding the Right Note”