We know that Mailchimp didn’t pick up last week’s post to send out. Hopefully, this week will not experience any glitches. If, for some reason (traveling, between time zones?) you do not receive the post, you are welcome to visit our website and view the latest post, as well as previous ones!

We’re back home in Tzfat after two weeks in the States. The trip was good, seeing family and friends and working with some wonderful groups, but it’s also good to be home in our quiet, pastoral neighborhood. Though in the back of everyone’s minds is that just over the border, about 24 kilometers (15 miles) to the north, over 100,000 missiles are pointed at us. There was a brief flare-up of hostilities over the last few days, but things have quieted for the moment.

One of the first things we did when we got back was to replace the Israeli flag that is posted at our gate. Our home is on top of a mountain and the wind blows hard here. It rips flags to shreds – in the two years we’ve been here, we’ve replaced the flag half a dozen times. The wind can be bitter in the winter, but now, in summer, it’s one of the fine features of our neighborhood, making it pleasant even in the really hot weather Israel has been having. Sometimes a problem can become a great advantage.

We had an illustration of this on our trip in the U.S. We took a long family drive from Los Angeles to Yosemite National Park and decided to stop off on the way to break up the drive with some point of interest. We had seen a notice for a roadside attraction in Fresno called Forestiere Underground Gardens – it sounded like cheesy roadside Americana and we were game for it, but when we got there we were quite surprised. This is acres and acres of gardens and passageways and a complete home, tastefully, even artfully built – but below ground level, by Baldasare Forestiere over the course of forty years, from 1906 to 1946. Why below ground level?

Forestiere was an immigrant from Sicily. Back in Sicily his family cultivated citrus groves, and he figured to do the same in America. He landed first in Boston, where he worked on digging the subway system, learning to handle a pickaxe. He scraped together enough money to move to California, where he heard that farm land was being sold for citrus orchards. He couldn’t afford the prices in Orange County, so he tried the Fresno area, which was being advertised to immigrants as fertile land good for citrus. With his entire savings he bought eighty acres, but when he tried to start planting trees, he found that everywhere he dug there was only a foot or so of topsoil, and right underneath was five to ten feet of hardpan. Hardpan is formed by mineral deposits which bind soil into a substance as solid as cement and impervious to water. He had been scammed and all his money was gone. But rather than give up, he pulled himself together. He had learned a skill in the Boston subways – how to use a pickaxe. So he began to chip through the five to ten feet of hardpan, and bust through it to fertile ground underneath. And as he chopped through the hardpan he cut carefully – if it’s as hard as cement, he reasoned that it would make good building material, so he cut it into even, well-shaped blocks to use for building walls. He started with building a home underground, which had the advantage of being cool in the hot Fresno summers, when temperatures reach consistently over 100 degrees, and it was well insulated in winter. Then he built his citrus orchards, planting the trees about twelve to fifteen feet below ground level, with openings carefully shaped to let in sunlight and deflect and gather rainwater. The leafy tops of the trees reached just above ground level, and this had the added advantage that he could harvest his oranges and lemons and grapefruits and citrons without a ladder, just by walking above ground around the holes for each tree. His orchards are still going strong, tended by the following generations of his family. And he connected the orchards and the expanded rooms of his home with underground passageways. We found his story inspiring. Baldasare Forestiere faced into his setback, pulled himself together, and turned it into a great advantage.

This principle, that a problem or deficiency can turn into a great advantage, is also central to the process of Teshuvah which is the spiritual focus of this month of Elul, in preparation for Rosh HaShanah and Yom Kippur. Rebbe Gershon Hanokh Henekh references the section in this week’s parashah in which Moshe Rabbenu assures Israel that they will have the guidance of prophets to provide spiritual direction. As opposed to magicians and necromancers who pretend to predict the future through psychic arts, prophets receive true communication directly from HaShem. Moshe warns the people not to listen to someone who speaks in the name of God but has not really received a prophetic message, and he anticipates an objection that we might raise:

But if you will say in your heart “how will we know that the word was not spoken by HaShem?”

Moshe’s answer is that if someone claiming to be a prophet makes a prediction and it does not come true, he is not a prophet. Clear enough if you can wait, but in the Gemara Sanhedrin (89a) the Rabbis discuss how to discern whether a prophet has received a true message from God when you need to make a decision right away about a course of action to take and can’t wait to see how things turn out. Rabbi Yitzhak gives a sign: if several prophets all agree and issue their prophecy in the same terms, it’s a sure indication that they are lying. This sounds counter-intuitive: we usually think that greater consensus means greater truth. But Rabbi Yitzhak’s rule is: God sends His message in the same terms to several prophets, but no two prophets prophesy in the same terms. Rabbi Gershon Hanokh brings his grandfather, Rabbi Mordechai Leiner’s explanation: that when it comes to the Word of God, and to essential Torah, each person must receive it and express it in their own terms, from the root of their own soul. He says that at the heart of each person, the root of our soul, is a vulnerability, a weakness, that makes us unique, but:

This is because the whole purpose of Torah is to help repair and heal the weaknesses of our character. Only that prophet who is honest with him or her self, in full awareness of the limitations and weaknesses of his or her own character, can receive God’s Word in truth in the vulnerable core of their soul, and transmit it in truth from the vulnerable core of their soul, in their own unique way.

And this is so not only for prophets but for all of us. The process of Teshuvah is to examine ourselves honestly and face into our weaknesses and deficiencies and problems. As we work to repair our problems we learn about how intimately HaShem assists us and discover the depths of our own resilience and power to heal morally and spiritually: “wherever there is found a deficiency, there is hidden in its depth great preciousness.”

After raising our brand new Israeli flag, we found a story about the last battle of Israel’s War of Independence. On March 10,1949, soldiers from the Negev brigade were ordered to conquer Eilat, with it’s opening to the Red Sea and the Indian Ocean. After the British and Jordanians fled, the Israelis secured the city without a fight. But they didn’t have a flag with them to declare Israeli sovereignty, so the commander of the unit, Nahum Sarig, ordered one made. They took a white bed sheet and found some blue ink, and cut a Magen David from a medical kit, and sewed and painted the flag. Avraham Adan, an officer in the unit, climbed up the pole with the help of his fellow soldiers and flew our national flag, raising it high as he could. They then sang our national anthem “Hatikvah” and sent a telegram to the military leadership says: “pass this message to the government of Israel: the Palmach’s Negev Brigade and the Golani Brigade present the gulf of Eilat to the State of Israel”. The ink flag that was hoisted, even more poignant, more eloquent in its makeshift simplicity, symbolized the end of the Independence War and presented this truth to the entire world: out of the ashes, the nation of Israel lives, and with HaShem’s help, we will continue to face into our challenges and come through stronger than ever. 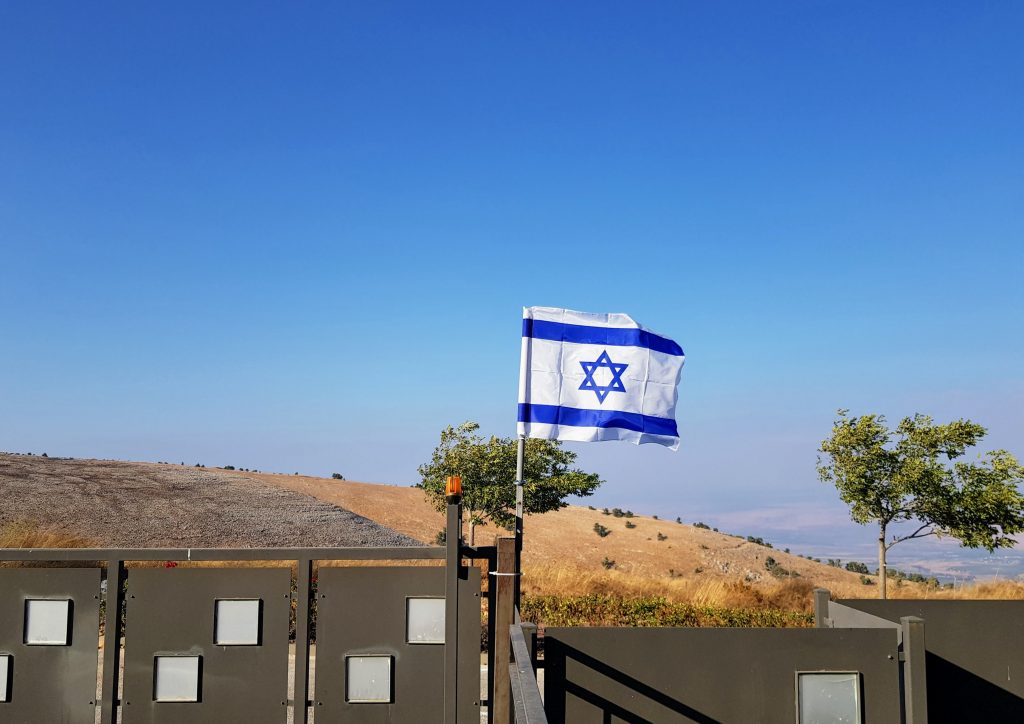 Our new flag, still with creases! 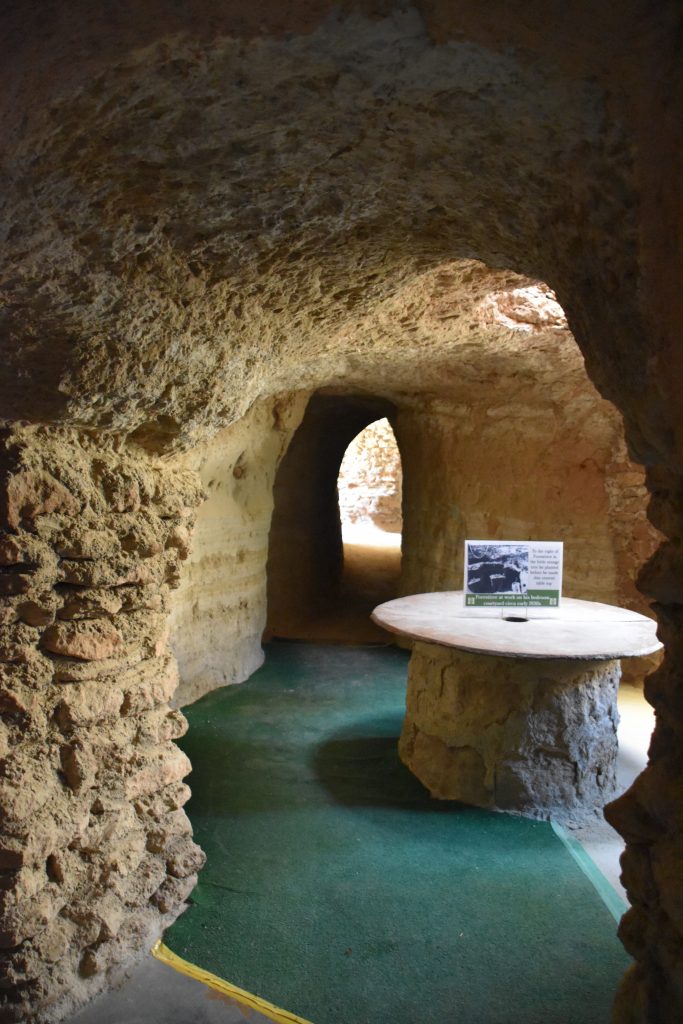 One of the internal tunnels, all dug by hand by one person 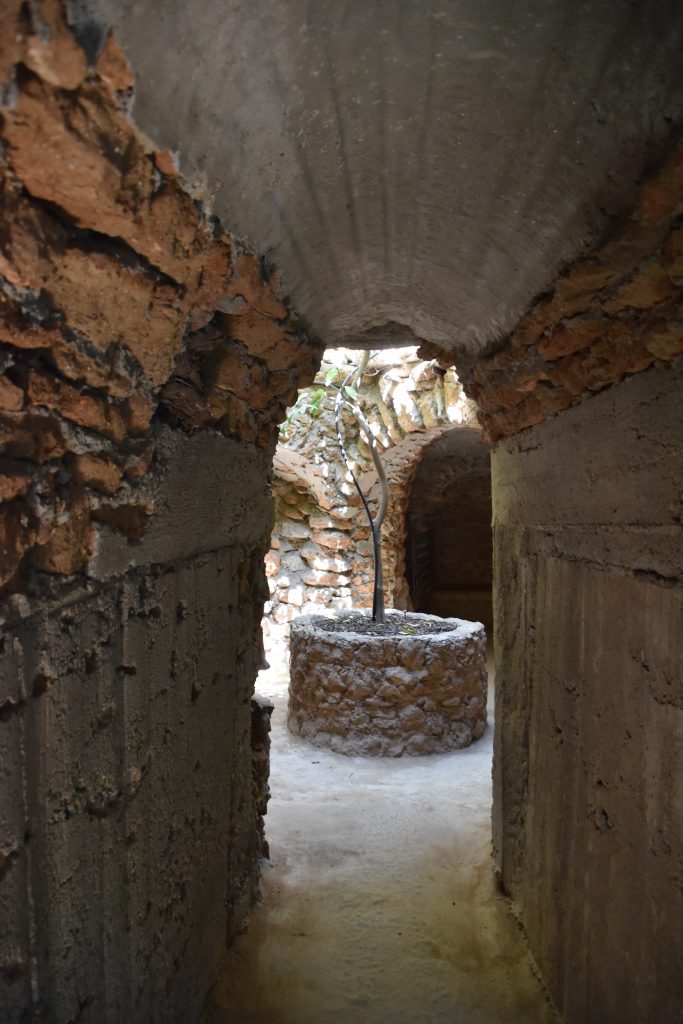