Heidi Wyle, a friend of ours, is a principal with a startup in China and reported first-hand in a powerful op-ed last week in the Boston Globe on the way the Chinese have responded to the coronavirus crisis which irrupted in their midst. Once the problem was acknowledged, belatedly, the government put in place strict protocols to manage the epidemic, with extensive and extended quarantines and quick construction of dedicated medical facilities for areas of outbreak, and with restrictions on travel and checkpoints and internet surveillance to enforce compliance plus rigorous testing monitoring for symptoms in regions not yet affected. These measures seem to be effective in slowing spread of the disease and have enabled most people to continue to work and go about their lives very, very carefully. Our friend wonders, at the end of the article, how other nations such as the United States will handle the virus.

China’s government lacks transparency, which made it slow to acknowledge and alert its populace to the threat and lost them valuable time during which they could have contained the virus in the early stages of breakout. But its authoritarian regime, together with a generally obedient populace that has a strong sense of civic duty, has enabled them to respond with discipline once they faced the crisis squarely, and that seems to be effective in slowing the spread within China itself. Cultures like Israel, the United States and Western Europe have transparency in government and the media, so their citizens were alerted right away. These democratic societies and their free, capitalist economies also place value on initiative and creativity, so bio labs and pharmaceutical companies have been racing to develop vaccines and diagnostic tests. But the sense of civic duty and obedience to even beneficial restrictive measures is undercut by a sense of entitlement and a right to individual liberty, and up to this point it has proven difficult to fully enforce quarantines and other restrictive measures. Then there are societies that are neither transparent nor disciplined nor free nor creative, and they are really struggling and will be severely challenged. How effectively the societies of the world will deal with this serious threat is a function, not just of levels of medical expertise, resources and facilities, but also of political, moral and spiritual culture.

Perhaps the most fundamental value that would be helpful to humanity at this point is one symbolized in this week’s parashah. In context of the account of the building of the Mishkan, the parashah turns to the Kohanim who will serve in the Mishkhan – their vestments and the procedure for their investiture. The Gemara Erkhin has a discussion on the meaning of the various garments:

It’s not immediately clear how the garments of the Kohanim effect atonement. The term “kapparah” is usually translated “atonement,” but that’s an archaic word of uncertain meaning. But “kapparah” essentially means cleansing, cleansing from the lingering effects of transgression. We have a gut sense of how sacrifices might be considered to cleanse from transgression – it’s a kind of substitution, by which the sacrificed animal stands in for us and our souls. With animal sacrifice something seems to happen – the animal dies in our place. But how does a Kohen wearing an item of clothing effect a cleansing? Rabbi David Aryeh Mandelbaum suggests that the colors and beauty of the garments worn by the Kohen remind us of our higher nature, and remembering and fulfilling our higher human potential is the most direct and effective way to cleanse from transgression. (Daf al Daf, Zevachim 88b)

The golden garments of the Kohen Gadol are ornate, woven with golden thread and royal colors and sparkling with precious gems. Rabbi Isaiah Horowitz in his great commentary Shnei Luchot HaBrit explains that with these shining garments the Kohen Gadol is intended to represent Adam, the first and archetypal human being, of whom the Zohar says:

The original human beings, Adam and Eve, were composed of all the elements of the creatures created before them, of the upper and lower worlds. In their being they comprised everything and their radiance illuminated the entire world – meaning that their existence and their behavior impacted every creature in the world. As Rabbi Hayyim of Volozhin explains in Nefesh haHayyim (Part 1), that Adam and Eve, and all human beings, are created in the “image of God” means specifically that each of us, in the fullness of our being, is created from all, has impact on all, and is responsible for all. This is not an exaggeration or overstatement intended to encourage us to moral behavior. Each one of us really is connected to all people and all creatures of our world and that confers upon us a profound responsibility.

The Kohen Gadol in his service in the Mishkan, helping others to improve and perfect themselves morally and spiritually, represents Adam, the essential human being, who takes upon himself the responsibility “to serve and to protect (Gen. 2:15).” The Kohen represents the morally and spiritually mature human being whose essential quality is a sense of profound responsibility for all people and all beings.

Similarly, in the Megillah that we will read on Purim next week, the turning point in the crisis that threatens all Jews is when Mordechai warns Esther, who is sequestered in the royal palace:

Mordechai said to reply to Esther “don’t imagine in your mind to escape in the house of the king from [the fate of] all the Jews. If you are actually silent at this moment, respite and salvation will arise to the Jews from another place, and you and your father’s house will be destroyed. And who knows whether it was for a moment such as this that you arrived at royalty.

Esther proceeds to step up, take responsibility with initiative, insight and wisdom, and start the process of salvation rolling.

The present world-wide health crisis is a graphic illustration of the principle of responsibility.  If a person coughs or sneezes in China, people in every corner of the globe are at risk. When a person does not obey guidelines for quarantine, they endanger the lives of others all around the planet. On the positive side, efforts to find a vaccine are being fast-tracked with the intent to share the results with all human beings of all nationalities, because we are all in this together. Our world has been suffering from terrible tribal conflict, fractured into antagonistic groups committing violence over territory and illusory values. Maybe, just maybe, our experience fighting this virus together can teach us to appreciate our common, shared humanity and help us learn to work together to become “a single bond” to take responsibility for each other with empathy, compassion and respect. 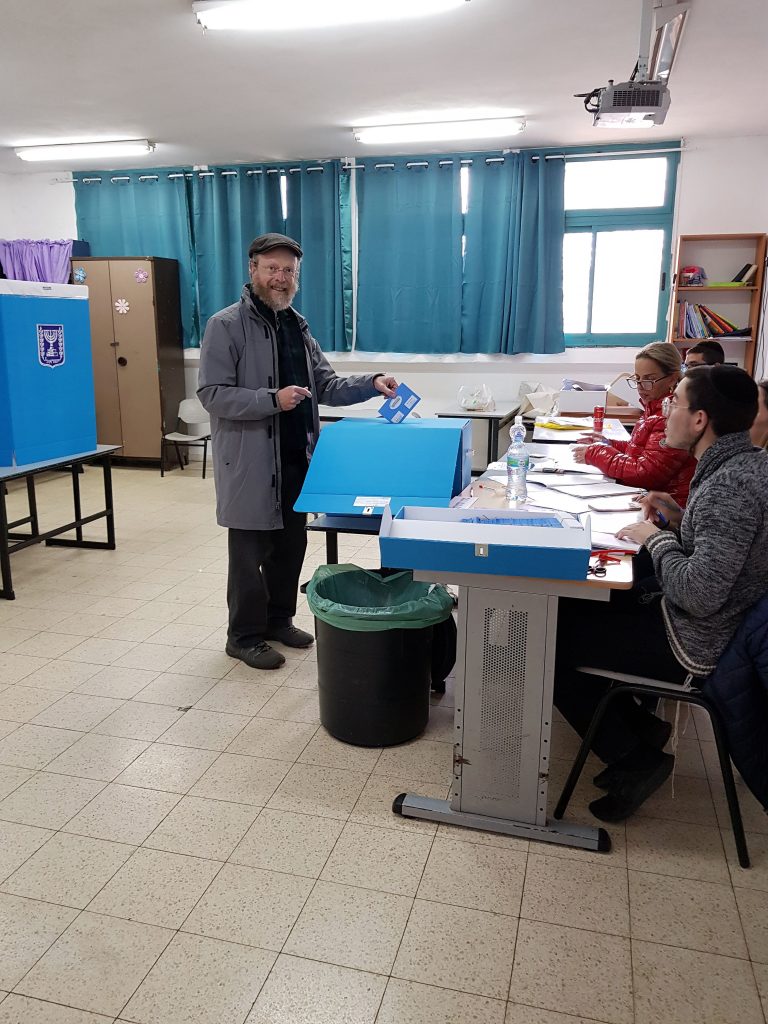 Taking responsibility by voting in the Israeli elections. Hoping and praying that the government officials do their part!