This Shabbat is also Tu B’Av, the fifteenth of the month Menachem Av. Following the mournful period that just concluded with Tisha B’Av, in contrast, Tu B’Av is one of the most joyful days of the year, as it says in the Gemara Ta’anit 26b:

Rabban Shimon ben Gamliel said: there were no days in Israel as good as Yom Kippur and the Fifteenth of Av, on which the daughters of Jerusalem would go forth in borrowed white dresses, so as not to embarrass anyone who did not have… The daughters of Jerusalem would go forth with circle dances in the vineyards. And what would they say? “Young man, lift up your eyes and see who you will choose for yourself. Don’t set you eyes on beauty, set your eyes on family, for “grace is false and beauty is vain, but a woman who fears HaShem, she shall be praised,” and it says “give her the fruit of her hands, and praise her in the gates (Prv. 31).”

The days of Yom Kippur and Tu B’Av were dedicated to joyful match-making. Why these days in particular? Solemn Yom Kippur might seem an unlikely choice, but the Gemara explains it’s a day devoted to forgiveness – people rid themselves of animosity and grudges against each other, so it’s a good day for bringing people together and building families.

For Tu B’Av the Gemara offers several reasons. It was the expiration date of the biblical decree that women who inherit property should marry a man from their own tribe, a temporary decree designed to last only for the first generation that entered the Land of Israel with Yehoshua, to establish the tribal inheritances. So Tu B’Av was the day on which all the tribes of Israel were once again permitted to freely marry among each other.  It was also the day of the nullification of the divisive edict promulgated by king Yerovam ben Navat prohibiting the inhabitants of the Northern Kingdom from joining in the pilgrimage festivals in Jerusalem, in the Southern Kingdom. So Tu B’Av is also a day of unification, bringing people and families together. This is beautifully symbolized in the details brought in the Gemara: that all the young women, no matter what their family’s economic status, would all wear white dresses that were borrowed, so everyone could dress the same and erase all distinctions of wealth or class; and that they danced in circles, an expression of unity.

Social solidarity is a challenge today, not only between antagonistic religions, cultures and nations, but within many societies. Israel is going through a particularly fractured political period. Tribalism and territorialism are among the most primitive human instincts, one we share with many animal species. If tribal divisiveness is rooted in our animal nature, then what is it that brings us together?

In this week’s parashah Moshe Rabbenu approaches this issue from a number of perspectives, all intended to reinforce among the tribes and individuals of Israel a sense of shared history, shared values, shared destiny. But ultimately it comes down to one essential reality, one of the climactic points of the parashah that Moshe emphasizes:

Rabbenu Bahya Ibn Pakudah in his Duties of the Heart notes that this mitzvah doesn’t just state that God is one Deity as opposed to many deities. “One” is not meant numerically, but as an absolute, real singularity he notes is impossible for the human mind to comprehend (1:10). Maimonides endorses this approach in his Mishneh Torah and his Guide of the Perplexed (1:57) and clarifies that God’s singularity embraces all of reality:

He brought forth every existent, and all existents from Heaven to earth and what is between them only exist from the reality of His existence.

Maimonides means that God is the only real existent, and all other beings are contingent upon His existence. He summarizes this point with another verse from this week’s parashah:

Maimonides’ reading of this verse is radical. It’s not just that there is no other deity but HaShem. There is no other real existent at all but HaShem. This is not to say the world is not real. It’s completely real, and that itself is amazing, but its reality is totally dependent on the absolute singular reality of God, creating and providing the inalienable cohesion of all reality. The kabbalists express this insight differently, speaking of the Upper Unity and the Lower Unity. The Upper Unity is God’s absolute singularity itself, which is entirely beyond human comprehension. The Lower Unity is the unification and cohesion we can sense, if we are sufficiently aware, among all beings and phenomena of this world, which is rooted in and totally dependent on God’s higher, absolute oneness.

To appreciate the unity of all of reality and all beings takes quiet, insightful, expansive consciousness and an open heart. It’s hard work, requiring us to see through habits of mind that overlay limiting concepts and project limiting categories onto the world and beings we perceive. Conceptual thinking has its utility, but it can also trap us in narrow mindedness. With our conceptual thinking we push things from us, we push each other away, and even push God away from us as we try to grasp Him with little ideas in our little minds that end up interfering between God and us. The mitzvah to affirm God’s Oneness orients us theologically to God, and ethically to each other. How could we possibly harm another human being, or any being wantonly, knowing we are all part of God’s amazing singular reality?

In the Gemara Berakhot (6a), Rabbi Avin bar Rav Ada says in the name of Rabbi Yitzhak that the Holy One, blessed be He, wears tefillin. It’s a wild anthropomorphism meant to be understood metaphorically, and the Zohar, for instance, offers some profound mystical interpretations (e.g. Shir haShirim 64d). But in the Gemara, playing along seriously, Rabbi Nachman bar Yitzhak asks Rabbi Hiyya bar Avin a follow-up question:

“These tefillin of the Master of the World, what is written in them?” He answered him “Who is like Your nation Israel, one nation on the earth (1 Chr. 17).” [Rabbi Nachman challenged]: “but is the Holy One, blessed be He, praised by the praising of Israel?” “Yes,” [Rabbi Hiyya replied]… “The Holy One, blessed be He says to Israel ‘you have made Me a singularity in this world, I will make you a singularity in this world.’”

Rabbi Hiyya draws a parallel between our tefillin, which contain parchments proclaiming the unity of HaShem in the Shema, mirrored in God’s tefillin, which also proclaim unity – the unity of Israel. The point is, we are held together in God’s Own singularity. This is true of every person in Israel, and if we can remember this, we can rise above the petty bickering that has been endangering our national solidarity and security. And then we can take it further, to realize that God’s Oneness embraces all human beings, all His creatures. If we could really help each other realize this, one day we, too, all of us, all humanity, might go forth and dance circles together in God’s vineyards. 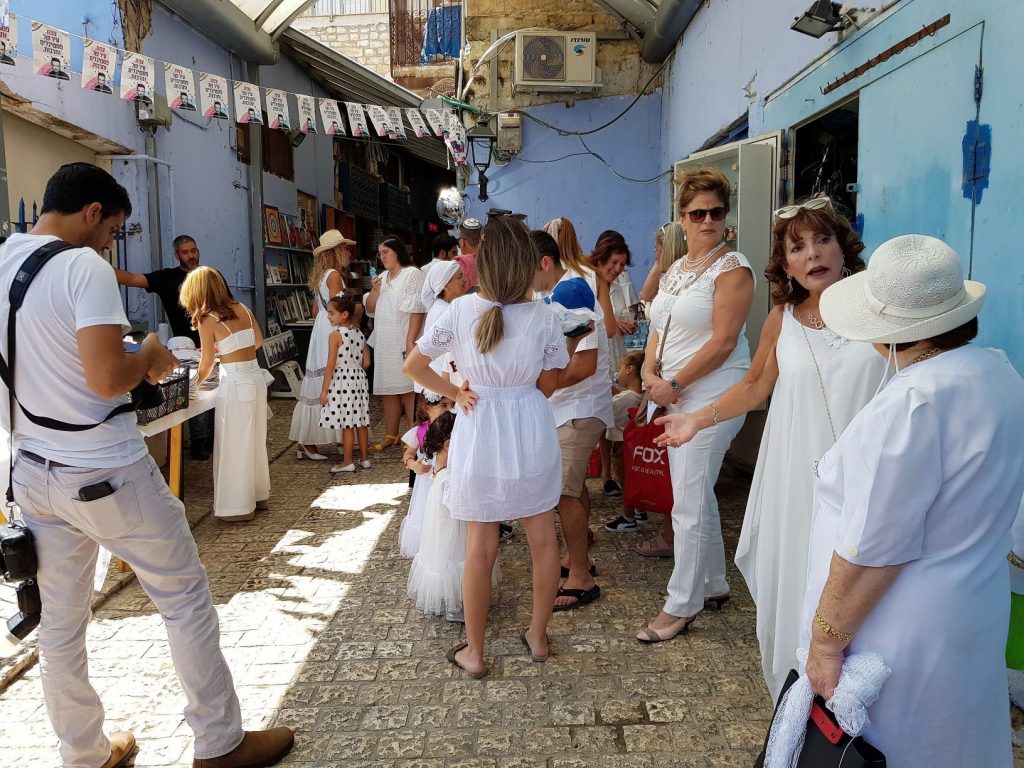