I was cleaning up our garden to get it ready for planting, and went to get rid of a two-foot high stone lawn decoration in the shape of a lion, left by the previous owners. I had noticed it when we first moved in, but hadn’t paid much attention, figuring it’s not our taste, I’ll dump it eventually, but it wasn’t a priority. Now when I looked more closely I realized the lion had wings in a style reminiscent of idols of the ancient Middle East. Checking online, sure enough, it’s a copy of an Assyrian and Babylonian idol representing what they considered a protective deity. It was later taken over into Christian iconography. Previous owners of our house probably got it at a garden store that sells lawn statuary, not realizing what it represents.

Halakhah distinguishes between statues made for idolatrous worship, which are absolutely forbidden to own or benefit from, and must be destroyed, and those made for decoration (Gemara Avodah Zarah 40; Mishneh Torah Hilkhot Avodah Zarah 7:6). Rabbi Yoel Sirkis prohibited even decorative images of lions or bulls, however, because they are Zodiac symbols (Bayit Hadash Y.D. 141). One way or another, I didn’t want this thing on our property, but when I tried to move it, it was much too heavy for me. Some guys who had been working next door had just finished for the day so I asked if they could give me a hand, maybe the three of us could lift it. The older one said it would be enough to deface it. But the younger, a big, muscular guy, said no, we have to smash it completely, and proceeded to lift up the statue himself, lug it out to the field next door, throw it against a boulder and smash that sucker to smithereens. The worker felt it was a righteous start to the new year, and I agreed – it felt good getting that thing out of our yard.

Getting rid of noxious things is an essential part of the avodah of Yom Kippur. The Viduy, the confession we repeat throughout the day, that Maimonides considers the mitzvah action of Tshuvah, is a means of identifying our negative behaviors, externalizing them in words, and letting them go cathartically. Really, the entire liturgy and ritual of Yom Kippur is a way of externalizing the very interior process of self-repair that is the hard work of this day.

In the time of the Beit HaMikdash, this externalization was enacted most dramatically in the ceremony of the Se’ir ha-Mishtalei’ach, the so-called Scapegoat. The Kohen Gadol would place his hands on the goat and confess the sins of the Jewish people, as if loading those sins onto the goat. Then the goat would be turned over to a man who would lead it out of the Mikdash eastward into the wilderness and ultimately push it off a cliff, to get rid of those sins symbolically and decisively. The Mishnah Yuma (66a) says that at a certain point it was decided to build a ramp, Rashi describes it as a high bridge, from the Mikdash eastward out across the valley to the mountains, for the man and goat to walk on, high above the throngs gathered to witness the Yom Kippur ceremony at the Mikdash. The purpose was to protect him from the “Babylonians,” – or “Alexandrians” according to Rabbah bar bar Channah in the Gemara – simple, unlearned Jews who took the loading of their sins on the goat literally and seriously. They would harass the appointed man, pulling his hair and urging him to get going, saying to him “take and go, take and go (Yuma 66a,b).” Rashi paraphrases: “take quickly and get out and don’t let our sins remain by us anymore.” The Rabbis of the Mishnah and Gemara apparently looked down on such boorish literalism, regarding the ceremony of the Se’ir ha-Mishtalei’ach as symbolically but effectively dramatizing a spiritual process.

But isn’t there something inauthentic and irresponsible about such externalization, even on the symbolic level? What does it mean to get rid of sins? These are harmful acts that we really committed. How can we disown or disavow them? And yet there is deep psychological wisdom here. In the Gemara Berakhot it speaks of the power of the therapeutic relationship itself and observes that we need the help of an other to heal – “a captive cannot release himself from prison (5b).” Thomas Csordas in The Sacred Self runs a phenomenological analysis on the healing process and observes that those who are ill tend to become stressfully absorbed in their pain or discomfort, and this self-defensive fixation on pain impedes healing. The doctor or therapist, just by their presence as other, even bracketing out the therapy itself, helps the patient get out of themselves a bit, and this opening helps them to lower stress and access the divinely-gifted potential for healing in us and around us. This is the basis of the effectiveness of the mitzvah of Bikur Holim, visiting the sick. In the Gemara Nedarim 39b Rabbi Acha bar Hanina says “whoever visits a sick person relieves one sixtieth of their suffering.” Just our very presence to the patient helps relieve the stress of illness, and points the patient towards the ultimate healing Other, HaShem.

Dr. Yoram Bilu, Israeli clinical psychologist and anthropologist, reported on the case of a young man who was present at a terrorist bombing at the Western Wall. Though he was not physically injured, the shock of the event put him into a catatonic state and standard treatments were proving ineffective. Dr. Bilu, observing that the patient came from a Maghrebi background steeped in Jewish mysticism, created a symbolic ritual for him based on the Se’ir ha-Mishtalei’ach ceremony, in which he had the patient mentally represent his anxiety in animal form, and imagine the animal being expelled from the fortress of his self out into the wilderness. After several sessions of this dramatic enactment, the patient was cured.

Such externalization, even if it uses images and symbols, is not magic, and not inauthentic. It is permitting the patient, who is wrapped up in the stress of their physical or emotional pain, to let go of the stress and obsession and open to healing. Similarly, in the work of moral healing in which we are engaged on Yom Kippur, we are not ignoring our mistakes. Rather, we are dealing with them resolutely and thoroughly and then permitting ourselves to let them go, send the goat into the wildernesss, to consider the lesson learned and resolved. We permit ourselves to let go of the last, poisonous residues of sins of the past and be free to embrace the continually refreshed possibilities of the present. All healing, physical and emotional, comes from HaShem at all times. Our work is to open, patiently and resolutely, to let it happen.

Getting that stone statue of the winged lion off our property and smashing it, the finality of it, was emotionally cathartic, really purifying our little corner of the Land of Israel. The traditional blessing we share with each other at this season is to wish each other “Gemar Hatimah Tovah – may you conclude Yom Kippur being sealed for good.” By allowing ourselves to feel the process concluded and sealed, we open to the present new year and really do accomplish a full moral healing together, be-ezrat Ha-Shem.

May we all be sealed for good together for a New Year filled with blessings for physical, moral and spiritual health, for Israel and for all humanity. 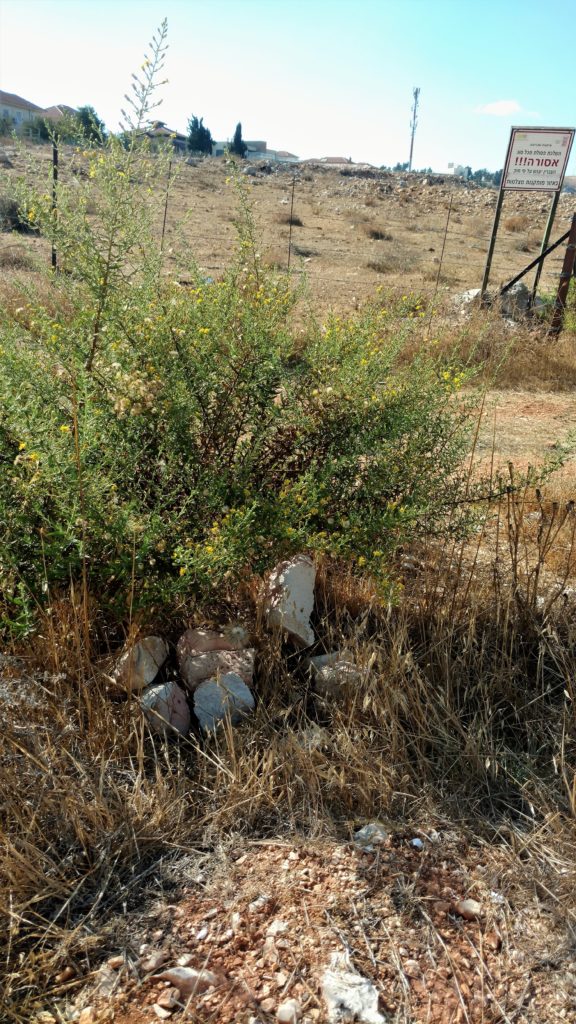 How do you say smithereens in Hebrew?