We are indeed holding online classes in Jewish Meditation. If you would like to join the introductory class, please let us know and we’ll give you the Zoom link.

It has been a quiet Yom HaZikkaron and a subdued Yom haAtzmaut here in Israel under a country-wide protective lockdown against the virus. But the restrictions on movement and the quiet have perhaps been conducive to giving more thought to the meaning of these days: the holiness of those who gave their lives for our nation, and the meaning of Atzmaut, usually translated as independence, though it’s more than that.

Parashat Kedoshim opens with a call to kedushah, usually translated as holiness or sanctity:

Speak to all the congregation of the Children of Israel and say to them: be holy, for holy am I, HaShem your God.

We sense we’re being called to an elevated state of being or behavior, but what really is kedushah? Rashi paraphrases the midrash halakhah Torat Kohanim on the parashah:

Rabbi Shimon Raphael Hirsch explains that this distancing from licentiousness is not itself kedushah, but a level of self-control over base passions that is instrumental to attaining holiness (loc. cit.).

But kedushah is not just absence of a negative inclination. When we are about to do a mitzvah we recite a blessing in which we praise God “Who has sanctified us with His mitzvot.” Kedushah is expressed through positive, divinely commanded action.

In the Mishnah Kelim (1:6-9) the Land of Israel is described as having ten levels of increasing kedushah: from the Land itself, to walled cities, Jerusalem, the Temple Mount, through the progressively inner zones of the Holy Temple, the Mikdash, to the Kodesh haKodoshim, the Holy of Holies, each level defined in terms of increasingly exclusive sacred activities that can be performed there or degrees of restriction on who can enter that area. But kedushah itself is not defined.

In Yeshayahu’s most exalted prophetic vision he witnesses the heavenly angels calling to each other, praising God as Kadosh, holy:

And they called each unto each saying “holy, holy, holy is HaShem of Hosts, the whole earth is filled with His Glory.

Kedushah is not just a human category but a quality that applies, first and foremost, to God. The climactic moment of the morning liturgy is the Kedushah of the Amidah, in which we model our own praise of God on this angelic litany, and we recite it two other times as well. This brings us back to the opening of parashat Kedoshim. God commands us to be Kedoshim “for holy am I, HaShem your God.” The kedushah we can cultivate is based on God’s kedushah. So what is kedushah?

Rabbi Yaakov Leiner in Beit Yaakov (Parashat Kedoshim sec. 3) says: “Kedushah is that which has, from itself, power and light… holiness is when a vessel is filled with its own life.” Ultimately, that comes from God. Our holiness is our wholeness. Rabbi Leiner adds that to be fully holy and whole we need to be flexibly open to receive from God in whatever way God guides us:

The flexibility and openness that Rav Leiner says is a precondition of true holiness allows us to be free to be whole human beings, not limiting ourselves by narrow outlooks but being the whole holy life and independent power we have been created to be, to be open to fulfill God’s Will in the world.

Rabbi Shimshon Raphael Hirsch expands on this in similar terms:

Rabbi Leiner and Rabbi Hirsch are describing human holiness as the fullness of human being, each of us filled with the light that we are and are meant to be. This is an aspect of the holiness of all of Creation, as explained by Maimonides in his Guide of the Perplexed (3:13):

The correct view according to the beliefs of Torah – a view that corresponds likewise to the speculative views – is as follows: It should not be believed that all the beings exist for the sake of the existence of man. On the contrary, all the other beings too have been intended for their own sakes and not for the sake of something else… In respect to every being He intended that being itself… This is what one ought to believe. For when man knows his own soul, makes no mistakes with regard to it, and understands every being according to what it is, he becomes calm and his thoughts are not troubled by seeking a final purpose for what has not that final purpose, or by seeking a final purpose for what has no final purpose except its own existence, which depends on the divine Will.

Maimonides’s point is that, in truth, every creature and being in the world it is valuable in itself, as itself. Man is not the measure of all things, as the sophist Protagoras supposed. God does the measuring, and God cares about absolutely everything and everyone, “His mercy is over all His creatures (Ps. 145).” Maimonides quotes Isaiah 43:7 in proof: ‘Everything that is called by My Name, and that I created for My Glory, I have formed and I have made.” In other words “holy, holy, holy is HaShem of Hosts, the whole world is filled with His Glory.”

Kedushah is a state of being and a state of ethical awareness. It’s the sense of being whole and intrinsically precious, and recognizing the intrinsic preciousness of every person, every creature, every being. A person of holiness respects the holiness of others and cares responsibly for all others, all people, all creatures of God’s world, because every one is important in themselves, for who they are. A person of holiness respects proper boundaries and does not use other people or other beings irresponsibly or thoughtlessly for their own base passions and does not commit violence against others, neither physical nor emotional violence. The whole of parashat Kedoshim is a detailed elaboration of this principle. As Rabbi Soloveitchik says, a truly halakhic person realizes that the whole world is infused with God’s holiness (Halakhic Man, p. 47).

This is the deeper meaning of Yom haAtzmaut, preceded by Yom haZikkaron – the Day of Independence preceded by the Day of Memory. We remember those holy ones who gave their lives for the sacred destiny of Am Yisrael in the Land of Israel and the State of Israel, who fought to protect and care for every single one of us, that we could live in our God-given Land in our God-given wholeness and freedom.

The prophet Zekhariah expresses this in his ultimate vision of the Messianic age, the ultimate Yom HaAtzmaut, a vision at once exalted and charmingly domestic:

In that day the bells on horses will says “holy to God,” and the pots in HaShem’s House will be like the basins before the altar. And every pot in Jerusalem and Yehudah will be sacred to the Lord of Hosts…”

May it come speedily, in our days. 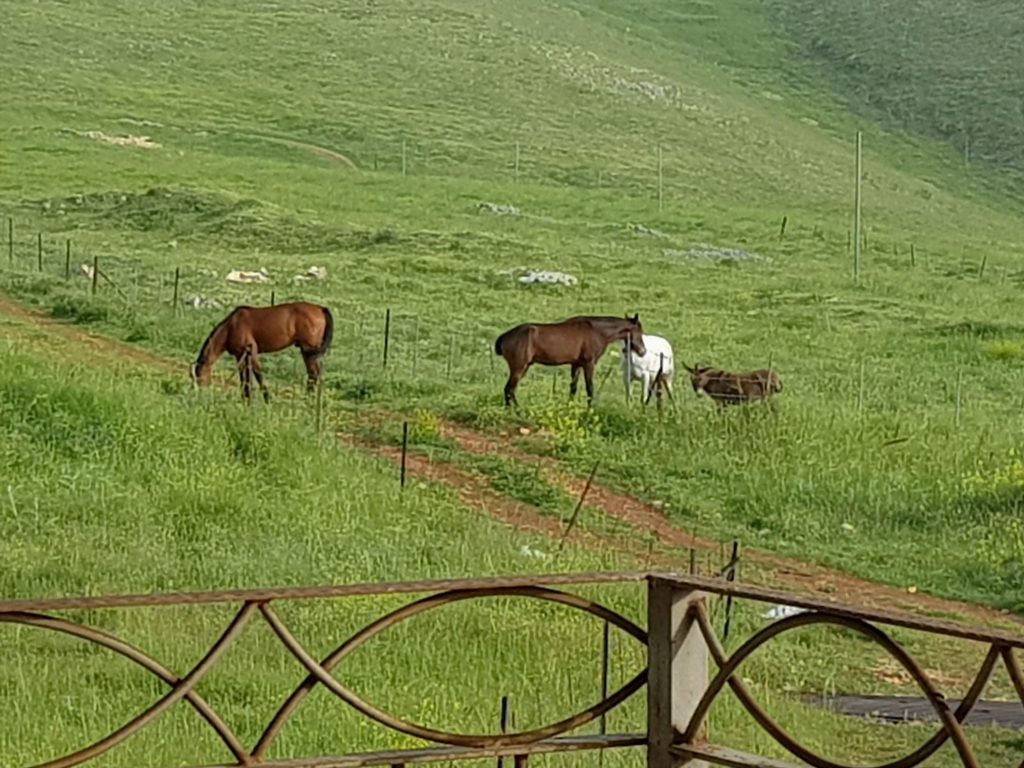