Israel’s second round of elections remains inconclusive, as Knesset members continue to wrangle over whether and how to form a unity government. Most Israelis I speak with, from a wide range of political persuasions, are tired of the gamesmanship, would like to see egos put aside for the good of the nation and very much favor a unity government. Especially in these perilous times a strong, unified government is necessary to rise to the challenges. And unity, deep unity, is also one of the essential themes of Sukkot.

In the time of the Temple, the Intermediate Days of the Festival of Sukkot were a time of high rejoicing in celebration of the ceremony of water-drawing,  the Simchat Beit HaSho’eivah. The Mishnah and Gemara Sukkah describe the festivities in enthusiastic detail, introduced with the declaration “whoever has not seen the rejoicing of the water-drawing has not seen rejoicing in his life (51a, ff.).” The Ezrat Nashim, the Women’s Courtyard of the Temple, was prepared for the all-night celebrations, enormous gold menorahs were filled and lit, thousands of people gathered, music was played on all kinds of instruments, spiritually accomplished people danced and sang, holding and even juggling torches. When dawn came, the crowds accompanied the Kohanim in drawing water from the Shiloach spring, on the southern slope of the City of David, parading back to the Temple and offering the water libations on the altar. Rabbi Yehoshua ben Hananiah says “when we rejoiced in the Simchat Beit HaSho’eivah, our eyes did not see sleep (53a),” and he goes on to describe the schedule of festivities that went all night and all day for all the Intermediate Days, such that people caught cat-naps on each other’s shoulders throughout the week.

The Gemara also quotes a cryptic remark of Hillel the Elder, that he would say during the Simchat Beit haSho’eivah:

It is taught: they say of Hillel the Elder, when he was rejoicing at the Simchat Beit HaSho’eivah, he would says thus: “if I am here, all are here. If I am not here, who is here?”

Rashi explains this as a cautionary teaching that Hillel, the Nasi, would give to the enormous celebrating crowds. According to Rashi the subject of the epigram is HaShem. Hillel is gently reminding the people in God’s Name that if they conduct themselves with holiness then God’s Presence is here in the Temple, and everyone is here. But if they do not behave with appropriate sanctity, then God’s Presence departs, and who is left?

Tosafot offers another possible reading, based on the Jerusalem Talmud – that Hillel is speaking directly in first-person about himself.  “If I am here, all are here” – coming from Hillel, known for his sincere humility, this can’t be an expression of arrogance or a cult of celebrity. Rather, understood properly, it comes from a profound existential awareness, something like the declaration of Kohelet:

“For who eats and who feels except for me?”

Kohelet, and Hillel, may be saying something about the mystery of our ineluctable, individual viewpoint, from which we experience what we experience: that we find ourselves given, a gift to ourselves, held in our individual identity, and we are not doing the giving or the holding.

Rabbi Yaakov Yosef of Polnoye, one of the great early students of the Ba’al Shem Tov, harmonizes both interpretations:

He means to say that if the aspect of Hillel is here, which is the quality of humility, that he knows himself –  that all his good actions do not come from himself but from the divine Presence, then “I am here.” Which is not the case for the opposite, if a person is arrogant… He said well: “if I am here, all are here,” for “I” has two meanings: one is the aspect of Hillel, and one is the divine Presence, which is called “I.” And both are true, for this derives from that. Understand.

His point is that Hillel was not only profoundly humble but profoundly aware, and realized that his, and our, personality is constructed and empowered by God, to the very core, through and through. Even our sense of “I,” our ownmost identity, is not something we created or even own. It’s divinely constructed to be what it is and perceive as it does. But for that very reason, when Hillel, or each of us, fully realizes that my identity, my “I,” is empowered by God, then “if I am here, all is here” is true for Hillel speaking for himself and true for Hillel speaking for God.

This mystery is also reflected in another part of the Sukkot ceremony that was performed during the intermediate days, a litany recited during the daytime while circling around the altar with willow branches. A memorial of this litany we still practice and recite today, circling around the bimah, the table on which the Torah is read in the synagogue, with the four species of the lulav and etrog and especially with the willow on Hoshana Rabba. The Mishnah describes it this way:

Rashi notes that Rabbi Yehudah’s version of this mysterious prayer invokes two divine Names of the seventy-two letter Name of God. Tosafot explains that both Names refer to the impact on God of the exile of Israel after the destruction of the First Temple. According to Tosafot, our prayer asking God for salvation is also asking “that He should save Himself.” As daring as this sounds, it’s really in line with an essential traditional understanding of the depth of the empathetic relationship between God and Israel. It says in Tehillim:

He will call Me and I will answer him, I am with him in suffering, I will release him and honor him.

The rabbinic tradition understands this radically: when Israel suffers, God suffers. When Israel is in exile, the divine Presence is in exile. This is not just some naïve and parochial notion of divine favoritism. If God’s world is not whole and perfect, if there is suffering in this world, then in some sense God’s Will is not whole. If there are human beings who are not conscious of God, and that goes for most if not all of the human race, then in a certain sense God’s consciousness is incomplete. Rabbi Yeshayah Horowitz in his Shnei Luchot haBrit spells out this principle:

Israel is called “the Congregation of Israel, for even though below they are separated from each other, nonetheless Above, in the secret of their souls, they are one unity and gathered together, for they are a portion of HaShem. But branches that want to return to their root need to be patterned like their root, that is, to be unified also below. And when there is division among them below it makes division and cutting-off Above, as it were. See how far the matter reaches (Amud HaShalom, Torah Or, end).

His point is that there is an integral relationship between God and Israel. The root of the soul, the deep structure of consciousness, reaches what is termed “the Congregation of Israel,” the collective consciousness of Israel, which is also a kabbalistic term for the divine Presence, that is, consciousness of God’s Presence. Because of this intimate relationship, the state of unity or disunity of souls impacts the divine as well. If human beings are unaware of God in truth, then by definition the divine Presence, which is the general condition of awareness of God, is diminished. This is what Hillel is saying, that if I am here, my core identity recognized as empowered by God, then all is here. And this is what Rabbi Yehudah is saying: that if there is suffering in the world, God shares the suffering and the prayers we pray for salvation ask God to save God as well.

The essential message of the water-drawing ceremony of these intermediate days of Sukkot is to help cultivate and facilitate unity among all Jews, and really among all human beings, that will enhance the awareness of divine unity as well. Water-drawing is a symbolic action for reaching deep into the source of consciousness:

And you shall draw water in joy from the springs of salvation.

The world these days is in the grip of violent tribal divisions that have caused terrible suffering, destruction and displacement.  Every effort we can make to enhance unity and solidarity, brotherhood and sisterhood among all Jews, all human beings – and among all politicians –  can have positive impact, even on a cosmic level. This is the eschatological vision of the prophet Zekhariah, also stated in the context of Sukkot: 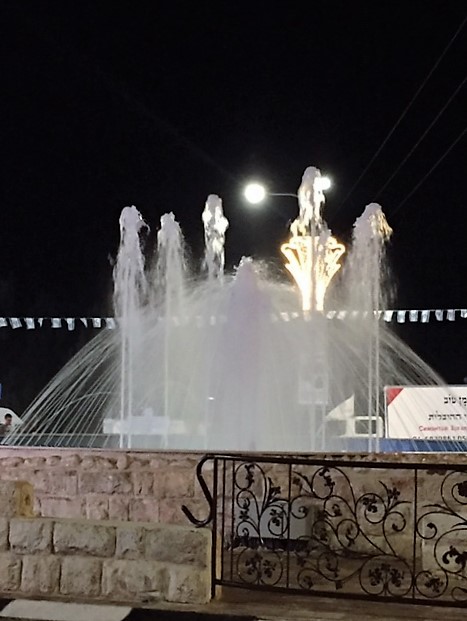 The new fountain at the roundabout near our home 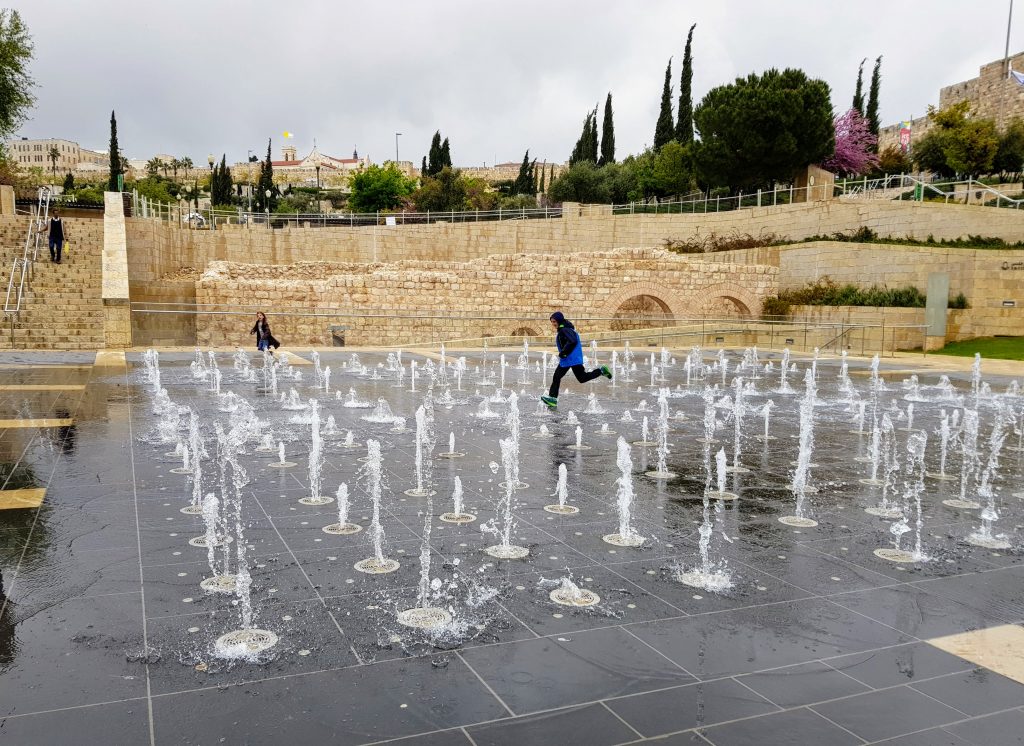 Play unites us all
At Park Teddy in Jerusalem