Our eldest granddaughter is visiting us from the States. After meeting with a cousin for a lively lunch in Tel Aviv, we were traveling back north to Tzfat along the coast and thought to stop in Caesarea to see the archeological park there, with ruins that range from Herod to the Crusades. After paying the entrance fee, we were about to head for the archeological sites when a father with two young boys just behind us asked if we had ever been to the grave of Rabbi Abahu, great third to fourth century Amora of the Land of Israel. We had never been, so we asked if we could join him. The gravesite is unusual because it’s right on the shore, a little north of the ancient port. As we made our way down to the sea, the father commented “I’ll bet when you thought to come to Caesarea today you imagined you would be coming for the archeology and a nice afternoon, not that you would be visiting the grave of a Tzaddik.” I agreed, and then thought of the verse from Song of Songs:

To the nut garden I went down, to see the buds of the river, to see if the grapevines have flowered, if the pomegranates are budding. Without my knowing, my soul set me before the chariots of my noble people.

In rabbinic metaphor, the goal of all our Torah learning, mitzvah practice and constant contemplative awareness of God is described as to become a “chariot” for the Shekhinah, a vehicle for the divine Presence in this world (Bereshit Rabbah 47, Or haHayyim on Lev 18:4). Rabbi Abahu was certainly such a chariot.

After making our way down to the shore and clambering over rocks we finally found the gravesite, built modestly into the base of a cliff right near the sea and designated with the sky-blue paint that is the traditional sign of the grave of a Tzaddik. There was a little cabinet of metal and plexiglass nearby, with books of Psalms – it’s traditional pious practice to read Psalms at a gravesite.

In Sha’ar haYichudim, Rabbi Hayyim Vital describes in detail the kabbalistic approach to visiting a Tzaddik at the gravesite. The theory is that consciousness remains eternally aware even after separation from the body. The full consciousness of a spiritually advanced person continues to ascend in awareness on the afterlife planes, and it is possible to be in communication with them and continue to learn Torah from them and with them – once a teacher, always a teacher.  It’s not a question of asking for favors – all blessings come from HaShem and only HaShem. But we can still learn together and communicate in Torah wisdom, even across dimensions. The fact is, whenever we learn the words of a Torah sage, in the Gemara for instance, we are attuning to recorded traces of their mind – we enter their thinking patterns. Actually, this is so whenever you read any book, see any movie, hear any music, enter any website created by another person – so choose wisely the minds you want to enter.  Rabbi Hayyim Vital, based on the practice of his teacher Rabbi Yitzhak Luria, the Ari z”l, recommends that when we learn we should pay attention to who is speaking in the Gemara and regard ourselves as in actual conversation with them at this moment of learning – which we are. If we don’t understand a point they are making we can actually ask them personally to clarify – and if we are open and attentive, we can receive answers and guidance. In a similar way, at the gravesite of a Tzaddik you can connect with them personally through learning and meditating on the wisdom they have expressed in Torah literature. So it’s a good idea to study their sayings at the gravesite, and even better if you can prepare beforehand. Thank God for smartphones—we were able to access many of Rabbi Abahu’s learnings as we stood right at the seashore. You don’t need to be at a gravesite for this personal connection, but being there does give you a poignant awareness that this person really lived.

Rabbi Abahu was a top student of Rabbi Yochanan of Tiberias, and he became a major Torah leader and halakhic authority from his home in Caesarea. His many opinions and sayings are recorded throughout the Talmud Yerushalmi and Bavli. For instance, as we are about to enter the month of Elul, preparing for Rosh HaShanah. In Elul Ashkenazim will begin blowing the shofar every day after Shacharit. The Oral Law tradition for blowing shofar on Rosh HaShanah, the day of judgment, is that the essential sound of the day, the Teruah, a broken phrase of short sounds signifying alarm to awaken our conscience, is framed before and after with the long note of the Tekiyah. In Rabbi Abahu’s time a question arose about the correct sound of the Teruah – should it be three short but slightly extended notes we call Shevarim, or at least nine staccato notes we call Teruah? To resolve the problem, Rabbi Abahu instituted a composite:

Rabbi Abahu’s approach is still part of the pattern we use in blowing Shofar throughout Elul and on Rosh HaShanah, with the broken sounds of the shofar that call us to break open our hearts to work on fixing the places of brokenness within us.

Rabbi Abahu was also a profound ethical and spiritual thinker, renowned for his humility and sensitivity to others, attested by several accounts in the Gemara. He says:

Rabbi Abahu says: the world only endures for the sake of a person who makes themselves as if they are not, as it says “and below, the eternal arms of the world (Dt 33:27).

This is both an ethical and existential insight, the basis for the kabbalistic and hassidic contemplative practice of bittul ha-yesh – literally “nullification of existence” in the sense of effacement of self. When we efface self-centered interest, the full world emerges in reality. As Rabbi Barukh HaLevi Epstein explains on the basis of the Gemara Sotah 5a, in this deep place of humility we become personal partners with God, supporting the world (Torah Temimah, Deut 33:27). In this state of consciousness, we can have genuine personal relationship with all people, all beings, with HaShem. As we stood at the resting place of Rabbi Abahu, we felt this.

This is one of the principles underlying the resolute rejection of idolatry in this week’s parashah and throughout the Torah. If a false prophet arises to try to divert us to idolatrous practice or worship of some other deity, Moshe Rabbenu warn us to reject them:

Am Yisrael is privileged to have a direct, personal relationship with God. When we come to realize that God has not only created all of reality, but has created each of us and continues to sustain each of us personally in complete detail, every aspect of our physical and spiritual being at every moment with no effort on our part, that we are held in the eternal arms of God – the thoughtful response to this realization is to really love God with all our heart and all our soul. It’s completely personal. For this reason the Torah’s opposition to idolatry is so severe, making representation of God a capital crime. When we are called to have a most personal, direct, intimate relationship with God, actual God, to interfere with this relationship and deflect our attention to pretend images is an insult. It’s lese majeste, a capital crime.

This is what Rabbi Abahu teaches us with his deep humility, his refined sensitivity to others, his self-effacement: the world exists for this consciousness. And so with the father and his children standing with us at Rabbi Abahu’s inspiring resting place, we all thanked each other and blessed each other and marveled together on the ways in which HaShem guides us to these special personal connections. 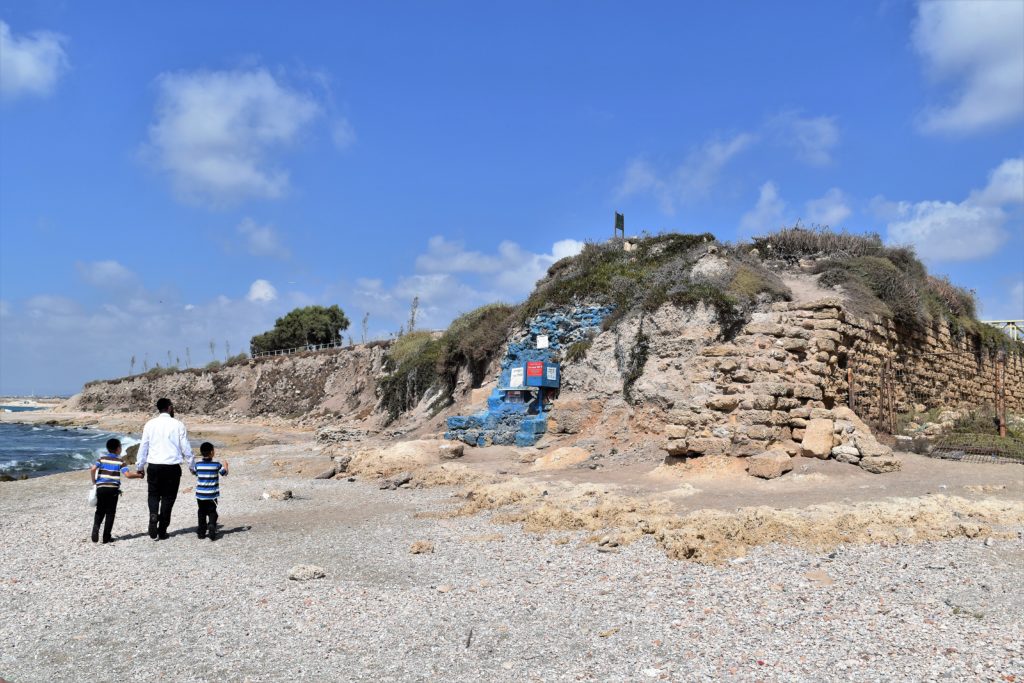 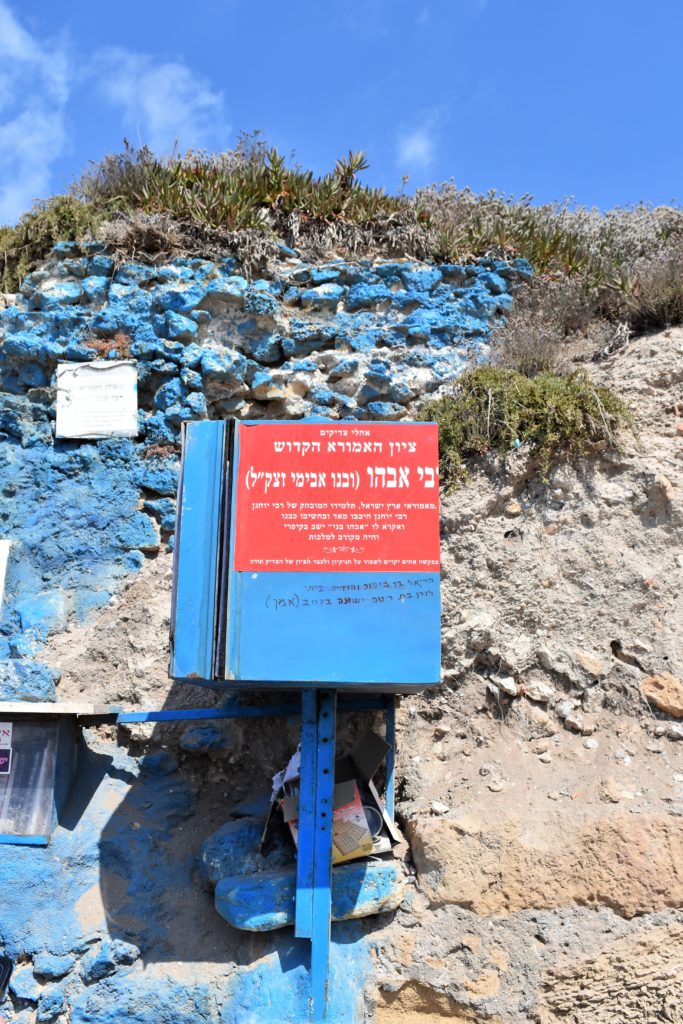 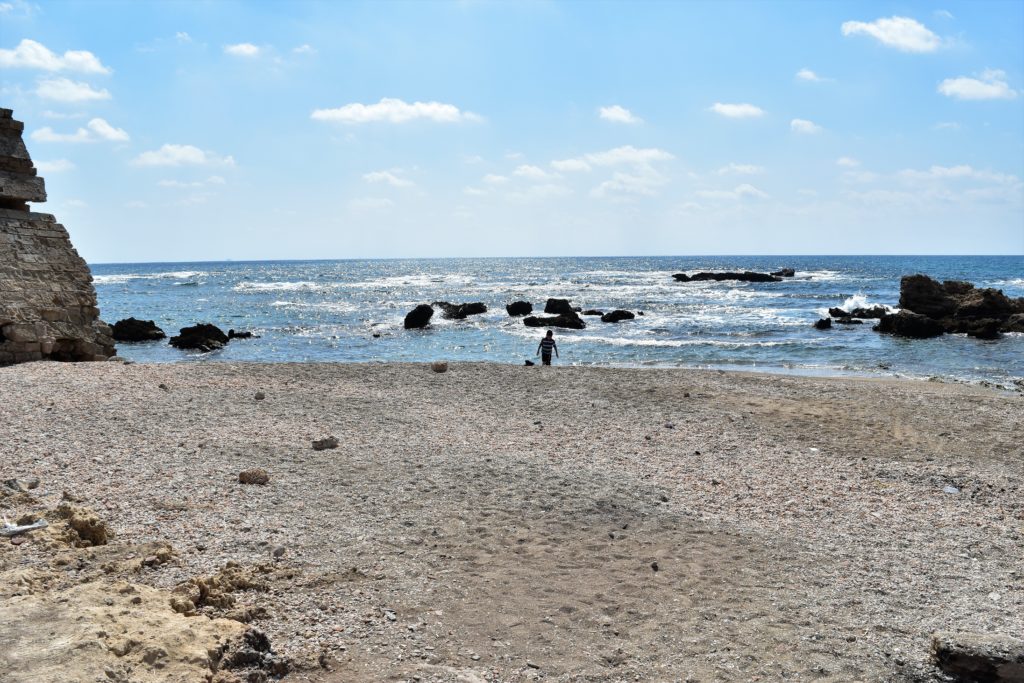 One thought on “Up Close and Personal”