This past Sunday we took advantage of the good weather to go hunting for the Gilboa Iris, a rare and beautiful flower that blossoms for about four weeks, from late February into March on Mount Barkan, a peak in the Gilboa range, a nature reserve on the eastern edge of the Lower Galil above the Jordan Valley. It has large, deep purple petals. We corresponded with a member of an Israeli flower club who had actually spotted a different variety in a section of the Gilboa Forest, and directed us to look along a path 200 meters from a parking entrance called “Sha’ar HaZahav – the Golden Gate.”

When we arrived late morning at the nature reserve, we stopped first at the “Gilboa Iris parking area.” That sounded promising. Over a hundred Israelis of all ages were already strolling along paths across dunams of open meadows searching for the flower and enjoying the beautiful day. The iris, like many wildflowers of Israel, is protected by law and Israelis are very respectful of this. The flowers are treated like precious gems. You don’t touch, you just enjoy their beauty.

One iris had been spotted, a little past its prime but pretty enough, and families were gathering around it and taking photos and selfies, and we did the same. Scanning the meadows with binoculars, I spotted another in a far corner of the field, so we hiked over the rocky terrain to reach it. When others saw us moving purposefully towards the remote area they followed, and we found a fresh iris. Later we found a third that was already pretty weather-beaten. The Iris was not the only beautiful wildflower in the fields. There were anemones, cyclamens, storks-bills, Barbary nuts, scarlet pimpernels and many others. We found some stunning orange tulips.

After several hours, we went back to the car and drove further, to the “Golden Gate” area. This was much quieter, just a few families having barbecues. We parked the car along the dirt road, had lunch and then began to search for the special iris. Problem was there were several roads and paths and we had no idea which 200 meters the flower club woman meant. So, we tried half a kilometer along one road, we tried half a kilometer along another path, no luck. Eventually we decided to give up, returned to the car and packed up to leave – three rare Gilboa Irises and many other flowers and interesting people was not an unreasonable tally for the day. Then, all of a sudden, we just happened to glance at a spot only a few meters from our car, down a little slope, and there was a stand of the freshest and most beautiful Gilboa Irises of all! We laughed and laughed. Now that’s a lesson. It reminded us of the several versions of the hassidic tale of the guy who has a dream that there’s buried treasure in a far-off place, goes to the place and hears two people talking that there is buried treasure far away in a certain yard that happens to be the guy’s own backyard.

This lesson also stands at the heart of the tragic incident at the center of this week’s parashah. Bnei Yisrael, fresh from the revelation of HaShem Himself giving the Torah on Mount Sinai, end up worshipping a golden calf.  What in the world were they thinking? The trigger for the sin was the forty days and nights Moshe Rabbenu spent on Mount Sinai receiving the complete Torah, towards the end of which the Israelites lost patience and became anxious:

And the people saw that Moshe was late in coming down from the mountain and the people thronged around Aharon and said to him “get up, make gods for us that will go before us, for this man Moshe who brought us up from the land of Egypt, we don’t know what happened to him.

The people who demanded an idol were looking for something or someone definite and tangible to replace Moshe and his guaranteed connection with God, to give them a feeling of certainty and security that they were going in the right direction. HaShem, the One and only true God, is hidden and communicates with us in subtle ways. To develop a sure sense of HaShem’s reality, and live with a lack of full clarity and until that sense develops, is the great spiritual challenge of Torah. Idolatry, worship of a concrete thing as a representative of the divine, is at root a desire for certainty. When Aharon produces the golden calf, its worshippers exclaim:

These are your gods, Israel, the ones who brought you up from the land of Egypt.

In the Gemara Sanhedrin, Rabbi Shimon bar Yochai notes the use of the plural in this outrageous statement, and comments:

Rabbi Shimon ben Yochai said:…what is taught by the phrase “the ones who brought you up?” That they lusted for many gods.

Rabbi Shmuel Edels explains that Rabbi Shimon notes that the Israelites who wanted the golden calf referred to it in the plural. This indicates that they acknowledged HaShem, but thought of Him only as the head of a pantheon of lesser deities to whom He delegated running the world, deities who could be represented in concrete, tangible idols. HaShem Himself, they thought, was no longer involved in guiding the world. This was not an academic theological issue for the worshippers of the calf. They “lusted” for the certainty that they thought tangible idols would provide, to replace a distant, hidden God and an absent Moshe.

In a similar vein, later in the Gemara (Sanhedrin 102b), Rav Ashi speaks disrespectfully of three of the wicked kings of Israel who worshipped idolatry. That night one of those kings, Menasheh, comes to him in a dream and upbraids him for his lack of respect, and demonstrates that he is more halakhically knowledgeable than Rav Ashi. So Rav Ashi asks him “since you are so wise, what’s the reason you worshipped idolatry?” The king said to him “If you had been there, you would have lifted up the hems of your cloak so you could run after me.” That is, the desire for the illusion of certainty that idolatry provides is a powerful desire and you, too, would have succumbed to it.

Rebbe Menachem Mendel of Kotsk notes that the idolatrous lust for certainty is a persistent threat, even in the context of Torah and mitzvot. His hassidim were discussing the verse “take heed to yourselves lest you forget the covenant of HaShem your God which He has made with you, and you make for yourselves an idol in the likeness of any thing which HaShem your God has commanded you (Dt. 4:23).” The Hassidim were perplexed – it should have said “… which HaShem your God has forbidden you.” The Rebbe had been listening to the discussion, and at this point joined in: “the Torah is warning us not to make an idol of any thing God has commanded us.” It’s for this reason that Moshe broke the two Tablets of the Law when he found the people worshipping the golden calf. Rabbi Meir Simcha HaKohen of Dvinsk explains that in their state of mind the people would have turned the Tablets of the Law themselves into an idol (Meshekh Hokhmah, Ex. 32:19).

The worshippers of the golden calf sought to cling to things and people and words in their lust for certainty. Things are finite, people are fallible, words are limited. When we look to things, people and words for certainty in life, we’re reaching for what is apart from us, pushing away truth and missing the reality that is closest to us. When we think in con-cepts, we try to grasp little bits of the world around us, but in the process we push away the very phenomena we’re trying to understand. Like when we reach to grab an object in hand, we still hold it at arm’s length. Concepts are static, like still photographs, and detached from the real, while reality is dynamic and constantly evolving and we’re part of it. Especially when it comes to our search for God, if we use ideas and concepts to try to pin God down, we end up in mental idolatry (Rabbi Yehudah ben Barzilai al-Barceloni, Commentary on Sefer Yezirah, 14). Any idea that we have of God the Infinite –  the one thing we can be sure of is that it’s not God. If we quiet our thoughts, expand our consciousness and open our hearts honestly to the reality in which we find ourselves, we discover that God is closer to us than we are to ourselves: “Close is HaShem to all who call Him, all who call him in truth (Ps. 145:18).”

Letting go of the search for a certain flower 200 meters away, we found the beautiful flowers that were right in front of us all along. 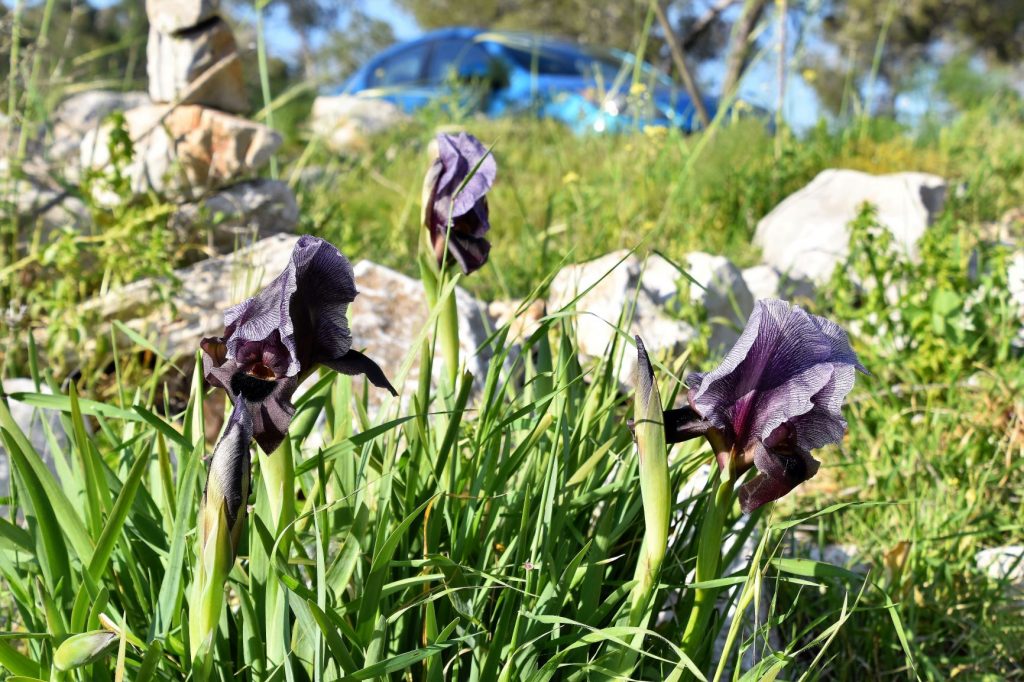