Rights – territorial rights, political rights, personal rights – are often cited as the bone of contention between Israelis and Palestinians. Framed in this way, it seems like an all or nothing struggle. This week’s parashah, centered on the sibling rivalry between Yaakov and Esav, also seems to play out in terms of competing rights. But a deeper reading may guide us to another perspective.

Early in the parashah, Yaakov maneuvers Esav out of the right of the firstborn. Later, at his mother Rivka’s instigation, Yaakov maneuvers Esav out of a blessing for success from their father Yitzhak. Esav complains about both and demands rights to which he believes he is entitled: “he usurped me twice – my firstborn birthright he took, and now he took my blessing (Gen. 27:36).” But was it rights that Yaakov was seeking, and was it a right that Yitzhak sought to confer upon his son, whichever son?

In the midst of the high-tension episode in which Yaakov impersonates Esav to get their blind father’s blessing there’s a curiously quiet, sweet moment. Yitzhak asks his son, whoever he is, to come close and kiss him. He does, and Yitzhak smells the fragrance of Yaakov’s clothing and declares:

But there is no worse smell than washed goatskins! Rather, this teaches that the fragrance of the Garden of Eden entered with him. “Like a field that HaShem has blessed” – that gave him a good fragrance. This is a field of apple trees, and so the Rabbis interpret.

There may be worse smells than goatskins, but we get Rashi’s point. The idea that the perfume of the Garden of Eden entered with Yaakov comes from the midrashic tradition (Tanhuma, Bereshit Rabbah, loc.cit; Shir haShirim Rabbah 4:11). The idea that it was the fragrance of apple trees is the opinion of Rav Yehudah son of Rav Shmuel bar Shilat in the name of Rav in the Gemara Ta’anit (29b). Tosafot suggests that תפוח actually refers not an apple but to the Etrog tree that is indigenous to the Middle East —  תפוח can be a generic term for a plump fruit. In the rabbinic and kabbalistic tradition the tree at the center of the Garden of Eden was the Etrog, and it does have a beautiful fragrance. As such, the Gemara and the midrashim are all saying that it was the fragrance of the Garden of Eden that Yitzhak smelled when Yaakov entered. But what does the odor of Eden have to do with this moment, and why does Yitzhak declare this?

Rabbi Yaakov Leiner (Beit Yaakov, Toldot, 41) quotes his father, Rabbi Mordechai Leiner, who presses the question further: to whom was the blind Yitzhak talking, asking him to “See!” and referring to his son in third person? Yaakov was the only other person in the room. He answers: Yitzhak was making this declaration to God. When Rivka told Yaakov that his father was preparing to bless Esav, she paraphrases him presciently as saying “I will bless you before HaShem.” Putting this all together, the point is that when Yaakov enters, even though the blind Yitzhak is not sure which son is standing before him, the odor of Eden confirms for him that this son is worthy of the blessing he is about to give. This son will bring humanity back to the original Eden existence, to the original mission of humanity “to serve and to protect (Gen. 2:15),” to the mission of responsibility. Not rights. Responsibilities.

Rabbi Yaakov Leiner takes this deeper. What is the basis of our responsibility? He proves from the Zohar that the essential spiritual quality of Yitzhak is to recognize that absolutely everything in the world, all of reality, is a gift of God, and that he, himself, is a gift to himself from God. Further: even the ability to recognize that everything comes from God is an awareness that comes from God, through and through. This is why Yitzhak, when he smells the fragrance of his son, declares it to God – he is always talking to God, he encounters God everywhere he turns. He realizes that we do not own the world. We do not own any thing or any territory or place in the world. We don’t even own ourselves. That we have been constituted to be who we are by God, and are held in place at every moment, in our identities, by God, means that we belong to God and are responsible to God. This is the basis of our responsibility, to use the gifts we have been given, ourselves in the world, “to serve and to protect,” to care for all beings.

This awareness is sometimes termed “self-nullification (bittul ha-yesh),” but that’s not accurate, worse, it’s misleading. When truly appreciated through and through, that there is no place left in the world or in ourselves to own or from which to own, this awareness becomes a profound and blissful affirmation, and absolute “yes!” that grants existence a buoyancy by which we embrace everything we experience with a joyful gratefulness to care for and protect such precious God-given gifts. Thanksgiving all the time!

In this awareness Yitzhak blesses Yaakov, who will carry it forward into this complex world. This awareness is at the heart of Torah, at the heart of all halakhah, which is designed to sensitize us and alert us to our responsibilities to care for the world. This awareness gets obscured by the struggles of life, in which defensiveness devolves into a competition for rights rather than a sharing of responsibilities. But it is this awareness that may help us move through this dark period to a truly enlightened vision of mutual support and care for all human beings, all beings, to serve and to protect each other in a world that still, underneath it all, can be a Garden of Eden that embraces us all.

The view from our house towards Mt. Hermon 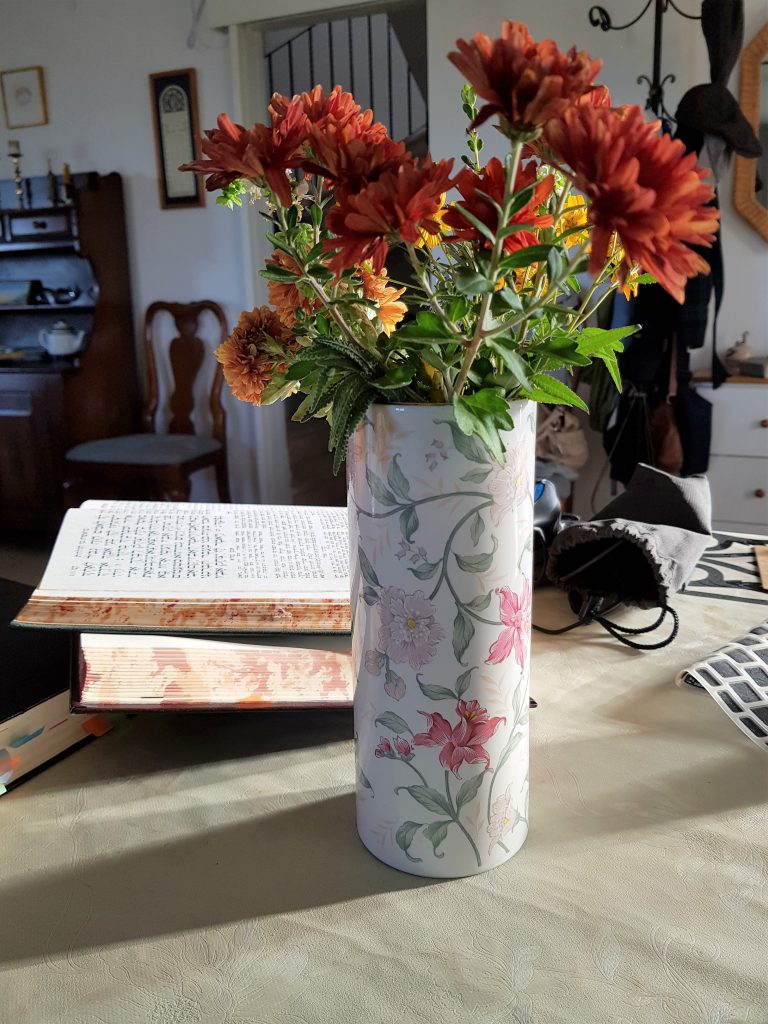