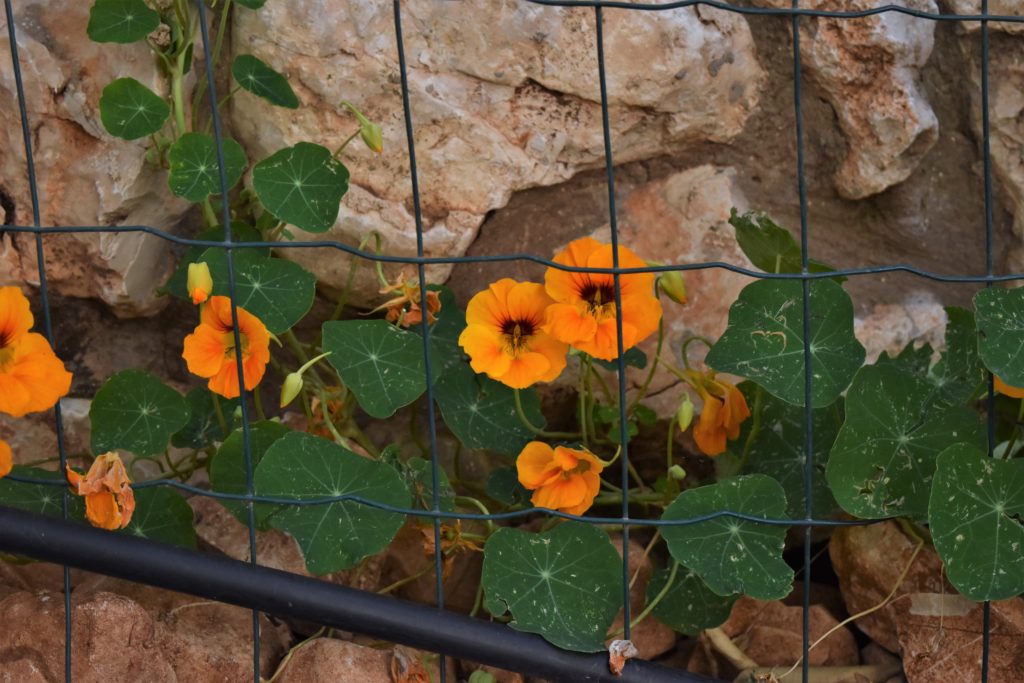 This is our first spring tending the garden we started last fall, and it’s in bloom now, with figs and lemons ripening, the summer vegetables getting started, bees humming in the flowers, ladybugs beginning to appear, wasps and spiders and butterflies and grasshoppers of all kinds – all signs of an ecosystem reviving and rebalancing itself after years of neglect. The garden borders a meadow and pasture for cows and horses so it also benefits from the resources of a larger natural network.

The interdependencies of ecosystems and social systems is the theme of this week’s parashah, that focuses on the mitzvot of Shmittah and Yovel. During the Shmittah year, every Shevi’it or seventh year of the cycle, agricultural work is suspended, except for minimal support necessary to help trees survive.  The land lies fallow to be naturally refreshed. When properly organized by the Beit Din, the produce that continues to grow on its own through the year is not sold for profit by private owners, but is collected by agents of the court and distributed equitably among poor and well-off alike. The Rabbanut and the farmers of Israel have not yet achieved this level of cooperation and organization on a national scale, only in limited locales. At the end of the Shmittah year outstanding loans are released, providing some financial relief for the poor. Ideally, according to Rav Kook, a real Shmittah year following Torah and rabbinic law would be an Gan Eden-like existence.

During the Yovel year, the fiftieth year after seven Shmittah cycles, in addition to the suspension of agricultural work, slaves were released and land that was sold since the last Yovel returns to its patrimonial owners, based on the original distribution of land among the tribes and families of Israel during the conquest under Yehoshua. The observance of Yovel, which depends on the whole nation of Israel living in the Land of Israel, ceased with exile of the northern tribes at the fall of the First Temple and has not yet been reinstituted (see Maimonides, Mishneh Torah, Shimittah ve-Yovel, 10:4-8).

The Mishnah Avot discusses the connection between the observance of Shmittah, Yovel and the mitzvot of agricultural tithes and the political, economic and medical health of Israel:

Mishnah 8: …If some people tithe and some don’t, famine comes, during which some are starving and some are satiated. If everyone decides not to give tithes, a famine from dearth and political unrest comes… Pestilence comes to the world… on account of [trade for profit in the produce of ]Shevi’it.

Many commentators suggest that the calamities that ensue from not keeping the mitzvot of Shmittah, Yovel and tithes for the poor are divine punishments measure for measure. Maimonides, however, in his discussion of the rationales of the mitzvot in his Guide of the Perplexed, provides the basis for an integral causal explanation. He notes that the mitzvot of Shmittah and Yovel have a number of benefits for society and for the natural order:

With regard to all the commandments we have enumerated in Laws concerning the Sabbatical Year and the Jubilee, some of them are meant to lead to compassion and help for all men – as the text has it: “That the poor of your people may eat; and what they leave the beasts of the field shall eat… (Ex. 23:11),” and are meant to make the earth more fertile and stronger through letting it lie fallow. Others are meant to lead to benevolence towards slaves and poor people – I refer to remission of debts and freeing of slaves. Others consider what is useful from a permanent point of view in providing for a living, through turning the whole land into an inalienable possession that cannot be sold in absolute fashion: “and the Land shall not be sold in perpetuity (Lev. 25:23).” Consequently a man’s property remains, as far as landed property itself is concerned, reserved for him and his children and he can only exploit its produce. (3:39).

According to Maimonides there is profound divine wisdom in the mitzvot of Shmittah and Yovel and the entire system of tithes. Their fulfillment is good for the land and good for agriculture and promotes a robust economy and compassionate society that assures that the poor and the disadvantaged are cared for. Conversely, when these mitzvot are not fulfilled, the fertility of the land is weakened, harvests are less abundant, the poor are not cared for, starvation, pestilence and political unrest result, the social fabric of Israel is weakened, we become vulnerable to our enemies, and conquest and exile can be, and has been, the result. These calamities are not punitive in an extrinsic sense, they are consequences integral to the entire divinely ordained system. Rabbi Soloveitchik z”l used to emphasize to us that talmudic analysis prefers integral explanations (minei u-vei).

There is ample evidence these days of the connection between dysfunctional societies and blighted ecosystems in many of the nations of the Middle East. Syria, due to cruel despotic leadership, is in ruins and much of its population in exile as refugees. Gaza, rather than building a functional state, destroys itself in hatred for Israel. Iran and its proxies, spending more on weapons and instigating violence in the region than caring for their own people, are facing restive populations and a day of reckoning. The Torah, as relevant today as when it was first revealed, comes to guide humanity towards a wholesome and disciplined way of life that cultivates a compassionate and responsible society in a healthy Land.

Just a note on the issue of responsible care for each other and for the Land. Today is Lag BaOmer, a joyful spiritual day in the otherwise relatively somber Omer period. In the kabbalistic interpretation of the day it is dedicated to the divinely revealed quality of spiritual discipline, discipline of discipline, which was also an essential quality of Rabbi Shimon bar Yochai, whose yahrzeit is celebrated on this day. One of the customs of the day is the lighting of bonfires, which in principle might have some symbolic value. But the way this custom is practiced here has become irresponsible and not at all spiritual. Children collect all kinds of combustibles for weeks before, some containing toxic materials. The fires are often lit in unsafe places near homes or fields of dry grasses and trees, and without adequate supervision and safety measures. And particularly this year, in which the weather in parts of the country has been hot, dry and extremely windy, these bonfires are highly dangerous. Add to it that the Gazans, ever resourceful for inventing methods of arson and destruction, have been using kites to fly incendiary materials into Israel to start brush fires. Israeli authorities have issued cautions against lighting bonfires on Lag BaOmer, but they have been mostly ignored, just as this little rant of mine will be. But I feel it needs to be said.

In our parashah, HaShem states the principle underlying the mitzvot of Shmittah and Yovel and their connection to the Land of Israel:

The Land shall not be sold absolutely, for the Land is Mine, for you are sojourners and dwellers with Me.

The laws of Shmittah and Yovel convey the message that we do not control the Land of Israel. We are collective custodians of the Land, not owners. Our dwelling in the Land is with HaShem’s consent and conditional on our just and compassionate and responsible behavior.  Levinas sums up the relationship of the People of Israel to the Land of Israel:

Already, they are potentially exiled… Only those who are always ready to accept the consequences of their actions and accept exile when they are no longer worthy of a homeland have the right to enter this homeland… There is no other country like it; the resolution to accept a country under such conditions confer a right to that country (Nine Talmudic Readings, 68-69).

So the garden we are lovingly tending, that is coming to life so wonderfully, is not really ours. It is the Land of Israel and belongs to HaShem. And we, like Israelis all over this country, are deeply grateful for the privilege of caring for it.

A fig in potential