This week we celebrated the birthdays of two of our grandchildren and son with an intercontinental family video gathering at the Bagel & Locks Israel Quest. This is an interactive Israeli website featuring  virtual journeys around the Land of Israel. You move from place to place by discovering hidden clues and solving a unique puzzle at each location, which permits you to move to the next place. The puzzles deal with the history and culture of Israel and instill a love of Israel, so it’s educational and inspirational as well as fun. We recommend this website highly. We all worked together as a family, grandchildren, children, grandparents, each person contributing their skills. It was a great way to get together during these unusual times. And solving puzzles with hidden clues is a valuable skill to work on, not just for games, but for life itself.

In our online meditation sessions lately we have been working on direct conscious questioning – existential questioning not with words but with the pure, flexible openness of consciousness itself. It’s the very essence of the question: beginning with the given gift of reality and expanding awareness to probe its context, its hidden, mysterious background, to ask directly, without words, “Who created these (Isaiah 40:26)?”

But in this week’s parashah we find that we are not the only ones doing the asking. Moshe Rabbenu says:

Rabbi Yehudah Aryeh Leib Alter in Sefat Emet comments that though this verse lists several qualities that God asks of us, the series begins with fear of God. He explains that fear of God is not anxiety or fright, rather, it’s a conscious state of high vigilance: “through this fear a person can feel the illumination from HaShem that is in every thing.” He cites the Gemara Shabbat (31a-b):

Rabbah bar Rav Huna said: any person who has Torah but does not have fear of Heaven resembles a treasurer to whom was given the inner keys, but the outer keys they did not give him.

The Sefat Emet explains that fear of God is the key to the outer gates of reality, “and by fear the outer gates are opened and the innerness is revealed (5632).” Fear of God is the essence of the question.  It’s the vigilance of consciousness to probe behind the veil of phenomenal reality to the wonder and amazement of it all, to ask Who is behind it all?  It’s the vigilance of conscience to ask at every moment “what is God asking of me in this situation?”

This world is a puzzle, and these days it’s more puzzling than ever, on so many levels. The health, economic, social, political and military crises in which we are all enmeshed are moving us to question the status quo in multiple dimensions: assumptions, values, facts, practices we have taken for granted for years, for generations, are being thrown into question. We find ourselves on such unstable, unfamiliar and dangerous ground. The key resource we have is that we are all in this together – every person on this planet, and this may be the whole point. This wild puzzle needs every single one of us working together as a team, working together as the family we are, to solve it. Every single person has unique skills to give to this team effort. Everyone’s contribution matters, everyone’s life matters. And maybe, if we succeed in solving some of these issues for the highest good of humanity, we might find, as our family did this week, that the most precious result is not just solving puzzles, but just the joy of being together, which is what God has been asking of us all along. 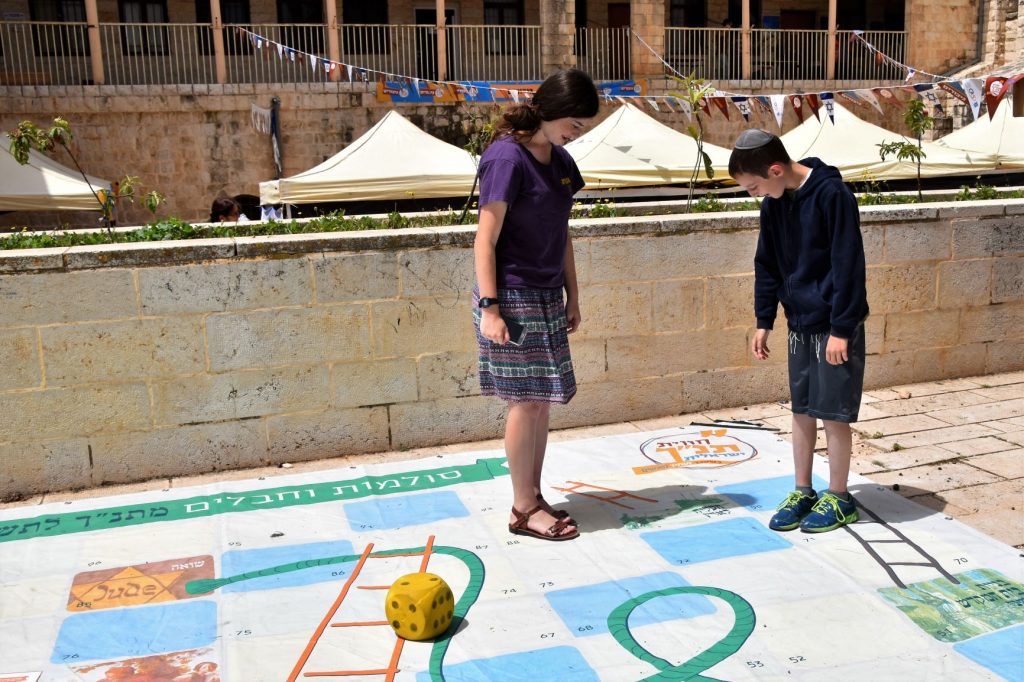 Chol HaMoed Pesach, April 2019, when we could physically get together to play a game. A million years ago