We’ve admired Koolulam for some time now. It’s a group of talented musicians who arrange ad hoc choral singing experiences on a vast scale for anyone who wants to join, in cities and towns all around Israel.  A thousand and more people come together in a large venue, get organized into sopranos, altos and baritones, learn their harmonizing parts to a popular, spiritually uplifting song and then sing it together in powerful performance, all in two hours. What’s most inspiring about Koolulam is the way they bring together people from all parts of Israeli society – secular and religious Jews, Christians and Muslims all united in song. The founders say they themselves were inspired by witnessing thousands of Jews singing together at the Kotel on Yom Kippur and thought how wonderful it would be to bring this unifying experience to all Israelis.

So when we heard that Koolulam was coming to Bet She’an, which is a reasonable distance from Tzfat, we signed up right away (the tickets sell out quickly) and went the other day with our eldest granddaughter. We went to a late afternoon performance rather than the one in the evening, so it was packed with families – an exuberant crowd of around one thousand five hundred parents and children in a large theater. I was assigned to the baritones and was really impressed with the way our music director and his pianist got our rambunctious group to learn our part in such a short time. He began by saying: “the beginning of music is silence and listening.” Rebbe Nachman of Breslov says this about song in Likkutei Mohara”n (1:64). The director then asked us to turn to the people next to us and “introduce yourselves.” I happened to be standing next to two brothers, probably about seven and five, who were tussling and whacking away at each other, but the moment the music director said “introduce yourselves” the older one stopped, turned to me, put out his hand politely and said “Shalom, ani Amir.” Musick hath charms to soothe the savage brats. We learned to listen carefully to each other and not just belt out the song but sing it artfully together, feeling how the music propels the words. Then all the groups joined together in the enormous theater and the conductor, Ben Yefet, a man of boundless energy and a soul of pure music, brought all the voices together in a tightly, elegantly interwoven three-part harmony in several takes, each more musically expressive, until we got one that was a wrap. It really is a marvel the way an enormous group of former strangers can come together and quickly attune to each other so tightly and create something beautiful together. At the end, the whole one thousand five hundred men, women, and children erupted in a thunderous cheer.

We sang “Or Gadol” – Great Light, a popular Israeli song by Amir Dadon. Its melody and rhythms have beauty and its words have a compelling message, putting spiritual themes into general terms that can speak to people of all persuasions. It’s tighter and more rhythmic in the Hebrew, with a loose rhyme scheme that’s natural, not forced, that can’t be matched in English translation, but a rough, abbreviated translation goes:

If I’ve had some sorrow, maybe I’ve learned from it something vital

For in the end, when it’s over, there’s a reason for everything.

Alone in the midst of all the madness I think how time can fly.

But in the end, there’s a reason for everything…

A great light enlightens all,

More than this you don’t need to ask,

I’ve come to learn from what’s good and to live,

To begin it all from the beginning,

You can hear and see a Koolulam performance of this song on YouTube, sung at Schneider Children’s Hospital by young patients, their families and the staff, that’s deeply moving. These are people living the song they sing.

This is also a pretty good message for this month of Elul we have just started – a time to take stock of where we are in our lives, learn the lessons we need to learn from our mistakes, and start again. What underlies the possibility of doing real and effective Teshuvah is the Great Light that enlightens all, the life that continually enlivens all, light of the Infinite, that HaShem is constantly refreshing and renewing, so every moment can be like breathing for the first time. We are immersed in this light, buoyed in this life, all of us together, the whole world. It’s just for us to receive it, let go of the negative, embrace the changes we are empowered to make and not waste it.

The kabbalists draw a metaphor for this from our parashah, on the prohibition against cutting down fruits trees during warfare while besieging a city unless absolutely necessary and non-fruit bearing trees are not available (Baba Kama 91b).  The Torah phrases the rationale as a rhetorical question:

When you besiege a city for many days, to wage war against it to conquer it, do not destroy its trees, chopping with an axe; for you can eat from them and you should not cut them, for is a tree of the field a man that you should come against it in siege?

The point of the rhetorical question, as the commentators make clear, is that a tree is not your enemy, and in fact it can benefit you as a source of food (Ibn Ezra et al.). But the kabbalists note that the phrasing of the question is syntactically backwards for a comparison, reading literally “for a man is a tree of the field…?” Kind of like a Yiddish question.  So they playfully take it hyperliterally and flip the rhetorical question into a declarative statement and take it out of context to express a basic insight into human existence: “for man is a tree of the field.” As Rabbi Hayyim Vital says:

There is a single light in the form of man that extends through all four worlds – emanation, creation, formation, action – unto the end of the four elements of the lower world… And all souls of the lower world are comprised in it, and with their descent into this world to enclothe in bodies they leave their roots inhering in their source from which they are hewn, and only the branches descend by extension and get clothed in bodies in this world, like the image of the branches of a tree that inhere in the roots of the actual tree and bend themselves below, touching the ground while they are still attached to the trunk of the tree (Sha’arei Kedushah 3:5).

Rabbi Hayyim Vital goes on to explain that the “single light in the form of man” is the Light of the Infinite, divine Consciousness, so to speak, that extends through all worlds, all reality. Human consciousness itself is rooted in this Light of the Infinite, a holographic extension of this Light. Each of us is like a branch of a cosmic tree of light, divine Consciousness connecting everything. By virtue of this, we are all connected in consciousness to each other. We can recognize consciousness in each other, we can experience moments of a kind of empathic and even telepathic communication. Even in everyday conversation we rely on this connectedness to talk together and pretend we understand each other. “A great light enlightens all.”

And this is a key theme in the thought of Rav Avraham Yitzhak Kook, z”l, whose yahrzeit was this week. In his major work Orot haKodesh he says:

Observe the light of the divine Presence in all existence. Observe the delight of the heavenly life, how it pervades every nook and cranny of life: spirituality and materiality, before your eyes of flesh and before your eyes of spirit. Contemplate the wonders of Creation, the divine life within them, not as a dim conceptual content presented at a distance, but known as the reality in which you live. Know yourself, your world, know the thoughts of your heart, and of every thinker. Find the source of life that is within you and beyond you and around you, the glorious splendor of life in which you dwell… Precious and holy to us are the garments of the forms, and necessary for us and for all finite beings in their spiritual vision of unity. But always, whenever we come to knowledgeable life, it is forbidden to depart from the supernal point: that light penetrates from the non-comprehensible to the comprehensible, by process of emanation, from the Light of the Infinite (1:64).

Rav Kook, zikhrono livrakhah, expresses a grand vision of the unity of all existence, of all of us together, in the revelation of divine consciousness that flows from God the Infinite. He goes on to encourage us “to delight together in these heavenly delights, in all kinds of awarenesses, that are comprised in this great totality, from which all life comes forth.”

And delight we did, in the camaraderie of a thousand and more people of good heart and good spirit, singing joyfully together and feeling how deeply and amazingly we are connected to each other, to all humanity, to HaShem. It’s a taste of the goal towards which Torah is bringing us, that we are working hard at during this month of Elul and at all times, the vision of humanity we celebrate on Rosh HaShanah, that “all created beings… become a single bond to do Your Will with a full heart.” Speedily and in our days. 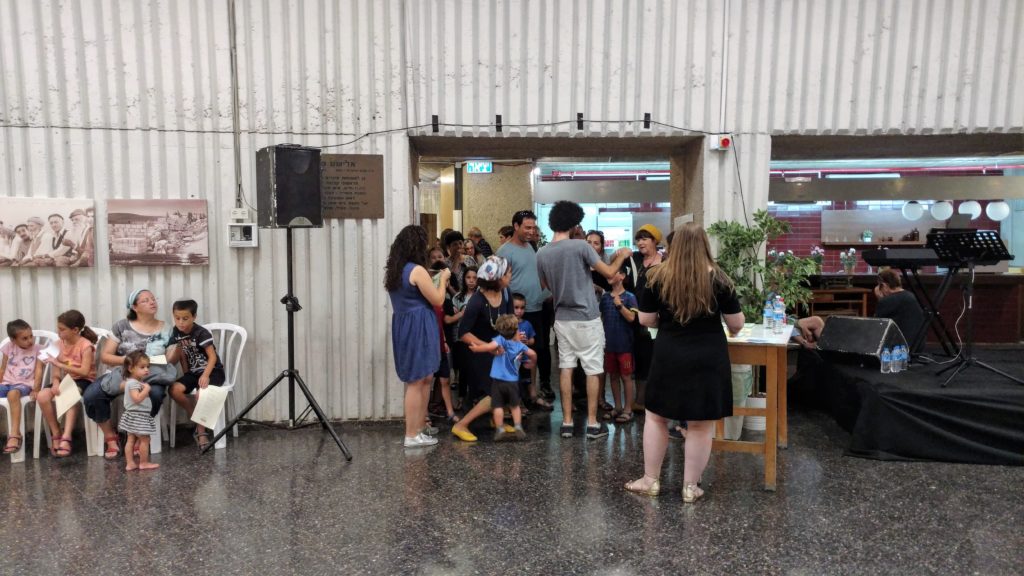 Giving out parts as we arrive in the hall. It’s all how you say hello 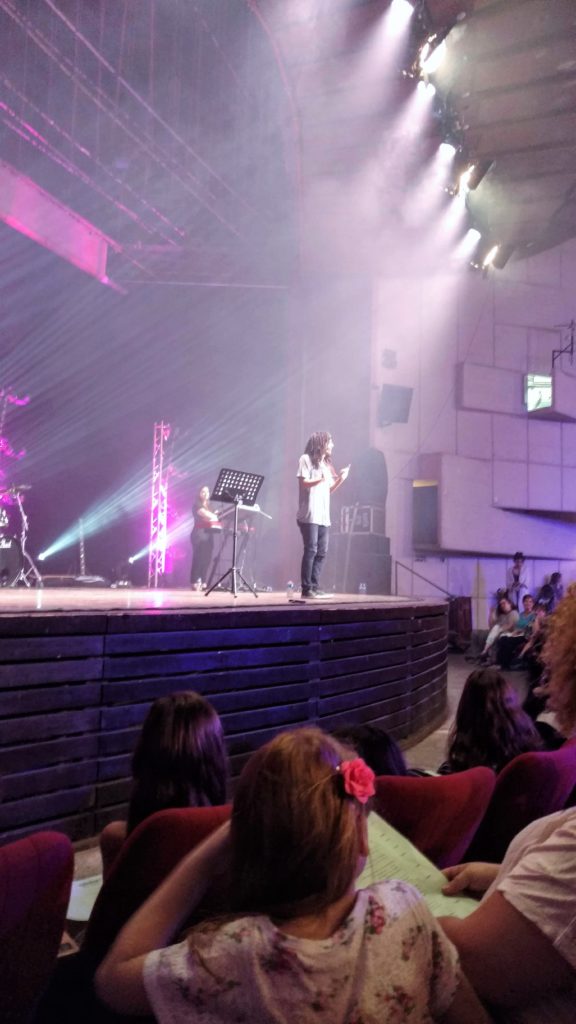 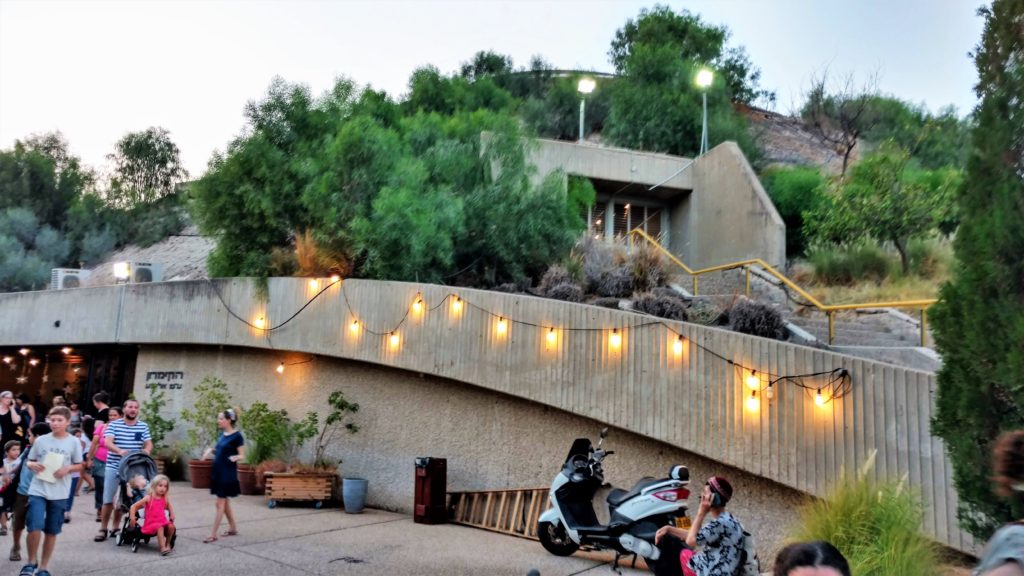 Leaving the theatre built into the side of a mountain

2 thoughts on “The Great Light”