Stand Up and Be Counted

We participated this week in our first elections in Israel, a municipal election for mayor and the city council, and it was a moving experience to be part of the democratic process here and contribute our votes. It also had its comic side. The whole thing came right out of the voting scene in the movie Sallah Shabati, the classic Israeli comedy starring Topol about the immigrant Aliyah experience. That movie came out in 1964 and things haven’t changed much. There’s the same raucous electioneering circus right up to the entrance of the polling station. There’s the guy who guides us to the entrance door and puts his arm on my shoulder and tells me, in a stage whisper plus conspiratorial wink, who I should vote for – just like in the movie. The same simple voting booths, the same simple paper ballots and envelopes, the same simple ballot box in the middle of the room, festooned with some wrapping paper.

This voting experience also has its very serious side.

It comes after the horrific shooting at the Tree of Life Synagogue in Pittsburgh that killed eleven men and women and wounded six others. These men and women, kedoshim – holy souls, were murdered because they were Jews. The killer is a rabid anti-Semite, and anti-Jewish animus is coming out of the woodwork in the U.S. and in Europe, from the right and the left of the Western political spectrum and from the political and religious corruption going on in parts of the Islamic world. The coarsening of political discourse in the U.S. has aggravated the situation, but the roots go much deeper.

This week’s parashah introduces the first anti-Semite: Lavan. Actually, the term, when used to denote hatred of Jews, isn’t accurate. Lavan was a Semite himself, from Avraham’s own family lineage, as are a large portion of those who hate Jews and Israel today. What distinguishes Lavan and his ilk is the motive for his hatred, as described by Rabbi Yehudah Loew ben Bezalel, the Mahara”l of Prague. He’s commenting on the provocative interpretation of the Viduy Bikurim, the confession of thanks for the first fruits of the harvest, that appears in the Pesach Haggadah:

Come and learn what Lavan the Aramean sought to do to Yaakov our father. For Paro only decreed against the male children, but Lavan sought to uproot all, as it says: an Aramean destroyed my father.

It’s a wild interpretation. The Hebrew phrase that introduces the confession of thanksgiving just means “An Aramean wanderer was my father” – meaning that Avraham, who came from Aram, or Yaakov, his grandson, was a nomad. But the Haggadah puns on the word oveid which can also mean “destroy” as well as “wander,” and twists the verse to read “an Aramean destroyed my father.” The Haggadah here has an agenda, to point out that the Egyptians were not the first enemies of Israel, nor the last: “in each and every generation they rise up against us to destroy us, and the Holy One, blessed be He, saves us from their hand.” The Mahara”l asks how the Rabbis could focus on Lavan’s machinations against Yaakov, yet skip over Esav, who wanted to kill Yaakov? And Paro actually killed Israelites and at the splitting of the Sea it seems his intent was total annihilation. Yet the Haggadah singles out Lavan, whose intentions are not even clearly spelled out in the Torah. The Mahara”l answers:

Know, that this passage reveals a lot. For Israel has opponents unlike others who attack for a reason. Rather, they have opponents and enemies who have no reason. It only happens to Israel that there are certain nations that hate them though Israel has done nothing against them, yet still they oppose them.

The Mahara”l goes on to explain that while Esav had a reason for hating Yaakov, who he accused of usurping his birthright and blessings, and Paro’s reason was to keep the Israelites as a subjugated slave workforce, Lavan’s hatred of Yaakov had no reasonable basis. Yaakov was his sister’s son and his son-in-law, he was family. Yet Lavan does everything he can to oppose Yaakov and thwart him at every turn. And this baseless opposition begins to show itself in this week’s parashah, when Lavan suggests that Rivkah not accompany the faithful servant Eliezer back to meet Yitzhak her intended right away, but stay home for a year or so. The commentators note that his goal is to surreptitiously prevent the marriage between Rivkah and Yitzhak from happening at all. No reason is given for Lavan’s effort to uproot everything right from the start.

The Zohar notes that Lavan doesn’t use outright violence. His line of attack here and against Yaakov is through words and manipulation of narratives. Yet this can be just as destructive and deadly, inciting others to attack. And this explains something in the parashah that perplexes Rabbi Acha in Midrash Rabbah, quoted by Rashi: why the Torah brings word-for-word Eliezer’s detailed re-telling to Rivka’s family of the story of meeting Rivkah at the well, after we have just been told the events in the Torah in detail as they happened. Rashi quotes:

Rabbi Acha says: the conversations of the servants of the Patriarchs are preferred by God more than the Torah of the children, for behold, the passage about Eliezer is doubled in the Torah, yet there are many essential elements of Torah that are only conveyed in hints (Gen 24:42).

Rabbi Acha marvels at this but accepts it – that’s just what God likes. But the Torah is also telling us something important in repeating the story almost word for word: know your narrative and speak it. You will be challenged by the Lavans of the world, and the Amaleks, and others who oppose you with or without reason. They will try to twist the truth and manipulate narratives to disenfranchise and delegitimize you. We see this today in our struggles with Palestinian leaders, with Iran and Hezballah, in international forums and on college campuses of the U.S. and Europe, in hypocritical boycott movements and in social media worldwide. So know your narrative well, know the facts and speak the truth, and don’t let the Lavans of the world throw you off.

It’s the compelling truth of Eliezer’s narrative that Rivkah appreciates, and when Lavan tries to suggest that she stay home for a year or more, Eliezer says “call the young woman and let’s ask her to say for herself” – let her vote.  And she votes “I will go. (Gen. 24:58-59).” Empowered, she votes for Yitzhak, yes, and for joining him to help forge the great destiny of Am Yisrael.

The groundless hatred that led to the murder of eleven precious Jewish men and women attending the Tree of Life Synagogue, whose memories are a blessing, the hatred and violence we experience “in each and every generation,” remains a tragic mystery. We’ll have to leave it to psychologists and sociologists to figure out. But we need to stand up against it in each and every generation, knowing the truth of who we are as Jews, as the nation of Israel, remembering the humane and spiritually exalted vision of humanity we all stand for, remembering those who have given their lives for this vision, even if it is not yet appreciated by some of humanity. And every positive word and action we contribute, even voting in a charmingly low-tech local election, helps bring the vision closer to realization. We are voting for candidates, yes, but even more essentially, by participating in the only true and empowering democracy in this part of the world, we are voting to be a part of the high destiny of Israel and all humanity. 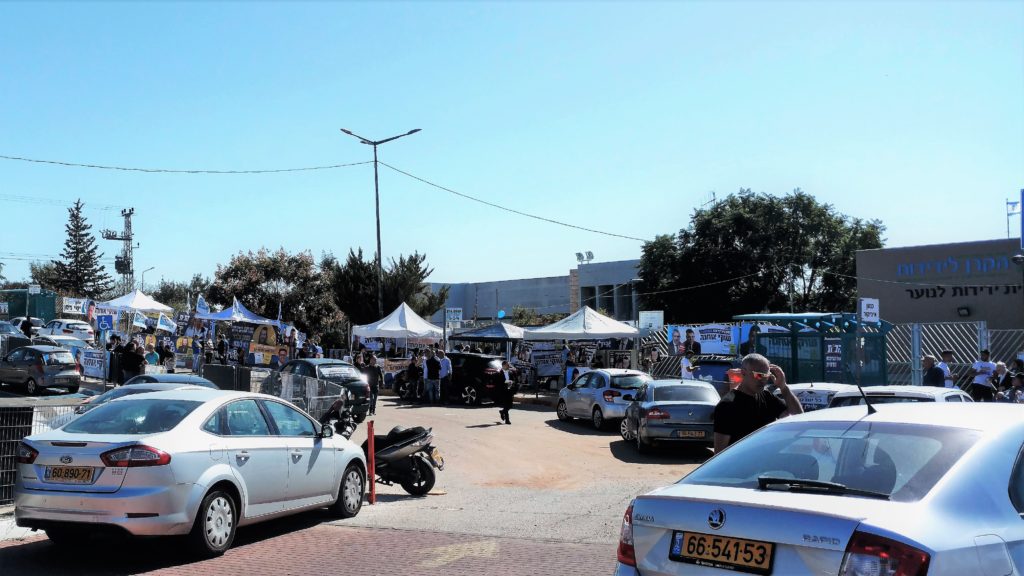