The yahrzeit of Rabbi Yitzhak Luria, the Ari z”l, is the 5th of Menachem Av, and people gathered this week from all over Israel to visit his gravesite in the holy cemetery of Tzfat situated just below the town, down along the western slope of the mountain. From nightfall and on throughout the night and day, the area around his grave is packed. Years ago a platform was built to accommodate the crowds. It was divided into separate areas for men and women, and flood lights were installed for round-the clock access. I visited at night, making my way through a crush of men standing shoulder to shoulder, some saying Psalms, some singing nigunim, some lighting candles and trying to place them near the grave, some engaged in kabbalistic prayers, some having conversations with the Ari z”l at the top of their lungs. It was a loud and boisterous scene, with guys pushing and jockeying for position to get as close as possible to the grave. I found a spot by a railing, held on tight and engaged in a contemplative practice for visiting the grave of a Tzaddik, as described by Rabbi Hayyim Vital in Sha’ar Ha-Yichudim, based on the Torah of the Ari z”l. If the Ari z”l tells you how to visit and converse telepathically in learning with the consciousness of a loved one or Tzaddik at a gravesite, it’s probably a good way to visit him as well. But I have to admit this was a challenging environment for a profound contemplative practice.

Then at one point the voice of a woman amplified by a megaphone rose above the din – she had made her way into the heart of the men’s section. At first there was an even louder roar of protest from the men, drowning out her voice, but she persisted. She got up on a bench and it became clear she was a policewoman and was urgently trying to get everyone’s attention, but you still couldn’t hear her clearly even with the megaphone. Then she pointed over the edge of the platform and people turned around to look – and it became clear: a large fire was raging not far from us, spreading in a long line across the mountain. There was a strong mountain wind that was blowing it our way. She tried to get people to evacuate the area and was only partly successful. People remained calm – maybe too calm. Some continued to pray, but the smoke started blowing in strongly. Eventually most people made their way up the mountain and stood watching the firemen working to get control over the blaze from multiple directions, including from the air. It took several hours. Thank God, no one was hurt.

The next day a Hassidic newspaper waxed poetic, trying to interpret the event in a positive light as a sign from Heaven: the fiery passion and enthusiasm of the faithful was reflected in a holy fire. I don’t know. That fire, probably sparked by carelessness with a yahrzeit candle or a cigarette, had the effect of clearing the area around the Ari z”l’s grave for several hours. If I were trying my hand at sign-reading – a practice criticized in the Gemara as superstitious and which I avoid – I would have said that the Ari z”l had asked for help from Heaven to shoo away the holy circus around his grave so he could get a little peace and quiet. I know; I’m such a Litvak.

Interpreting signs from Heaven is a favorite pastime of some in the religious community, and the results range between silly narcissism to harmful chutzpah, as when some leaders who should know better claim to know the Mind of God and assert that certain natural calamities are divine punishments for certain behaviors they like to criticize. There’s a difference between inauthentic sign-reading, which is just shallow imaginative projection and magical thinking, versus careful attention to the subtle or overt lessons of reality.

This week’s parashah begins with a mysterious verse:

These are the words that Moshe spoke to all Israel on the other side of the Jordan, in the desert, on the plain, facing Suf, between Paran and Tofel and Lavan and Chazerot and Di Zahav.

Rashi notes that if we take this verse as defining a geographic location it doesn’t make sense. Rather, as noted in the Targumim and the Midrash Sifrei, the common theme of this list of place names is that they all refer or allude to locations in which Am Yisrael rebelled against HaShem during the forty years of wandering in the wilderness. Rashi explains:

Since these are words of chastisement and he is listing all the places in which they angered God, therefore he hid the words and mentioned them by hints, for the honor of Israel.

According to Rashi, Moshe lists these mistakes in a veiled way so as not to embarrass the nation.

According Rabbi Aryeh Leib Alter of Gur, the Sefat Emet, criticism in this allusive way has further value. He notes that the very term “devarim – words” denotes harsh speech. So the opening phrase, “These are the words,” signals from the start that Moshe will be delivering a critical message. Then, at the end of the first Aliyah of the parashah, Moshe gives Israel a blessing in the following terms:

HaShem, God of your forefathers, shall increase you a thousand fold and will bless you as He spoke to you.

The Sefat Emet observes that in the phrase “HaShem… will bless you as He spoke to you,” the same term for hard speech is used. Yet this is in the context of blessing. He cites the Midrash Devarim Rabbah:

“These are the words…” The Rabbis say: the Holy One, blessed be He, said to Moshe: ‘since they took the chastisement upon themselves, you must bless them.’ Immediately, Moshe turned and blessed them, saying ‘HaShem God of your forefathers shall increase you…’

The Sefat Emet [5649] explains that when Am Yisrael realized what Moshe was communicating to them through hints, and the rebuke made an impact on them and they accepted it, they earned blessing. And by conveying the lesson in a veiled way, not only did Moshe undercut a confrontation that would have prompted defensiveness, but he allowed the people to participate more fully and effectively in the process of coming to self-awareness. The criticism was not imposed on them. It was offered in a way that required them to decode the hints and allowed them to realize those hints referred to them and to accept the critique with open hearts.

This is the true secret of the longevity of the Jewish People: honestly accepting, even welcoming criticism. It’s how we learn from our mistakes and strengthen ourselves. It is how we pay careful attention to the lessons of history, past and present, and make adjustments and course corrections as necessary. Much of the narrative of Torah is a record of the mistakes and the fixing of the mistakes of Am Yisrael — and we treasure it and learn from it. This attitude has enabled us to survive millennia of struggle in the most dangerous neighborhood in the world, of exile from that neighborhood and return to that neighborhood, and be the stronger for it. The neighboring cultures among which we live fear criticism and shame and typically respond by shifting blame to others – and it’s why they are in cultural, moral and spiritual decline. Shlomo haMelekh says in Proverbs:

And this acceptance of criticism earns blessing, as the midrash says.

The day of Tisha B’Av exemplifies this path of learning from our mistakes. It marks the beginning of the season of Tshuvah, of national repentance, that culminates in Yom Kippur. The entire orientation of this day, in fasting, in prayer, in reading Megillat Eikhah, in immersing ourselves in the Kinot, the collection of elegies of lamentation, is all a process of accepting responsibility and criticism. All these sources emphasize the lesson that the destruction of the Beit HaMikdash and our exile from our Land were the result of our own mistakes and misbehavior, departing from the path of Torah. This is not magical thinking, it’s true historical and moral causality. It’s a hard lesson that we take upon ourselves throughout the day. But in this acceptance of responsibility is also the source of our hope: that by facing our mistakes, learning the lessons and making the corrections, we can rebuild and strengthen not only ourselves, but the whole world.

In the Gemara, this acceptance of responsibility is even applied to HaShem. In context of the discussion regarding payment of due compensation for causing a fire, the Gemara says:

“When fire goes forth and finds thorns” – goes forth by itself. “The one who ignited the fire shall surely pay.” The Holy One, blessed be He, says: it is upon Me to pay for the fire I ignited. I ignited fire in Zion, as it says “fire went forth in Zion and consumed its foundations.” So in the future I will rebuild it with fire, as it says “I shall be for her a wall of fire all around and for Glory I will be in her midst.”

Rashi explains that the fire that went forth “by itself” means that we, Am Yisrael, caused the destruction by our deviation from Torah — yet HaShem takes responsibility as if He caused it. So He promises to build the next Beit HaMikdash with heavenly fire, meaning He will transform destruction into spiritual creation — a Beit HaMikdash transformative and transcendent beyond what we can imagine.

The fire at the gravesite of Rabbi Yitzhak Luria z”l on his yahrzeit was not a positive sign from Heaven. It was a sign of carelessness. The Ari z”l stood for being supremely careful and responsible in our approach to Torah and to the world. But if we learn from it to be more thoughtful in our Avodah, more sensitive to others, more responsible on all levels, it can be a Tikkun and contribute towards the true realization of next Beit HaMikdash, may it be built speedily and in our days. 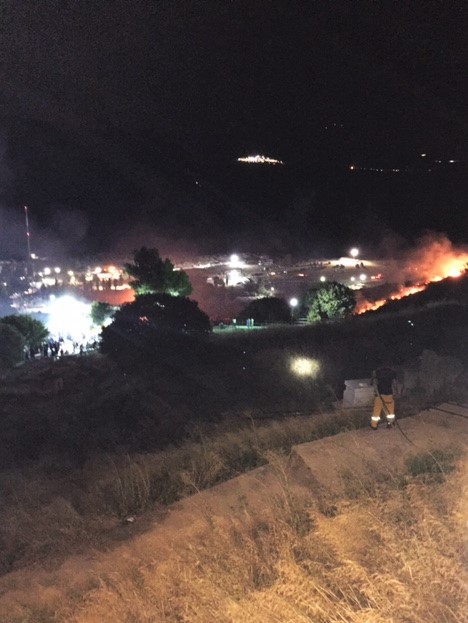 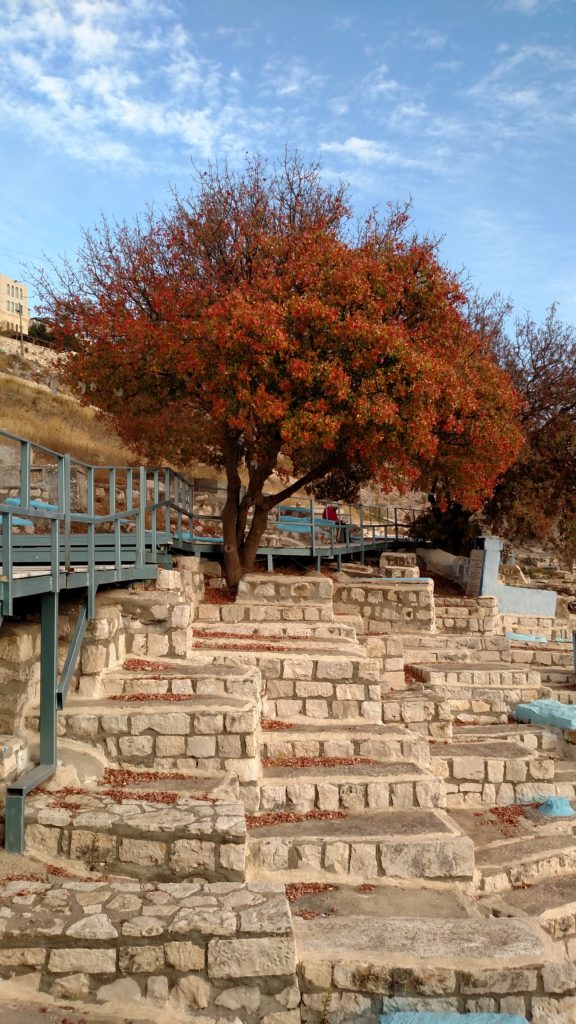 One thought on “Smoke Signals”