We joined a local Tzfat group this week on a trip down to the Yam ha-Melach, the Salt Sea. It’s one of the unusual features of the Land of Israel which is full of unusual places. At 1,412 feet below sea level, its surface and shoreline are the lowest land level in the world, and it is one of the saltiest bodies of water in the world. Floating effortlessly in the dense water with its pleasantly oily consistency is delightful, and supposedly therapeutic.

In the Tikkunei Zohar the Yam ha-Melach is called “the lower Throne… the Throne of Judgment (2a).” This is in keeping with the way the Zohar literature in general relates to the Land of Israel as a spiritual as well as physical geography. The meaning of the metaphor here is that the Shekhinah, the divine Presence, also called the Sefirah Malkhut, is the “lowest” of the divine qualities of revelation – lowest in the sense of closest to the reality of our world, and as such gathering all other “higher” divine qualities in to itself to govern our world. It is symbolized by the Yam ha-Melach, the lowest point of land on Earth, gathering the waters of the Jordan and Arnon rivers, its strong saltiness associated with the quality of divine judgment.

Rabbi Moshe Cordovero notices a contradiction, however. In another passage in the main body of the Zohar it says that the Shekhinah is called Yam ha-Melach because its saltiness quiets and soothes divine judgement the way salt improves a bitter taste (1:241a). He resolves the problem saying:

Rabbi Moshe Cordovero here invokes one of the central themes of the Zohar and Kabbalah in general – that the overall purpose of our learning and practice of Torah and Mitzvot is to “sweeten judgment” in the world. It’s an evocative phrase that highlights a dynamic tension. The basic meaning is that when human behavior in the world is immoral it’s liable harsh divine punishment. The immoral, violent behavior we see around us in some of the nations of the world demonstrates a lack of legal and moral awareness. Our mission as Jews is therapeutic: to try to heal and repair the world by ethical action through learning and teaching Torah and practicing Mitzvot to improve human relationships, sweetening and thereby averting hard divine judgment. But the very essence of Torah, as revealed in this week’s parashah, is law, judgment. Our spiritual and ethical orientation is through law – cultivating lawful behavior through correct judgment in everything we do. So we sweeten judgment through judgment. But this judgment has to be applied judiciously. An excess of legal rigor can itself be destructive and a form of violence when law is applied in a heartless and controlling way – too much salt! Our rabbinic tradition warns against excessive legalism that is not tempered by love and compassion.

Rabbi Yochanan says: “Jerusalem was destroyed only because they judged according to Torah law.” What, should they have judged arbitrarily? Rather, say: “because they set their judgments upon Torah law and did not act beyond the letter of the law.”

The Gemara gives examples of acting “beyond the letter of the law” in the sense of acting with higher ethical sensitivity, compassionately responsive to the needs of others.

Rabbi Levi Yitzchak of Berditchev observes that when God introduces Himself to Am Yisrael at Sinai, it’s not as Creator of heaven and earth but as the One who brought us out of Egypt:

God, blessed be He, mentioned the Exodus from Egypt and not that ‘I created heaven and earth,’ because the mention of Creation is only to make known that He is before all beginnings and that the world is a new creation. But the mention of the going out of Egypt, that He says “Who brought you out of the land of Egypt,” is a recognizing of His love for His people Israel. And with this He taught the nation awareness in order to implant in their hearts enthusiasm to serve Him, blessed and exalted be His Name, … and he granted them the power and ability to sweeten the judgments… and by their agency all the worlds will be conducted, and they are called “children of God,” and by virtue of this their hearts will be inflamed to serve Him, and this is an essential principle in service of the Creator.

The revelation at Sinai is not business, it’s personal. Just as our miraculous redemption from Egyptian slavery, through the plagues and splitting of the Sea, showed God’s personal, loving care for us, so, too, the revelation of Torah itself is an expression of personal divine love and care. As it says in the Midrash Tehillim on Psalm 22:

And this inspires us, in personal relationship with HaShem and modelling ourselves on His own example, to apply Torah justice in the world with love and compassion, to sweeten judgment.

Maimonides sums up the mission of Am Yisrael in an exalted vision, with which he concludes his monumental Guide of the Perplexed:

The perfection of mankind that may truly be gloried in is the one acquired by a person who has achieved, in a measure corresponding to his capacity, apprehension of Him, may He be exalted, and who knows His providential care extending over His creatures as manifested in the act of bringing them into being and in their governance as it is. The way of life of such an individual, after he has achieved this apprehension, will always have in view loving-kindness, righteousness and judgment, through assimilation to His actions, may He be exalted… (3:54)

God’s providential care for us and every one of His creations manifests divine love, righteousness and justice, and our appropriate response, created as we are in the image of God, is to live by these principles ourselves. Our trip down to the Yam ha-Melach, a reflection of the divine Throne, was refreshing and rejuvenating – and it refreshed our appreciation for our amazing Land that reflects the personal revelation of Torah itself. 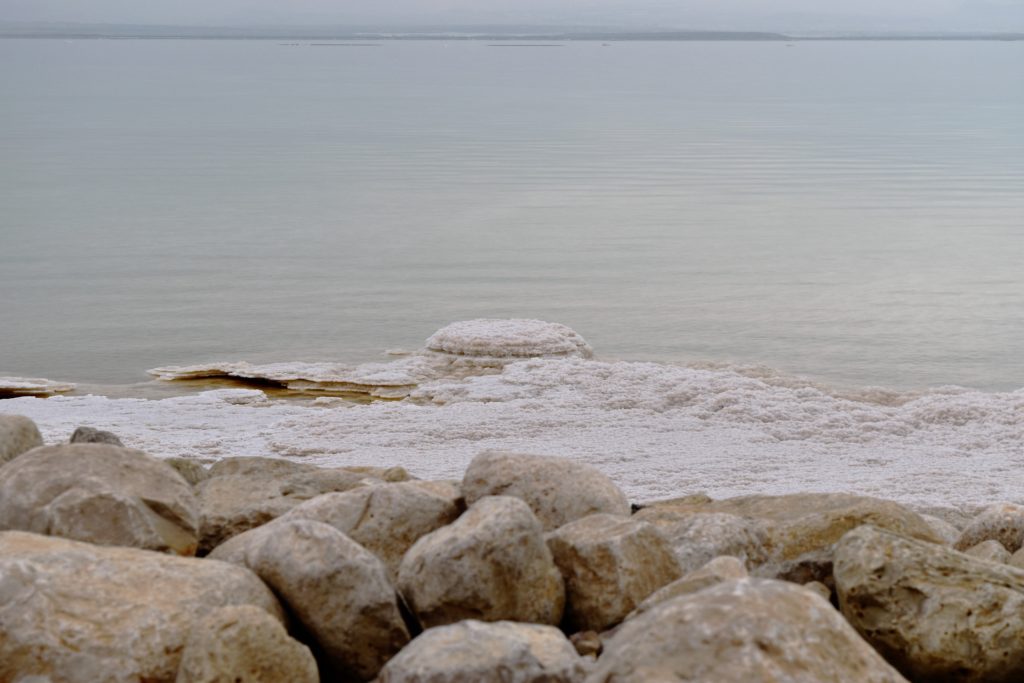