In the midst of the bombardment with 460 or so rockets that Hamas launched this week against the Israeli civilian communities of the South causing death, injury and destruction, in the midst of Israel’s retaliation carefully targeting Hamas’ terror infrastructure, there was a little Facebook post about a quixotic initiative. A group of Israelis from around the country and Palestinians from Gaza got together and cleaned up one of the beaches of Gaza. It was not the first time. This is a group sponsored by The Home, a grassroots organization of Israelis and Palestinians who meet periodically to plan and put into action similar activities around the Land of Israel, together and in parallel, to clean up the physical environment and the emotionally-charged political environment at the same time. You can read more about their work on their website and on their Facebook page here.  It may seem overly idealistic and unrealistic to even try such a thing, given the present violence and seething tensions.  But this is in the spirit of Yaakov Avinu in this week’s parashah.

In his flight from his violent brother Esav, as he approaches Haran, in present-day northern Syria, Yaakov comes across a well with a large boulder on it and three flocks of sheep gathered around the well. Yaakov asks about the welfare of Lavan’s family, and they point to Rachel the shepherdess, one of Lavan’s daughters, approaching with her flock. He asks the shepherds why they are waiting, it’s too early to be gathering at the well, why not water their flocks and get back to grazing? They explain they’re waiting for more flocks and shepherds to arrive so there will be enough men to roll the boulder off the well and water all the flocks together. As Rachel arrives, Yaakov, inspired, steps up to the boulder and rolls it off the well single-handedly and waters her flock.

Rabbi Yehudah Aryeh Leib Alter of Gur, the Gerer Rebbe, is puzzled by the sequence of events here. Couldn’t Yaakov see for himself that there was a boulder on the well, so why challenge the shepherds – “it’s clear they could not roll the boulder themselves (Sefat Emet 5639).” Rabbi Avraham Mordechai of Gur, the Rebbe’s son, suggests that Yaakov is teaching the shepherds, and us, a lesson:

that even so, you have to try. But how did Yaakov know that the shepherds had not yet tried – [perhaps they did try already]? The answer is that, even so, at every moment and every instant we’re obligated to try again.

Yaakov is a man of action, dealing with a dangerous brother, a dangerous father-in-law, a dangerous world, and still marrying and raising a family and earning a living in the midst of all the challenges. Yaakov is also a man of principles, but he knows that it’s not enough to cherish ideals in a sealed-off, protective environment. You have to roll up your sleeves and get to work to realize these ideals in the real world. And even if the challenges seem overwhelming, you have to start somewhere and keep trying. Like trying to clean up a beach in Gaza and bring Israelis and Palestinians together while other Palestinians are launching hundreds of rockets of hate.

The Greeks tell the myth of Sisyphus, condemned for eternity to the futile task of endlessly rolling a boulder up a hill just to have it roll down again, over and over. It’s an expression of their worldview of eternal return of the same. The Torah tells the narrative of Yaakov, undaunted by a massive boulder, rolling it off the well himself to help Rachel water her flock — a lesson to us of eternal renewal, to keep trying and moving forward, working towards meaningful goals however difficult they appear to be.

In The Art of War, Sun Tzu says: “Ultimate excellence lies not in winning every battle, but in defeating the enemy without ever fighting (ch. 3).”

At this moment a ceasefire between Israel and Hamas has stirred controversy in Israel. The Prime Minister has defended it based on classified information, the Defense Minister has quit over it, and the government is shaky. I have no wisdom on this. The suffering of the Israelis living in the south of Israel near the Gaza strip makes it urgent to find an effective way to end Palestinian violence. But in the long run the only hope for Gaza is regime change and a change of heart. After the rockets and the bloody warfare, if it goes that way, eventually we will all have to clean up and learn to live together. Yaakov Avinu is telling us his children to get to work, to get started now, and help roll that rock forward any way we can. 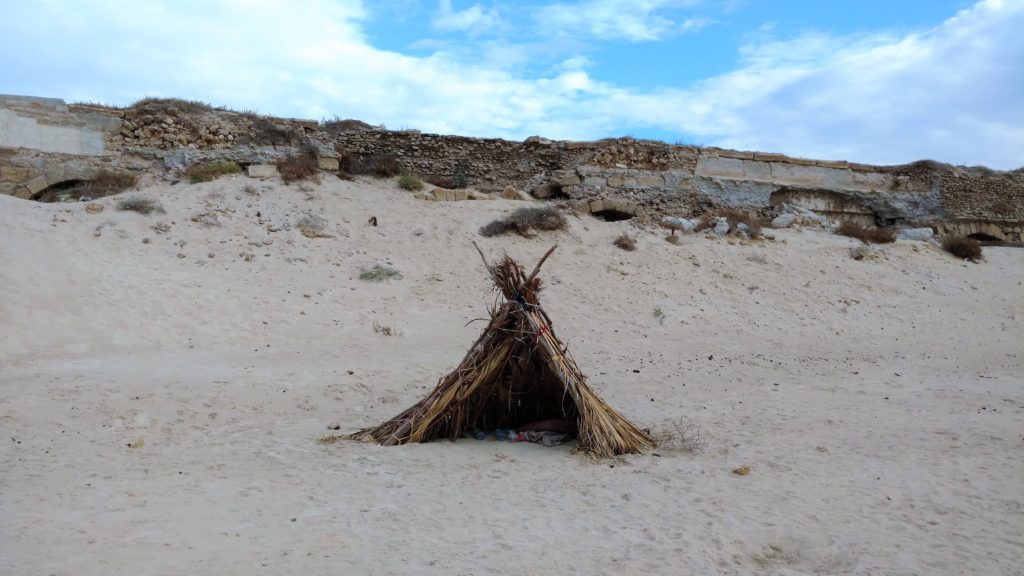 On the beach at the Roman aqueduct at Caesarea. Why leave the bottles? 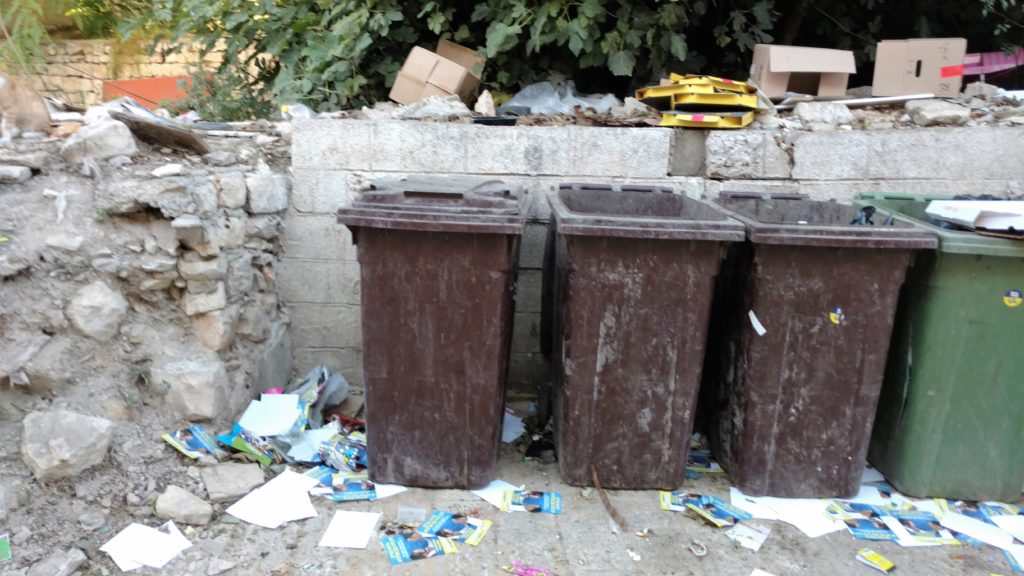 Our own city of Tzfat after the election two weeks ago. We definitely need to get a different mindset here! 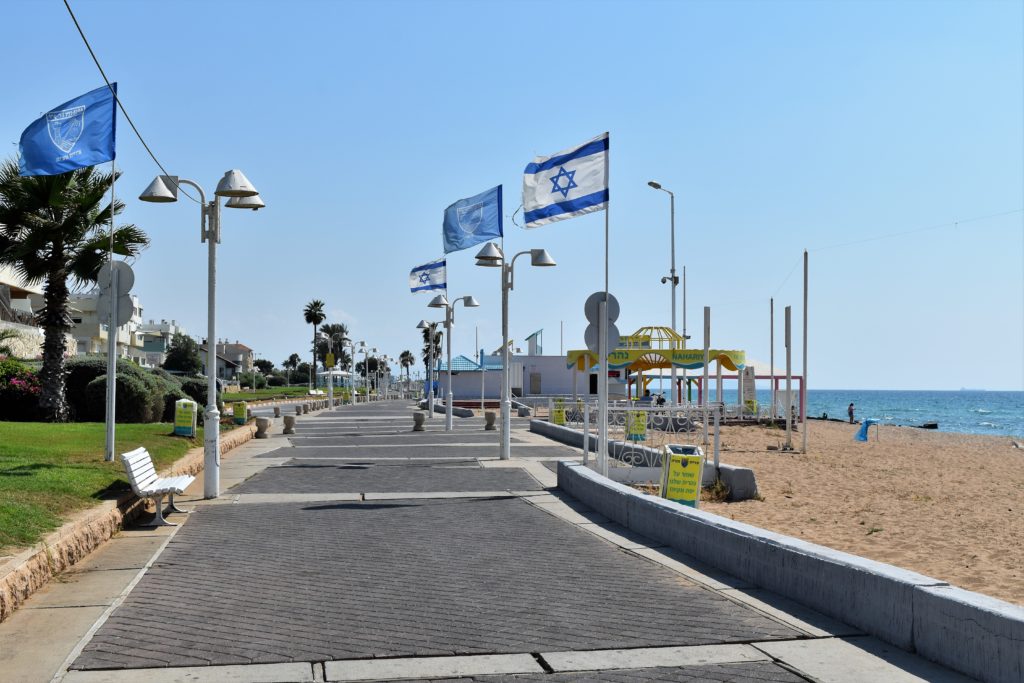 Nahariya Beach. Spotless. Do you see the yellow trash bins every short distance? This is the way to do it!