Life of souls is the air of your Land, of pure myrrh is your powdered dust, and honey from the comb – your rivers (R. Yehudah Halevi, ‘Zion’).

One of the favorite Tzfat stories concerns the great Rabbi Avraham Dov of Avritch, author of the Sefer Bat Ayin. The Rebbe, who for years had longed to move to Israel, was finally inspired to actually make Aliyah by a meshullach, an emissary from Tzfat who had been sent out to the Diaspora to collect funds for the communities of the Land of Israel. He described the beauty of the Land, the air, the mountains and valleys, the holy places, the flowers and trees and fruits and kept getting more enthusiastic until he said “Rebbe, what can I say? Even the rocks and stones of the Land of Israel are precious gems!” The Rebbe could no longer restrain himself and in 1830, at age 65, said farewell to his congregation and town and made Aliyah, moving to Tzfat.

Sometime later the fund-raiser himself returned to Tzfat and met with Rabbi Avraham Dov, asking if the Rebbe was satisfied and found what he had been seeking? Echoing the praise of Yehoshua and Kalev, the Rebbe answered that it is true, “the Land is very, very good (Num. 14:7).” The holy places, the air, the landscape, the flowers and trees and fruits – all beautiful and wonderful. “But when you said the rocks and stones are precious gems – that was an exaggeration.” The fund-raiser responded with serious, focused intensity and said “whoever is worthy – sees it!”

Hearing this, Rabbi Avraham Dov immediately secluded himself in his room for a whole year, devoting himself constantly to God in study and prayer. At the end of the year he emerged and invited the community of Tzfat to a Seudat Hoda’ah – a feast of thanks. When the people asked why he had secluded himself and why he was now offering this feast, he answered that he was now able to see that it’s true – the very rocks and stones of the Land of Israel are precious gems. (based on Pri Kodesh Hillulim 111, ed. and trans. Rabbi Shalom Meir Wallach).

This week our lift from the States arrived. As much as we knew that we really had to radically pare down what we would bring with us from the States, it was difficult to fit the stuff we brought into the charming but modest place we are renting. The day was blazing hot and the narrow, winding streets of Tzfat are a logistical challenge at all times. The movers were having a tough time of it, having to ferry our things from the large shipping container to a smaller truck and then get them down an alley and stuff them into our place. We were advised to provide plenty of cold drinks, so we kept the colas and sodas and juices and cold water from the fridge flowing, and boy did they work and drink! Most of the crew were Russian Jews living in Haifa. 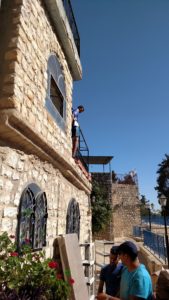 At one point I was walking back to the container truck with one of the crew, a tall, thin, smart and hard-working guy in his twenties. We chatted in our awkward but serviceable new-Olim Hebrew. He had come here six years ago from a small town near Moscow. It was clear that he is not religious, and I kept the conversation neutral. But at one point I asked him about his long-range plans and he said “to move to Canada.” Like the tribes of Reuven and Gad in this week’s parsha, who chose to settle outside the original boundaries of the Land of Israel because they found better grazing land on the eastern side of the Jordan river, this young man’s primary value was earning a good living. We compared quality of life in Israel and Canada and the States, and he asked me – “you lived in the United States. Why would you want to move to Israel?” I said: “it’s the Holy Land, it’s the Land of the Jewish people, it’s our Land.” He shrugged his shoulders. This did not move him at all. I tried several approaches to getting across the feeling we have for Eretz Yisrael, but nothing connected, and then the small truck arrived for a new load and he was back to work.

I like to think of myself as a teacher, able to relate to people of diverse backgrounds, but in this teaching moment I failed. How do you convey the feeling and the meaning of holiness to someone who has not yet had the experience or even an inkling of the feeling? How can you get across the emotional uplift and joy you feel for the Land and its people to someone who is smart and sincere but has never learned to perceive in these terms?

At the beginning of this week the moving company told us they lost track of the original paperwork for our lift and insisted that I travel to Haifa to hand-deliver re-signed copies. I was irritated that I had to take out several hours of a busy day for their mistake, but as I drove along the winding mountain roads of the northern Galil down to the sea and the port of Haifa, I was smiling more and more and my heart was singing. This Land, and its sensuous mountains and valleys and trees and sea coast and the hot air blasting in through the car windows, is very, very good. How do I convey that to a young Jew from the former Soviet Union whose communist and post-communist education suppressed and ignored a sense of the holy?

This problem is personal and it is national. Israel is misunderstood not only by our enemies and those who wish us ill, but by many Diaspora Jews as well, especially young Jews who are being intimidated and indoctrinated with anti-Israel propaganda and animus on many college campuses across the United States, Canada and Europe. How do we convey the truth of Israel and the historical connection of Jews to our holy Land, how do we explain our core narrative to our own people? That the world indulges the barbaric violence of our enemies and finds absurd ways to fault us is so obviously perverse. Yet we can’t seem to get across the exalted ethical vision of Israel that champions the sanctity of human life and cultivates a society guided by justice and compassion. This is an urgent teaching challenge and we are not yet succeeding.

To ramp up his sense of the holy, that the very stones of the Land of Israel are precious gems, Rav Avraham Dov of Avritch secluded himself for a year in contemplative practices. To truly sense the holy requires progressive transformation of consciousness. This is why we have brought Tal Orot to Israel. When the mind is quiet and open and awake the beauty of the pure gift of life in this world begins to dawn on us, and even the rocks and stones sparkle with the light of the Infinite.

Fortunate is the one who waits and arrives and sees the rising of your light, over whom your dawn breaks forth, to see the welfare of your chosen ones and exult in your joy in your return to your youthfulness of yore (‘Zion’).