We were in Netanya earlier in the week on the way to teach a shiur, and took time to walk along the seacoast promenade on a warm and partly sunny afternoon. (I don’t mean to rub it in for those of you who just got socked with another snow storm – I’m just setting the scene). At one point a jogger in shorts and sneakers, no shirt no hat, came running towards us and suddenly stopped and asked us in Hebrew: “do you think it feels like the Mashiach is coming soon?” I answered “bimeheirah biyameinu – speedily, in our days.” With that opening question he went on to discuss, earnestly and insightfully, the precarious geopolitical situation and to assess the social dynamics of Israeli society. The heart of his complaint was the dangerous resurgence of narrow tribalism throughout the world and in Israel as well. He observed that even many of his friends are locked in their own little groups and don’t care about the unity and solidarity of Israeli society as a whole. This narrowing of care is fracturing our society, which is bad enough, and it’s making us vulnerable to our enemies. We talked this over seriously for about five minutes and then he continued his run.

The jogger’s opening, attention-grabbing question in this out-of-the-blue encounter put us in mind of the passage in the Haggadah about the fourth child, the one who does not yet know how to ask:

As for the child who does not know how to ask, you open for him, as it says “and you shall tell your child on that day saying ‘because of this that HaShem did for me in bringing me out of Egypt.

The term פתח in talmudic usage means to open in the sense of starting a discourse, but it’s an evocative expression. How does the directive to “open” for your child relate to the proof text cited? We might say it’s simply that the Torah says “you shall tell your child” – get started telling the story. But Rashi in his commentary on the verse in the Torah notes perceptively: “here, when it says ‘you shall tell your child (והגדת לבנך)’ it refers to the child who does not know how to ask, and the verse teaches you that you should open for him with words of aggadah that draw the heart (Ex. 13:8).” Rashi is drawing our attention to the Torah’s choice of the word “והגדת” whose Aramaic cognate root, as in aggadah, means “to draw or attract.” Aggadah, in Hebrew haggadah, is not just information – it’s midrash, telling a story in a playfully associative, meaningful and thought-provoking way. We are not just to pour information into our children, but to help open their minds and draw their hearts to the meaning of the redemption from Egypt. How do we do that?

The Mishnah Pesachim states that when the second cup of wine is poured at the Seder:

Here, at this point, the child asks his father. And if the child does not yet have the knowledge, his father teaches him: “what is different about this night from all other nights…?

It’s significant that the father teaches – not at first by giving information, but by teaching the child how to ask questions. In the Haggadah the young child is described – not just as lacking knowledge, but as not yet knowing how to ask a question. The other three children, whatever their attitudes, at least pose questions.The Gemara goes on to note that the Mitzvah of Sippur Yeziyat Mizrayim, telling the story of the going-out from Egypt at the Seder, proceeds by question and answer, and changes in the typical order of a meal are made throughout the dis-orderly Seder to provoke questions (Maimonides, Mishneh Torah, Hametz uMatzah 7:3). Rav Hayyim of Brisk notes that asking questions and offering answers requires that we engage with others, so the fulfillment of the Mitzvah of Sippur Yeziyat Mizrayim is ideally a group experience, bringing us together around the Seder table (Hiddushei haGaon Rav Hayyim, 33). This method of collective questioning is essential to the entire Pesach experience. Why?

Rabbi Gershon Henokh Henekh Leiner in his Sod Yesharim notes that the power of a true question is that it’s an opening that enables us to reach beyond ourselves. Rather than bringing the mysteries of the world down to our level, a true question opens our minds and hearts to what is beyond us. And in asking questions we open to others as well. Rather than closing ourselves off in our own minds, we share wisdom with each other. In this sense questions are not just instruments of intellectual inquiry, they are instruments of redemption itself. He says of the redemption from Egypt: “This salvation was aroused from the aspect of questioning and new insight, and this is why we make changes [at the Pesach Seder], to ask and to answer and to teach that we always need to establish in our hearts questioning and crying out, and by virtue of this the [ultimate] salvation will be aroused earlier (Sod Yesharim, Hag haPesach, sec. 3, 10b-d).” Questioning is a way of challenging the status quo and embracing change and new possibilities. When Bnei Yisrael learned to question and look beyond their enslavement and cried out, realizing they did not need to be stuck in Egypt, they were able to awaken to the new opportunity for redemption. So, too, for all of us, our questions at the Seder table teach us to think together critically and challenge assumptions and the status quo in our own lives. In sharing our wisdom and pooling our insights we can help each other awaken to the opportunities to make the changes that need to be made for continued growth together.

So we appreciated the odd, out-of-the-blue encounter with a guy asking questions and challenging the direction of the world today and crying out for unity and solidarity among Israelis and among all human beings. We’re grateful we had a little time to be open to him and to the moment. Maybe he was a little bit off. But he was also on. Maybe the questioning we all do together really can open up new horizons and new visions of the high human potential to which our Torah tradition is calling us and all humanity. 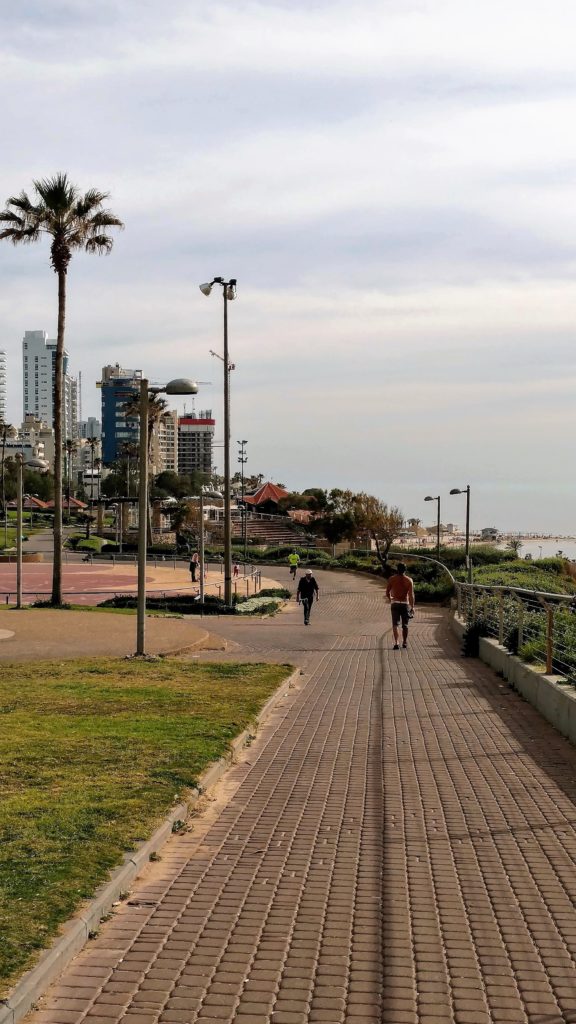 Our jogger friend, after our encounter 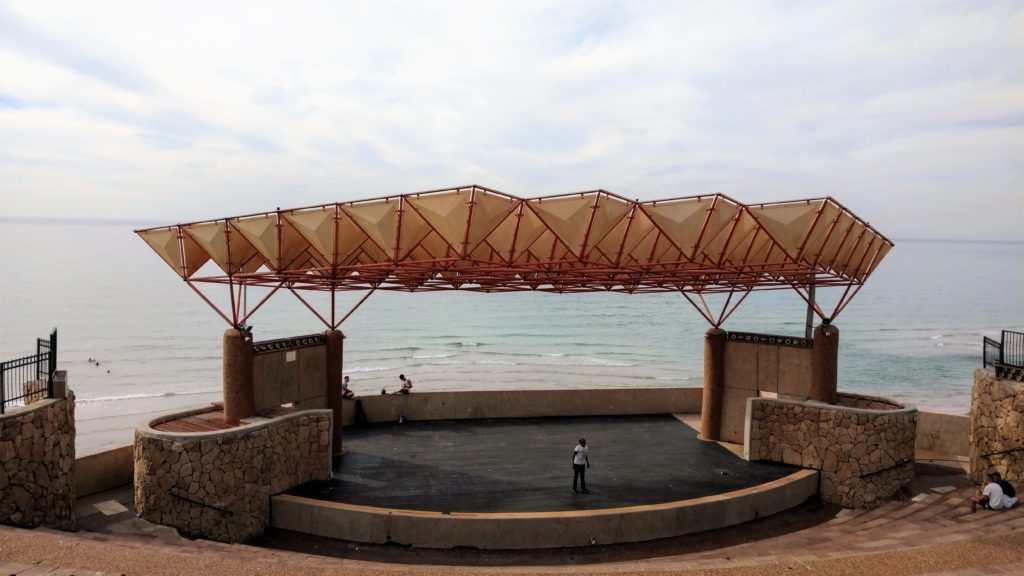 All kinds of characters on the Netanya Beach 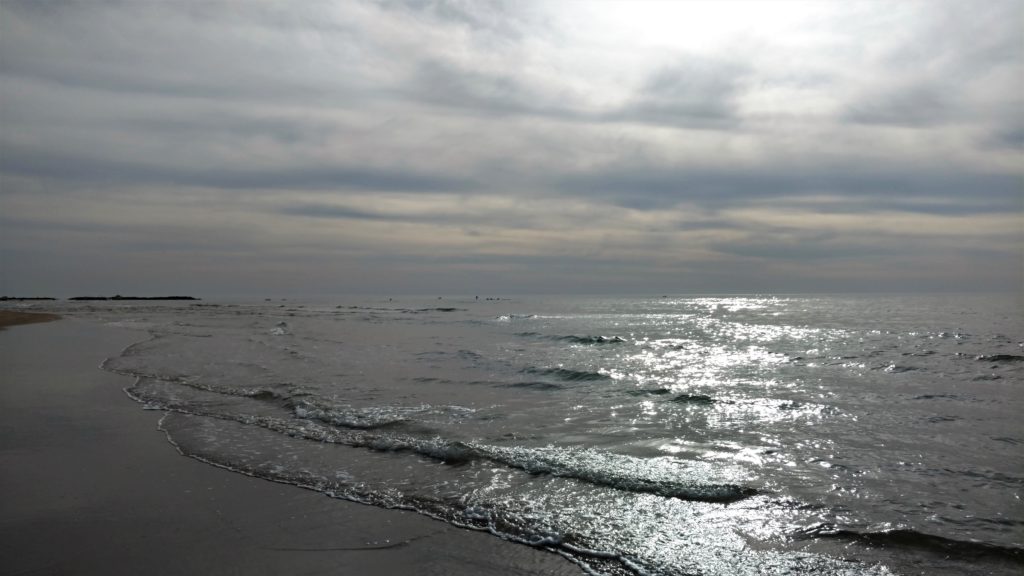