In Erez Yisrael in the long dry summer season the phrase “morid ha-Tal” is added to the Amidah, in nusach Ashkenaz as well as Sefarad. We praise HaShem Who “brings down the dew” in the early morning, distilled out of thin air, to refresh an arid land. There’s something about this subtle, gentle phenomenon that expresses a mysterious principle at the heart of the Land of Israel.

In a small shop in Efrat we were looking for gifts for those who have done us favors (many favors!) when a man comes in and asks the shopkeeper if she has a Mazal Tov card for someone who has passed their driving test. The shopkeeper wonders if there really is such a randomly specific card. The man leaves and comes back a few minutes later – he found the card in another shop and wanted to show the shopkeeper. Sure enough, in Hebrew – “Mazal Tov on passing your driving test – now drive safely.” The man explained that it was for someone who finally passed after eight tries.

In Tzfat this week, I went to an early morning minyan at the Beit Knesset Ha-Ari z”l, for Rosh Hodesh. On my way back from Shul, through the steep, still streets of the Old City, I saw an older woman, with a large backpack, walking with great difficulty, using two metal walking canes with cupped metal wrist supports. One step after another, every step was an effort. A couple of hours later, we saw the woman again, a few blocks up the hill from where I first saw her. And we saw her again a few hours after that, a few blocks past that. Tzfat is a very vertical town, built on a mountain-top. To walk the streets for this woman was a great labor, and she walked great determination, on and on. 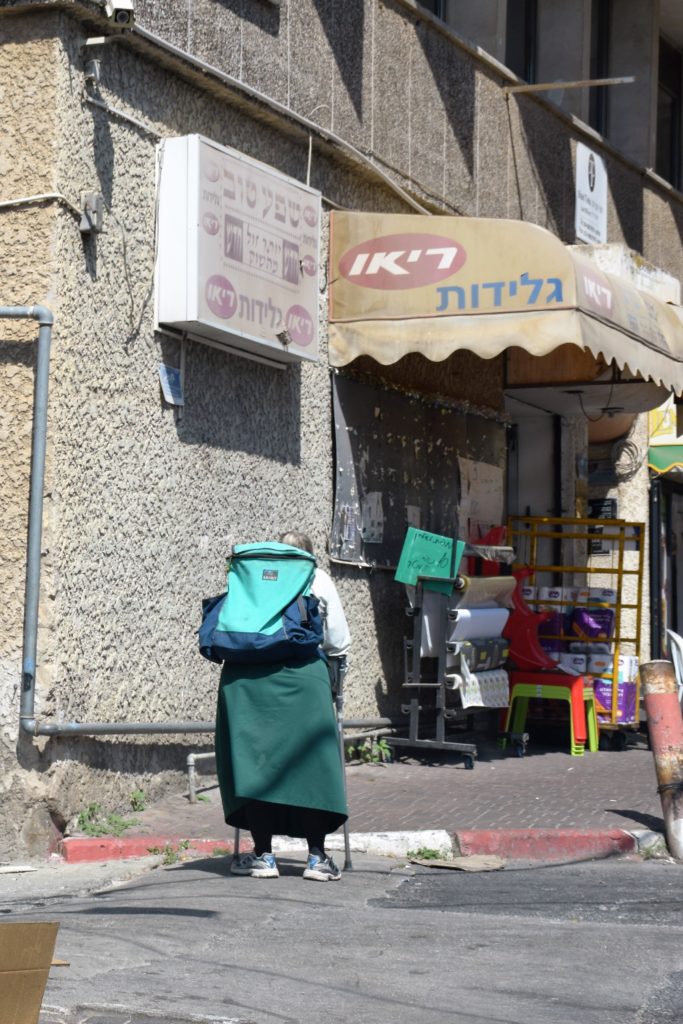 Our first night in our new rental home in Tzfat was more like camping out – it wasn’t set up yet. It was fine for us, but for Saba Raba, spry and spunky as he is, it was a bit too rustic. So he took a room in one of the small boutique hotels nearby. His room had a balcony with a spectacular view of Mount Meron and the surrounding mountains across the valley from Tzfat. The next morning, he knocks on our door and says we have to come with him. He’s smiling mysteriously, and uncharacteristically quiet. He takes us back to his room, out to the balcony. He had been up early, shortly after sunrise. He tells us he was out on the balcony davening. The town is quiet, some birds flying and chirping, a few dogs barking, the mountains and the valley wrapped in some early morning clouds, the blue sky brightening. He is davening the Shema and suddenly the world opens up for him. He feels the total oneness of all Being. At one with God, mountains, clouds, sun, birds, dogs, all people, all beings. He describes it beautifully, and he is mellow all day. He has said the Shema thousands of times in his life. All of a sudden he has a new and profound experience of the Shema. 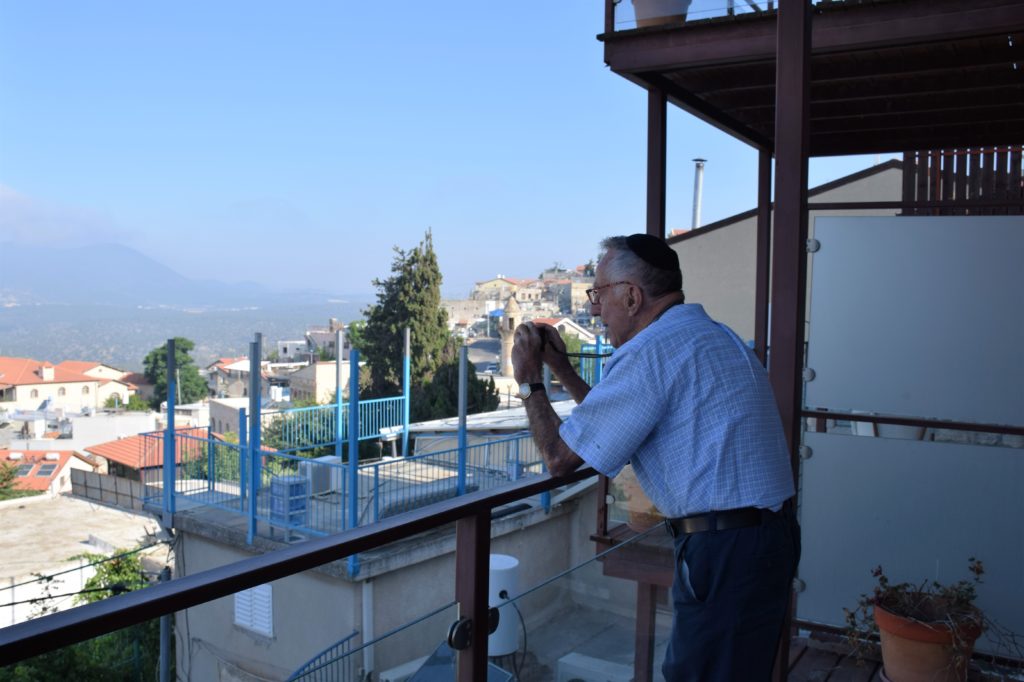 on the balcony in Tzfat

In a supermarket in the Gush this Thursday, I am introduced to the grandmother of thirteen year old Hallel Yaffa Ariel, Zikhronah Kadosh, who had been murdered by a Palestinian teen last Thursday in Kiryat Arba. What can you say? With a look that is gentle but strong, she says: “there are no words.” Rabbi Michael Mark, Zekher Tzaddik ve-Kadosh liVrakhah, father of ten children, director the Yeshivah of Otniel, was murdered last Friday, on the road near Kiryat Arba. At the beginning of this week his Levayah wound its way up the road to Jerusalem. In the course of the week it became known that the first responders to the scene of the attack were two Palestinians, a doctor and his brother, who protected the surviving wife and children from further attack, called an ambulance and helped stabilize them, stanching their wounds until help arrived, saving their lives. It was reported that the doctor, in his youth, spent time in an Israeli prison for terrorist activities.

In this week’s parashah, parashat Hukkat, when Bnei Yisrael are thirsting for water, HaShem instructs Moshe and Aharon to “speak to the rock in their sight and it will give forth its water. Instead, Moshe strikes the rock with his staff. Though water does flow, Ha-Shem punishes Moshe and Aharon:

HaShem said to Moshe and to Aharon ‘because you did not have emunah in Me, to sanctify me in the eyes of Bnei Yisrael, therefore you shall not bring this congregation to the Land I have given them.

The commentators through the generations struggle to understand the nature of the sin, the severity of the punishment – not to merit to bring the nation to the Land of Israel. Where is the lack of faith? What’s the substantive difference between speaking to a rock and hitting a rock to bring forth water – it’s miraculous either way.

Rabbi Meir Simcha HaKohen of Dvinsk, in his Meshekh Hokhmah, suggests that the difference is critical. HaShem’s intent here was to have Moshe and Aharon transmit the essential lesson Bnei Yisrael needed for life in the Land of Israel. They were punished by not being permitted to bring the congregation into the Land because they failed to teach this lesson. This is an extraordinary Land. In this Land, Bnei Yisrael can attain the level of awareness they experienced at Mount Sinai, when they “saw the voices” and experienced the power of divine Speech (Ex. 20:14). In this Land you don’t hit rocks, you can speak with rocks. No violence is necessary. You can talk, you can reason, you can commune and communicate. If this is so for rocks, all the more so for living creatures, all the more so for human beings.

This does take emunah. Emunah is not faith, the usual English translation. Emunah is not belief – to believe is to pretend something is true when you don’t really know it – not a very high level of awareness. Emunah is from the same root as uman – a craftsperson who is steady and skilled with their hands. To have emunah is to be steady and skilled to persevere in the face of difficulty and adversity, to trust in HaShem that, despite the challenges, He will open up possibilities to move forward. To open a rock to bring forth water. To pass a driving test after eight attempts. To put one foot in front of the other, in spite of age and infirmity, to make your hard way up and down a mountain-top town. To discover new, profound spiritual insight and deep meaning in a prayer said thousands of times. To find people of gentleness and compassion, people with whom we can talk and share and support each other in our humanity, in the midst of terror, among erstwhile enemies. To find dew in the early morning, distilled out of thin air, refreshing grasses, bushes and trees in an amazing Land of possibilities.