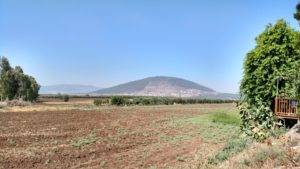 We were travelling in the lower Galil this week and came upon Mount Tavor, a commanding presence among the surrounding hills and farmland. It prompted us to sing the verse from the venerable zimrah “Ha-Mavdil” for Motza’ei Shabbat, already found in the Mahzor Vitry: “צדקתך כהר תבור — Your righteousness is like Mount Tavor.” According to R. David Shlomo Eybeschutz in his Arvei Nahal, the image weaves together a verse from Tehillim 36:7: “צדקתך כהררי אל — Your righteousness is like the mighty mountains,” and a verse from Yermiyahu 46:18: “כי כתבור בהרים – like Tavor among mountains.” Rashi explains that Har Tavor is especially solid and permanent among mountains.  With Har Tavor in front of us, it brought the verses alive. We could see why it was chosen as a prophetic symbol. It’s strikingly symmetrical, an almost perfect hemisphere. It projects powerful solidity, yes, but even more. To say Ha-Shem’s righteousness is like Har Tavor conveys not only that His righteousness is powerfully permanent, but that it is whole, consistent, even-handed, real and amazing.

This is an important lesson in itself. This week’s parsha, Parshat Balak, is the parsha of comic relief. Set after of a series of troubles and set-backs for Am Yisrael, that leave them feeling especially vulnerable, suddenly the Torah switches perspective and looks at Am Yisrael from the perspective of Balak, king of a Canaanite nation threatened with conquest. From Balak’s perspective, and the perspective of Bilaam, the prophet he hires to help him, Israel seems like an invincible juggernaut under divine protection. So Balak and Bilaam attempt to manipulate God by trying to place a curse on Israel. Balak and Bilaam come off as cartoon-like buffoons on the peshat level, but the Zohar sees something deeper and more dangerous going on. According to the Zohar, Balak is a master magician, even more canny than the prophet Bilaam. Their efforts to manipulate God are the very essence of magic, trying to impose human will on God and God’s world, short-circuiting real natural and moral causality.  Various forms of magical practice are explicitly prohibited by Torah.

The Zohar’s interest in the dangers of magic are not just esoteric. The fact is, magical thinking is widespread among us all. We tend to project our own expectations onto the world. We impose our own narratives onto events, to create a linear interpretation that may not accurately or truthfully reflect what’s going on at all. We have our little magic thoughts and actions by which we try to get our way in the world.  We even try to game God – maybe not with crude magic like Balak and Bilaam, but in subtler ways, making deals of all kinds, sometimes even enlisting Torah learning and halakhic practice. And when the little deals we set up don’t work in getting us what we want, we are disappointed, and start blaming. The Rambam in his Guide of the Perplexed, Part III, warns that the basis of human suffering is thinking that we are the center of the world and everything revolves around us. This leads to unrealistic expectations, doomed to be dashed. It is narcissistic magical thinking that is the essence of existential suffering. God’s righteousness is like Har Tavor – whole, consistent, even-handed and real. You can’t manipulate God. The Zohar is warning us to be vigilant to avoid magical thinking at every level.

The antidote to this attitude is being realistic – quietly observing the way the world and Rezon Ha-Shem really work. But this doesn’t mean depressive cynicism. Quite the contrary. It is being open to the wonders of God’s Will. We took a tour boat ride on the Kinneret this week with the family, an activity my father-in-law could enjoy. Most of the people on the boat were from a senior citizens’ group. As the boat puttered out onto the lake, Mizrachi music started up on the loudspeaker. The elderly women got up and started dancing together – women in their eighties and nineties. And though I should not have been looking – I have to say, those ladies had moves! They even invited my father-in-law to join them, and he acquitted himself quite well. We realized: every one of the seniors on this boat has a story, a long, convoluted and probably difficult life story that brought them to the Land of Israel, to this moment, on a boat on the Kinneret. Whatever they had been through, including the pain etched in their very bodies, whatever they experienced, they brought to their dance. And they danced with joy. That’s real. It’s a realism that is magical in itself. Not our magic – God’s magic – real and amazing.