It has been raining hard in Tzfat and throughout much of Israel for the last few days – a much-needed rain, but it’s been cold, dark and dreary, and we were socked-in with thick mountain fog. The residents of Tzfat have been hunkered down in our under-heated and somewhat leaky stone homes, trying to stay warm and dry. But today there was a break in the clouds and we had a brisk, sunny afternoon. The streets were bustling with residents and tourists enjoying the sunlight, reminding us that there is light behind the clouds that can break forth at any time.

When Yosef is brought before Paro to interpret the dreams of the cows and ears of grain, Paro makes mention of Yosef’s reputation: “…I have heard say of you that you listen to a dream to interpret it (Gen. 41:15).” Yosef demurs, however, and explains:

Yosef answered Paro saying “It is not me. God will answer to the satisfaction of Paro.”

Now, when the dreams are interpreted, it is Yosef who actually does the talking. But as Rashi explains here, Yosef means: “’It is not me,’ the wisdom is not from me, rather, ‘God will answer’ – He will put an answer in my mouth to the satisfaction of Paro.” As R. Eliyahu Mizrahi elaborates in his supercommentary on Rashi: “It’s not that God will answer directly, for if so, Yosef should not have interpreted,” rather, “He will command my mouth to answer to the satisfaction of Paro.” So on the one hand, Yosef’s response to Paro seems self-deprecating and modest – “it is not from me.” Yet in truth, he is making a more daring claim. Yosef confidently guarantees that God Himself will speak through him. Holy chutzpah!

But this is really what Torah is all about: that God breaks into our reality. In our daily lives we tend to get inured to the status quo, defining our possibilities by what seem to be the limited elements of the world around us. This occurs on the communal, national and international levels as well. Diplomacy, for instance, as it is practiced these days, seeks to make a virtue of maintaining a rickety status quo even among bad actors, when more gutsy, out-of-the-box approaches might be more ethical and more effective. Torah comes to remind us that the context of our world is not limited. Rather, we float buoyantly in the Infinite, and God “looks through the windows, peeks through the lattices (Song of Songs 2:9)” in unexpected ways – around us and even through us.

This is the message of Hanukkah as well. The central symbol of Hanukkah is the miracle of the Menorah that burned for eight days on a day’s worth of oil. The Talmud indicates that the Menorah in the Mishkan and Temple is a symbol of wisdom (Baba Batra 25b). But it is a special wisdom. R. Yehudah Aryeh Leib of Gur in his Sefat Emet (Bereshit, Hanukkah, 5661) citing R. Eleazar of Worms, says that the light of the Menorah symbolizes the hidden light of the first day of Creation. Their reference is to the statement of Rabbi Eleazar in the Gemara Hagigah (12a), that the light of the first day was not the physical light of the sun, moon and stars, but a light by which “one could see from one end of the world to the other,” which was hidden due to its preciousness, but reserved for the righteous. It is the light of which Yeshayahu speaks, saying:

This seven-fold light is itself a metaphor – for the divine source of consciousness. In the Messianic era, says Yeshayahu, the sevenfold light, the original light of Creation, always present but hidden, will once again shine forth. It is seven times brighter, not in a physical sense, but in the sense of a greater clarity of consciousness, a high-definition consciousness, so to speak. It is the light of prophecy and all inspired wisdom. This is what we commemorate when we kindle our hanukkiot: the light that breaks in from beyond, all the time, reminding us that there are new possibilities and limitless divine resources.

It is a light that breaks through the status quo. By this light, Yosef could alert Paro with out-of-the-box wisdom to avert an unexpected crisis barreling down upon Egypt and the world. By this light, the Maccabees could envision a new political and religious reality, even against great odds, and shake off the Greek occupation of their Land. By this light, Israel today can stand against the venal, violent and hypocritical nations of the world that prefer to harass a peaceful and peace-seeking nation rather than address the carnage and bloodlust going on in Syria, throughout the Middle East and in much of Africa. By this light, each of us in our own lives can find new inspiration and new possibilities for fulfillment and enlightenment. May the light of Yeshayahu’s prophecy break through the clouds and fog of this world, and be revealed speedily, in our days.

Looking towards Mt. Meron from Tzfat 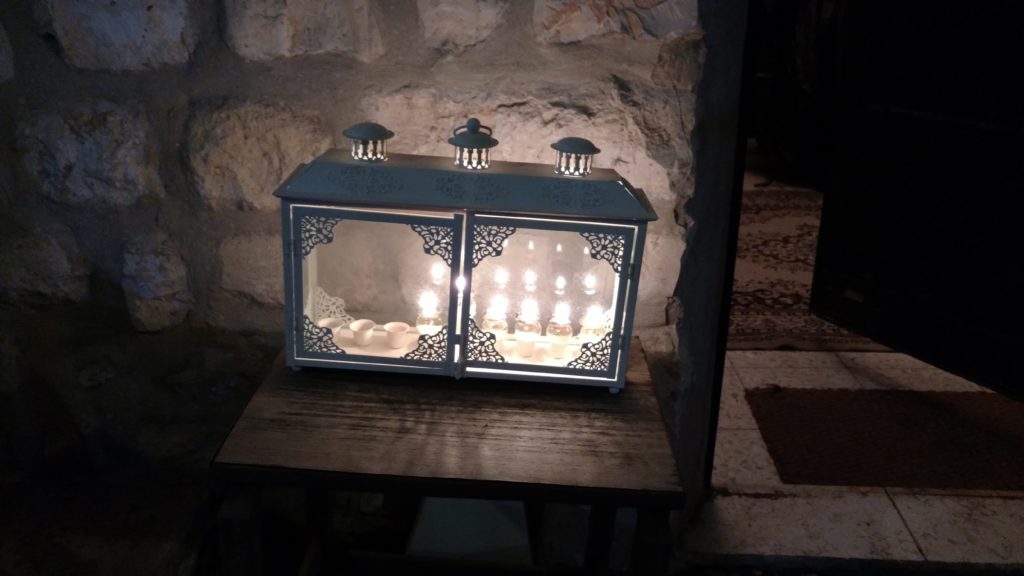