The other day I was walking past a little courtyard in Tzfat when I heard a fluttering sound and saw a blur out of the corner of my eye. It took a moment to focus and realize what was happening. A small cat leaped and caught a pigeon in mid-air. The two were almost the same size. They came tumbling together to the ground, rolling furiously, feathers flying, with the cat very much in control, hugging the pigeon in its claws, its jaws clamped firmly on the bird’s neck. I did not stay to watch the rest.

The feral cats of Tzfat, and of most cities in Israel, are a real presence. They prowl everywhere, from alleyways to rooftops. These are not your pampered American house cats. They’re lean, mangy and tough. Even though there are several elderly women who wander around town putting out food for them and talking to them, they don’t need our help. These are little tigers and their world, for them and the creatures close to their size, is very much a jungle.

Well, you know, the world just 30 kilometers to the east of us is also a jungle. Human depravity is on full display in Syria, and much of the Middle East is still mired in a culture of violence, tribalism and oppression, no better than ancient times. At least the cats here only kill to eat. 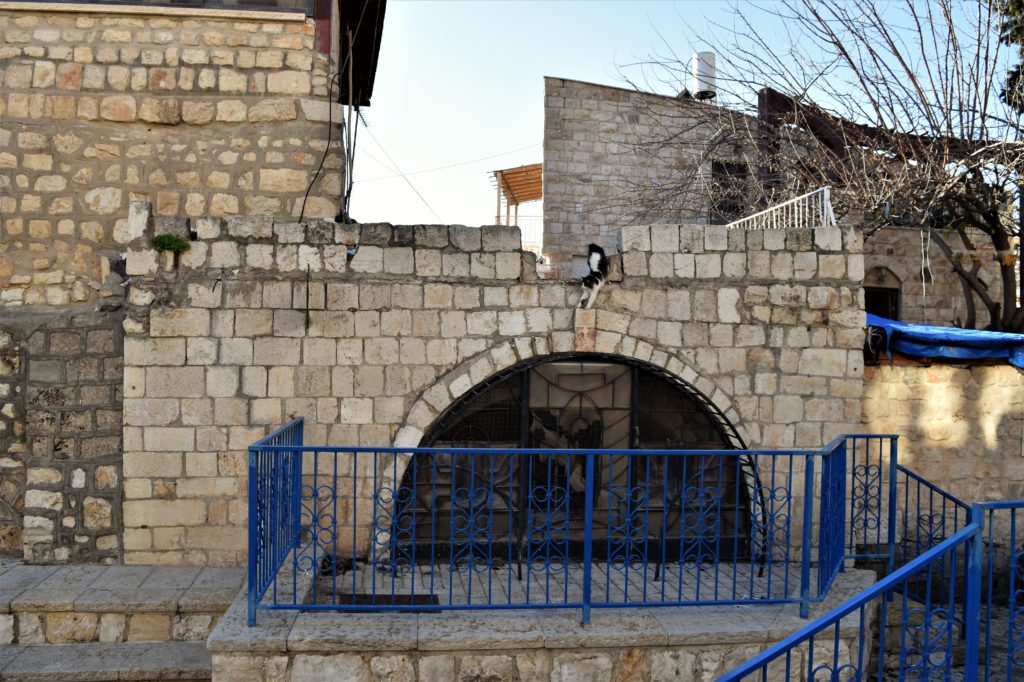 In contrast to the predatory nations around us, HaShem gave the people of Israel a key to endless survival: the Torah. The laws of Torah encourage us to treat each other fairly and equitably, to support each other and stand up for each other, loving each other as ourselves. Through the mitzvot of Torah a just society was created, a laboratory for human development towards a transformative ethical vision for a blessed, enlightened life, not just for Israel, but for all humanity.

This week’s parashah seems like a miscellany of laws, but there’s order and structure to it, and guiding principles. Throughout the parashah, which deals at great length with torts and damages, נזיקין,  and their avoidance, there is concern to maintain care and responsibility for others, and a sense of fairness and equity in all our dealings. As it summarizes in the Gemara Baba Kama:

Rav Yehudah said: a person who wishes to be righteous, let him fulfill the laws of torts and damages.

At heart, it’s a vision of fairness, expressed in the verse:

The commentators acknowledge that this is a difficult verse to parse. It is interpreted in a wide variety of ways in the Gemara and midrashim, largely as warning judges to maintain their integrity and balance. Ibn Ezra focuses on its key word:

The word “incline” – is used disparagingly throughout Scripture, found also in non-juridical situations: “those who incline against the stranger (Mal. 3:5).”

To be fair is to be balanced and upright. To incline is to lean towards or away, in favor or disfavor, to manipulate and take advantage. According to Ibn Ezra this verse warns us all against inclining unfairly against others, whether in formal litigation or in everyday relationships, especially against the weak and disenfranchised.

The vision this parashah, and the entire Torah, cultivates is of fairness and equity, of justice. To accomplish this requires of each of us a fundamental shift in viewpoint, a shift out of self-centeredness, what Piaget calls “decentering.” For Piaget this is the first step in developing moral maturity. Fairness, to favor neither ourselves nor others, requires honestly acknowledging that we are not the center of the world, that there are countless others like us. It requires truthfully acknowledging the precious value of others, all other human beings, all other creatures.

This is the punchline of the book of Job. In its climax God confronts the suffering, complaining Job from the whirlwind saying:

Where were you when I laid the foundations of the earth? Declare if you know discernment.

God goes on to lay out a vast vision of creation and demonstrate to Job his small place in it. Maimonides summarizes his magisterial commentary on Job in his Guide of the Perplexed saying: “Know that the majority of false imaginings that call forth perplexity in the quest for the purpose of existence of the world as a whole or every part of it have as their root an error about man himself and his imagining that all that exists, exists because of himself alone (3:25).” The mitzvot of the Torah guide us to shift our vision beyond ourselves, to a divine perspective of equity.

Rabbi Isaac of Acco, thirteenth century kabbalist, suggests that this perspective can be facilitated and enhanced through meditation practice. After laying out a meditation regimen that cultivates constant attentiveness to God, devekut, he says:

The equanimity he speaks of is not merely the stoic concept of ataraxis. He explains that it derives from one’s constant contemplative connection to HaShem, viewing all of reality from this vantage point. This vision beyond ourselves grants us an enduring emotional balance and a deep appreciation for every other being in God’s creation.

We took a walk the other day through the mountain meadow and forest on the outskirts of Tzfat. The weather is beginning to warm and all over Israel buds and flowers are beginning to appear – especially the anemones. We weren’t sure if this flowering had yet reached the higher elevations here in the northern Galil.

Come my beloved, let’s go forth to the field, let’s lodge in the villages. Let’s arise to the vineyards, let’s see if the vine has flowered, if the blossoms have opened, if the pomegranates are budding; there I will give my love to you.

As it turns out, yes, the anemones have begun to blossom. Gorgeous rich red flowers, with an inner ring of beige setting off the deep purple stamen at the center. It’s still early in the season, so it’s an anemone here, another one there, each burst of color the more precious because we can appreciate each as a unique individual. Each flower reflects on all the other bushes and trees of the forest, reminding us of this deep vision of full, radiant existence for every single one of God’s creatures, the vast, peaceful vision of Torah, bringing us to our higher nature.

The wolf shall dwell with the lamb, and the leopard shall lie down with the kid. The calf and the young lion and the fatling together, and a child shall lead them. The cow and the bear shall graze together, their young ones lie together, and the lion shall eat straw like an ox. And they shall not hurt or destroy in all My holy mountain, for the earth shall be full with the knowledge of HaShem like water covers the sea. (Is. 11: 6-9)

Speedily, in our days. 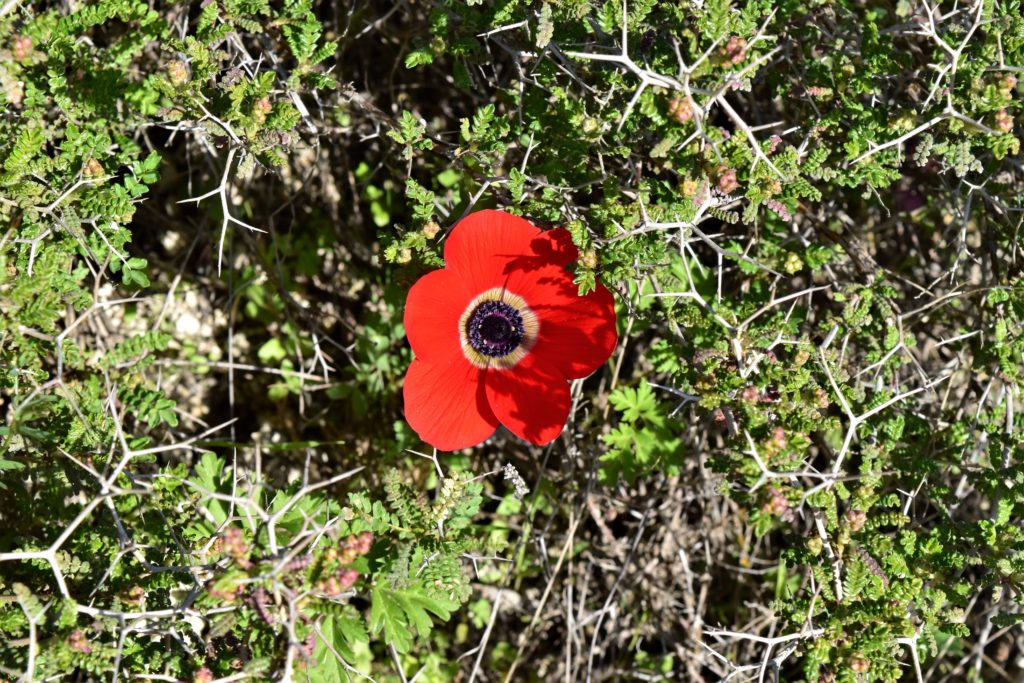