We’re offering three online classes in Jewish Meditation now! One Introductory, one Advanced, and one in Hebrew. To learn more about the classes and how to register, please use this link.

Last Shabbat, as we were leaving the house for a walk, we noticed a dead snake in the driveway. I’ll spare you the details, but it had been very expertly shechted and laid out, from head to tail – clearly the work of one of the feral cats that prowl our neighborhood. We appreciate their protection from the occasional snakes and scorpions, and we feed them appropriate table scraps. But it was Shabbat and the snake was muktzah, forbidden to touch on Shabbat, so I figured to dispose of it after Shabbat. But when I went after Shabbat to clean it up, we found it had been moved – and placed neatly on the welcome mat right outside our front door. We’ve come across instances of this before: house cats and even feral cats will present their adopted humans with hunting trophies. The veterinary sites say that these gifts can have several meanings: a token of thanks for feeding; letting us know that they are earning their keep; and a trade of food for more food. We appreciated the gesture, though it was not a hekhsher we hold by. But it’s the thought that counts.

People are accustomed to communicating with pets. One of the horses that grazes in the pasture next door sometimes comes up to me when we take a walk and nuzzles my hand, clearly looking for a handout. I’ve also experienced this kind of clear and intentional communication in the wild. Many years ago my sons and I were hiking one of the peaks in the White Mountains of New Hampshire, and after several hours the three of us sat down on a log for a snack, and pulled out granola bars. As I started to eat, a gray jay fluttered down and sat on the log right next to me, just a foot away. Gray jays are known to be comfortable around humans, so there we were, the four of us sitting together. I took a bite of the bar. The jay hopped down to the ground, plucked a white mushroom in its beak, hopped back on the log and laid the mushroom down right next to me, and cocked his head looking up at me. It was obvious that he was making an intentional trade. I broke off a piece of the granola bar and laid it on the log next to him. He picked it up and flew off. Our world is a vast network of communication, through and through. Our job is to listen carefully and multidimensionally.

And this is one of the core themes of Parashat Bechukotai. The blessings and, Heaven forbid, curses described at length are conditional on “listening”:

If you do not listen to Me and you do not do according to all these mitzvot.

It is intended to awaken the sleeping heart, for every person who goes in a path that is not good certainly is lacking in knowledge of the Creator, blessed be He, and His goodness… and this is what HaShem alerts us to in His saying “if you do not listen to Me,” in the sense of understand Me, then I am worried that you will not do all the mitzvot. But if you understand and know Me there is no worry, and this is the saying of the prophet (Isaiah 5:15): “therefore My people were exiled from lack of knowledge.”

Learning to listen in the sense of giving thoughtful attention to understanding the ways of God is one of the most essential skills of Torah. It requires serious Torah study to understand our full responsibility in this world, in all its nuance and complexity. But it also requires applying our Torah knowledge in paying attention and understanding the real world and what HaShem is asking of us at every moment. Maimonides, in his discussion of divine Providence, sums it up this way:

Men of excellence and knowledge have grasped and understood the wisdom manifest in that which exists, as David has set forth, saying “All the paths of HaShem are mercy and truth for those who keep His covenant and His testimonies  (Ps. 25:10).” By this he says that those who keep to the nature of that which exists, keep the commandments of the Torah, and know the purposes of both, apprehend clearly the excellency and the true reality of the whole (Guide of the Perplexed, 3:12).

Maimonides insists throughout the Guide that to really fulfill HaShem’s Will as outlined in the full Torah tradition you need to be attentive, to know the real nature of the world that God has created and directs, and how to apply the commandments of Torah in the real world.

One of the core teachings of the Ba’al Shem Tov, brought by his student colleague Rebbe Dov Baer of Mezritch, is learning to listen to HaShem, Who is constantly communicating with us through everything we experience:

The rule of the matter is that all that a person sees and hears and all that happens to a person, it all comes to awaken him, whether it be an issue of love, or fear, or harmony or initiative or thankfulness or connection or governance. These can occur in two ways. It can come to him in the midst of prayer, in the form of negative actions that one has done in the past that come before him in his thought, in order that he fix them and elevate them. And this is like someone looking in a mirror and seeing this own reflection in front of him – this is how his actions come to him in thought… And also at every moment, sometimes a person feels a pang of fear from something, or from some creature, everything comes to him in order to be elevated… This is the rule: all one’s actions should be in adherence to HaShem, blessed be He, and one should pay attention to everything, everything you see and hear, and all the more so everything you do, and this is what is said about King Solomon, peace be upon him, that “he spoke of the trees, from the cedar of Lebanon to the hyssop that comes out of the wall, he spoke also of beasts and birds and creeping things… (1 Kings 5:13),”  that everything he saw he spoke about everything as providing insights leading to service of God, blessed be He (Likkutei Amarim, 28).

The Maggid transmits a profound spiritual vision, that the whole world and all our experiences in the world are a conversation with HaShem. If we are sensitive and thoughtful, we learn and receive guidance from every event, every encounter, all the time. His list of issues – love, fear, harmony, etc., — are based on the qualities of the Sefirot in order from Chesed to Malkhut. In other words, if we analyze the inner quality of every experience we can discern the aspect of divine revelation that is being conveyed to us. In this way, our entire life is a continual conversation with God.

Interpreting HaShem’s real messages takes discernment and insight and a mature sense of reality. It’s not about reading “simanim,” projecting symbolic signs and oracles onto events, a superstitious practice prohibited by the Torah. This is real, direct and heartfelt communication.

For instance, if certain behaviors are leading consistently to illness and death, it’s a clear communication that there is something profoundly wrong with those behaviors and what motivates them. Illness such as the kind the world is struggling with right now, fever and respiratory disease, is listed as the very first punishment in the parashah. In the present world crisis, the fact that some haredi communities in Israel, the United States and Europe have suffered inordinate numbers of cases of illness and death is a direct communication that means something is seriously wrong with their behavior and their thinking. All kinds of rationales have been suggested by haredi leaders. But all these rationales conveniently avoid the real reason they are suffering illness and death more than others. The prophet Malakhi, commenting on the punishment of Israel in his own time, (1:9) says:

This comes from your own hand.

This week, when groups in Mea Shearim and Ramat Beit Shemesh and other locales in Israel and around the world defied well-meaning government restrictions on large bonfire gatherings for the yahrzeit of Rabbi Shimon bar Yochai on Lag BaOmer, it’s clear this is not from lack of information. This is from living in a fantasy world of compulsive habits and the inability to read and understand reality, compounded by a limited understanding of Torah itself. Rabbi Shimon bar Yochai stands for deep and constant Torah learning. When his life was threatened by the Romans he did not pretend God would protect him because of his Torah learning – he practiced social distancing and hid in a cave and learned there with his son for thirteen years. And in the present situation there’s no question that he would wonder why fools are “forsaking eternal life for transient life (Shabbat 32b),” dancing crowded around a bonfire, endangering their lives and the lives of others for a symbol of Torah, when they should be sitting and learning Torah itself. This problem goes deeper than misbehavior — it goes to the heart of the ideology that could spawn such behavior. It’s time for deep listening to HaShem.

Those who are misbehaving are relatively small groups in the overall haredi community. There are plenty of secular Jews not following the wise health directives of the government, but they are not representing Torah. It’s the responsibility of the rest of the community, especially their leadership, and all who respect and represent Torah, to step up more resolutely to provide constructive criticism for this desecration of Torah, this Hillul HaShem. This epidemic is a watershed event in human history – and we need to listen and listen well.

Many years ago I was standing at a red light on Rechov Yafo in Jerusalem, waiting with a bunch of people to cross the street. It was a long light. I looked both ways and there was no traffic and I started to cross the street against the light. I heard someone behind me call out “Rabbi!” It was a policewoman. She approached me and said “You are a Rabbi – I can see by the way you are dressed. People look to you and follow your example. If you cross the street against a red light, they will follow you and you will endanger their lives.” She said it with kindness and sincerity. It was the best tokhachah, constructive criticism, I have ever received. I said “thank you. You are absolutely right.” Since that time I do not cross a street against a red light.

It’s thoughtfulness that counts, thoughtfulness that guides caring, careful, responsible action. This week’s parashah is ultimately a parashah of blessing. If we follow the laws of Torah thoughtfully, observe the Mitzvot properly and work hard to understand and fulfill them in truth, we are promised abundant blessings, and God’s own commitment:

And I will walk among you and I will be your God and you will be My people. 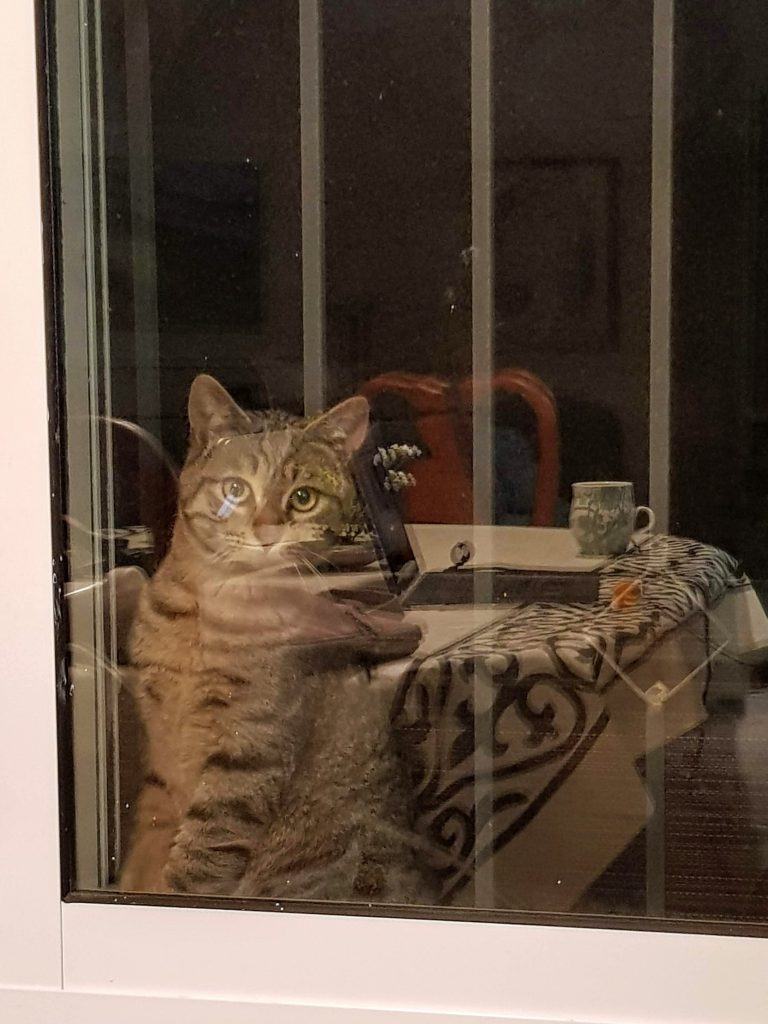 One of our neighborhood guards on our windowsill 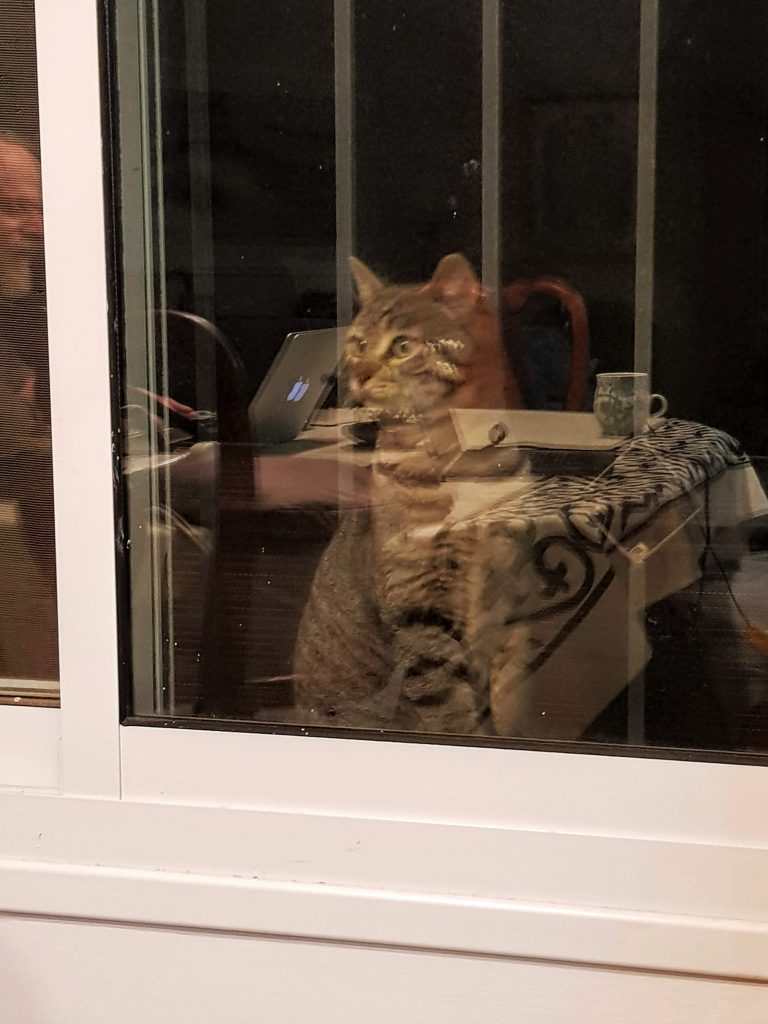