Israel mourns the murders of Kim Levengrond-Yehezkel and Ziv Hajbi, shot on Monday by a Palestinian in a terror attack at a factory in an industrial park near Ariel. Kim was a young wife and mother, Ziv a young husband and father, both were by all accounts warm, compassionate, thoughtful people. The factory and industrial park are known for working to promote peaceful coexistence among Israelis and Palestinians. This and other recent attacks have Israelis raising the question whether such coexistence is really possible given that the Palestinian political culture praises and rewards murder and their educational system and media glorify violence and indoctrinate children in terrorism against Israelis and Jews, encouraging attacks such as this.

Rabbi Moshe ben Nachman, the Ramban, on this week’s parashah explains the symbol of the rainbow as a sign of peace by relating it to a custom of warfare from his time:

For [God] did not place the bow such that its legs were above, appearing as if it was shooting from Heaven, “He sent forth His arrows and scattered them (Ps. 18:15) ” on the earth, but rather inverted it, to show that there is no shooting from Heaven. So, too, is the custom of warriors to reverse [the bow] in their hands when they call for peace to their opponent, and also that there is no string on which to nock the arrows.

The Ramban acknowledges that rainbows are natural phenomena caused by rays of sunlight shining through the moist atmosphere after a rain and splitting into a spectrum, so a rainbow is an appropriate sign of the end of rain. But he brings the warfare custom to explain that the rainbow here is to signify more than the end of a rainstorm – it’s to be a sign of the end of destructiveness in the world, a covenant of peace.

The whole reason for the catastrophic flood was because:

In the Gemara Sanhedrin (108a), Rabbi Yochanan appears to narrow the definition of hamas to robbery, and Rashi cites this in his Torah commentary. But Rabbi Hayyim Ibn Attar explains that Rabbi Yochanan’s point is to show that not only was the Generation of the Flood flagrantly violent in the most extreme and despicable ways, but violence permeated their whole way of life and all their relationships, down to violently grabbing even small items from each other in ways that made legal claims difficult and perverted even basic moral law. He anticipates the penetrating definition of violence framed by Emmanuel Levinas:

Violence is not to be found only in the collision of one billiard ball with another, or the storm that destroys a harvest, or the master who mistreats a slave, or a totalitarian State that vilifies is citizens, or the conquest and subjugation of men in war. Violence is to be found in any action in which one acts as if one were alone to act: as if the rest of the universe were there only to receive the action (Difficult Freedom p. 6)

Violence is any action imposed on others unilaterally. If Levinas were writing today his examples of violence would likely have included shouting down speakers or harassing students who disagree with leftist dogma and intersectionalist cant on college campuses.

The point is that the Generation of the Flood inundated the world with violence of every kind, violence saturated their culture at every level. This was why they were wiped out by the flood, and this is why God set the rainbow, the inverted bow, a symbol of peace, to be the guiding principle of the world from that time forth.

But even when peace is acknowledged as an ideal and political and religious leaders speak frequently of peace and arrange peace talks and U.N. conferences of all kinds, it’s not yet real peace. Rebbe Shaul Yedidiah Elazar Taub (1886–1947), the second Modzitzer Rebbe, escaped Poland in 1939, fled to Japan, then San Francisco and finally Brooklyn. In response to the peace negotiations going on between Germany and the other European nations in the run-up to World War II, the Rebbe quoted Tehillim:

I am peace, but when I speak, they are for war.

The Rebbe explains that when someone is truly for peace, they are peaceful, they are peace. A peaceful nation is one whose entire mode of conduct is peace: it does not glorify, incite and promote violence, its citizens live and act peacefully. But if there is a lot of talk about peace, while the nation promotes violence and encourages its citizens to violence, it’s a sign that war is imminent.

The Rebbe’s insight applied to Nazi Germany, and is just as applicable to Palestinian society today. There are certainly many peaceful Palestinians of good will, but Palestinian political culture, Hamas in Gaza and the Palestinian Authority in the West Bank, continue to whip up their constituencies to violence and indoctrinate their children in violence, and justify and glorify violence against Israelis and Jews. It’s not just that they don’t prepare their people for peace, quite the contrary, their culture of violence, even internally among and against each other, pushes away any possibility of peace.

Also this week Nikki Haley announced her resignation as U.S. Ambassador to the U.N.  We’ll miss her dearly. Her clear and true moral compass, her straight talk that cut through the nonsense and put the scoundrels and bullies of the U.N. and their masters in their place, her resolute action to remove support from the bad actors of the Middle East and the world at large, her firm rejection of the appeasement of tyranny – all this we will miss. We wish her great success on her path and we hope we’ll see her in political leadership real soon!

In our parashah HaShem designates the rainbow, the inverted bow, as the sign of the covenant of peace for humanity. The whole rest of the Tana”kh, and of human history to this day, shows that we have a lot of work yet to do together to realize our part of the deal.  May God comfort the families of kedoshim Kim Levengrond-Yehezkel and Ziv Hajbi among all mourners of Zion and of humanity, and help us to bring each other closer to the vision of the prophet Zekhariah as interpreted by Rabbi David Kimchi:

Rejoice greatly daughter of Zion and shout daughter of Jerusalem: behold your king comes to you, he is righteous and victorious, humble and riding upon a donkey and the foal of a donkey. I will cut off the chariot of Efraim and the horse of Jerusalem and cut off the bow of battle, and he shall persuade the nations to peace and his dominion shall be from sea to sea, from the river to the ends of the earth.

Speedily and in our days. 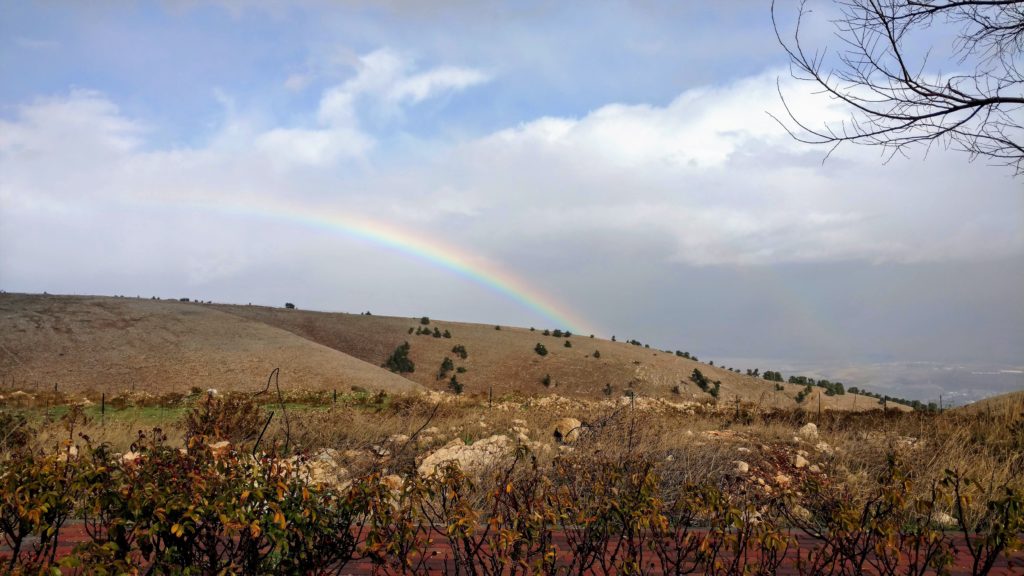