Assured is the person You chastise, God, and from Your Torah You teach him (Ps. 94:12)

Many years back we were in Israel visiting family, and spent an afternoon in Jerusalem with our son Noam, who was studying in Yeshivah. It was getting close to sunset, so Noam and I ducked into an Edot HaMizrach synagogue in an alley to catch the Minchah prayer. We were the first to arrive. The elderly gabbai welcomed us and assured us a minyan would gather shortly. We sat down and learned a little. At one point the gabbai noticed that Noam was sitting relaxed, with his legs crossed, and he came over and said, gently: “you know, it’s prohibited to sit with your legs crossed in a Beit HaKnesset, it’s a matter of kevod Beit HaKnesset – the respect that is due to a synagogue, which is a place of holiness.” Noam uncrossed his legs right away. Then the gabbai put his hand on Noam’s shoulder and said: “I just gave you a little criticism. Are you okay with that? I did not want to embarrass you, just to let you know the halakhah. Are you okay?”  Noam said he was fine with it and thanked the elderly man.

I have often thought back on this little story as exemplary, such a sweet moment of giving and receiving constructive criticism with good hearts, the way it should be done. Criticism, even well-meaning, comes with a bit of a sting to the ego of the receiver, and the Gabbai made sure that our son was handling it well – and his empathetic concern helped remove any discomfort.

In this time in which political discourse has become so coarse and crude, in which politicians and leaders claiming to represent Torah communities engage in vile name-calling and malicious public shaming, in this time of cancel culture and cruel crowd bullying at rallies and in social media, in this misguided culture – we need to remember the true Torah value of giving and receiving respectful, constructive criticism.

Proper criticism is a mitzvah of the Torah:

Do not hate your brother in your heart – you should chastise, indeed chastise your fellow citizen and not incur sin on his account (Lev. 19:17).

The Gemara and rabbinic commentaries discuss this mitzvah at length, providing wise guidelines for criticism that is effective and always respectful. To be able to air grievances so they don’t fester in the heart is vital for maintaining a healthy society, and it should be done in a way that is sensitive and thoughtful, in the spirit of helping each other continually improve ourselves morally and spiritually.

In this week’s parashah the tribes of Reuven, Gad and half of Menasheh see the land on the eastern side of the Jordan river, that Israel had just conquered from Aramean tribes that had attacked them, and decide that they would rather inherit this land instead of the portions they were supposed to get on the western side. We don’t blame them. This includes the area known today as the Golan Heights, and it’s gorgeous: thick forests and lush pastureland, rushing rivers, waterfalls and lakes, a row of extinct volcanoes along the eastern border, and all presided over by the spectacular Mount Hermon range to the north, a cluster of mountains with elevations up to 2814 meters (9232 feet). Not only is the Golan Heights beautiful and fertile, but it’s strategic, a high plateau that rises a bit from the Syrian border to the east and protects Israel, then and now, from vicious, violent nations.

The tribes of Reuven and Gad, blessed with abundant flocks that could make good use of the rich pastureland, petition Moshe Rabbenu to receive this area east of the Jordan as their inheritance, instead of what was intended for them to the west. Moshe reacts with alarm. He chastises them at great length, in tough terms, reminding them of the debacle of the spies who had discouraged Am Yisrael from entering and taking possession of the Land of Israel, dooming a whole generation to die off in the wilderness while wandering for thirty-eight years. He accuses them of taking an easy way out for themselves while the rest of the nation needs to struggle and fight their way against the Canaanites, and warns them that if they don’t join in the conquest of the Land the rest of the nation will be disheartened and endangered. And he adds: “And now you have risen up following your ancestors, a culture of sinners, to increase anger of HaShem towards Israel. If you turn aside from following Him, and He will leave them again in the wilderness, you will destroy this people (Num. 32:6-15).”

The criticism is tough but honest. To settle the crisis the men of the tribes of Reuven, Gad, and Menashe offer to leave their families and flocks on the eastern side of the Jordan river, and lead the Israelite army in the conquest of the Land of Israel, and only when the conquest is complete to return to their new homes. It’s a good solution of courageous people, so why didn’t they offer it from the start, or at least once they saw that Moshe was alarmed. Why did they let Moshe chastise them at length with a rebuke that gets immortalized in the Torah?

Rabbi Yehudah Aryeh Leib Alter of Gur, when he was still a young man learning in Yeshivah, used this passage in the parashah to explain to his study partner an incident that involved them both. They were both studious and diligent students, accustomed to putting in long hours of study, day and night. Once, they stayed up all night together learning with intensity, and the next morning they tried to sleep in a bit. But Yehudah’s grandfather, the great Rebbe Yaakov Meir Alter of Gur, noticed Yehudah’s absence at the early study period and came to his room to chastise him at length for being lax in his studies. Yehudah listened in silence and rapt attention to his grandfather and did not interrupt him. When his grandfather left the room, Yehudah’s study partner asked him “why were you silent, why didn’t you explain that we were up all night studying?” Yehudah explained: “I didn’t want to interrupt my grandfather, because I wanted to hear from him even more criticism.” He opened up the Chumash and showed his study partner the passage in parashat Matot: “Look, the tribes of Reuven, Gad and Menashe, when they first approached Moshe Rabbenu, had already intended to lead Israel in the conquest from start to finish. But when Moshe began his words of criticism they did not want to interrupt the Torah of Moshe Rabbenu to explain themselves, they wanted to hear from him even more words of criticism and moral teaching.”

His point is that in authentic Torah society criticism that is constructive, given in the sincere spirit of helping the other person to improve, is precious, and a morally healthy person welcomes such criticism. It says in Proverbs (9:8):” הוֹכַ֥ח לְ֝חָכָ֗ם וְיֶאֱהָבֶֽךָּ: — criticize a wise person and he will love you.” In truth, the ability to give criticism constructively and considerately and receive criticism with maturity is one of the great keys to the multi-millennial survival of the Jewish people. Through this honest process we have been able to help each other learn from our mistakes and correct course.

Traditionally, we have also applied this skill to understanding history and the events that occur to us as a nation. Crises are also a form of criticism, criticism from Heaven, and the Torah approach to a crisis is to take responsibility for it and analyze our role in bringing it on ourselves. The Gemara and commentators are emphatic that the destructions of the First and Second Temples, that we commemorate during this season, are understood to have been brought about by our own negative behavior, tearing apart the spiritual and social cohesion of Am Yisrael, rendering us vulnerable to attack. If we understand realistically and insightfully how we got ourselves into a crisis, we can better figure how to navigate it, escape it and avoid similar situations in the future. Cultures in which people are unable to accept responsibility for mistakes and habitually shift blame to others, and there are quite a few such cultures around us, are doomed to stagnation and decay.

We are family, the Israel family and the human family, and our goal should always be to help each other and to strengthen each other, and constructive criticism, given respectfully and accepted graciously, is an important part of that help.

I thanked the elderly gabbai of that Beit HaKnesset for his kindness and thoughtfulness — for the lesson in respect for a synagogue, and for the lesson in how to give proper criticism, and I let my son know I was proud of him for his mature response. And since that time, when I find myself inadvertently crossing my legs in a Beit HaKnesset, I immediately uncross them and smile with warm remembrance of that precious human moment. 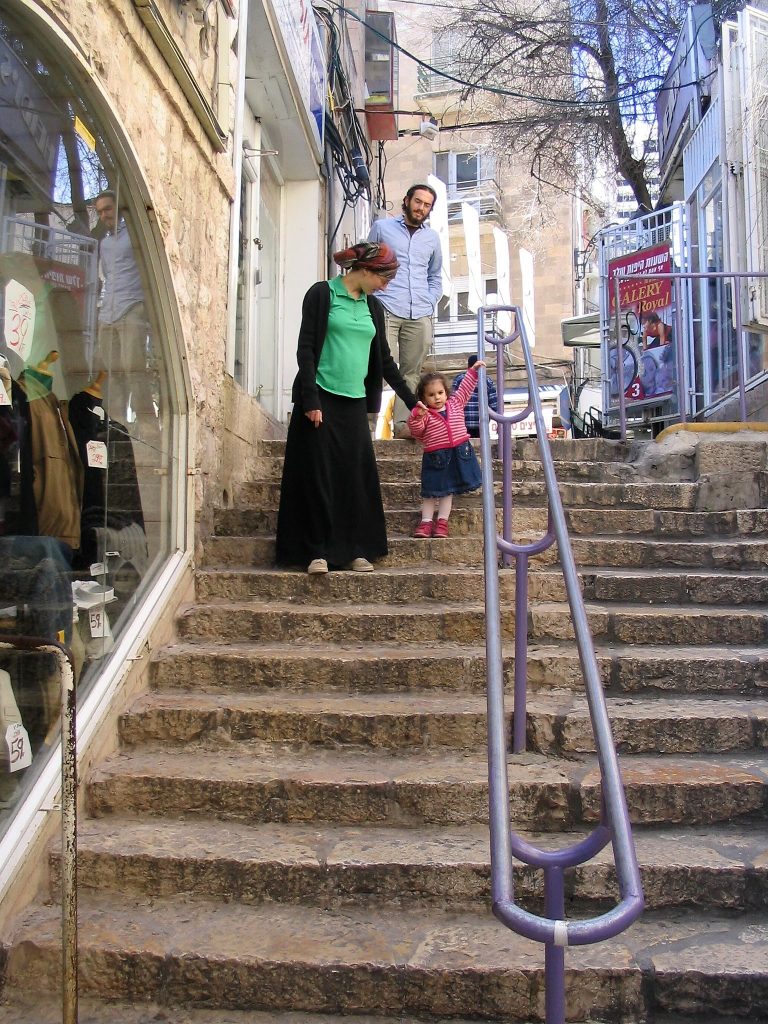