Last week we got together with family for an outing before the grandchildren return to school in this challenging time of pandemic. We met at one of the national archeological parks that we figured would not be too crowded – a place called Apollonia in Herzliya. It had been a coastal settlement on a cliff overlooking the Mediterranean. Evidence of sustained habitation begins from the early Second Temple period, succeeded by Hellenists, Romans, Byzantines, Persians, Samaritans, Muslims and then by the Crusaders from 1102. It changed hands back and forth between Crusaders and Muslims over a century and a half. The site features the extensive ruins of a Crusader castle built in 1241 that was finally conquered and destroyed by the Muslims in 1265 and that was the end of it – until the ruins were included as a national park in the town limits of Herzliya.

As our grandchildren explored and romped merrily among the remains of the castle I recalled a poem by Rabbi Shmuel HaNagid, the 11th century Talmudic scholar and first great Hebrew poet of the Golden Age of Spain. He also became a vizier and victorious general of the Muslim kingdom of Granada, and his poetic diwan includes unique autobiographical accounts of life on the battlefield. Among his poems is a moving meditation on spending the night in the ruins of a castle with his troops on the eve of a battle, thinking of the violence that had occurred on that spot generation after generation, and that was about to occur the next morning. His poem captures some of the underlying irony and poignancy of our experience as well. We were visiting this archeological site in Israel as a fun vacation activity on a sunny summer’s day. But the ruined castle is a remnant of great trauma that occurred in our Land. The Crusaders from Europe challenged the Muslims for control of the Holy Land, but on the way to the Holy Land and in the Holy Land they also massacred Jewish communities barbarically. We can take some satisfaction that a vibrant Jewish state is here now and we can have a picnic on the grounds of this vestige of the defeat of the Crusaders. But it’s been a long and painful road to get here. Visiting the numerous archeological sites in Israel is a favorite pastime for Israelis as much as for tourists – but it’s important to take to heart that many of the archeological relics of our Land are remnants of painful events and terrible suffering. It’s by acknowledging past trauma and learning from the hard lessons of our history, our national and personal history, that we can free ourselves from the grip of those traumatic events and strengthen ourselves to face the challenges ahead.

This is one of the messages of our parashah, which includes Moshe Rabbenu’s list of blessings that will accrue to us if we follow the mitzvot of the Torah properly, but also the vivid, harrowing section of curses if we don’t, Heaven forbid. This section is an expanded version of a similar section that occurs in Parashat Behukotai. Moshe Rabbenu is warning us and wants us to wake up and understand clearly the consequences of our choices and actions. But Ashkenaz custom when reading the disturbing sections with the curses aloud in Shul is for the reader to lower his voice and read quickly, not to dwell on these curses so as not to bring them upon ourselves even in thought. And in Ashkenaz custom the official reader himself is the one called for this Aliyah – since he is considered protected from the threat of harm by his public service. This somewhat superstitious custom would seem to evade the purpose of this section, which is to face the warning and take it to heart, but we understand the concern.

Even so, there’s a story about Rabbi Nachum of Chernobyl that illustrates the real power of this reading. In his youth he had a weak constitution and was plagued with numerous health problems. One Shabbat he joined the minyan of the Ba’al Shem Tov. It was the Shabbat on which one of the passages of rebuke is read, and the Ba’al Shem Tov himself was the Torah reader. Deviating from custom, Rabbi Nachum was called up for the Aliyah of the curses. Rabbi Nachum was upset that this Aliyah, of all things, fell to him. But when the Ba’al Shem Tov began to read, Rabbi Nachum began to feel pain leave each one of his limbs with each successive reading of the passage of rebuke, and when the reading was over, he was healthy and whole – and he went on to become one of the Ba’al Shem Tov’s most ardent followers and a great Rebbe in his own right. The point of the story is that facing the hard realities is the best way to overcome them.

And this is the essential principle of this season of Teshuvah as we prepare for Rosh HaShanah and Yom Kippur. Rabbi Yehudah Aryeh Leib Alter of Gur, in his Sefat Emet, notes that though this is a season of divine judgment, in which each of us realizes that we stand before God to be examined in detail, we welcome this judgment and work on examining and improving ourselves morally and spiritually. He says “each Israelite person should understand and comprehend that great is the virtue of being remembered by the Creator, blessed be He, Who is the Father of Mercy, and is it worth it to be judged just so we can be acknowledged by Him, blessed be He.” He adds that in this way, by facing and accepting God’s judgment and learning from it, we turn judgment to mercy, and this is the real meaning of the midrashic theme that on Rosh HaShanah God shifts, so to speak, from His Throne of Judgment to the His Throne of Mercy (Rosh HaShanah 5639).

By facing our hard knocks and learning from them, we gain real inner strength. This honesty and sense of responsibility and ability to learn from our mistakes has been the real secret of our survival as a nation, against those who “in every generation rise up against us.” We still have a long way to go – we are challenged now and struggling against the pandemic, against implacable enemies, and against dangerous loss of moral and halakhic compass within our society on the part of some misguided religious and hedonist secular groups. But watching our grandchildren play amidst the ruined walls and gates of a Crusader castle can give us a sense of hope and of courage. We’re still standing, we will keep on facing and learning from our mistakes and our challenges and, with HaShem’s help, make it through to the time prophesied by Yeshayahu in this week’s haftarah:

No longer will violence be heard in your Land, wasting nor destruction within your borders, and you shall call your walls Salvation and your gates Praise. 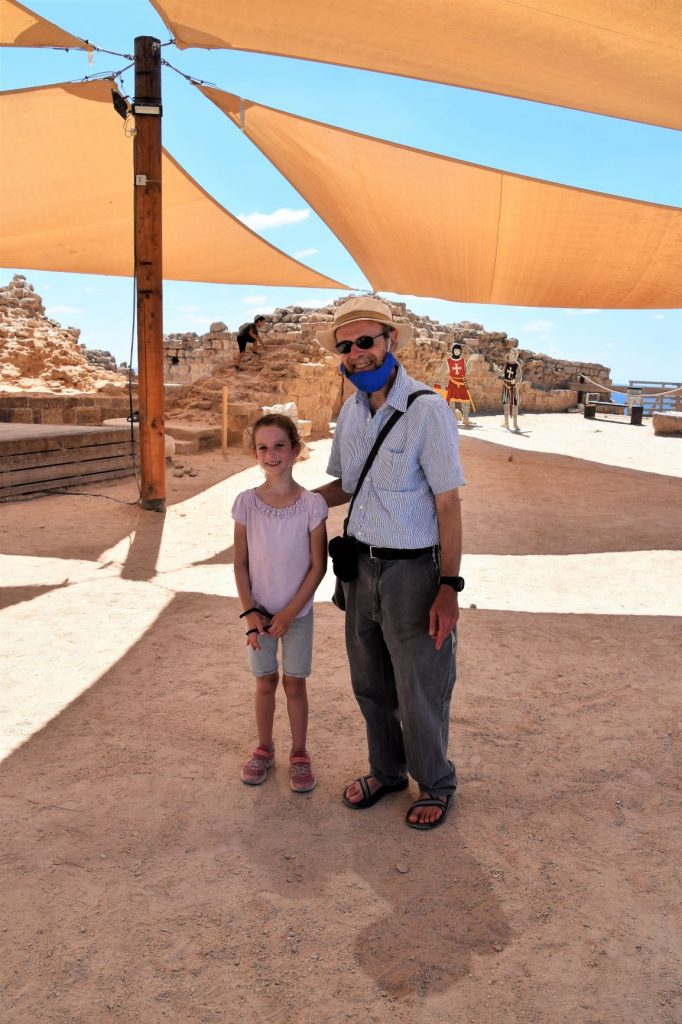 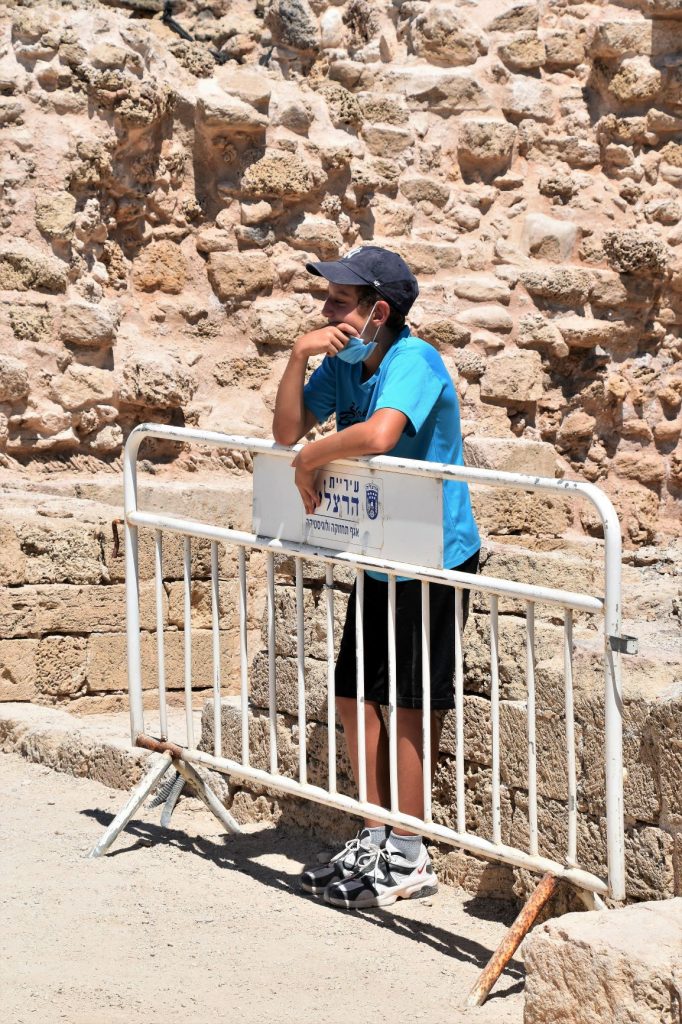 Our grandson reenacting the famous pose of Theodor Herzl along the railing, as we were in Herzliya. His right hand is portraying Herzl’s beard.