For more information, please click on Classes and Events here

This is high season at Livnot U’Lehibanot, when various groups of students from the Anglo world with little or no Jewish background come to spend a few hours, a few days or a few weeks with us getting a taste of Jewish life in Israel. I was never a fan of paternalistic “kiruv,” but Livnot’s approach is open and respectful of the integrity of the individual, offering the resources of our heritage, our culture and our Land without agenda and without a sales pitch.

But we are teachers here at Livnot, and the role of a teacher is to help students expand their minds. So I was interested to hear some of our students this week discussing the experiences they had been having and rating them as to whether they were inside or outside their comfort zone. I thought of a conversation I had with a colleague, a master teacher, about the quality of college students coming to Israel for Torah studies programs these days. He said that at the beginning of a program he had posted the daily schedule on a bulletin board: times for tefillah, times for classes, times for meals. Later that day a new student came up to him and complained, saying “I feel coerced.” He had no idea what the student was talking about. “What do you mean ‘coerced’?” “I feel coerced by that schedule on the bulletin board.” The teacher still had no idea. The student explained: “when you put up that schedule, it implies that I have to follow it. It makes me feel coerced and unsafe.” The teacher was speechless, and too much a professional to put the spoiled brat in his place. But to me he wondered what in the world is going on in American academia these days? Hyper-correctness has taken over, with its hypocritical hypersensitivities to imagined micro-aggressions of all kinds. The result is a generation of students with micro-thin skins, lost in relativism without a moral compass, vulnerable to manipulation. There are real aggressions going on in this world, but they can’t see the forest for the trees.

The craft of teaching is delicate. Teaching Torah is not just saying Torah. In true teaching we are constantly assessing the abilities of our students to absorb the learning, offering a structure of coherence and expanding incrementally. The teacher’s job is to challenge and stretch, but without violence. Jewish psychologists Lev Vygotsky and Jerome Bruner examined how effective teachers provide a structure of meaning, “scaffolding,” tailored to the individual student, upon which the teacher builds to help expand and stretch the student’s understanding and competence with new insights.

There is a great teachable moment in this week’s Torah portion. In anticipation of entering the Land of Israel, Moshe lays out the rules of inheritance of land according to tribes and paternal houses following male lineage.  He is teaching Eleazar Ha-Kohen, the heads of the tribes and the gathered congregation at the Tent of Meeting. Suddenly the daughters of Tzlofhad approach and respectfully submit a complaint. They explain that there are five daughters in their family, no sons, and their father has died:

Why should the name of our father be diminished in the midst of his family just because he has no son? Grant us an inheritance among the brothers of our father.

Moshe had just finished expounding the laws of inheritance as a neat package of male prerogative, and did not know the answer to the out-of-the-box question posed by these righteous women, so he submits their question to HaShem. God supports the claim of the daughters of Tzlofhad:

Rashi comments on the basis of the Aramaic translation: “Correct. This is how the paragraph is written before Me in Heaven,” saying that the eyes of [the daughters] saw what Moshe’s eye did not see… They claimed correctly. Fortunate is the person with whose words the Holy One, blessed be He, agrees.”

This is one of four laws that came before Moshe the Prophet and he decided them by the Mind of the Supernal… In all cases Moshe admitted “I have not heard,” in order to teach the heads of the Sanhedrin of Israel that will arise in the future after him… to not be embarrassed to ask concerning a law that is difficult for them. For Moshe, the teacher of Israel, needed to say “I have not heard,” and therefore Moshe brought their case before HaShem.

In each of the four cases that appear in the Torah, Moshe admits he does not know the answer based on his current understanding of the halakhic system and submits the questions to God. In each case God provides or confirms a new law that was always there, “written before Me in heaven,” but not originally obvious. These cases stand as a precedent for the vital halakhic category of chiddushei Torah, Torah novellae, innovative ideas as an integral and highly-prized part of the living system of halakhah.

Rabbi Menachem ha-Meiri, in his introduction to his magnum opus Beit ha-Behirah, addresses the question of how the eternal Torah can admit new halakhic insights. He brings an example from the Gemara Hullin 7a in which the great Rabbi Yehudah haNasi decides a halakhic ruling in a new way and is challenged by members of his own family for daring to innovate. He defends himself with the example of King Hizkiyahu, whose illustrious ancestors King Assa and King Yehoshafat were scrupulous in uprooting idolatry from the Land yet left him room to make his own contribution by uprooting a ritual object that had become an idol in his time. So, too, in halakhah, Rabbi Yehudah’s predecessors left room for him to contribute his own creative rulings. The Meiri provides a theoretical scaffolding for the principle of halakhic innovation:

HaMeiri’s point is that Torah law is eternally whole, yet admits innovation. Innovations in halakhah are not to be understood as progress, improving on the past. In fact, the moral and spiritual character of the generations is in decline. Rather, each successive generation has different challenges and different needs that prompt its scholars and leaders to search for new solutions in the eternal Torah. Those solutions were always implicit, but not recognized earlier because not needed. The laws of inheritance in the Land of Israel were not relevant until Bnei Yisrael were about to enter the Land, and the circumstance of a family with daughters and no sons prompted a deeper inquiry into the eternal Torah for an answer that was hidden there all along.

In Torah learning and all learning, change is incremental, a process of constructing a scaffold of meaning that can provide a stable launch pad for new understanding and new insight. The student apprentices him or herself to the tradition, and once they master it, they earn the ability to discover its creative dimension. It’s like jazz improvisation – the delight of new phrasings comes from masterfully working off and around the established structure of the song.

So I appreciate our Livnot students’ assessment of what is and is not in their comfort zone, as long as they stay open to what is new and perhaps out of their zone. Our job as teachers is to encourage them in this process. To their credit, the very fact they are here in Israel means they have left their familiar culture and opened themselves to adventures of the spirit – not unlike their great ancestors, the courageous men and women of Am Yisrael on their way to Eretz Yisrael. 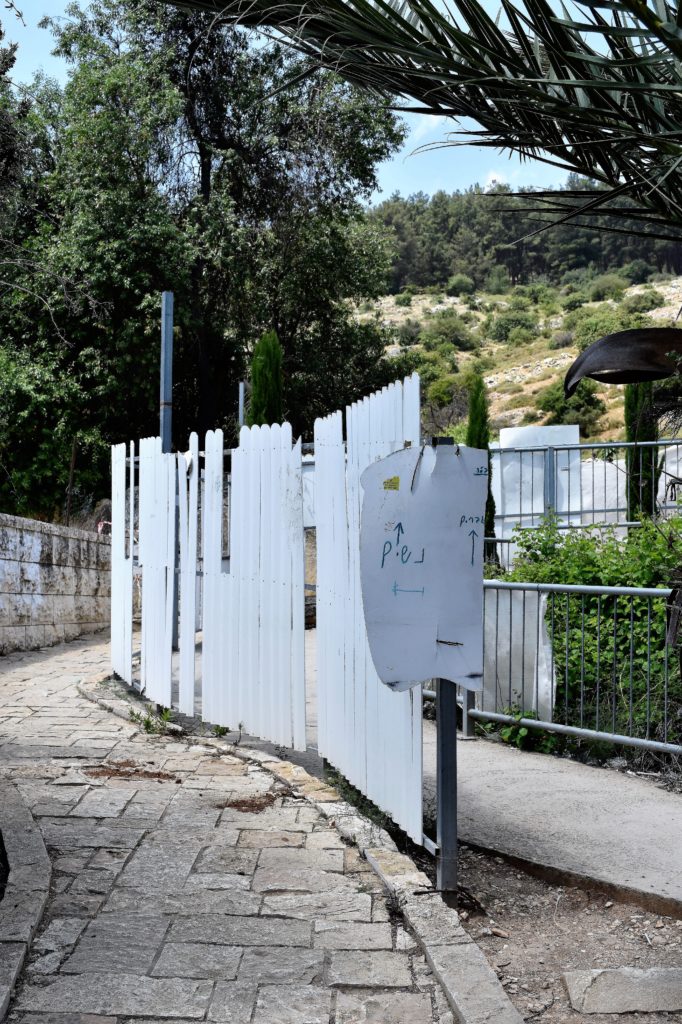 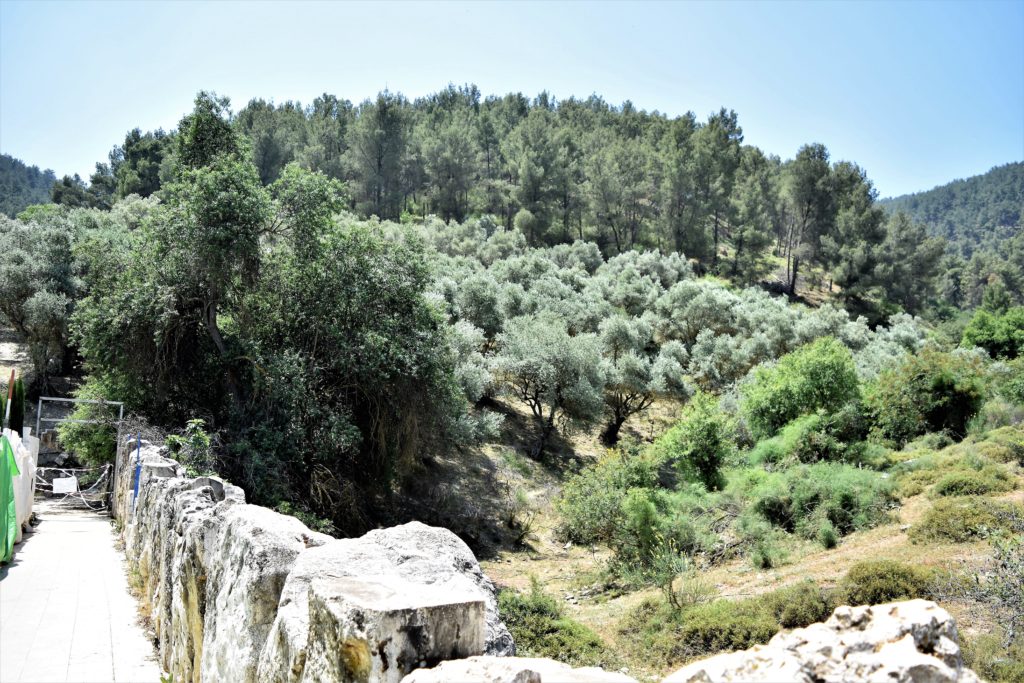 Looking past the walkway in Amuka 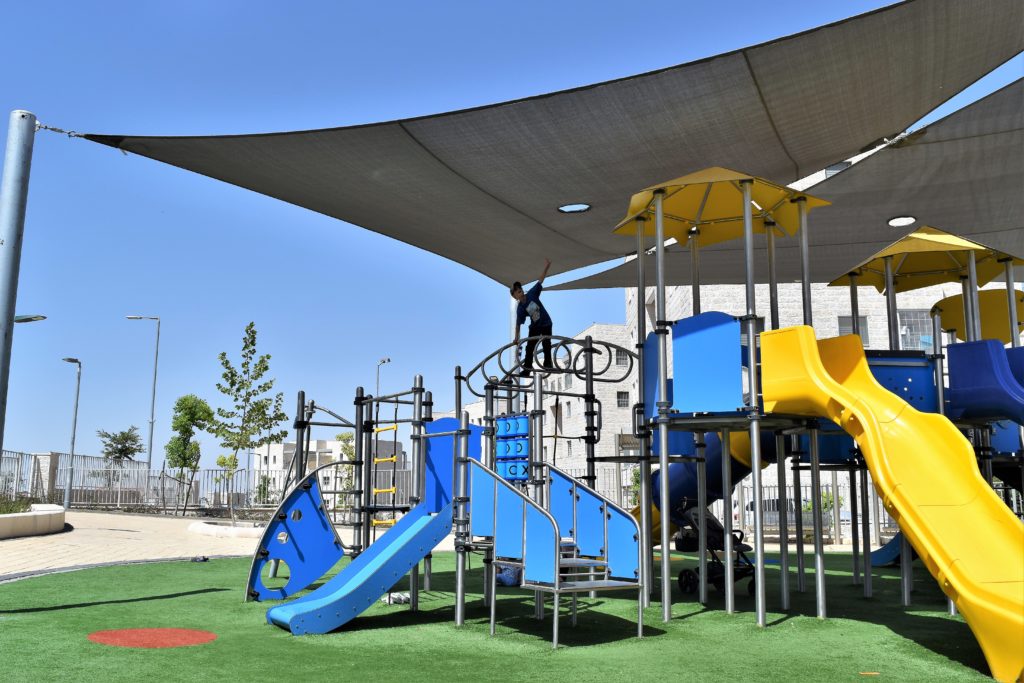 Scaffolding at its best