We subscribe to Ulpan La-Inyan, an organization that, along with its online Hebrew instruction programs, sends a daily email with a word or phrase in Hebrew that’s used idiomatically in colloquial speech. This week we got:

“to shuffle the deck [of cards]” is לטרוף את הקלפים. For example: “ואז הגיעה הקורונה וטרפה את הקלפים – And then came corona and shuffled the deck.”

So this phrase conveys the idea of mixing things up in an unexpected way, as the pandemic has done to our lives. But there are several idioms operating here with a clever connection to Torah tradition. To shuffle cards comes from the culture of gambling, and in more general British idiomatic usage “to shuffle the cards” can mean to mix things up to create new opportunities. But the phrase in Hebrew is using an unusual verb, which does not correspond to interweaving playing cards to create random order. The note from Ulpan La-Inyan continues:

The Hebrew word root ט.ר.פ has meant several things over the millennia, from tearing (טריפה – “treif” – an animal whose lung is torn) and devouring (לטרוף – to devour) to craziness (טירוף) and scrambling (ביצה טרופה – scrambled egg).

But they don’t explain how this verb got connected to shuffling cards. The answer is in the Mishnah.

Generally speaking, the traditional Torah view of divine Providence is that nothing occurs in this world by chance. This is part of the rationale given by some observant Jews for the rejection of Darwin’s theory of Natural Selection, typically explained as based on random mutation, from which those mutations most fit for their environment survive. But it happens that one of the holiest moments of the holiest day of the Jewish Year in the time of the Holy Temple involved what seems like a moment of chance. On Yom Kippur, at a climactic point in the Temple service, a pair of nearly identical goats are brought before the Kohen Gadol for sacrifice. One goat will be dedicated to HaShem, to be offered on the altar of the Temple and its blood brought in to the Holy of Holies to be sprinkled on the Holy Ark. The other goat will be sent out into the wilderness and rolled off a cliff to Azazel, essentially a gift to the prosecuting spirit. To decide which goat goes where, the Kohen Gadol is presented with a wooden box, called a Kalpi (קלפי ), in which are two lots, originally two wooden tiles, as used in games of chance. The Mishnah says:

The Gemara explains that the two goats are placed to the right and left of the Kohen Gadol. He grabs the two lots from the box, one in each hand, and whichever lot is in his right hand is applied to the goat to his right, left to the left. As Rashi explains it, the phrase  טרף בקלפי  means he is required to seize the lots in the box quickly and without looking, to make sure that he does not influence the choice of which hand picks up the lot marked “To HaShem.” The concern was that it was considered a good sign if that lot ended up in his right hand for the goat to his right — but that good sign was not for a human being to influence. As Rabbi Menachem HaMeiri explains it, the phrase  טרף בקלפי  means the Kohen Gadol grabs and shakes the box to mix up the lots inside so he has no idea which is which. Either way, it seems that at the very heart of the holiest service of the holiest day of the year stands a moment of chance. But properly understood, it’s not a moment of chance, but a moment from which human will is excluded, so it’s clear that the choice is HaShem’s alone. (This understanding can be applied to genetic mutations as well.)

So the phrase טרף בקלפי from the Mishnah, to seize or shake a box to allow a choice without human influence, gets applied, with a clever play on words, to shuffling a deck of cards –  לטרוף את הקלפים .

This phrase may also give us deeper insight into a phrase used in this week’s parashah. When the brothers sell Yosef, then dip his distinctive coat in goat’s blood and bring it to their father Yaakov, to imply that Yosef has been killed, Yaakov responds:

He recognized it and said “it’s the coat of my son. A wild animal has eaten him. Yosef has surely been ripped apart.”

Yaakov uses the same verb for ripping apart: טָרֹ֥ף טֹרַ֖ף. There’s a line of midrashic commentary that sees in this statement by Yaakov some intimations of prophetic awareness that Yosef was not literally killed, but that he was in a dangerously unstable situation. Rashi brings the midrash that the “wild animal” would be Potiphar’s wife who would try to seduce him. Similarly, some midrashim point out that טָרֹ֥ף טֹרַ֖ף יוֹסֵֽף can be understood figuratively – that Yosef’s life situation gets torn apart and mixed up repeatedly. But just as mixing up the lots as the Kohen Gadol puts his hands in the box reveals pure divine Will, and just as shuffling a deck of cards allows new combinations to emerge, so, too, the series of shake-ups in Yosef’s life in this week’s parashah, from pampered son to slave to prisoner, reveal God’s pure will and allow new and creative possibilities to emerge that guide Yosef to fulfill his destiny. Yosef responds to these extreme shake-ups in his life with resilience and adaptability, maintaining his balance and his core principles, and staying ready to seize opportunities when they present themselves.

This week we begin celebrating Hanukkah, commemorating the victory of the Hashmonaim over the oppressive Syrian Hellenists. Their God-guided victory also took advantage of the complex political and military situation of the time, a shuffled deck, with principled action, courage and adaptability.

These approaches to challenging times stand as a model for all of us during the multiple shake-ups we are all going through during this pandemic. We, too, need to find our resources of resilience, to adapt as necessary without stubborn rigidity, in a manner both flexible and principled. The deck has surely been shuffled, and God is the Dealer – who knows what possibilities can emerge? 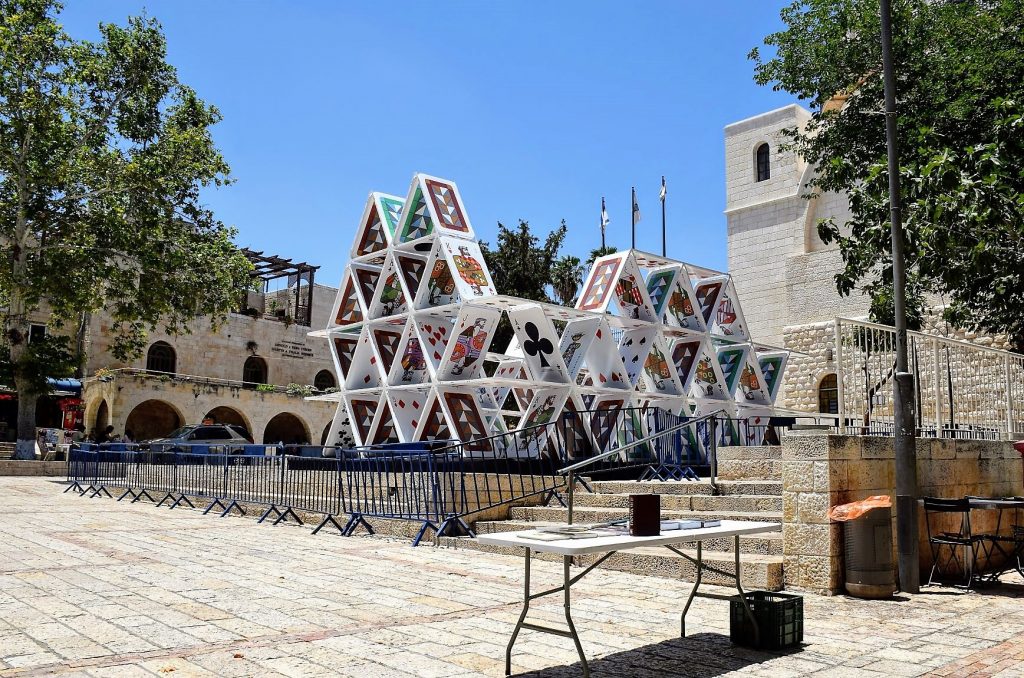