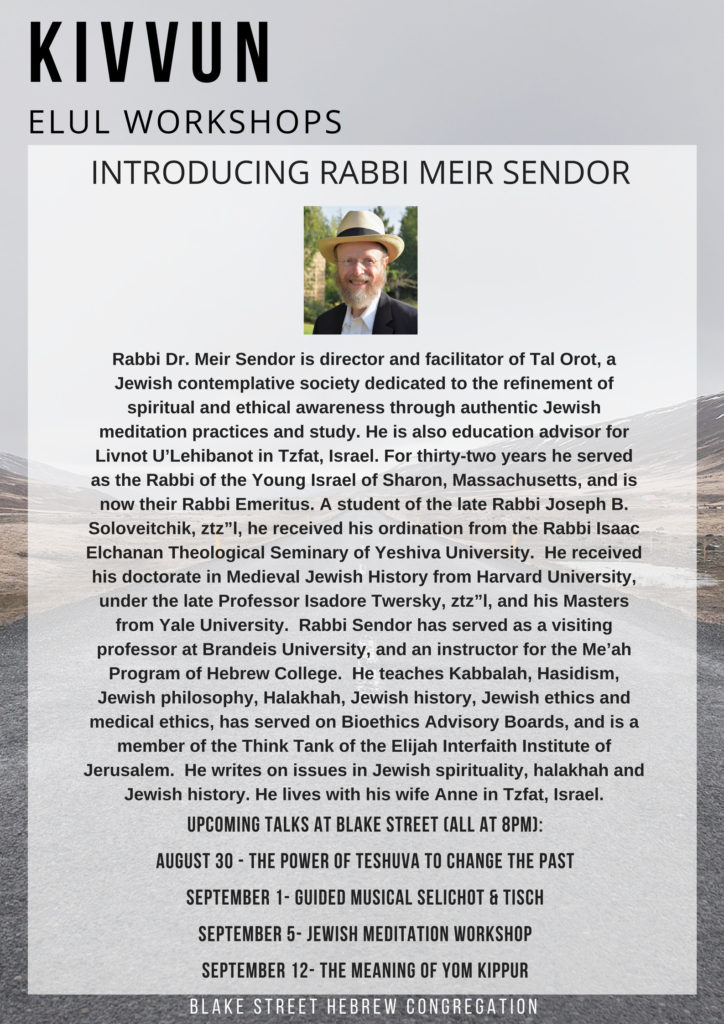 We’ve been trying to find the source of a mysterious leak in one of the rooms of our house for the better part of a year now. While most rooms of our home have simple concrete walls, typical construction around here, this room had fancy textured plasterboard overlaid on the concrete. The problem was that the plasterboard was damp and developed toxic mold – but it was not at all clear where the water was coming from. We probed, we brought in plumbers, roofers and water whisperers (yes, one guy said “I don’t use instruments, I just think like water and ask it where it’s coming from”), but could not figure it out. When I checked with the previous owners on the history of the wall and indicated we’re thinking of opening it up, turns out they had problems with it, too, and advised “don’t mess with it – you’re opening a can of worms.” Finally, this week, with the help of a real craftsman, we just faced into it, opened the can, and removed the wall entirely. It was a mess, but once it was cleared away we found the concrete wall behind it in good shape and dry, and we were able to get a good idea of the source of the leak – a crack in the roof – and address it.

This month of Elul, in preparation for Rosh HaShanah, is devoted to facing our problems – emotional, moral, spiritual, interpersonal, all our broken places – and working to repair them. This process is one of the secrets of the multi-millennial resilience of the Jewish people. By honestly acknowledging our failings and taking responsibility for them, we are able to work to continually improve ourselves and our society.

This stands in contrast to other cultures prevalent in the Middle East and on U.S. college campuses today. Sociologists Bradley Campbell and Jason Manning distinguish three types of moral cultures: dignity cultures, honor cultures and victim cultures. In dignity cultures, the individual feels he and she have inherent moral worth and take self-responsibility for mistakes. The insults and slights of others are regarded as superficial and can be brushed off, or handled without violence by due process of law if necessary. In honor cultures, one’s worth depends on one’s reputation, which is determined by others, so even small slights are avenged, even violently, and mistakes are blamed on others.

In a recent interview with Claire Lehmann of Quillette, Campbell and Manning described the third moral culture that has taken hold on many college campuses in the U.S.:

People in a victimhood culture are like the honorable in having a high sensitivity to slight. They’re quite touchy, and always vigilant for offenses. Insults are serious business, and even unintentional slights might provoke a severe conflict… They complain to the law, to the human resources department at their corporation, to the administration at their university, or — possibly as a strategy of getting attention from one of the former — to the public at large. The combination of high sensitivity with dependence on others encourages people to emphasize or exaggerate the severity of offenses. There’s a corresponding tendency to emphasize one’s degree of victimization, one’s vulnerability to harm, and one’s need for assistance and protection. People who air grievances are likely to appeal to such concepts as disadvantage, marginality, or trauma, while casting the conflict as a matter of oppression… We argue that victimhood culture, at least in its more extreme forms, is new. We see it in its purest form on contemporary college and university campuses. Manifestations of victimhood culture include complaining about and punishing microaggressions, demanding and creating safe spaces, requesting and requiring trigger warnings, and banning or disinviting speakers who might offend designated victim groups.

Victim and honor cultures shift blame to others, a tactic that lacks moral integrity and leads to weakness of character and cultural stagnation. By contrast, the principle at the heart of Torah is tikkun, taking responsibility for ourselves and others, being honest about our problems and mistakes and stepping up to repair them. This week’s parashah is a miscellany of mitzvot dealing largely with interpersonal relations, bein adam le-chavero, including the mitzvah to build a fence around the roof of your house:

When you build a new house you shall make a railing around the roof so you do not place blood on your house lest someone fall from it.

The rabbinic tradition qualifies the halakhic conditions that require such a railing: that it be a flat roof that people use, even occasionally, for household tasks or recreation; but for a slanted roof that no one stands on, or even a flat roof only accessed for repairs to the house, a railing is not considered obligatory. Generally speaking, when the Torah gives specific cases like this, the rabbinic tradition understands it as an example from everyday life meant to represent a principle extending to broad class of similar circumstances. In the Gemara Ketuvot, Rabbi Natan says:

It is taught: Rabbi Natan says, “from where [do we derive] that a person should not raise a bad dog in his home nor set up a rickety ladder in his home? As it says ‘do not place blood on your house.’”

Maimonides explains: “the same for a roof or for anything that has an element of danger from which a person can stumble and die… The Rabbis prohibited many things because they may endanger life, and anyone who transgresses and says ‘I will endanger myself, and what do others have to do with me and I don’t care’ receives [rabbinic punishment] (Mishneh Torah, Laws of Murder and Protection of Life, 11:4-5). The whole vision of Torah and its legal and moral system is of our interconnectedness and responsibility for ourselves and for others and our obligation to fix dangerous situations.

And sometimes the fixing requires breaking. In fact, according to Rabbi Dov Baer of Mezritch, based on the Torah of Rabbi Yitzhak Luria, z”l, all tikkun requires breaking in some way.  He says that just as a chick needs to break through the shell of the egg in order to grow, so, too, all changes and improvements and fixing in our lives require a breaking of some kind, passing through a stage called ‘Ayin, divine nothingness, in which all form is temporarily dissolved so that new, more enduring and more expansive forms can emerge.

The process of Teshuvah, repair of the soul, works in a similar way. Maimonides lays out the stages of Teshuvah: to acknowledge and abandon the sin, to resolve not to repeat it, to regret the past mistake, and to attain such a level of commitment that you can engage God Himself to testify that you will never again make this mistake (Hilkhot Teshuvah 2:2).  Rabbenu Yonah zeroes in on the regret: it’s a stage we pass through in which we feel the emotional cost of our mistakes, a stage of bitterness, pain and anguish (Sha’arei Teshuvah 1:12). In this passage we take ourselves apart emotionally and really break down our old ways of acting and reacting. Rabbi Yitzchak Blazer, one of the early leaders of the Mussar movement, says that it is this passage through emotional breaking of regret that allows us to make real change in our behavior and attain that elevated state in which God Himself recognizes our sincere bitterness of heart and testifies that we have changed. This breaking can be a scary experience, but it helps us release from the negative patterns and build ourselves anew on a stronger and more expansive foundation.

And so, with some trepidation, we took apart a damaged and dangerous wall, cleared away the debris, and found a good, solid structure underneath that we could start from to renovate our room. Not a bad job for the month of Elul. May we all clear away dangerous and toxic walls of all kinds and find our underlying sources of healthy resilience, to be ready to receive the blessings of the New Year.

Just one year ago, we painted this wall 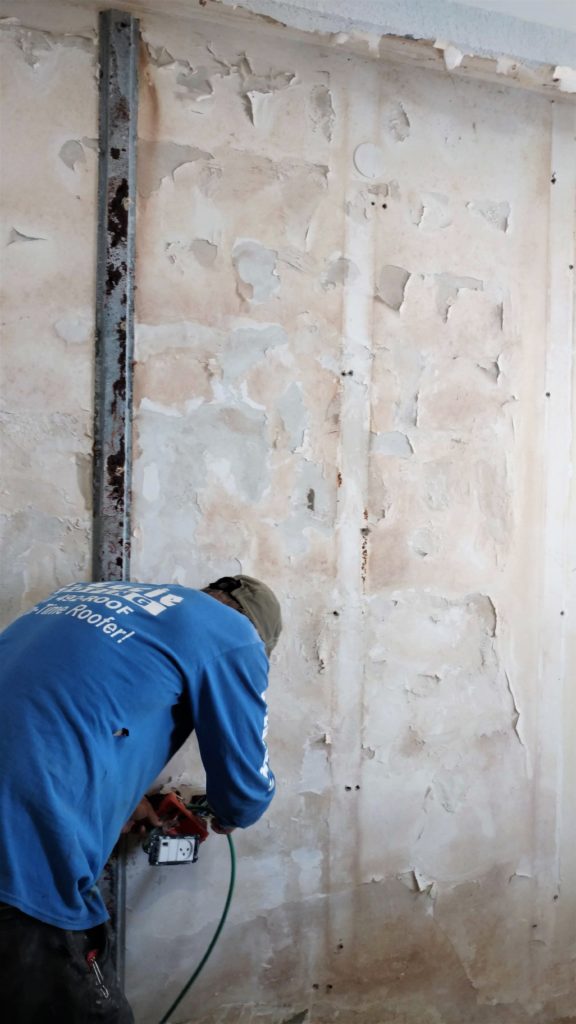 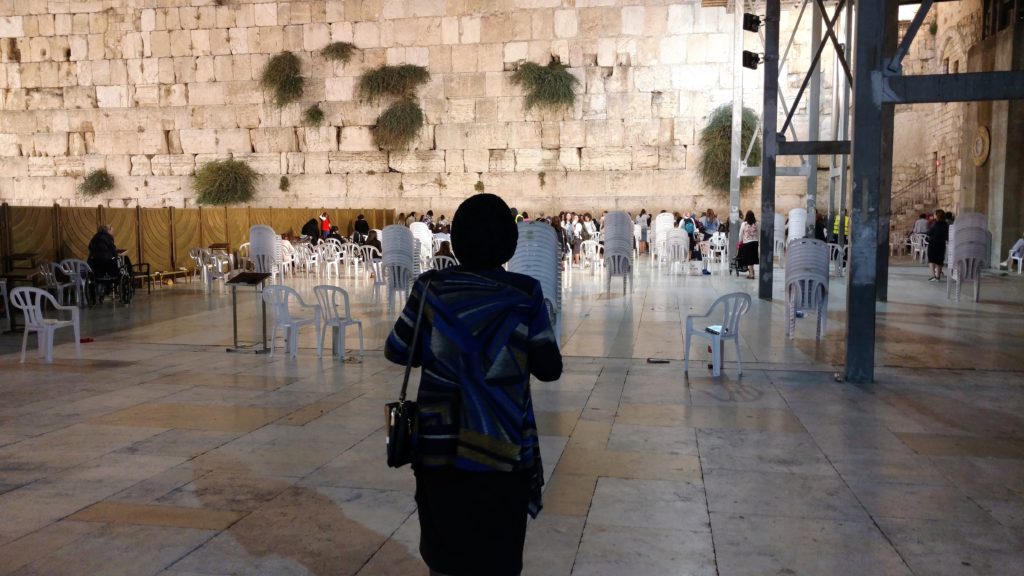