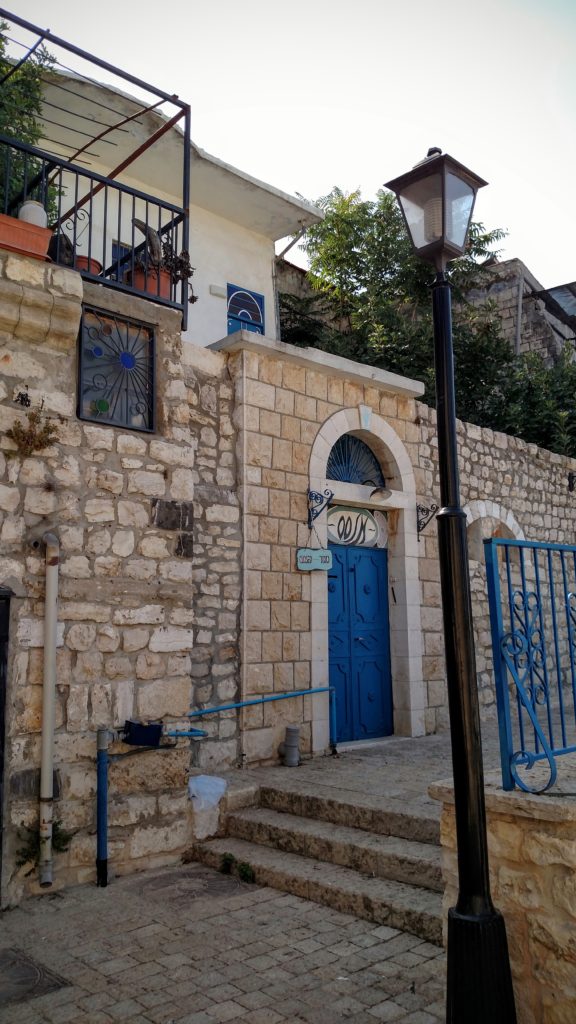 “To the nut garden I went down, to see the buds of the valley, to see — have the grapevines flowered, are the pomegranates sprouting? Without realizing it, my soul had brought me to the chariots of my noble people.”

We are renting a home in Tzfat in the Artists Quarter, a picturesque tangle of alleyways and courtyards with old, jumbled, off-kilter stone houses and apartments. Each structure is unique, with odd rooftop patios, secret gardens, dramatic outdoor stairways leading to upper stories. As I stood on our roof patio our first morning in Tzfat, looking out over the mountains, a next-door neighbor called and waved to me from a distance, from a high stairway behind our place. Elderly, tall, thin, in a morning robe with a cup a coffee, he invited us to come visit some time. He also directed me to his website – he’s an artist. I have to admit – much of the art we’ve seen in Tzfat is pretty commercial, but there are serious artists here as well, and when I checked out his website, it was clear – he is the real thing, serious, creative and accomplished. I saw him from a distance several times since and each time he called and invited us over, but we’ve been busy getting settled into the house, into the social support systems of Tzfat and into our work. Then late this afternoon he rang our doorbell – a brass bell with a string – and asked if this was a good time for us to come over. Of course!

His home has a wall and a secret garden, with the first floor as a gallery of his work. His name is Jan Avraham Menses and you can check out his website www.janmenses.com . He narrated his life for us as he showed us his pictures and paintings and memorabilia. Born in Holland in the 30’s to a Protestant family that came from Portugal in the late fifteenth century, he lived through the bombings of Rotterdam, first by the Nazis, then by the British, and lost close Jewish childhood friends rounded up during the Nazi occupation. Impressed by the lives and ethical integrity of the Jewish families he had met in his childhood, and drawn by empathy and compassion for the Jewish suffering he had witnessed, he converted to Judaism in his 20s, in Morocco. The Portuguese heritage of his family, back from the time when many Jews and Conversos of Portugal fled to Holland, gives him the feeling that his own conversion is a return to his Jewish soul root. He is a pious Orthodox Jew, much admired in the Chabad and Sephardic communities. He showed artistic talent early, and is a fine portrait artist. But he was drawn to an Expressionist style, to dark themes in black and white exploring the suffering and terror of the Shoah. He described his drive to paint the evil and suffering of the Shoah as a catharsis, an exorcism of the terror of his childhood. His middle period weaves Kabbalistic themes into his work. His latest period is still dominated by black and white canvases, but the theme has shifted to Tikkun. While living in Montreal with his wife and family, he achieved significant national and international recognition. Here in Israel, he is not as well-known.

He shared many stories of his life with us. Then he showed us one of his most unusual works and told us that one day, while he was painting in his garden, a Japanese woman came to the door and asked if she could see his gallery. Her face was veiled. He let her in and then went back to his painting. An hour passed and he suddenly remembered the woman was still in the gallery, so he went in to apologize and found her standing before this work. It’s a large triptych, from 1963, of three women, entitled Three Sisters. He had felt driven to paint three victims of Hiroshima. It’s a harrowing work, in color, combining his portraiture and expressionism. Their faces are disfigured, melted, scarred. Harrowing, yet achingly compassionate. The veiled woman had been still standing in front of this work for most of the hour, weeping quietly. When he approached she asked him “How did you know?” He was not sure what she meant. She asked “How did you know how we look? And how did you know I have two sisters?” He really hadn’t known. He felt driven to paint this work. He asked if she had a picture of her sisters. At first she said no. He asked again, gently. Then she took a photograph from a pocket near her heart and showed him. How did he know?

This week’s Parsha introduces the next generation of leaders of Am Yisrael. Pinchas, the new Kohen, succeeds Aharon HaKohen. The daughters of Tzelofchad succeed Miriam. Yehoshua succeeds Moshe Rabbenu.  Each of these new leaders earns their status by uncovering the hidden. Pinchas steps up to act when the correct halakhah for an emergency situation is hidden from Moshe. The daughters of Tzelofchad bring a revelation of women’s inclusion in inheritance law that had been hidden from Moshe. Yehoshua’s qualification for leadership also rests on his ability to uncover the hidden. When Moshe asks Ha-Shem to appoint a leader to succeed him, he appeals to Ha-Shem with an unusual address:

“May the Lord, God of the spirits of all flesh, appoint a person over the congregation.”

The descriptor “God of the spirits of all flesh” is striking – why that address in this context? Rashi explains:

“God of spirits – why is this said? He said before Him ‘Master of the World, it is revealed and known before You that the minds of each and every person are not the same. Appoint over them a leader who can carry each and every one according to their own mind.”

He shall be on the high level of the righteous and the exalted level of the Tzaddikim: he will see without an eye, and hear without an ear, and speak without a tongue and feel things without senses, and intuit without logical reasoning. He will not love anything or choose anything except that which the Creator chooses and hang his will on the Will of the Creator and love with His love.

What dark gravity draws a person to upend his life and convert to join a suffering people? What draws a person to create uncanny works of art out of the depths of human pain? What draws a person from half way around the world to the doorway of a private gallery hidden in a warren of alleyways to find herself and her sisters depicted in an agonizing and transfiguring work of art by a man who never met them? What draws us to this mysterious Land that embraces and nurtures such precious hidden souls?