A five-day program for exploring personal connections to Judaism for adults, open to men and women of all backgrounds

In the beautiful mystical city of Tzfat
In conjunction with Livnot U’Lehibanot
Details to follow!

While a gardener was working to connect a watering system to an old set of pipes in our house, one of the pipes inside the wall cracked, and the water started gushing. I have to admit I was pretty anxious. The plumbing in our home is all imbedded in the stone-and-concrete walls, typical construction here, and hard to access if a repair is necessary. We called a veteran plumber who had helped us with an emergency last winter, a real old hand, and he came right away. He assessed the situation and was also concerned – if the break was deep inside the wall, it would be a major job. He got out his tools, got ready to tackle it and said: “before we do anything, we better pray.” He didn’t say this as a quip; he was serious. He took a moment and we all prayed for a good outcome. Then he went to work. After a bit of drilling and some superb technique he was able to baby the pipe out and replace it, and the result was a much better system than before. In the course of the repair the plumber talked about his life, a tough life. He showed us his physical scars from the 1982 war in Lebanon and spoke about the impact of his emotional scars from PTSD. The talk was another kind of repair.

We needed to have electrical work done, and hired an electrician we met in Ulpan. He grew up in Communist Czechoslovakia, where his commitment to Judaism got him imprisoned in a hard labor camp for three years. He and his family suffered terrible hardships, came to Canada where they suffered even more hardships, and finally made Aliyah, living here in Tzfat where they just scrape by. He says he tries to live by the principle that rather than say “isn’t it terrible that roses have thorns,” say “isn’t it great that thorns have roses.” For him it’s no platitude. He knows the thorns.

We were talking with the gardener and a repair man about putting a door on the storage shed in the back, to keep the cats out. Feral cats were a nuisance in the Tzfat neighborhood we lived in last year, and they roam the neighborhood here, too. A certain tawny cat sleeps on one of our balconies like he owns the place. The gardener and the repair man both said “Oh no, you want the cats. They keep down the scorpions (we were greeted by one on our first day in the house) and the centipedes (just as dangerous, we had one on the second day) and the snakes (none, thank God).” Now we put out a little food by the garden – hello kitty.

In Midrash Vayikra Rabbah it says:

Rabbi Alexandri says “a layperson, if he uses broken vessels it’s an embarrassment for him. But the Holy One, blessed be He, the vessels He uses are broken, as it says “HaShem is close to the broken hearted (Ps. 34)…”

This principle stands at the heart of Rabbi Isaac Luria’s kabbalistic system: breaking is a necessary part of a process of higher repair. The Torah art of living is to learn how turn even negative encounters to positive advantage, or at least into a lesson learned. In the tight moral and spiritual ecosystem in which we live, every challenge and crisis also opens up an opportunity. How we take it determines whether the crisis leads to a blessing or a curse, as our parashah makes clear. Rabbi Simcha Bunam of Pruszyscha comments on the parashah that

the sins for which the curses come are mostly not publicized by the Torah. The only sin the Torah mentions is “because you did not serve HaShem your God in joy and goodness of heart from the abundance of all things (Dt. 28:47).”

It’s all in how we take it.

So it is that the Vidui Bikkurim at the beginning of the parashah, the verbal confession of thanksgiving that accompanies the bringing of first fruits from one’s orchard or field to the Beit HaMikdash, concludes with the promise “and you shall rejoice for all the good that HaShem your God has given you and to your household, you and the Levi and the stranger in your midst (Dt. 26:12).” The term “confession” is applied to the negative self-accounting we practice during the month of Elul and until Yom Kippur, in the sense of a statement of admission and acknowledgement. So, too, when we offer first fruits from the Land of Israel, we recount and acknowledge the history of divine blessings that has brought us to this moment and we confess our gratefulness for all the gifts God gives us, at every moment.

We’ve had a series of workmen come through the house in the last few weeks to do the inevitable repairs that need to be done to a newly-acquired home. At one point or another we’ve offered each one a glass of water or coffee, and every time, whether they are religious or not, before drinking they have said the blessing

Blessed are You… that all comes into being by Your Word.

This is really all we need to know.

Yes, we are deeply grateful for all the gifts HaShem has given us, amazing gifts. And maybe I’ll eventually learn to trust His process, and the way every twist and turn in our lives can open up opportunities for repair and healing and blessing.

It’s his. We couldn’t convince him otherwise 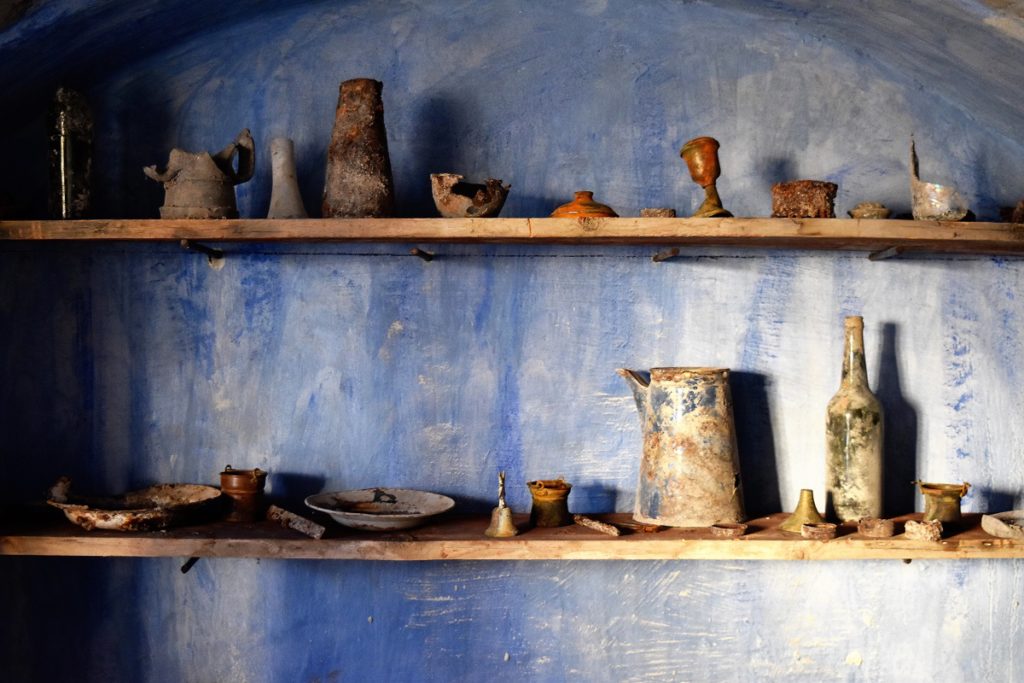 From the latest finds at the tunnels at Livnot U’Lehibanot

One thought on “Broken Vessels”