The other day a large snake slithered across a corner of our garden and disappeared behind a bush, possibly slipping into a crevice in the stone wall. We only got a quick glimpse. It was beige with a pattern of brown spots and our first thought was: Tzefa! It’s common enough in Israel, especially in rural areas like ours. Called the Tzefa Eretz-Yisraeli and the Palestinian viper, it’s one of the most poisonous snakes in the world. It’s the national snake of Israel — who knew there was a national snake? It’s also the subject of some political controversy, since the Palestinians claim it as their snake too, and accuse Israel of stealing their snake heritage. We called the animal control person and he came by and poked around but it didn’t show up. Trying to identify what we saw, he showed us some photos on his cell phone, and we realized that maybe it was a different snake, the Za’aman Matbe’ot, also large and beige but with a different pattern of brown spots. The animal control guy said “Oh — that’s a good snake — it’s not poisonous and it kills vipers. It’s a blessing to have in your garden.” Often our first response to a surprise threat is defensive, then, when we settle down, we can discover the blessings in a situation.

At the beginning of this week’s parashah, Balak, king of Moav, sees the Israelite camp approaching his territory and sends emissaries to hire the gentile prophet Bilaam to use his special skills to repulse them:

Now come, please, and curse this nation for me, for it is more powerful than me – perhaps I will be able to strike it and drive it from the land – for I know that whoever you bless is blessed and whoever you curse is cursed.

The Gemara, Zohar and commentary tradition regard the alliance of Balak and Bilaam as a deadly threat to Israel, though the parashah depicts them more as bumbling buffoons whose efforts to curse Israel are thwarted by Heaven at every turn. The commentary Beit Ramah asks a fundamental question:

Since Balak knows that “whoever you bless is blessed,” why did he hire Bilaam to curse Israel? Wouldn’t it have been preferable to hire him to bless Moav to be victorious in war?

A similar question can be asked of the current waves of protest that have been roiling the U.S. and Europe and Israel as well.

Popular protest can be a valuable and necessary corrective against injustice in the political process.  Here in Israel, even with the restrictions on large gatherings imposed due to the pandemic, among the notable official exceptions is political protest: as long as people maintain physical distance and wear masks there is no limit to the size of protests. Israelis insist on our inalienable right to kvetch.

Certainly there are very serious issues that demand protest. Black Lives Matter is powerful in its understatement — persisting racism and its lethal impact in Western societies is an urgent issue. But when protest against murder turns violent and leads to more murder, when protest takes on the destructive momentum of a tantrum unmoored from its original message, when what should be a call for respect and care for the lives of all vulnerable people and groups is hijacked and twisted by pro-Palestinian groups and turns anti-Jewish – it’s time for critical questioning. The cruel group-bullying typical of cancel culture is a modern incarnation of Balak’s poisonous passion to curse others, rather than find constructive approaches to build and strengthen through blessing. There are situations that justify strong protest, but we need a self-aware vigilance that ensures that our means and our ends are constructive and healing.

The Beit Ramah continues, that Balak’s drive to curse rather than bless comes from a blinding hatred that is ultimately self-destructive:

The essential intent of haters of Israel is not for their own welfare, but to harm Israel, and all their anger against Israel comes not from the love of their nation but from the hatred of Israel, and from their great hatred they wreck all sense of proportion and bring a curse upon their nation and land.

Here in Israel the Balak syndrome is found in the Palestinian leadership. Their stubborn refusal to negotiate in good reasonable faith, and their indoctrination of their populace, with a perverse focus on children, in violent hatred of Israel, has shackled their people in continual stagnation. They would rather curse and rage against Israel than work on developing the blessings of a just, constructive and peaceful society. They are also influencing the destructive political climate in the States — a “day of rage” was just held in Los Angeles, the typical Palestinian modus operandi.  Israel’s current debate over implementing explicit sovereignty over Israeli population areas of Yehudah and Shomron and over the Jordan Valley, whatever the pluses or minuses of the move, might have the virtue of getting the Palestinian leadership off its טוכעס to engage in constructive and serious negotiations.

Ultimately, Bilaam’s attempts to curse Israel against HaShem’s Will are not just thwarted but transmuted:

And this is powerful advice for each of us as well – not just to complain or wallow in self-pity and defensiveness, but to take positive action to help, to teach, to uplift, to transform negative situations into opportunities for constructive change and blessing. These are the positive challenges HaShem gives us throughout our lives:

I call Heaven and Earth to witness before you this day: life and death I have placed before you, the blessing and the curse, so choose life, that you may live, you and your children. 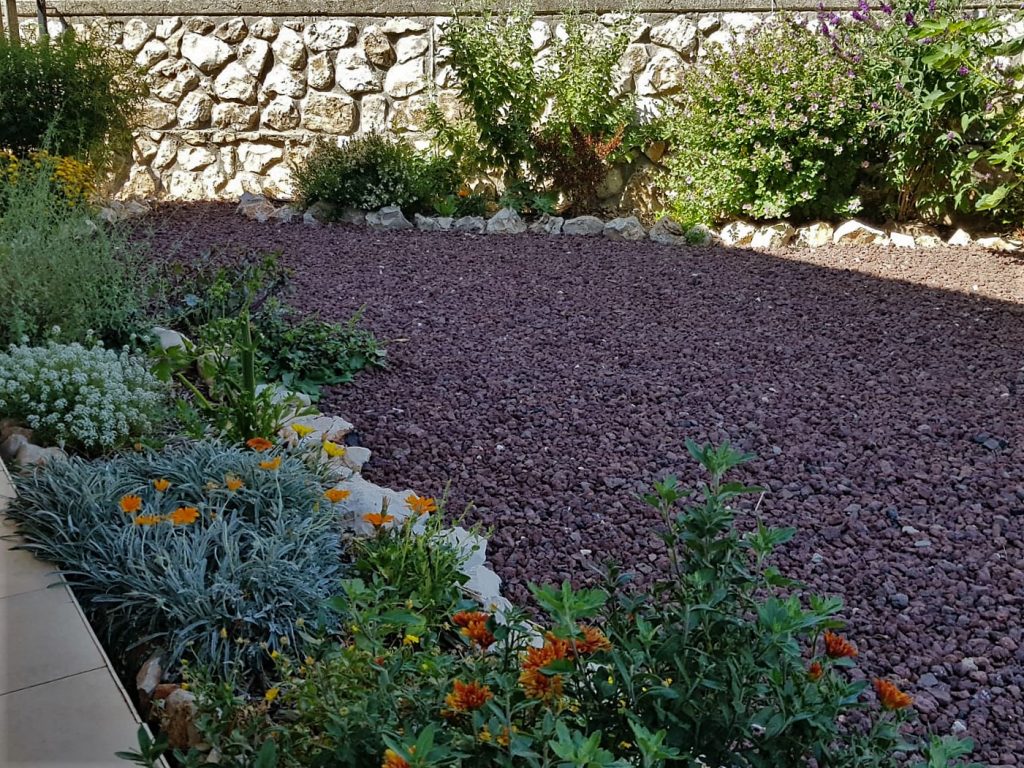 The left corner by the wall is where I spotted the snake. Garden at your own risk!